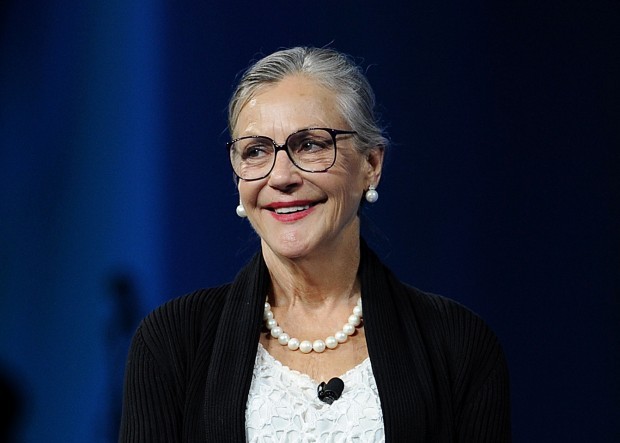 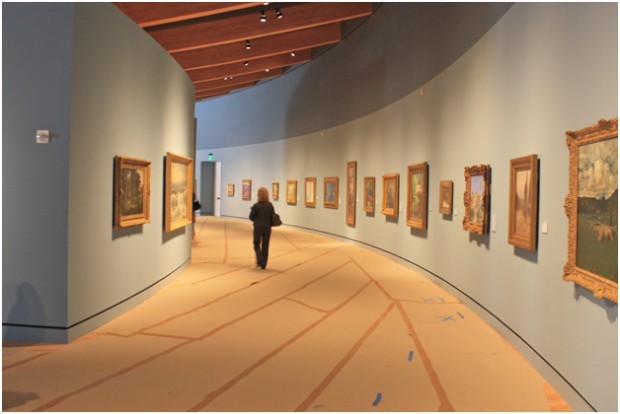 A view of 19th-century galleries at the Crystal Bridges Museum in Bentonville, Ark. The ceiling sweeps upward so that the roof meets the surrounding slope. The gallery curves to lead viewers through the five exhibition pavilions. Photographer: James S. Russelll/Bloomberg

Bankrolled by more than $1 billion in donations from her family, the Bentonville museum attests to the Waltons’ generosity and vast wealth. It’s also a monument to their skill at preserving that fortune across generations.

America’s richest family, worth more than $100 billion, has exploited a variety of legal loopholes to avoid the estate tax, according to court records and Internal Revenue Service filings obtained through public records requests. The Waltons’ example highlights how billionaires deftly bypass a tax intended to make sure that the nation’s wealthiest contribute their share to government rather than perpetuate dynastic wealth.

The law provides for a 40 percent tax that is levied at death on estates of more than $5.25 million for an individual or $10.5 million for a couple. Total lifetime giving to heirs that exceeds those thresholds is also taxed at 40 percent, preventing people from avoiding the estate tax through early handouts. But thanks to loopholes, estate and gift taxes raised only about $14 billion for the government last year, about 1 percent of the estimated $1.2 trillion passed down in America each year.

Alice Walton’s mother and brother poured more than $9 billion into trusts since 2003 that fund charitable projects such as Crystal Bridges and are also designed to protect gifts to heirs from taxation. Another Walton pioneered a tax-avoidance maneuver that is now widely used by U.S. billionaires.

Spurred by historically low interest rates that magnify the tax savings, the richest Americans have amassed at least $20 billion in trusts like those used by the Waltons. They include Elaine Marshall, the Koch Industries Inc. director, and Fidelity mutual funds’ Johnson family.

Closing just two estate tax loopholes — ones that the Waltons appear to have used — would raise more than $2 billion annually over the next decade, according to Treasury Department estimates. That doesn’t count taxes lost to the type of charitable trusts the Waltons used to fund projects like the museum; the department hasn’t estimated that cost.

Guarding the Waltons’ wealth as it passes from one generation to the next is the task of a handful of staffers laboring in an unmarked suite in Bentonville, above a bike shop called Phat Tire. Walton Enterprises LLC manages the world’s biggest fortune in a nondescript office that even employees of the coffee shop next door have never heard of.

The family’s estate-planning efforts are well shielded. The wills of Alice’s parents, Sam and Helen, on file in an Arkansas probate court, reveal little about their financial arrangements. That of her brother John, who died in 2005, was sealed by a Wyoming judge.

Still, professional planners have sometimes held up the Waltons as a model. Patriarch Sam Walton, who founded Wal-Mart in Bentonville, cultivated an image as a regular guy from Oklahoma who enjoyed quail hunting and drove a beat-up Ford pickup. He also showed unusual foresight about estate planning.

According to his autobiography, “Made in America,” Sam Walton started arranging his affairs to avoid a potential estate tax bill in 1953. His five-and-dime-store business was still in its infancy and his oldest child was 9. That year, he gave a 20 percent stake in the family business to each of his children, keeping 20 percent for himself and his wife. “The best way to reduce paying estate taxes is to give your assets away before they appreciate,” he wrote in the book.

Sam’s retailing success made his family the richest since the Rockefellers, who themselves were pioneers in estate-tax avoidance. As soon as the tax was enacted in 1916, John D. Rockefeller, then the world’s richest man, circumvented it by simply giving much of his fortune to his son. Congress closed that loophole eight years later by adding a parallel tax on living gifts to heirs.

At the end of the 1990s, an effort to repeal the estate tax gathered force, supported by a group of billionaire families and their lobbyists at Patton Boggs LLP, a Washington law firm.

Walton Enterprises paid Patton Boggs to lobby on tax matters during that time.

A Patton Boggs lawyer, Aubrey Rothrock, said in a statement that the Waltons’ lobbying supported “private foundation reforms to create new incentives for charitable giving” and did not involve “the specific issue of repealing the estate tax.”

Aided by Democrats such as Blanche Lincoln, an Arkansas senator, congressional Republicans in 2001 passed a temporary measure that would phase out the tax over 10 years. The tax was restored in 2011.

As a senator, Lincoln was one of the few Democrats to whom the Waltons donated. She’s now a lobbyist whose clients include Wal-Mart.

Alice Walton, the youngest of Sam and Helen’s four children, is among Lincoln’s contributors. Alice, 63, is a former money manager who founded and ran her own financial firm, Llama Co. She now lives on a ranch in Texas known as the Rocking W., where she raises award-winning cutting horses and collects art.

In 2005, Walton grabbed the art world’s attention with a series of purchases. Spending as much as $35 million for a single work, she quickly amassed the collection that would form the basis of Crystal Bridges.

On a bright November day in 2011, Alice Walton stepped up to a lectern to christen her new museum. Sunglasses shielding her eyes, she thanked just about everyone else who had played a role in its construction.

“This project exemplifies the way one single gift grows and becomes greater, as many more give generously,” she said in her Ozarks twang.

She didn’t mention one side-benefit of the gifts — estate tax avoidance. Most of the money for Walton’s museum — more than $1 billion, including endowments — came from the Walton Family Foundation, the family’s main charitable arm, which also spends hundreds of millions of dollars a year on education reform and environmental protection.

The foundation, in turn, is funded mostly by a series of 21 trusts. Sam Walton’s widow, Helen, to whom the family land where the museum stands is dedicated, set up four of the trusts in 2003. Her estate established 12 more after her death in 2007. Her son John, who died in an ultra-light plane crash in 2005, provided for five more in his estate.

These trusts are often called “Jackie O.” trusts after Jacqueline Kennedy Onassis, the former first lady who died in 1994 and whose will called for one. According to IRS data, the Waltons are by far the biggest users of Jackie O. trusts in the United States.

The money put into these trusts is ostensibly for charity. If the assets appreciate substantially over the years, though, the trusts have another desirable feature: They can pass money tax-free to heirs.

A donor locks up assets in these trusts, formally known as charitable lead annuity trusts, or CLATs, for a period of time, say 20 or 30 years. An amount set by the donor is given away each year to charity. Whatever is left at the end goes to a beneficiary, usually the donor’s heirs, without any tax bill.

The type of Jackie O. trust used by the Waltons doesn’t generate a break on income taxes. Instead, the big potential saving is on gift and estate taxes. When a donor sets one up, the IRS assesses how much gift or estate tax is due, based on how much of the trust’s assets will end up benefiting charity and how much will go to heirs. Most donors structure the trusts so that the heirs’ estimated leftover is zero or close to it.

The IRS makes its estimate using a complicated formula tied to the level of U.S. Treasury bond yields during the time when the trust is set up. If the trust’s investments outperform that benchmark rate, then the extra earnings pass to the designated heirs free of any estate tax. The rate has been hovering near all-time lows since 2009. For trusts set up this month, it’s 1.4 percent.

With a big enough spread between the actual performance and the IRS rate, a Jackie O. trust can theoretically save so much tax that it leaves a family richer than if it hadn’t given a dime to charity.

Alice’s mother, Helen, chose an auspicious time to set up her first four Jackie O. trusts in January 2003. The IRS rate of 3.6 percent was the lowest since 1970, and Treasury yields rose the next month.

Those trusts can save taxes only if they beat that 3.6 percent rate. From 2007 to 2011 — the years for which the IRS provided public copies of the trusts’ tax returns — they did so handily.

The trusts returned about 14 percent a year before taxes during that period, according to a Bloomberg analysis of IRS filings. That growth means the four Helen Walton trusts have been accumulating assets faster than they give them away. As of 2011, they held a combined $2 billion, up from $1.4 billion in 2007.

Barring a stark reversal of fortune, at least that much money will probably pass to Helen Walton’s heirs.

While the Waltons’ savvy use of the tax law may have left less for the government, residents of Bentonville are gladly reaping the benefits.

Crystal Bridges museum welcomed its millionth visitor last month, far earlier than anticipated. Maureen Seymour, 64, from nearby Bella Vista, volunteers in the museum because “it’s a happy place,” she said. “We have a lot of people here who have never seen a museum, ever.”

As for the tax implications of the Waltons’ philanthropy, “I’m not privy to all that.” Seymour said. “I think about what it’s done for the community. Think of all the jobs they’ve created, at all levels. The Waltons have been very, very generous.”

Jack Taylor family of Enterprise Rent-A-Car and Rams owner Stan Kroenke among Missourians on the list.

Initiative involves mayors of 65 riverfront cities and towns in 10 states, including St. Louis.

A view of 19th-century galleries at the Crystal Bridges Museum in Bentonville, Ark. The ceiling sweeps upward so that the roof meets the surrounding slope. The gallery curves to lead viewers through the five exhibition pavilions. Photographer: James S. Russelll/Bloomberg