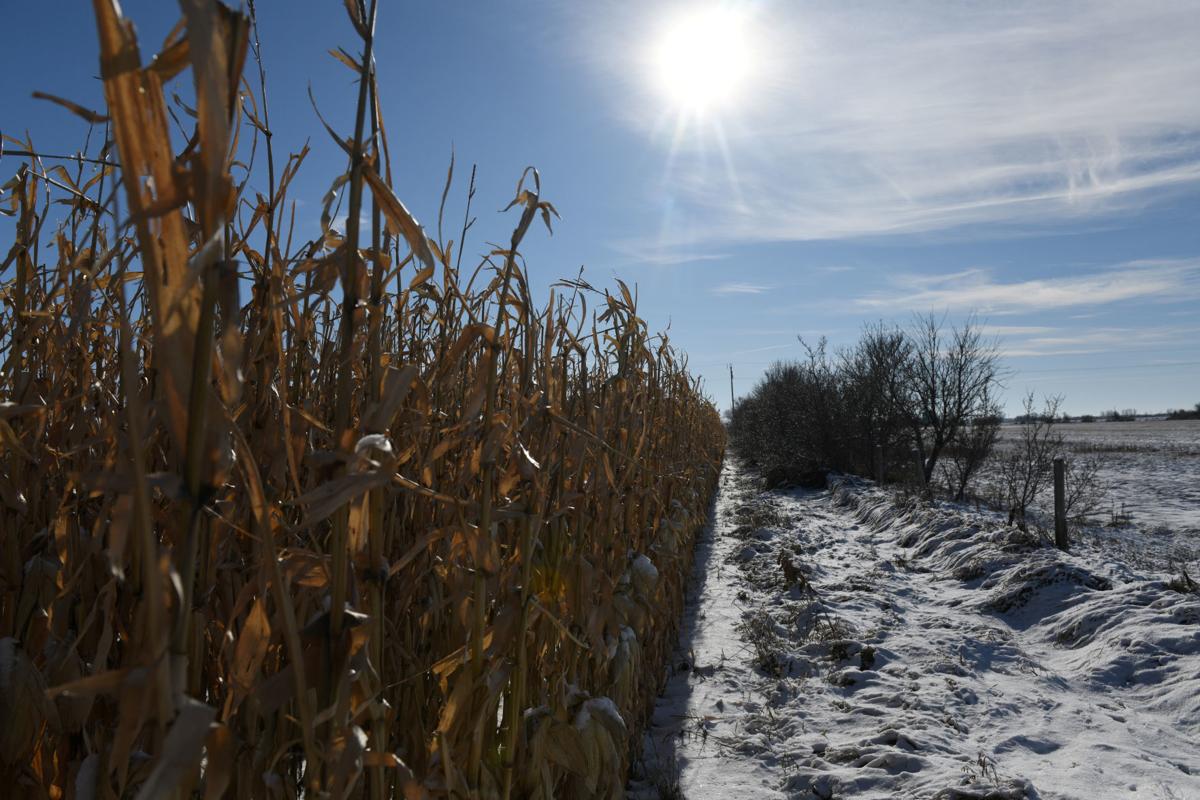 Frozen corn is seen on a farm near East Grand Forks, Minn., on Nov. 22, 2019. REUTERS/Nicholas Pfosi 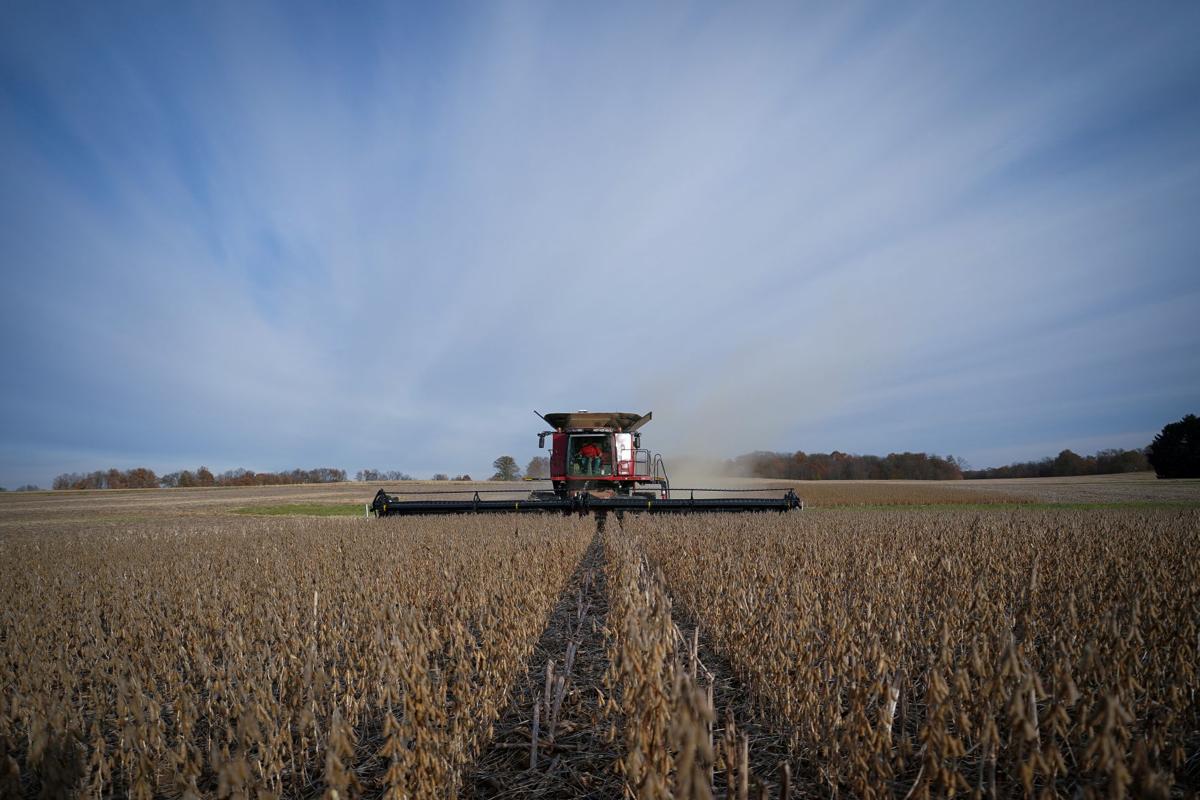 Soybeans are harvested from a field on Hodgen Farm in Roachdale, Ind., on Nov 8, 2019. REUTERS/Bryan Woolston/File Photo

CHICAGO — Across snow-covered North Dakota, U.S. farmers are stuck with fields full of weather-damaged corn — a crop they planted after the U.S.-China trade war killed their soybean market. Many don’t know yet what crops they’ll plant next season among a host of dicey options.

In Texas, Kansas and Colorado, farmers are weighing whether they should plant fewer acres of corn and more sorghum, even though China has all but stopped buying it. That’s because sorghum costs about half as much as corn to plant, which appeals to farmers wary of investing too much for an uncertain return.

As the U.S. farm economy reels from the worst harvest in decades after nearly two years of the trade war, U.S. grain growers are struggling to decide what crops might keep them in business.

President Donald Trump announced last month that China had agreed to double its pre-trade war purchases of U.S. agricultural products over the next two years as part of a Phase 1 trade deal. That brought little comfort to U.S. farmers because China still has not confirmed the commitment or signed any deal.

“President Trump said that we’re all going to need to go buy bigger tractors,” said North Dakota farmer Justin Sherlock. “I don’t think many farmers are going to invest much money until we see that this is a done deal and a long-term deal.”

Trump administration officials say the Phase 1 trade deal with China will be signed in January, though many tariffs will remain in place during further negotiation. Commodity market analysts and agricultural economists warn an agreement won’t be an immediate fix for the U.S. farm economy because the conflict has spurred China to develop new supply chains.

China has, for instance, deepened ties with rival exporters such as Brazil and Argentina. Brazilian soy cultivation is expanding after record exports to China in the past year and China is investing in South American ports.

Making matters worse, China’s need for soy and sorghum to feed livestock is waning because of a deadly pig disease that experts estimate has killed off about half the world’s largest hog herd. China’s hog industry has also worked to reformulate pig rations to include less soy and more alternative feeds that don’t have to be imported from the United States.

“We won’t go immediately back to where we were 18 months ago — maybe not for a long time,” Jay Debertin, chief executive officer of CHS Inc., the largest U.S. farmer cooperative, told grain producers at a recent conference in North Dakota.

Many U.S. farmers have tried shifting crops to dodge the economic fallout from losing such a crucial export market. They planted 76.5 million acres of soybeans in 2019, 14.3% fewer than the previous year, according to the latest U.S. Department of Agriculture data. U.S. plantings of sorghum — used in livestock feed and the fiery Chinese liquor baijiu — dipped about 7.5% in 2019, to 5.3 million acres. Plantings of cotton have dropped, too, as China pulled back on purchases.

Plantings of such China-dependent crops likely would have fallen much further were it not for the Trump administration’s allocation of $24.5 billion in aid to compensate farmers for trade-war losses. The bailouts gave many farmers an incentive to keep planting crops such as soybeans that they knew would be difficult to sell at any profitable price. Government handouts are expected to account for nearly a third of 2019 net farm income, according to federal government and bank regulatory data.

Trump administration officials have not said if farmers will get more payments in 2020. Robert Johansson, chief economist at USDA, told Reuters he expected the interim trade deal would solve the issues that the aid program had addressed.

Farmers in export-dependent regions say they can’t continue to sell their crops for below the cost of production without a third round of subsidies to cover the losses.

“If the government doesn’t pay us, we’re done,” said Sherlock, who did not vote for Trump in 2016 and remains undecided for 2020.

Most farmers have backed the president as he seeks re-election, according to polls by Reuters and farm media outlets. In 2016, they were drawn to Trump’s promise to shake up Washington bureaucracy and hoped the trade war, although it might bring short-term losses, would eventually improve the size and scope of China’s U.S. agricultural purchases.

Farmers last season intended to use more of their land for corn — a crop aimed at markets outside China — but that backfired for many growers when extreme weather prevented planting on millions of acres. Early seed orders for 2020 suggest farmers will again turn to corn to replace soybeans, China’s largest agricultural import. Scott Beck — president of Beck’s Hybrids, the largest family-owned U.S. retail seed company — told Reuters that sales of corn seed for 2020 planting are already up about 40% from 2019.

Sherlock and many of his neighbors last spring sowed one of North Dakota’s largest-ever corn crops by acreage. They were enticed by rising springtime prices and the promise of trade aid as long as they planted something. They figured their corn would find buyers among domestic livestock or ethanol producers or in established export markets such as Japan, South Korea or Mexico. But bad weather left almost 60% of the state’s corn — about 2 million acres — unfit for harvest at winter’s onset, according to USDA.

Many growers are caught in limbo. Their fields are not bad enough to trigger crop insurance payouts but not good enough to recoup costs. And trade-aid payments for North Dakota are not robust enough to cover losses, with larger per-acre aid payments flowing to southern states.

Sherlock says he might contract to grow more soybeans for a local seed company, a niche crop that costs more to grow but could reap higher prices. Field peas, used in grain-free pet foods, are another option.

Iowa corn and soybean farmer Mitchell Hora is also seeking alternatives. He sowed winter wheat and rye in fall of 2018 and sold the cleaned seed to fellow producers, and has more recently contracted to sell rye to a start-up malting company.

“The agricultural system is completely broken” because of the trade war, severe weather and mounting farm debt, Hora said. “We have to farm smarter.”

Farmers in the High Plains of Texas, the second-largest sorghum-producing state, also face hard choices. China’s imports of U.S. sorghum in 2019 were less than one-tenth of the volume purchased four years earlier, according to the most recent government data.

Still, the production cost for an acre of sorghum in this heavily irrigated region will be about half the cost of planting corn, according to Texas A&M AgriLife Extension data. Farmer Robert Boozer of Dimmitt, Texas — who grows cotton, corn and sorghum — said he and his neighbors pray for a time when the trade war no longer factors into planting decisions.

He’s agonizing over the per-acre costs of different crops and the break-even selling prices he’ll need to stay afloat. For now, he’ll plant more sorghum — “the best option in a field of terrible options.”

Frozen corn is seen on a farm near East Grand Forks, Minn., on Nov. 22, 2019. REUTERS/Nicholas Pfosi

Soybeans are harvested from a field on Hodgen Farm in Roachdale, Ind., on Nov 8, 2019. REUTERS/Bryan Woolston/File Photo