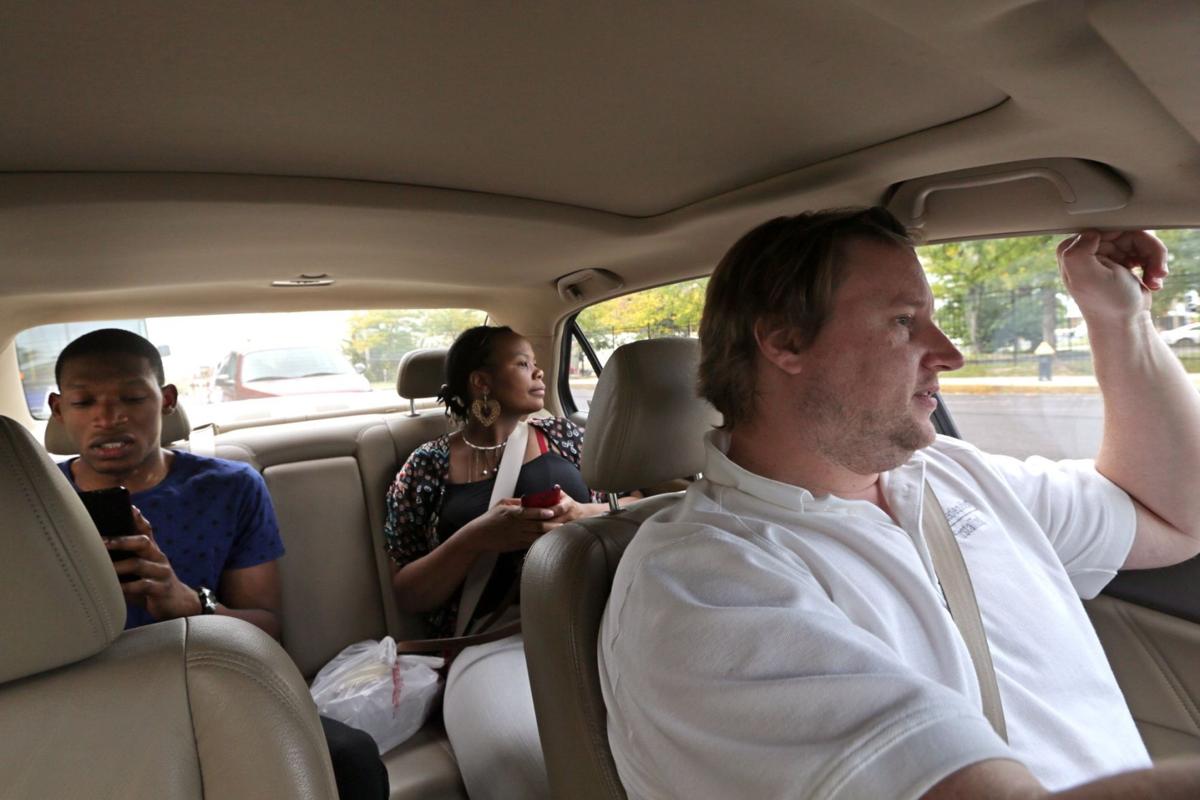 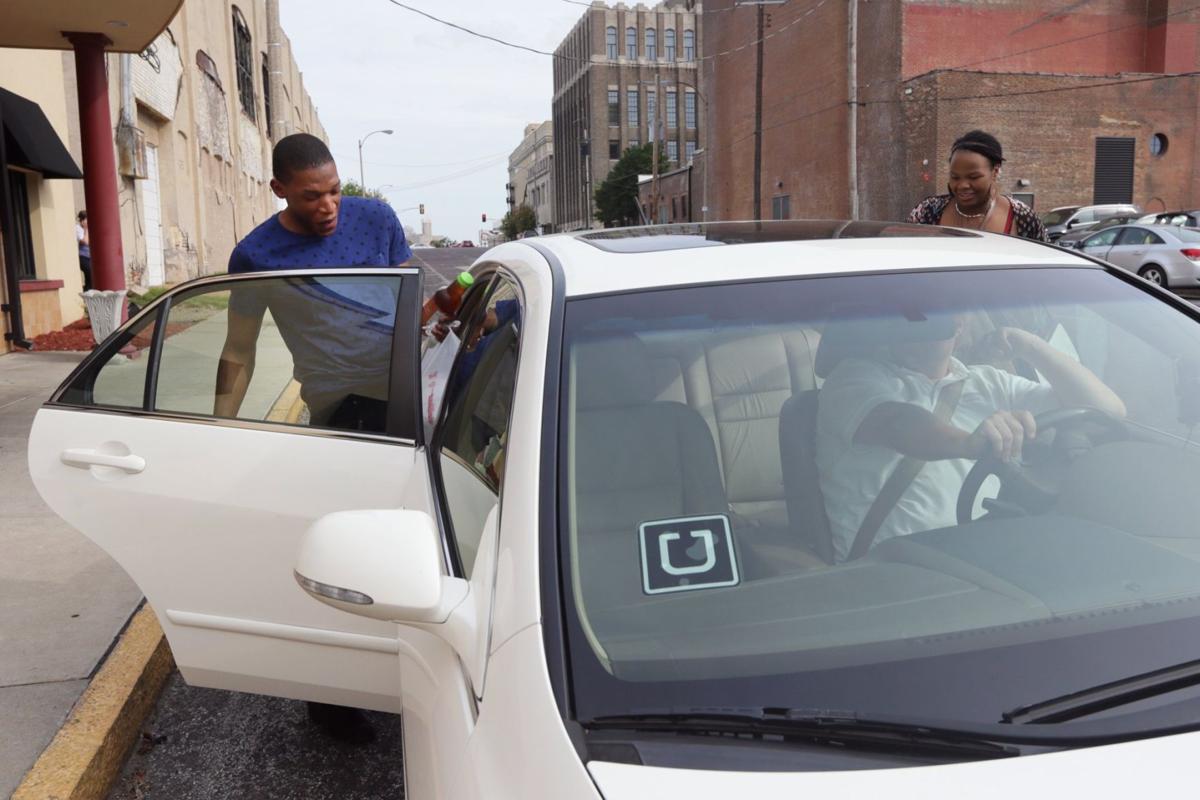 UberX driver Ryan Halinski, 33, of Chesterfield, gives a ride to Daniel J. Gore (left), 25, of Stratford, Conn. and Simona Selamwit, 22, of Warren, Ohio, on Friday, Sept. 18, 2015, UberX's first day of operation in St. Louis. Gore and Selamwit work for American Cruise Lines and got a ride to try out the food at Sweetie Pie's on Delmar. Photo by Cristina M. Fletes, cfletes@post-dispatch.com 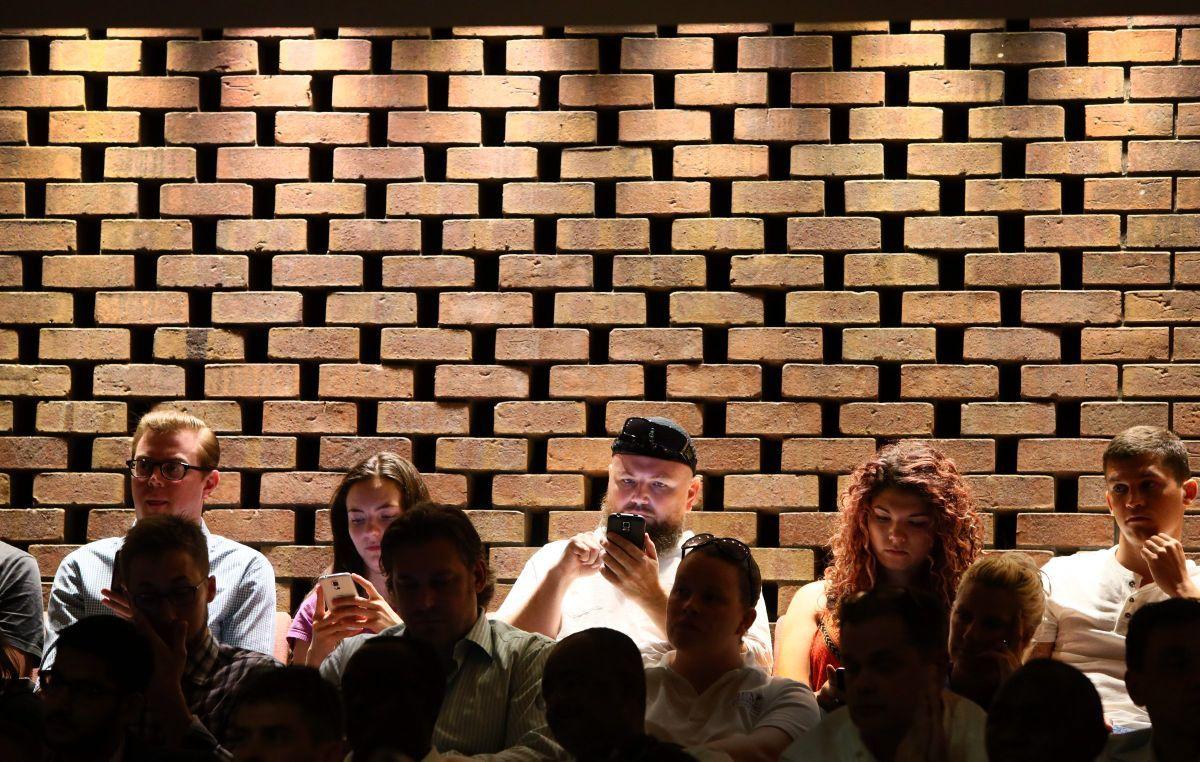 Taxi driver Umar Lee (center) sits among UberX supporters during a meeting of the St. Louis Metropolitan Taxicab Commission at St. Louis Community College at Forest Park on Wednesday, July 29, 2015. A vote on the ride service was delayed by the commission. Photo by Robert Cohen, rcohen@post-dispatch.com 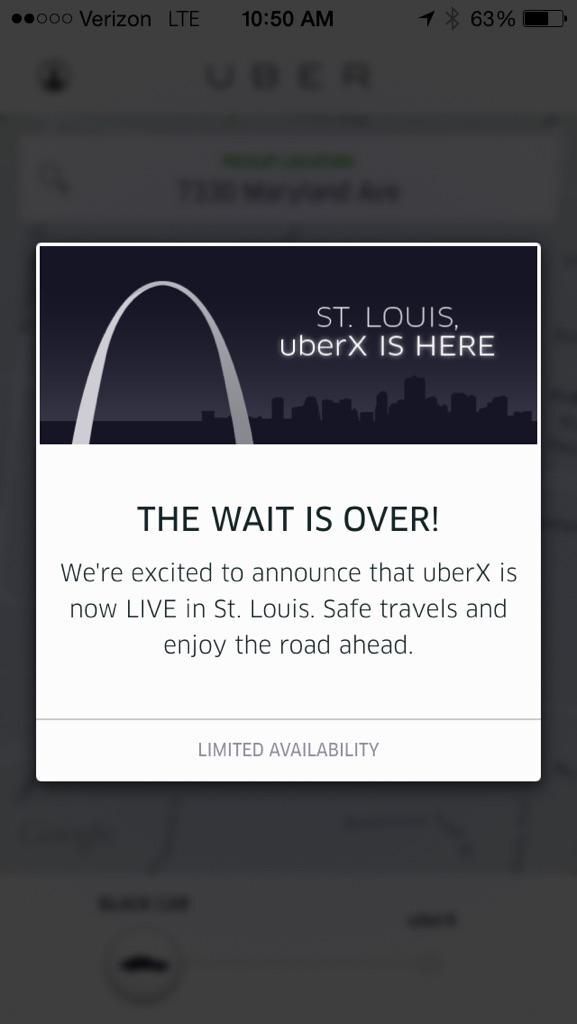 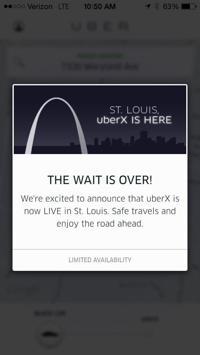 Uber users in St. Louis who opened the app on Friday, Sept. 18, were greeted with this message. 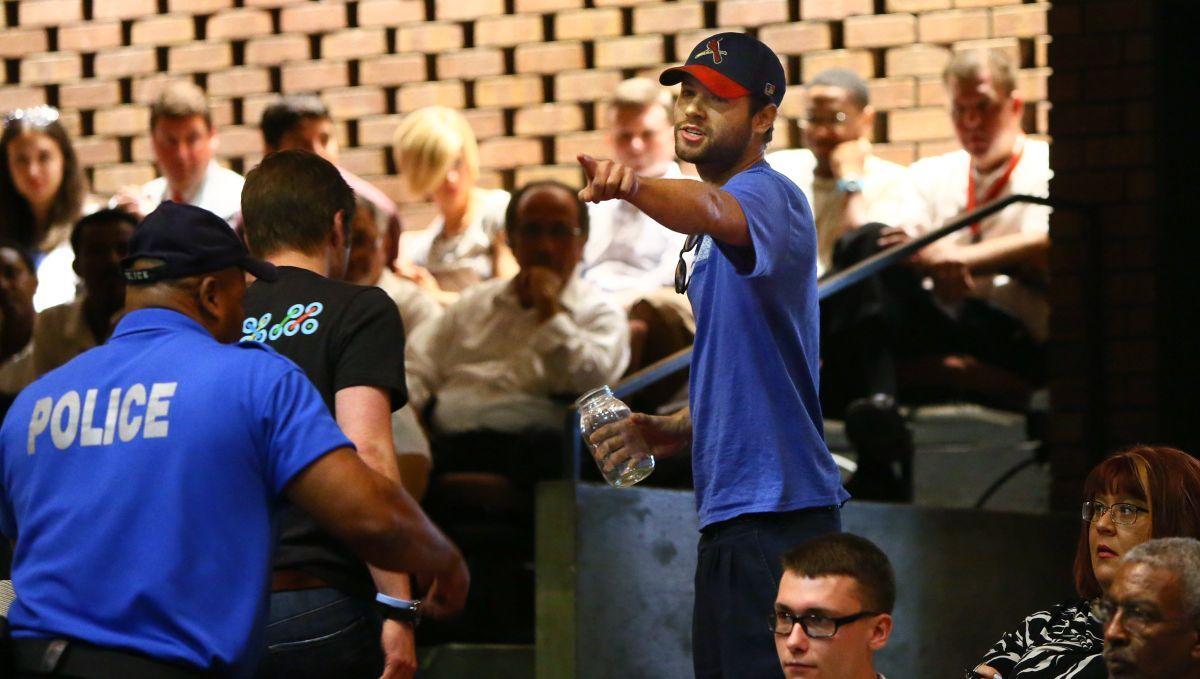 An unidentified man was ejected from a meeting of the St. Louis Metropolitan Taxicab Commission as a vote to allow UberX to operate in St. Louis was delayed during the meeting at St. Louis Community College at Forest Park on Wednesday, July 29, 2015. Photo by Robert Cohen, rcohen@post-dispatch.com

The long-awaited approval of ride-hailing did not mend the divide over what rules such services must follow, and Uber signaled it wasn’t backing down as its drivers took to the streets in violation of the new regulations.

The St. Louis Metropolitan Taxicab Commission voted 7-1 on Friday to allow such services with the requirement that drivers be fingerprinted as part of a criminal background check — a mandate that Uber says is an onerous burden for its drivers.

The commission’s decision was one Uber had been prepared to counter. Without waiting to see what was passed, the company launched service in St. Louis and St. Louis County, where the commission governs vehicles for hire, on Friday morning.

And minutes after the meeting began, the company filed a federal lawsuit against the taxi commission alleging anti-competitive practices in violation of the Sherman Antitrust Act.

The suit sought a temporary restraining order to allow the ride-hailing service to operate freely and without any commission regulations for two weeks.

U.S. District Judge Henry Autrey denied late Friday the request for the temporary restraining order but did not rule on the merits of the case.

“The fact that drivers and riders may prefer the Uber platform does not rise to the level of irreparable harm,” Autrey wrote in his ruling.

He also wrote that public interest favored the taxi commission, and that “fingerprinting and licensing requirements are crafted to maintain the caliber and reliability of the drivers.”

In its lawsuit, the San Francisco-based company wants the federal court to prevent the commission from conducting its allegedly anti-competitive practices.

The company called its legal moves “a last resort to provide residents with the same transportation options they have in other cities.”

Uber says St. Louis was the largest metropolitan area in the country not to allow UberX, an app-based ride-hailing service in which drivers use their own cars to ferry passengers.

Uber alleges the taxi commission has acted to protect its financial interest at the expense of the public.

In addition, Uber wants the federal court to force the commission to be restructured to prevent taxi industry members from “controlling” the regulatory body.

“When I’m in other cities, I have the freedom to Uber whenever I want. I deserve to have the same transportation options in St. Louis that people have in other cities,” said Marsha Robyn Wallen, one of the plaintiffs, in a statement. She is legally blind and relies on taxi and paratransit services for transportation.

State law requires that four members of the commission, which includes eight members and a chairman, be from the local taxi industry. Three members currently are, but a taxi driver is supposed to be on the commission as well. That spot has been vacant since August 2013.

In the Friday vote, only Chris Sommers, an Uber supporter and restaurant owner, voted against the rules requiring fingerprints.

Members of the commission are appointed by County Executive Steve Stenger and Mayor Francis Slay, who have been at odds on how to govern Uber.

Slay’s office drafted a proposal to allow Uber to operate without fingerprint checks, but commissioners shot it down Friday, with only Sommers voting for it.

Slay was disappointed by the vote, said Mary Ellen Ponder, his chief of staff. She said Slay was not interested in encouraging police to ticket Uber drivers, saying officers had better things to do with their time.

The police department echoed that sentiment.

“The department has greater concerns than citing or arresting Uber drivers. We will leave it up to the courts to determine the legality of Uber services,” a St. Louis police spokeswoman said.

“I strongly support Uber and its competitors operating in St. Louis County but they must operate legally. Uber is now operating in violation of state law and their drivers will be cited accordingly,” Stenger said in a statement.

One reason for Stenger’s support is the new regulations are in line with a state law specific to St. Louis and St. Louis County that requires vehicle-for-hire drivers to undergo the fingerprint checks.

To expedite those background checks, the commission recently bought high-tech fingerprint scanners that drivers can use at its office, and that provide a result in 15 minutes or less.

Chairman Lou Hamilton and other commissioners stressed Friday that the state law didn’t allow them to waive the fingerprint requirement.

“We have no authority to change that,” Hamilton said. “It’s a legislative issue.”

That’s why Stenger and St. Louis County Police Chief Jon Belmar decided Uber drivers in St. Louis County will be ticketed for driving a vehicle for hire without being licensed by the taxi commission, said Cordell Whitlock, Stenger’s spokesman.

But police would have to stop them on probable cause for a separate reason, a police spokesman said.

That decision frustrated Ryan Halinski, an Uber driver who said he was the first to hit the streets in the St. Louis area on Friday morning in his 2006 Honda Accord hybrid.

“It’s time for the county to look out for citizens and not special interests,” he said.

The Chesterfield man is a full-time Uber driver who previously had to work just in Illinois, where ride-hailing is legal under state law.

He said he’ll keep driving in St. Louis County, and that he’d never been as busy as he was Friday.

“I haven’t had more than four or five minutes between fares,” said Halinski, 33, in the late afternoon.

Lamine Dhiam, 40, also has been driving for Uber in the Metro East, and he’s pleased the company is offering the service on the Missouri side of the Mississippi River.

“Right now, jobs are very tough,” he said. “This is all I do right now. That’s why I was very happy.”

He also was keeping busy ferrying passengers, and he would have no problem being fingerprinted if that’s what is ultimately required for Uber drivers.

Uber said more than 1,900 drivers had passed Uber’s background checks and were cleared to drive here. The company also said 58,000 people in the St. Louis area had downloaded the app.

And this isn’t a temporary move — the company said it’s here to stay.

Adam McNutt, president of Laclede Cab Co., said Uber had not hurt his business on Friday and that cabdrivers had been busy.

And Neil Bruntrager, the attorney who represents the taxi commission, defended the actions of the commission.

“Their argument is we’ve made it impossible for them to enter the market. Look at what we passed versus what existed in the code,” Bruntrager said. “We’ve given them such an uneven playing field (over cabdrivers) that it’s the other way around.”

Uber is represented by Jim Bennett of the Dowd Bennett law firm in Clayton. Bennett did not return a call Friday seeking comment.

April 18: Lyft, another app-based service, launches in St. Louis when it was not authorized to operate, but its drivers are ticketed. A judge shuts it down after just a few days.

March 27: UberX, which is allowed in Illinois by state law, begins service in Madison and St. Clair counties.

July 7: Nine boxes — each purportedly carrying 1,000 petitions in support of UberX being allowed to operate in St. Louis and St. Louis County — are delivered to the taxi commission, but eight contain bottled water.

July 29: A taxi commission meeting ends with no vote on ride-hailing services because the two sides are too far apart.

Sept. 18: Commissioners vote to allow ride-hailing services, as long as drivers are fingerprinted. Uber refuses to do so and launches service anyway, also files lawsuit.

Editorial: The mayor shouldn't get to decide what laws are enforced

Butterflies, Uber, NFL --- all good. But they should operate legally.

Courts in Italy, Spain and Germany have already outlawed the service because it did not conform with local transportation rules

The ride-hailing service is protesting the proposed regulations

Plaintiffs blame Uber for business dropping by up to 40 percent

Whether the company will launch service in the St. Louis area remains to be seen

His departure follows resignation of Lou Hamilton, a foe on the commission

Editorial: Uberizing the Missouri Legislature is a bad idea

High on the list of bad ideas for the new year is turning over to the Missouri General Assembly the regulatory reins for taxicabs and ride-sharing services — in particular the nearly ubiquitous Uber — in the St. Louis region.

Unless taxpayers want to hear the sound of ka-ching as Uber lobbyists work the for-sale legislators in Jefferson City, this is an idea that ought to be dumped asap.

Taxi commission trucks on as some try to end it

Uber has been criticized over driver screening

Vote on statewide rules for Uber could be filibustered

Sen. Joe Keaveny, D-St. Louis, says he'll stall a vote on the Senate floor unless his concerns are addressed

Twitter users react to the announcement that Uber will start service in St. Louis.

UberX driver Ryan Halinski, 33, of Chesterfield, gives a ride to Daniel J. Gore (left), 25, of Stratford, Conn. and Simona Selamwit, 22, of Warren, Ohio, on Friday, Sept. 18, 2015, UberX's first day of operation in St. Louis. Gore and Selamwit work for American Cruise Lines and got a ride to try out the food at Sweetie Pie's on Delmar. Photo by Cristina M. Fletes, cfletes@post-dispatch.com

Taxi driver Umar Lee (center) sits among UberX supporters during a meeting of the St. Louis Metropolitan Taxicab Commission at St. Louis Community College at Forest Park on Wednesday, July 29, 2015. A vote on the ride service was delayed by the commission. Photo by Robert Cohen, rcohen@post-dispatch.com

Uber users in St. Louis who opened the app on Friday, Sept. 18, were greeted with this message.

An unidentified man was ejected from a meeting of the St. Louis Metropolitan Taxicab Commission as a vote to allow UberX to operate in St. Louis was delayed during the meeting at St. Louis Community College at Forest Park on Wednesday, July 29, 2015. Photo by Robert Cohen, rcohen@post-dispatch.com