ST. LOUIS — For more than a century, association with the Order of the Veiled Prophet has been the mark of elite wealth and power in St. Louis. A secret society, it has been run by some of the top business executives and patriarchs in the region. And, every year, it hosts an $800,000 ball, of white gloves, tuxedos and elegant gowns, in honor of its work.

But for the past two weeks, social media has made association with the Veiled Prophet a badge of shame.

Twitter came for actress and former VP debutante queen Ellie Kemper over Memorial Day, calling her a “KKK princess” in a reference to the order’s founding by former Confederates and its masked namesake. Then on Monday, Kemper, whose family runs Commerce Bancshares, apologized and condemned the organization’s “unquestionably racist, sexist, and elitist past.”

Now, critics are reviving decades-old calls to consign it to the dustbin of history.

Inside the order, the reaction has been mixed. Some members said the organization is not what it used to be and expressed frustration that efforts to diversify membership and increase community service in recent decades are going unnoticed. But even longtime members say some change may be necessary.

“We’ll be looking at every part of the organization to make sure it reflects as well on St. Louis as it can,” said a spokesman for the order, who spoke on condition of anonymity because the organization “does not divulge the names of our members.”

And a vocal minority is hoping for a full reckoning on the past — and an overhaul for the 21st century.

“The reality is that in order to survive another century, the organization needs to restructure and reform,” said one longtime member, who also spoke on condition of anonymity. “We’ve gotta back off on pageantry and be more inclusive, and that’s underway. Maybe this is the 2-by-4 across the head that makes it happen.”

The order is no stranger to crossroads or controversy.

Historians generally regard its birth in 1878 as the elites’ way of reasserting control of the city after a historic general strike.

The previous July, nearly 1,500 St. Louis workers, both Black and white, brought rail freight to a standstill for a week.

In response, business leaders gathered guns and volunteers for a militia, and days later more than 600 marched on the strike headquarters. A vanguard of police rushed the building, arresting 75 men. The rest fled.

Eight months later, brothers Charles and Alonzo Slayback, the latter a rebel colonel during the Civil War, hatched a plan for a secret society that would put on a festival each year in celebration of commerce and the people who controlled it.

They found their avatar in an 1817 poem by Thomas Moore describing a “Veiled Prophet of Khorassan,” loosely based on the leader of an eighth century revolt in Central Asia. They organized a parade based on New Orleans’ Mardi Gras and had floats shipped upriver. Then they scheduled it all in October in an effort to supercharge an annual harvest fair and named the strikebreaking police commissioner the inaugural prophet.

In the following decades, even as the Veiled Prophet became a St. Louis institution, it sometimes faced pea-shooters along the parade route, criticism from labor groups, and, one year, protests from Irishmen upset about unflattering depictions on parade floats.

In the 1960s and 1970s, ACTION, a civil rights group pushing for business leaders in the order to hire more Black people, protested. Those efforts culminated in 1972 when two protestors infiltrated the ball and one, Gena Scott, tore the veil off Monsanto executive Tom K. Smith.

ACTION later sued to boot the ball from the city-owned Kiel Auditorium, prompting a retreat to the privately-owned Chase Hotel.

By the end of the 1970s, the organization had weathered a decade of calls for dissolution from activists, public criticism from disillusioned debutantes and a wave of resignations in the membership.

One member, Charles Polk, an executive at a local flag maker, later told historian Thomas Spencer that at the time, “the VP wasn’t perceived as a civic organization, it wasn’t serving the interests of St. Louis ... A lot of money was being wasted on one party and a parade.”

In the four decades since, the organization has worked to change that perception.

In 1979, the order admitted its first Black members, and two years later, it started the VP Fair over Fourth of July, now known as Fair St. Louis. In 2003, it added a foundation that gives money to various causes and connects members with volunteer projects.

The organization has since worked on hundreds of charitable projects, according to its website. In recent years, its volunteers have built an outdoor classroom for a St. Louis public school, repaired a playground in Ferguson with the Royal Vagabonds, a group founded by Black men​ excluded from white social clubs in the 1930s, and helped give out supply-loaded backpacks to Normandy High School students.

In interviews, current members speak glowingly about the additions as proof the modern organization lives up to its original billing as a good thing for St. Louis.

“The organization today is a place where people come together for activities that benefit the community … and make St. Louis better,” said another member, who also spoke on condition of anonymity.

That same member said he’s personally volunteered on the fair’s air show for years and painted houses and planted community gardens with his daughters to get them involved in service and communities they might not visit otherwise, like north St. Louis.

“We are all better when we see the whole of the community and provide service where it’s needed and welcomed,” he said.

A longtime staff member said the 143-year-old parade has also been overhauled and now focuses on giving area marching bands and dance groups the opportunity to compete and perform for the crowds. The organization’s volunteers have also helped the city pull off Super Bowl, World Series and Stanley Cup parades.

“Those are things I think the community needs to be aware of,” the staffer said.

Some old standbys remain in place.

Joseph Sivewright, CEO of Nestlé Purina PetCare for the Americas

The organization is invite-only. Women are not allowed as members. Dues are about $1,000 a year.

Disclosures filed with the IRS in the past decade for the tax-exempt order and related organizations show the executive officers remain some of the region’s most powerful businessmen and dynastic patricians with surnames such as Schnuck (grocery stores), Desloge (lead mining), Maritz (employee incentives and corporate travel) and Kemper (banking).

Executive boards identified in tax records have remained largely white: As of 2018, the last year for which information is publicly available, fewer than a fifth of about 40 board members on three boards were people of color.

The ball itself remains a window into times past. Corporate executives in tuxedos and white gloves walk young women in shimmering gowns down a lighted, elevated runway. The Veiled Prophet himself, his head shrouded in lace and golden crown, rules the festivities beside the ball’s crowned debutante, the Queen of Love and Beauty. His rainbow-sashed guards, dressed as the British imperial officers in India known as Bengal Lancers, flank his sides.

Some of this, however, may well change.

The longtime staff member said in an interview with the Post-Dispatch that the prophet and his entourage will no longer be featured in the annual parade.

“That pageantry is not going to be a part of it anymore and the parade will be truly a community-based event,” he said. “We recognize that it was inappropriate.”

The prophet will remain in the ball for now, however, where it will almost certainly be photographed for society magazines as it has for years. And the staff member brushed off concerns about spending on the ball and questions about efforts to further diversify what remains a heavily Caucausian crowd.

He also flatly rejected the demands of activists that the organization dissolve.

“We will evolve and continue to improve as we work toward our goal of making St. Louis a better place for all,” he said.

Percy Green, the longtime activist and ACTION leader, says the right reform remains dissolution, just as he said 50 years ago.

If members of the Veiled Prophet really want to help St. Louis, he said, they should go back to their offices and hire Black men to good-paying jobs that can support a family.

Spencer, the historian who wrote an oft-cited book on the order, said the only other way to end the never-ending criticism would be to completely ditch the veils and do something big for the community beyond sporadic events.

He said there may be a model for the 21st century in Omaha, where the Knights of Ak-Sar-Ben use their ball to raise money for scholarships and recently announced plans to give away $800,000 in community college stipends each year. The organization also recently ended the practice of naming a king and queen of each ball, citing the increasing awkwardness of pairing an older male community leader with a college-age woman in the modern era.

Some are hopeful the Order of the Veiled Prophet will take a similar path: invite women to be members, offer greater help to the underprivileged and maybe even reshape the ball into something that better reflects the majority of the city.

“This organization needs to become something that will appeal to Black and brown people and women and entrepreneurs,” said the critical member, “if it’s going to be relevant.”

Messenger: A beer heiress, the Veiled Prophet, and the potential for real change in St. Louis

Will apology make a difference, or can Senate candidate do more to bring real change to St. Louis? 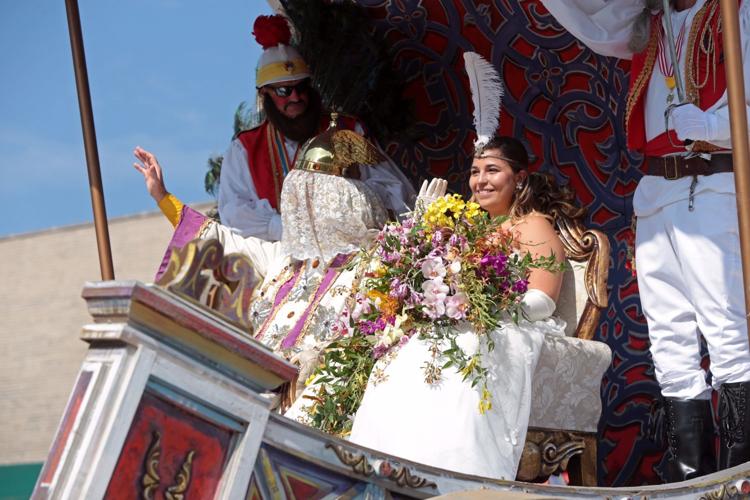 The Veiled Prophet, seated left, and Cecilia Fox, the Queen of Love and Beauty, wave at the crowd during the 137th Annual VP Parade on Thursday, July 4, 2019. Photo by Cristina M. Fletes, cfletes@post-dispatch.com. 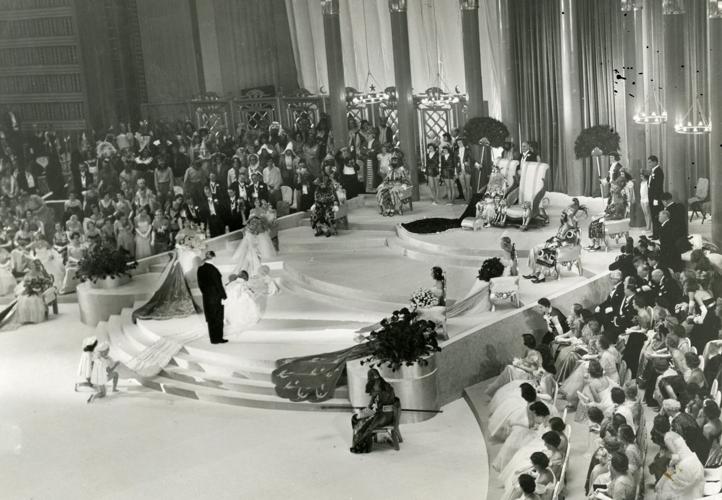 Carol Gardner, escorted by John M. Olin, bows before the Veiled Prophet at the 1949 ball at Kiel Auditorium. Gardner's patneral grandfather was a MIssouri governor; her maternal grandfather was an early St. Louis auto manufacturer, then the Federal Housing Administrator. Post-Dispatch archive photo 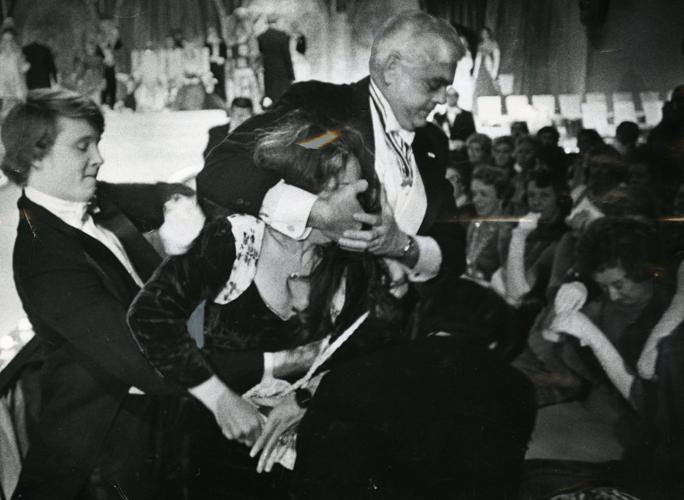 Annette Foster, an ACTION protester, is seized after spraying an irritant on people at the 1976 Veiled Prophet. Foster and another woman, Jessie Baker, were arrested. In 1978, Foster was convicted of assault. Post-Dispatch archive photo 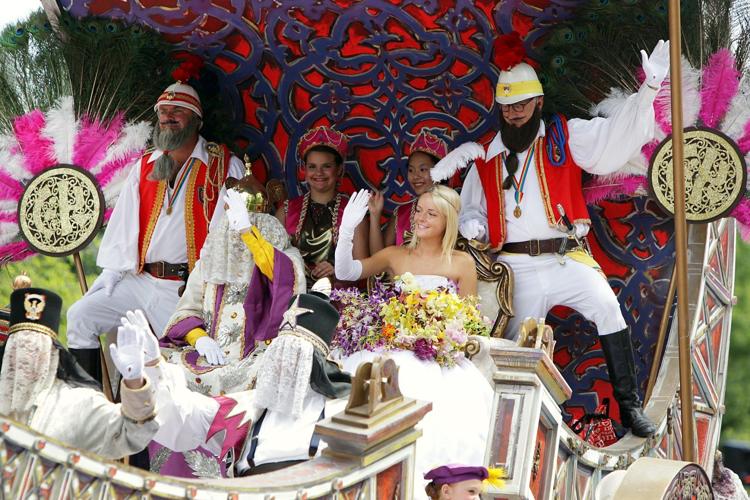 Katherine Falk Desloge, of Ladue, the crowned Queen of Love and Beauty, waves to the crowd in the Veiled Prophet Parade during Fair St. Louis on Friday, July 4, 2014, in St. Louis. Photo by Huy Mach, hmach@post-dispatch.com 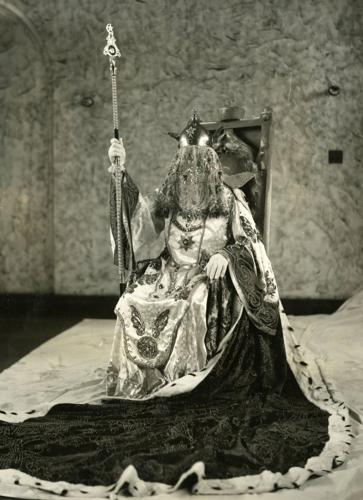 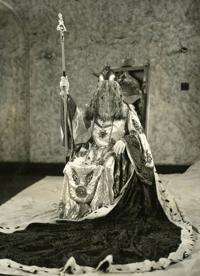 A 1938 portrait of the Veiled Prophet in full regalia. The ball and parade that year were in October. 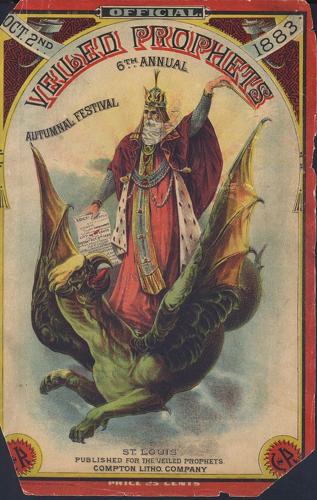 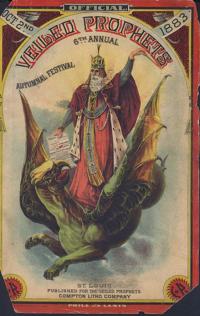 This program from 1883 depicts the Veiled Prophet as a Father Time-like figure. The characterization stands in contrast to the armed, Klan-like figure rendered in the Missouri Republican in 1878.