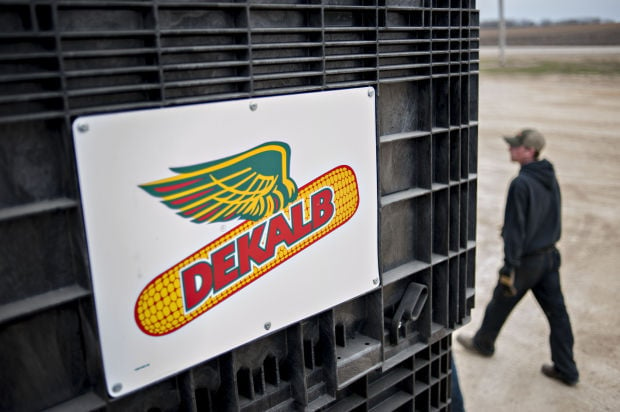 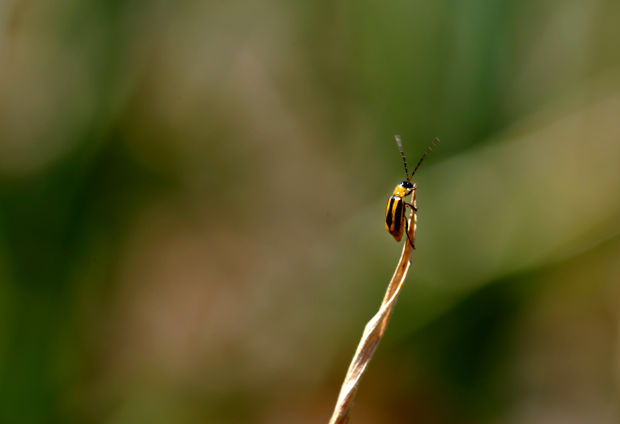 Pesticide use surges among U.S. farmers worried that some insects have become resistant to genetically modified versions of corn, which was supposed to kill pests. Whether the return to pesticide use makes sense or is simply spurred by a chemical industry marketing campaign is the topic of a big debate in the corn belt. Shown, a western corn rootworm on a corn stalk in Dunlap, Ill., in 2005. Bloomberg News photo by Greg D. Hess 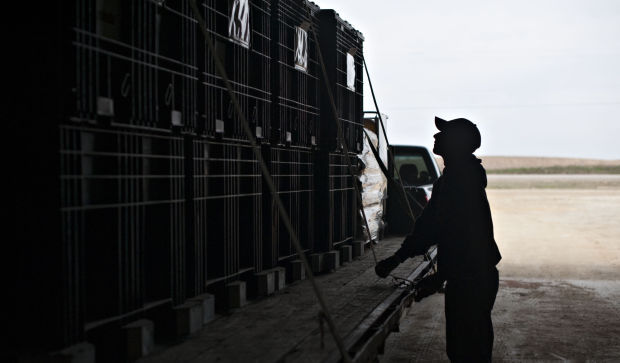 HOUSTON • Pesticide use is surging among U.S. corn farmers who are worried that some insects have become resistant to genetically modified versions of the crop.

That’s an unexpected reversal because one of the promises of engineered corn when it was introduced 17 years ago was its ability to kill pests. The use of soil insecticides for the crop plunged 90 percent through 2010, according to the Department of Agriculture.

Whether the return to pesticide use makes sense, or is simply spurred by a chemical industry marketing campaign, is at the center of one of the biggest debates in the corn belt this spring. At the heart of the controversy is whether snuffing out pests in the short term with chemicals may create a worse problem down the road.

Farmers say they need to do whatever it takes now to control the western corn rootworm, the most damaging U.S. corn pest. Although Monsanto designed its corn to kill the worms, resistant bugs have been found in four states and growers say pesticides are needed again to protect their crops.

It would be “financial suicide” to plant rootworm-killing corn without a soil insecticide as a secondary way to control the larvae, said Illinois farmer Mike Jenks, echoing the views of growers across the Midwest.

That view is driving up profit for pesticide makers like FMC Corp. and American Vanguard Corp. They’re marketing corn insecticides as a kind of insurance policy that costs $12 to $25 an acre. Root-eating larvae of the flying insect has historically cost U.S. farmers $1 billion in expenses and lost harvest, according to USDA estimates.

Some scientists are skeptical that a return to pesticide use is in the long-term interests of farmers. Soil insecticides don’t improve root health or yields when the corn is already producing its own insecticide, according to a paper by University of Illinois scientists published online April 25 by the Journal of Applied Entomology. Iowa State University researchers reached a similar conclusion last year.

“It’s pretty clear where the science and the scientific community is on this point,” Gray said. “It really does not add much.”

Entomologists also warn that the additional insecticide may exacerbate the resistance problem that farmers fear. That’s because pairing pesticides with engineered corn exposes insects to extra toxins, delaying maturity. That leads to increased mating between resistant worms, hastening the evolution of rootworms that aren’t vulnerable to GMO corn.

An EPA panel of scientific advisers warned in March that “the use of a soil insecticide with a Bt hybrid should not be done.” The report refers to GMO corn as Bt because it includes a gene from Bacillus thuringiensis, a soil bacterium widely used to control insects.

That echoes a 2012 warning to the EPA from 22 corn entomologists that “an insurance-based approach” to insecticides “will only increase insect resistance.”

That concern over resistant rootworms is driving up sales for insecticide makers including American Vanguard, FMC and Syngenta, which dispute the scientists’ findings.

There haven’t been any studies confirming that soil insecticides are speeding the evolution of resistant rootworms, said Peter Porpiglia, head of product developing at Newport Beach, Calif.-based American Vanguard. “It’s pretty much conjecture.”

American Vanguard may have the most at stake. Net income jumped 56 percent from 2011 through 2013 and soil insecticides for corn have been “a very material driver,” said William Kuser, a spokesman. More than a quarter of its sales come from soil insecticides such as Smart Choice 5G and Aztec, used on about 5 million acres (2 million hectares) of corn.

“We will continue to push our message,” Wintemute said on the call. “It’s a good return on investment to make a soil insecticide application.”

FMC runs ads in farming magazines showing insects gorging on corn roots, warning that Bt “protection isn’t enough.” The Philadelphia-based company promises to boost yields by as much as 11 bushels an acre with its Capture LFR insecticide.

The campaign seems to be working. Profit in its agriculture unit jumped 55 percent from 2011 through 2013, driven by rising North American pesticide sales.

FMC CEO Pierre Brondeau expects sales to increase this year, in part due to “concern over corn rootworm.”

The company dismisses concerns that promoting Capture for use with Bt corn may accelerate resistance.

Insecticides are effective in controlling grubs, wire worms and other lesser pests, and are appropriate when resistant rootworms are known to be in a field.

Monsanto says resistant rootworms are rare. Only 0.2 percent of the 37 million acres with Monsanto’s rootworm-protected corn have had “unexpected damage” from the insects, said Jeffrey Neu, a spokesman for the Creve Coeur-based company.

Gray, the entomologist, said resistance is probably more common. Resistant worms have been found in six Illinois counties and they may be about as common in other states, he said.

Rotating crops, planting a refuge and using a variety of Bt corn types are the best ways to control rootworms, not insecticides, said Gray.

“When these Bt hybrids came into the marketplace, one of the biggest selling features was that producers were going to eliminate the use of soil insecticides,” Gray said. “Right now we are basically throwing everything at this insect. It’s not a sustainable approach.”

An increasing number of weeds are Roundup-resistant, forcing changes in agricultural practices.

Genetically modified wheat was discovered on a research plot in Montana, despite the fact that testing there ended more than 10 years ago. It's significant because many foreign buyers of U.S. wheat refuse such modified grains. The incident does not appear to be causing any turmoil, however, as U.S. investigators say the commercial supply was not affected.

Pesticide use surges among U.S. farmers worried that some insects have become resistant to genetically modified versions of corn, which was supposed to kill pests. Whether the return to pesticide use makes sense or is simply spurred by a chemical industry marketing campaign is the topic of a big debate in the corn belt. Shown, a western corn rootworm on a corn stalk in Dunlap, Ill., in 2005. Bloomberg News photo by Greg D. Hess