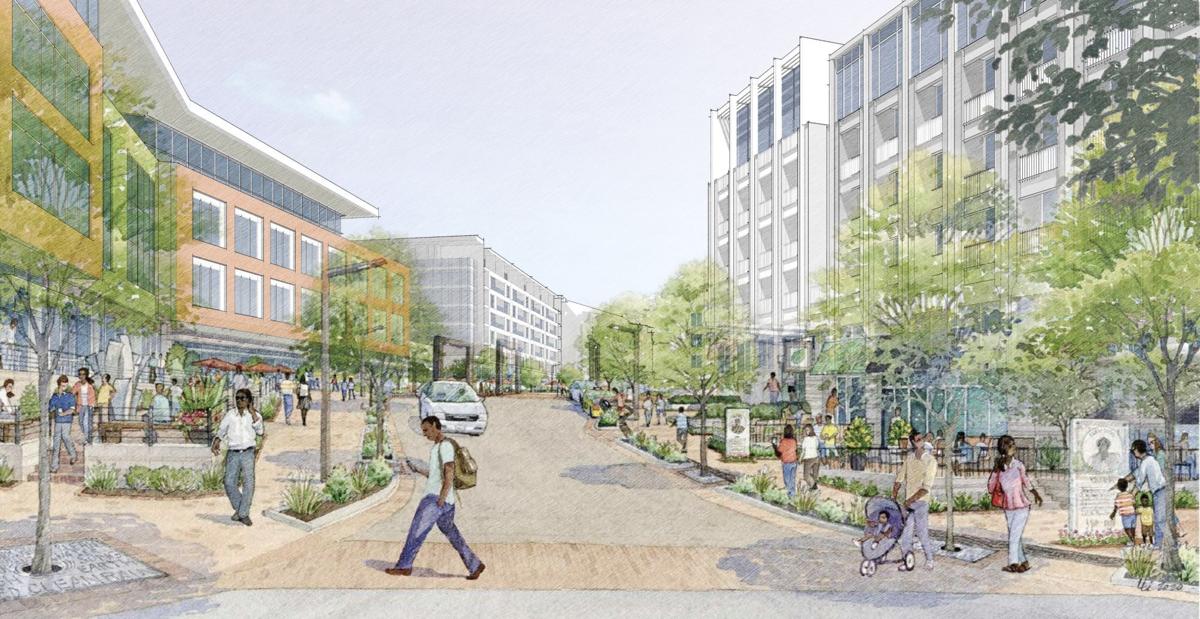 SG Collaborative, led by developers Green Street Real Estate Ventures and Seneca Commercial Real Estate, is proposing a $320 million redevelopment of 15 acres in Webster Groves. This is a conceptual rendering of a view looking west from Gore. (Handout) 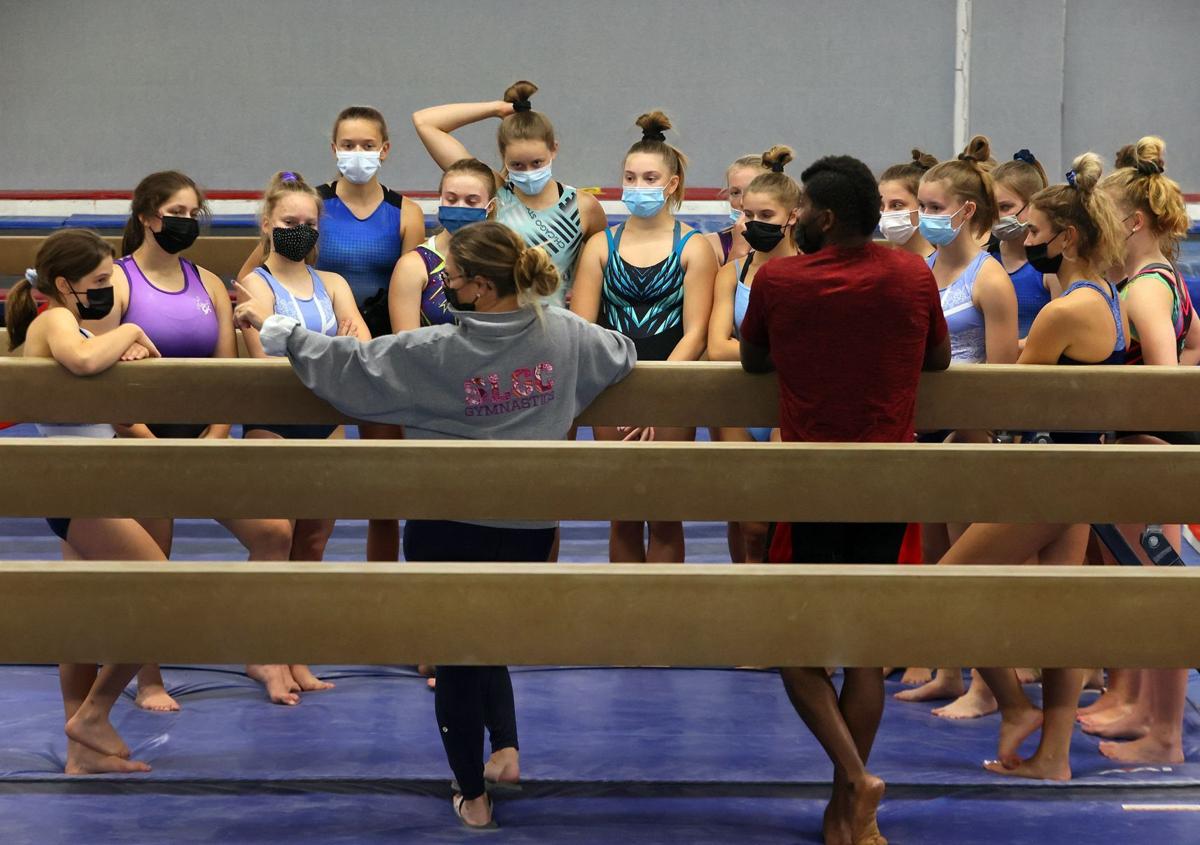 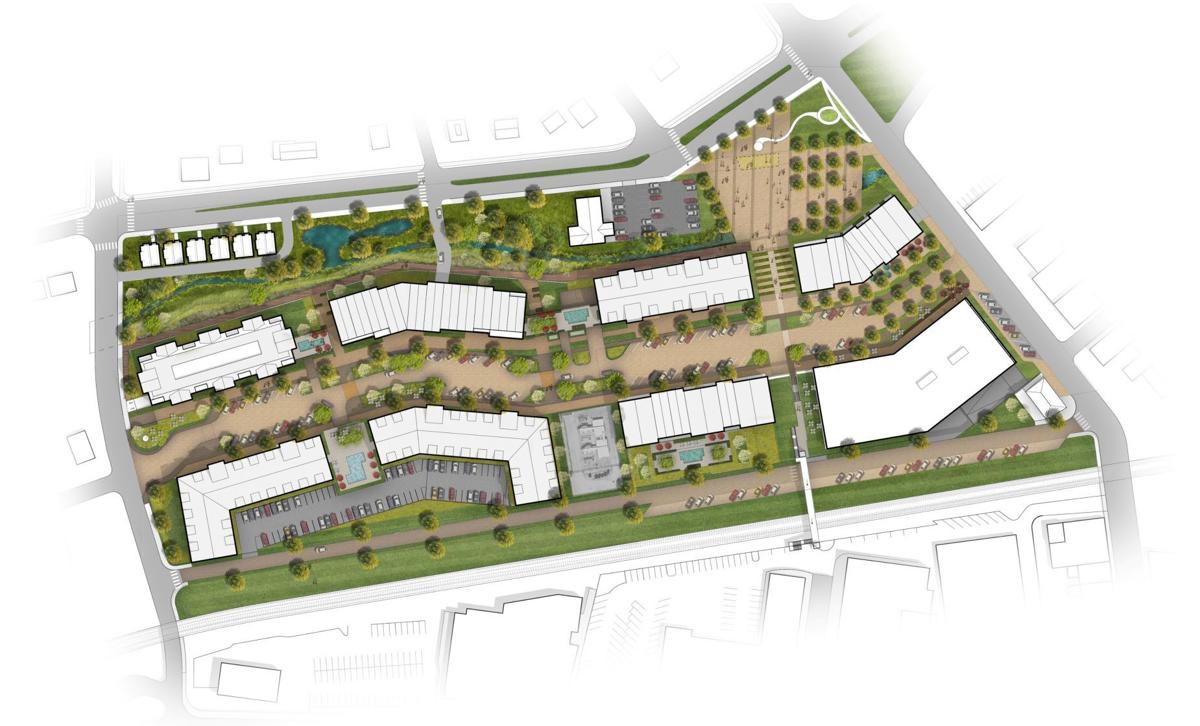 WEBSTER GROVES — A study that did not include the impact of train traffic on a proposed $320 million redevelopment here generated the most questions from the City Council during a Tuesday meeting about the project.

The project, called Douglass Hill, would demolish existing businesses and warehouses to make way for about 700 apartments, 100 condominiums and more than 100,000 square feet of retail and commercial space at the southwest corner of North Gore and West Kirkham avenues, an area the city is calling Old Webster North. A historic Black church on West Kirkham would remain.

Douglass Hill represents a new opportunity to attract more residents — and more tax dollars — for an older suburb like Webster Groves, which has long identified the area for redevelopment. It is the most ambitious commercial development to go before the council in recent memory, but its scale and potential to exacerbate traffic near the railroad tracks have been divisive.

A railroad would border the project, but a study, paid for by the development team of SG Collaborative, that estimated how the project would impact traffic did not include the railroad.

“There will be significant traffic impacted,” Mayor Gerry Welch said. “I think, as a city, we should (have) a better traffic study.”

Mara Perry, Webster’s director of planning and development, said the railroad does not have a regular pattern of timing nor number of train cars, making it difficult for the study to create a traffic model based on train traffic.

The council also asked about the amount of green space, infrastructure and flooding during the meeting.

The proposal has drawn plenty of scrutiny and public interest: More than 20 people attended Tuesday’s meeting in person, with at least 70 others tuning in via Zoom. The public will have a chance to weigh in on Douglass Hill at the council’s Oct. 19 meeting.

The discussion, which began about 7:30 p.m. Tuesday, lasted several hours, and was still going on close to 10 p.m. The council, however, was not expected to vote until next month, the mayor said.

The developers are seeking $35 million in incentives to help cover the costs of land acquisition and work to get the site ready for new construction. They have asked the city for the option to use eminent domain to force property owners to sell, but said they’re not sure they’ll have to.

SG Collaborative, which includes Green Street Real Estate Ventures and Seneca Commercial Real Estate, has said the project will add revenue to the school district and other taxing jurisdictions, as well as improve walkability.

“We believe it will be a positive addition to the community, and we look forward to the process going forward,” Green Street’s Phil Hulse said in a statement.

But opposition is growing.

A group called Webster Groves Residents Organization is collecting signatures for an initiative petition that would require a public vote on several issues impacting Douglass Hill — including the use of eminent domain and construction in 50-foot buffers surrounding a creek that lies within the project’s footprint. The goal, said organizer Richard Mazzarella, is to stop SG Collaborative.

“I don’t see how this fits in Webster,” Mazzarella said of Douglass Hill. “We believe we should have a say.”

The group has collected over 600 signatures, more than the required 428 needed, and hopes to file the initiative petition with the city clerk on Friday, he said.

Webster Groves Residents Organization was instrumental in overturning an affordable housing ordinance in August. Mazzarella himself donated $11,000 to the group’s campaign.

Webster Groves residents weigh in on $320 million proposal; some fear town would never ‘be the same’

Redevelopment plan would add hundreds of apartments and condos, plus restaurant, office and retail space near central business district.

SG Collaborative, led by developers Green Street Real Estate Ventures and Seneca Commercial Real Estate, is proposing a $320 million redevelopment of 15 acres in Webster Groves. This is a conceptual rendering of a view looking west from Gore. (Handout)