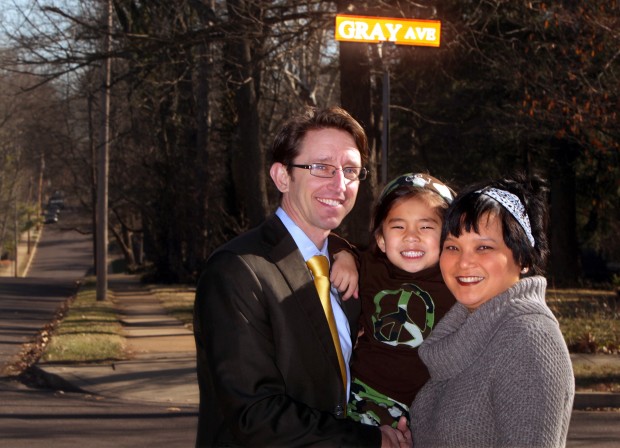 David, Cameron, 4, and Thuy Smith pose at the corner of Gray and West Swon avenues in Webster Groves on Thursday, Jan. 5, 2012, near the site where they will build an "active house," a first-in-the-nation design based on a Danish system of highly energy efficient-homes. Christian Gooden, cgooden@post-dispatch.com 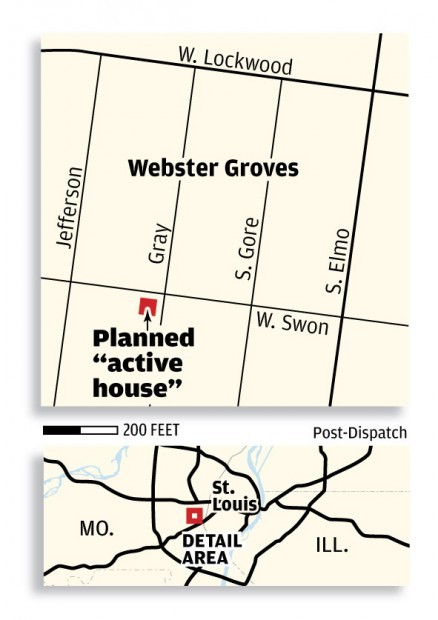 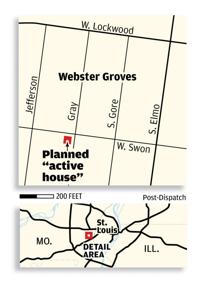 When David and Thuy Smith chose to live green, they didn't want to stick out like a green thumb among the nearly century-old homes in their Webster Groves neighborhood.

"We don't want to have a funky house — just a glass globe or anything," David Smith, 37, said. "We want a nice, Midwestern house."

It appears the couple will get their wish.

Their new home will incorporate the principles of "active house" construction — a technique that combines energy efficiency, healthy indoor air and a design to take best advantage of sun, shade and breezes.

The Active House Alliance, formed in 2010 in Copenhagen, Denmark, has so far promoted construction of about a dozen such houses in Europe. The Smiths' house on Gray Avenue will be the first "active house" in the United States, those involved in the project say.

Velux Group, a Danish manufacturer of skylights and solar panels, helped found the alliance and is providing at a discount its products for the house in Webster Groves. Matt Belcher, a St. Louis specialist in "green" construction, is managing the Smiths' project.

He said "active house" proponents, including a Velux engineer, contacted him last spring about building a prototype in the United States. He suggested St. Louis as the location. A construction budget for the Smiths' house has yet to be determined, but Belcher said it would meet a mortgage lender's appraisal.

Unlike the spare modernistic styles of most European "active houses," the two-story house will be visually indistinguishable from its neighbors, said its architect, Jeff Day.

"We're trying to take away the stigma of green architecture having to be ultramodern," Day said.

A goal is to build a house of traditional design while incorporating efficiencies that will make utility costs negligible. Geothermal wells drilled in the front yard will provide most of the energy for the home's heating and cooling systems. Solar panels will provide hot water. Windows will be placed to admit the sun's warmth in winter, and rooflines will be designed to provide shade in summer.

Efficiency and comfort "really boils down to all the guts inside the house," Day said.

The University of Missouri's Center for Sustainable Energy will monitor and document the house and its energy statistics during the first year.

The Smiths' four-bedroom home will replace a recently vacated stucco house built in 1921. Kim Hibbs, whose Hibbs Homes, of Chesterfield, will build the new house, said site work could begin next month. "Deconstruction" of the existing house will include recycling of some interior framing, he said. Its concrete foundation will be pounded into gravel and used as fill in the new construction.

Hibbs said "active house" was a Danish version of LEED (Leadership in Energy and Environmental Design) construction in the United States, without the detailed documentation of efficiencies required for such certification. "Active house" principles include LEED-type environmental friendliness while emphasizing a blend of efficiency, indoor air quality and the building's overall effect on its surroundings.

The exterior of the Smiths' home will probably blend fiber cement and brick or stone, Hibbs said.

"We know this is going to be a very efficient home that's going to perform very well," he added.

David Smith said the decision to build an "active house" was a result of chance. He approached Day last fall about a new house because the architect had previously designed an addition to the Smiths' current house in Brentwood. Day responded by pitching the idea of an "active house" on the site in Webster Groves.

Smith, an accountant and owner of Smith Patrick, a CPA firm, crunched the numbers on the project and discovered that an "active house" could be affordable.

Smith said he and his wife, Thuy, were greatly concerned with having a home that fits in the neighborhood where he grew up. He hopes the new house will be completed this fall.

Both in their eighties, Ann Dillon and Bessie Hicks show no signs of slowing down.

Program managed by the St. Patrick Center has helped dozens get work, generally in landscaping or recycling.

The law to phase out incandescent light bulbs was promoted as a simple, almost painless, change when Congress first passed it.

Company credits decision to build only according to green standards for burst in new house sales.

It's not always the windows' fault, he says.

David, Cameron, 4, and Thuy Smith pose at the corner of Gray and West Swon avenues in Webster Groves on Thursday, Jan. 5, 2012, near the site where they will build an "active house," a first-in-the-nation design based on a Danish system of highly energy efficient-homes. Christian Gooden, cgooden@post-dispatch.com