Wells Fargo Advisors, the St. Louis-based brokerage arm of Wells Fargo, has agreed to pay $35.5 million to settle a class action racial discrimination lawsuit brought by a group of African-American financial advisers. The company also agreed to implement several initiatives to boost recruiting and advancement opportunities for African-Americans after the settlement finalizes later this month.

Lance Slaughter, the lead plaintiff, filed the lawsuit in September 2013 in federal court in the northern district of Illinois. Slaughter, a financial adviser employed by Wells Fargo Advisors in the Washington, D.C., area since 2005, alleged that of the company’s more than 15,000 registered brokers, African-Americans are under-represented in adviser and managerial roles and are paid substantially less than employees who are not African-Americans.

There are at least 325 people who self-identify as African-Americans who are potential members of the class and there may be more class members, said Slaughter’s attorney, Linda Friedman of the Chicago-based law firm Stowell & Friedman, who said she’s hopeful the settlement will prompt other investment firms to end discriminatory practices.

“The hope is that this case and others, that the message will resound that there is liability for these actions,” Friedman said. Several other investment firms have also faced racial bias lawsuits lodged by employees in recent years, including Morgan Stanley and Merrill Lynch.

Wells Fargo Advisors denied the allegations but said it agreed to settle the case to avoid protracted litigation.

“We do not agree with the claims in the lawsuit, but believe that putting this matter behind us is in the best interests of our team members, clients and investors,” Wells Fargo Advisors spokeswoman Helen Bow said in a statement. “Resolving this matter allows Wells Fargo Advisors to continue to focus on providing a diverse and inclusive work environment where all of our team members can thrive through industry leading recruiting, coaching, leadership and business development practices. We will also update our policies and procedures to provide greater opportunities for inclusiveness.”

Additionally, as part of the settlement reached Dec. 30, Wells Fargo Advisors agreed to end the practice of requiring new financial advisers or trainees to reimburse costs of their training, which can total $50,000 per year. The company also agreed to boost hiring and promotion opportunities for minorities, and hire a recruiting professional whose primary responsibility is to recruit African-American financial advisers and trainees.

The settlement comes as the brokerage arm’s parent company, San Francisco-based Wells Fargo, is seeking to burnish its image after its employees created thousands of fake accounts to meets sales quotas. The bank said it fired about 5,300 employees related to the account scandal and was fined $185 million last year. 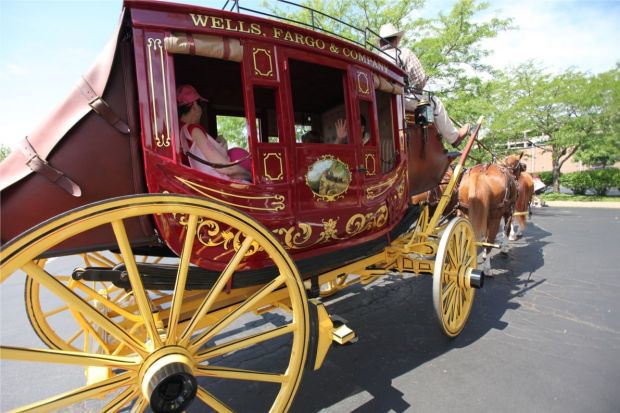 The Wells Fargo stagecoach is a symbol of the company. Photo courtesy of Wells Fargo Advisors