‘What are we supposed to do?’ Service workers hardest hit by coronavirus closures
0 comments
Share this
Subscribe today: $3/3 months

HANLEY HILLS — On Wednesday, Monica Hendrix found out she didn’t have a job.

The 24-year-old waitress at Red Robin in Chesterfield was making just enough to cover her bills. Her hours had already been cut this month as concern mounted over the coronavirus and business began dropping off at the restaurant. When state and local leaders began announcing ever stricter measures forcing restaurants to curtail dining, Hendrix, like so many others in the service industry, found herself suddenly faced with the terrifying prospect of unemployment.

It all happened so fast.

Hendrix’s sister, Paula, and Paula’s two children — 2-year-old Lian and 9-month-old Lincoln — live with her in the small north St. Louis County house she rents with two other roommates. Hendrix has a car bill due April 15. Her sister’s job at a Qdoba Mexican Eats is in jeopardy as the restaurant moves to curbside pickup only.

“They only had about 12 customers yesterday — it isn’t enough to keep everyone on or keep your business open,” Paula Hendrix, 22, said as she played with her kids before her Thursday shift, maybe one of her last. “I don’t think they’ll stay open more than a week.”

The sisters, originally from Steelville in rural Missouri, hope that together, along with their roommates, they can scrape up enough for rent. Their parents aren’t really in the picture. They don’t have a family to fall back on.

“I’m kind of their fallback,” Monica Hendrix said of her sister and the two children.

For thousands of workers in St. Louis — and millions around the country — there is no “working from home.”

Hotels are slashing housekeeping, along with everyone else, as rooms sit empty. Convention center workers have no events to work. Bartenders and servers are being laid off by the thousands. Vendors who work St. Louis Blues games and XFL games aren’t getting paid.

The now-canceled BattleHawks games — one would have been Saturday, and two more were scheduled at the Dome at America’s Center for the season — were especially good money for server and bartender Mary Williams of Wellston.

“We just got the BattleHawks season back here and everything. And it just went dead,” she said. “If it does go into next month, what are we gonna do?”

St. Louis mirrors the broader U.S. economy, with about 10% of the workforce in leisure and hospitality. Across the U.S., over half of the workforce is hourly rather than salaried, according to the Bureau of Labor Statistics.

“If this goes on for a long time, everyone’s going to suffer because of all the kinds of reverberations that will start hitting industry after industry,” said Jake Rosenfeld, a Washington University sociology professor who studies inequality. “But for the short term, the full brunt of it’s going to be borne on hourly workers who have to show up for work each day. And it won’t take long for us to start to see that in the data.”

“The fraction of American households who have $1,000 cushion for an emergency on hand is something like less than half,” Rosenfeld said. “There is just not a lot of cushion there in the broader U.S. economy to weather this type of shock to the system, and that’s especially true for hourly workers.”

With the closure of schools and day cares, workers now have the added anxiety of juggling child care amid going to work, if they’re lucky, said Anne Winkler, a University of Missouri-St. Louis economics professor.

“The reality is, a good fraction of Americans live on the financial brink,” she said.

In a move that would have seemed unthinkable a month ago, Congress is considering a $1 trillion-plus stimulus bill that would send billions of dollars in direct checks of over $1,000 to many Americans. Even that, some worry, may not be enough to blunt the economic hit.

Deshawn Johnson, 19, lost his shifts at the Red Lion Hotel downtown. He lives with his parents in St. Louis and has some savings to fall back on.

“But it won’t last me two weeks,” he said. “I didn’t expect it to start closing down so soon.”

Tony LaRue, a building engineer at the Red Lion, said two other engineers had been laid off. He had been working about 50 hours a week, earning overtime. By Tuesday, he was down to 20 hours. He figures 30 to 45 people were laid off Monday.

“The only reason the building’s still open is we have condos at the top,” LaRue said.

He’s a single dad with four kids. He has a little money saved up — money he was planning to use to buy a building to house his nonprofit, Operation Opp-side 21, that works to combat gun violence among youths.

‘Nothing we can do’

Hotel owners have had little choice.

“We had a great outlook,” said Mike Mullenix, chairman and chief executive officer of Brentwood-based Equis Hotels, which last month opened a new Fairfield Inn and Suites by Marriott on Market Street downtown. “And then, in the last 10 days, I’ve never seen anything like it. We went from 100 mph to 0.”

Mullenix, a 33-year veteran of the industry, has opened 19 hotels over his career. He worked through the fear of 9/11 and the cratering demand after the 2008 financial crisis. This, he said, is like both at once.

Occupancy is between 10% and 45% at the seven hotels — six in the St. Louis area — that Equis, a franchisee, manages, off from the 65%-85% that’s normal for this time of year. Each was staffed by 40 or 50 people. In the last few days, Mullenix has had to lay off more than half of his employees.

“You have to look at people that have worked for you for a very long time and tell them there’s nothing we can do,” Mullenix said.

Kevin McNatt, president of Unite Here Local 74, guesses about three-quarters of the 400 or so workers his union represents were laid off from the Marriott St. Louis Grand last week. The Casino Queen, another business he represents, was forced to close along with other Illinois casinos and isn’t paying laid-off workers, McNatt said. The union is trying to get what it can for hundreds of members who worked events at Enterprise Center, Busch Stadium and America’s Center. Maybe, he hopes, this will pass in time for baseball season. But it’s too late for the NCAA Tournament games — originally scheduled for this weekend — at Enterprise Center.

Ella Fritts figures she’s one of the “lucky ones” in the service industry. She works in the kitchen at The Improv Shop, on the edge of The Grove, which is moving to curbside pickup. And though she has lost shifts, she has been promised at least a full month’s pay for March. When she found out, her boss immediately texted her to say that, if she needed help with groceries, “I got you.”

She’s already paid next month’s rent, and her boyfriend is a delivery driver, hopefully relatively stable employment as people hole up inside.

“If something happens with his job, then I’ll freak out,” Fritts said.

More pain is certainly on the way, though. Washington University economist Steven Fazzari was stunned when he ran the numbers.

Assuming portions of the economy such as retail and restaurants are essentially shutting down, the wallop to gross domestic product could be as high as 8%, even without considering any multiplier effects. Cut that in half to be conservative and it’s still 4% — the total loss of output the economy suffered during the Great Recession between late 2007 and mid-2009.

But that happened over 18 months.

Fazzari, a scholar of that recession, hopes he’s wrong.

“The speed with which this is playing out, there’s nothing like it,” he said. “The Great Recession, there was pretty nasty stuff happening. People stopped spending as much. They stopped buying cars as much. They didn’t go to restaurants as much. But it didn’t go to zero. It didn’t even go to half. … You kind of feel a little bit like you’re looking into the abyss here.”

In the Hendrix household, there was a speck of good news this week, all things considered. Monica Hendrix, after sensing what was coming a week ago, began calling temp agencies. She learned Thursday she had been hired at a freezer warehouse in Troy, Illinois.

Wear warm clothes, they told her. Her first shift starts Monday, at 5:15 a.m.

“But it’s better than nothing.”

Switchgrass Spirits and 4 Hands Brewing among the companies trying to keep critical businesses and government stocked with sanitizer.

Mercy, SSM Health, BJC Healthcare and MU Health Care have all barred visitors, but all have exceptions for patients in obstetrics or pediatrics, and for extreme circumstances. Many are following age restrictions for visitors.

St. Louis and St. Louis County economic development groups seeded it with $750,000 and hope to raise more from private businesses and foundations.

Drury Hotels, based in Des Peres, instituted layoffs and furloughs this week. According to documents obtained by the Post-Dispatch on Tuesday, almost 200 were either furloughed or laid off out of about 900 corporate employees.

‘If people do get their unemployment checks and stimulus checks and the shutdown doesn’t last more than three or four weeks in St. Louis, there’s no reason people can’t pay the damn rent,’ lawyer says.

Some centers have extended their hours for the benefit of first-responders and others working to contain the coronavirus. 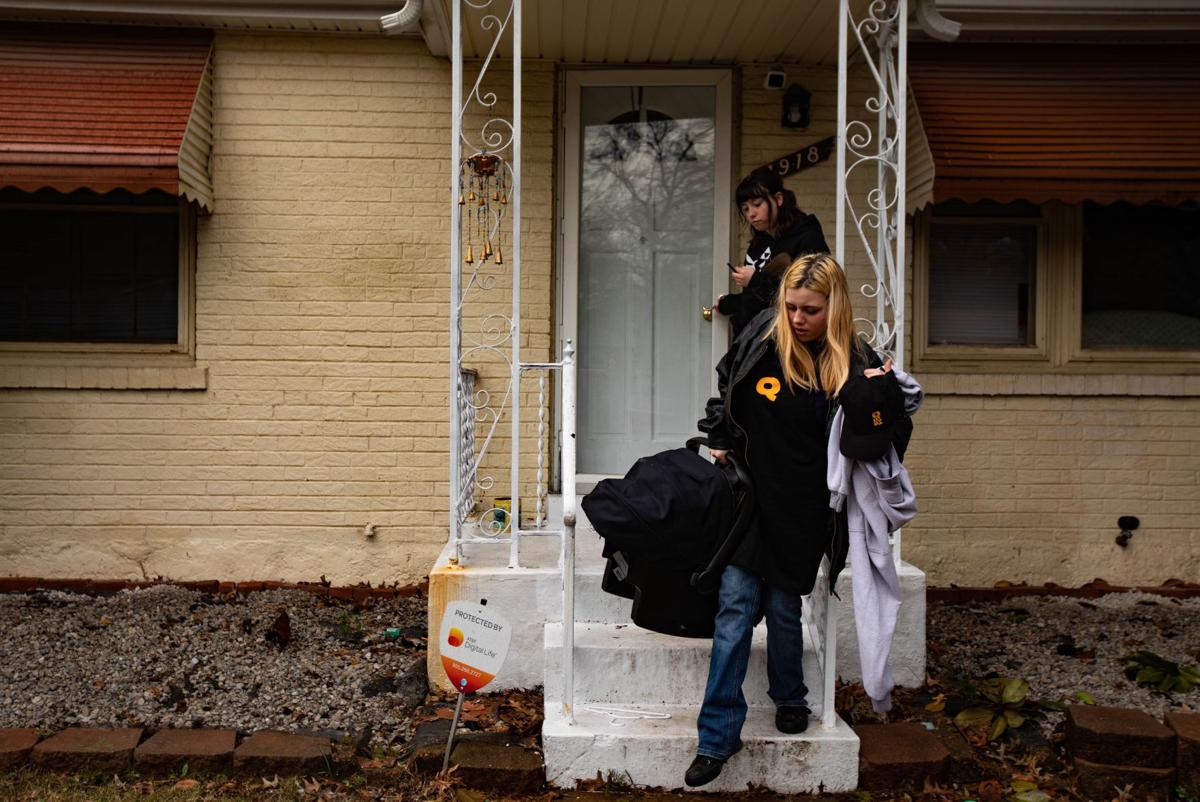 Paula Hendrix, 22, walks down the stairs holding her 9-month-old son Lincoln, as her sister, Monica Hendrix, 24, closes the door so they can leave their home in North County and take Paula to work on Thursday, March 19, 2020. Paula works at Qdoba, but her hours were cut by 10, and Monica lost her job waitressing at Red Robin due to the continued spread of the coronavirus. Photo by Rachel Ellis. rellis@post-dispatch.com. 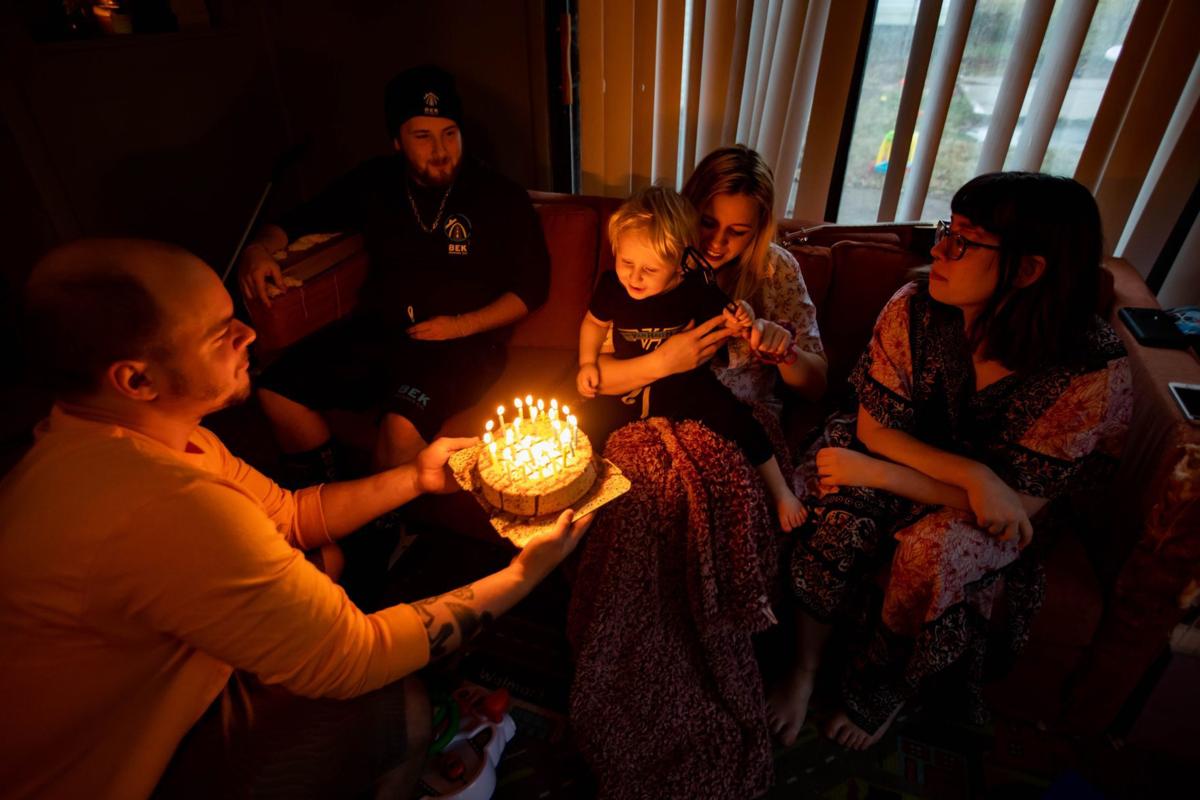 Roman Cahnovsky, 24, left, holds out an ice cream cake with 22 birthday candles for his roommate Paula Hendrix to blow out while her son Lian, 2, sits on her lap to help. Sitting next to Paula is her sister, Monica Hendrix, 24, right, and their other roommate, David Hutchinson, 24, in their home in North County on Wednesday, March 18, 2020. The four live together and, despite social distancing guidelines, were able to be together to celebrate Paula's birthday. Photo by Rachel Ellis. rellis@post-dispatch.com. 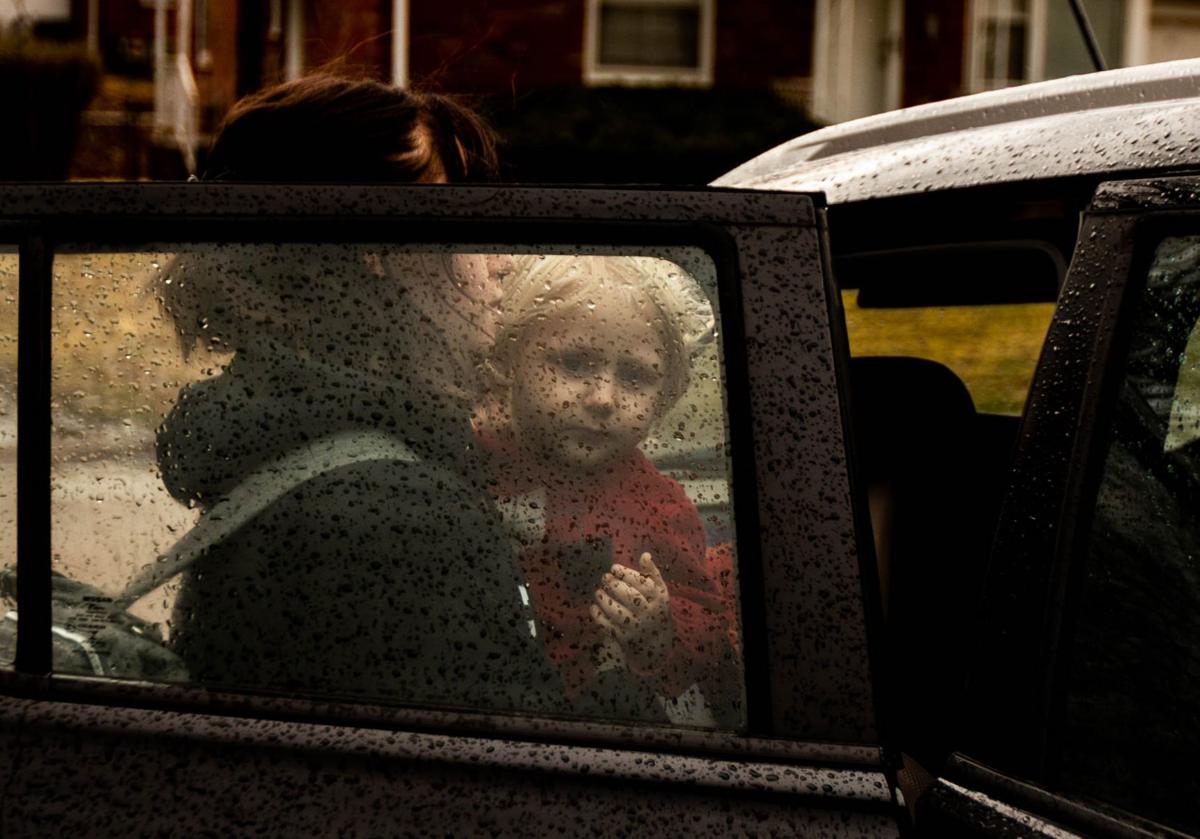 Monica Hendrix, 24, puts her nephew Lian Hendrix, 2, into the car as she gets ready to take her younger sister, Paula Hendrix, 22, to work on Thursday, March 19, 2020. Both Monica and Paula work in the food service industry. Monica is working with a temp agency to begin a new job next week after losing her waitressing job at Red Robin, while Paula is hanging on to her job at Qdoba while it is still open for carry-out orders. Photo by Rachel Ellis. rellis@post-dispatch.com. 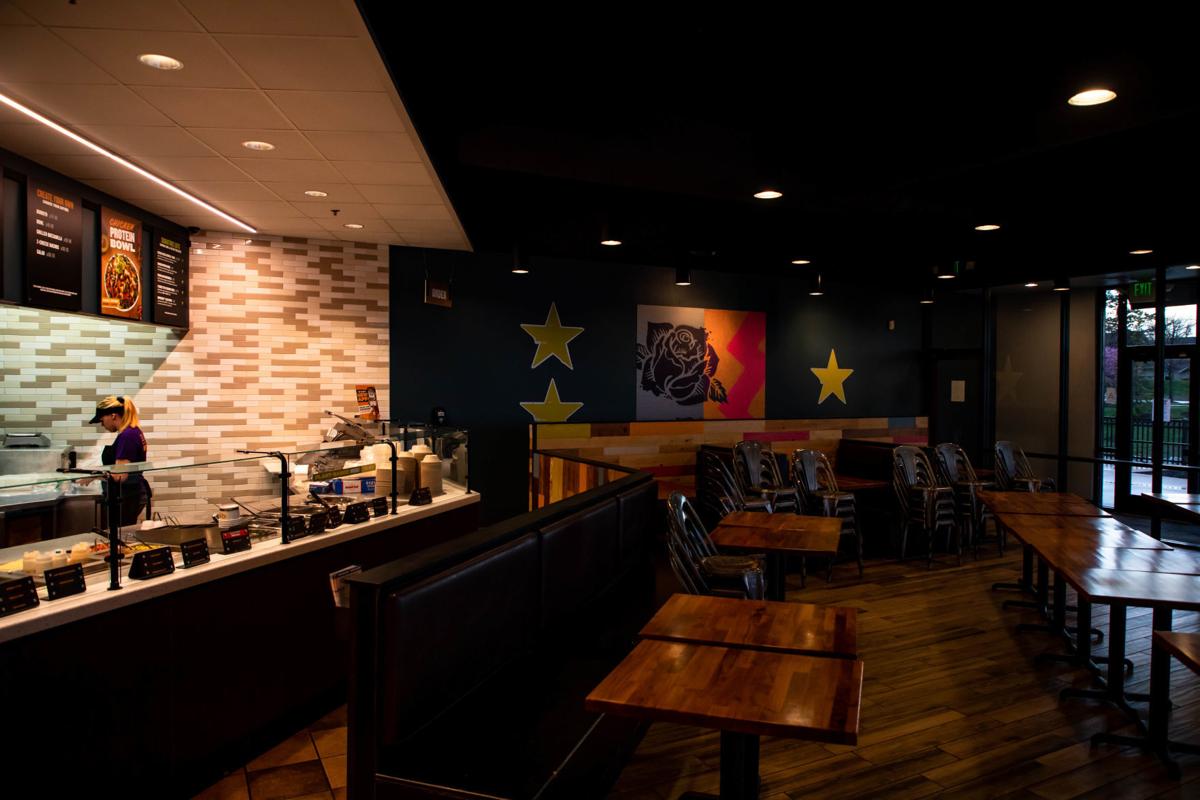 Paula Hendrix, 22, stands behind the counter with her back to an empty store as she works to clean and prepare food at the Qdoba in Town and Country Crossing on Thursday, March 19, 2020. Paula's hours were cut by 10 since the outbreak of the coronavirus, putting her job at risk. Qdoba is doing carry-out only. Photo by Rachel Ellis. rellis@post-dispatch.com. 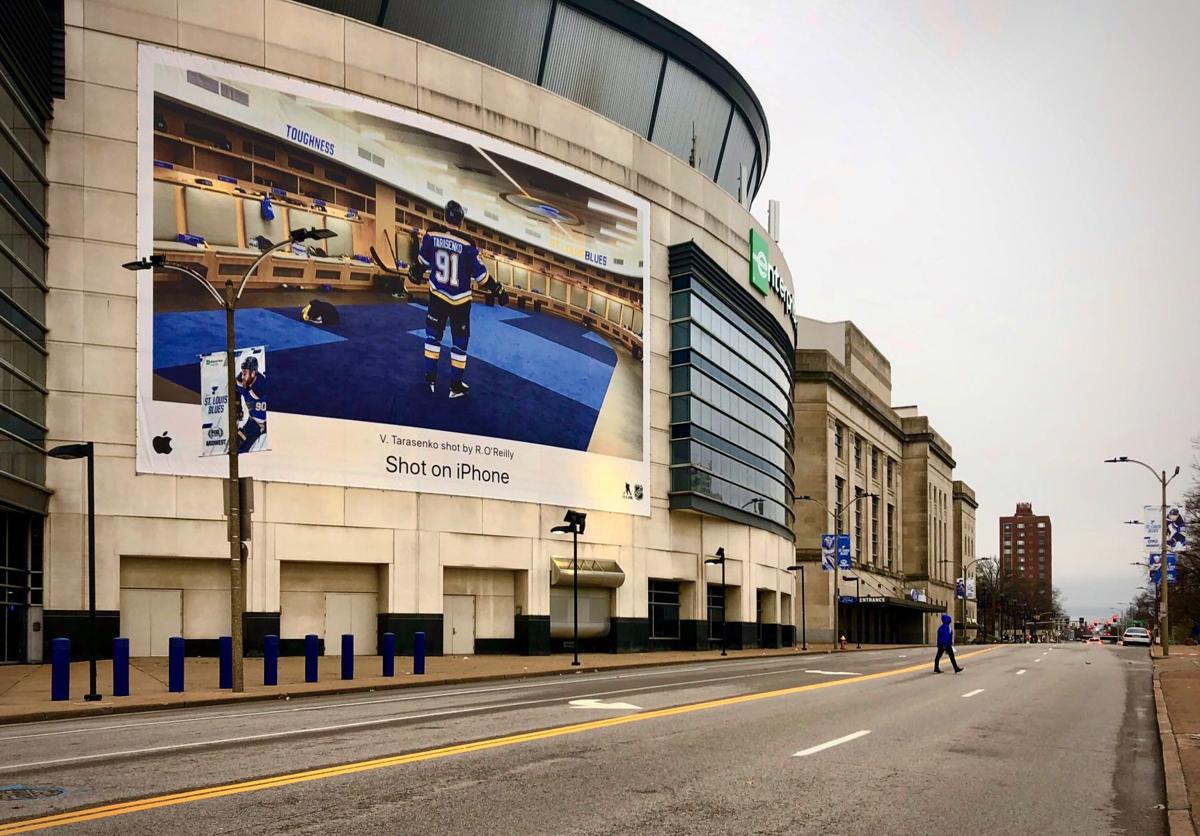 A pedestrian crosses South 14th Street in front of Enterprise Center on Friday, March 20, 2020. The coronavirus has forced the NHL, NBA and MLB professional sports leagues to suspend play in an effort to combat the spread of COVID-19. The ad for the iPhone featuring Blues star Vladimir Tarasenko has been on the arena since last year. Photo by David Carson, dcarson@post-dispatch.com