Who needs cable or satellite? Your TV probably gets 50-plus free channels
0 comments
Share this
{{featured_button_text}}
1 of 5 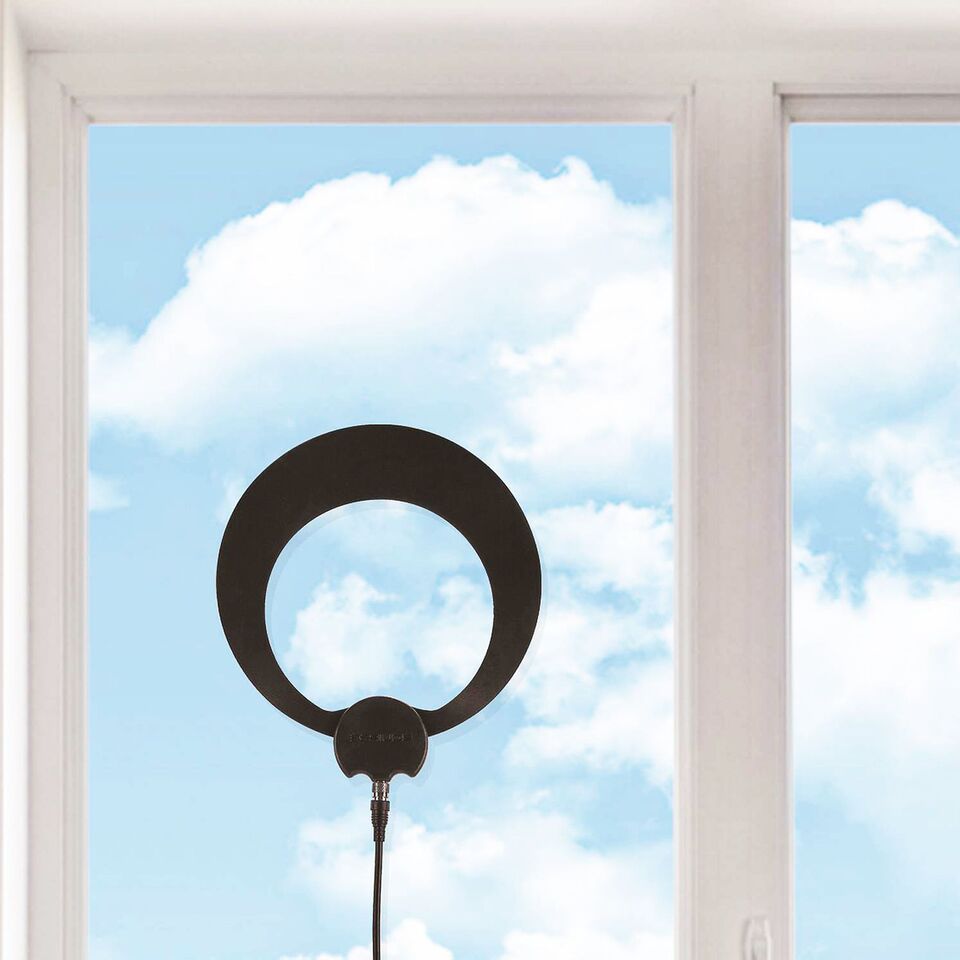 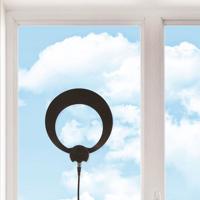 The ClearStream Eclipse indoor HDTV antenna is one of several antennas designed to improve over-the-air television reception made by Antennas Direct of Ellisville. (handout) 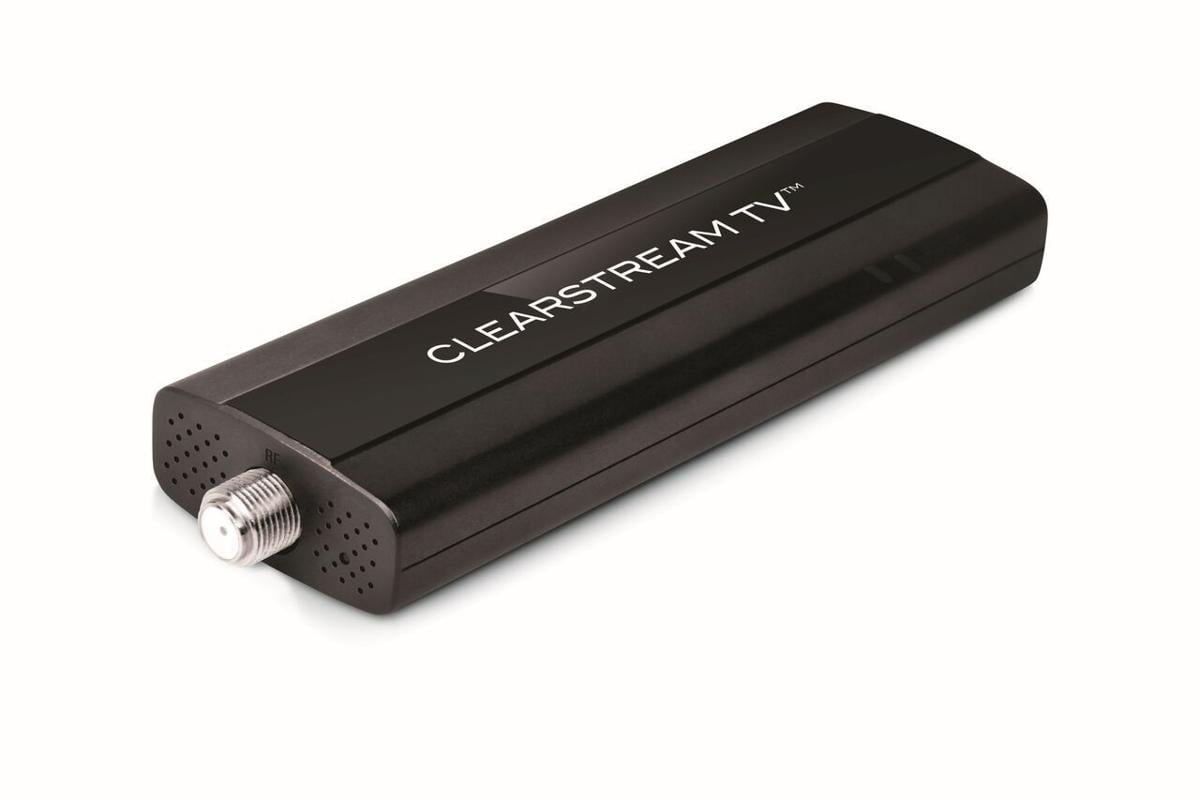 The ClearStream 1MAX UHF/VHF Indoor/Outdoor HDTV Antenna is one of several antennas designed to improve over-the-air television reception made by Antennas Direct of Ellisville. (handout) 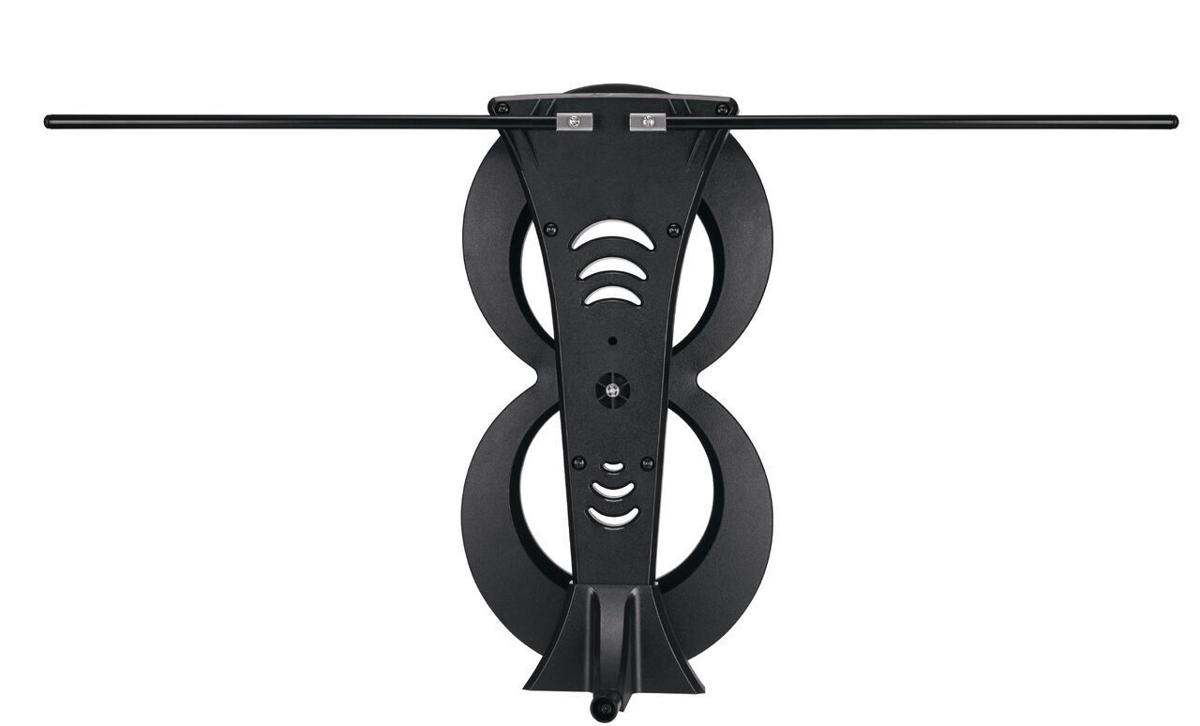 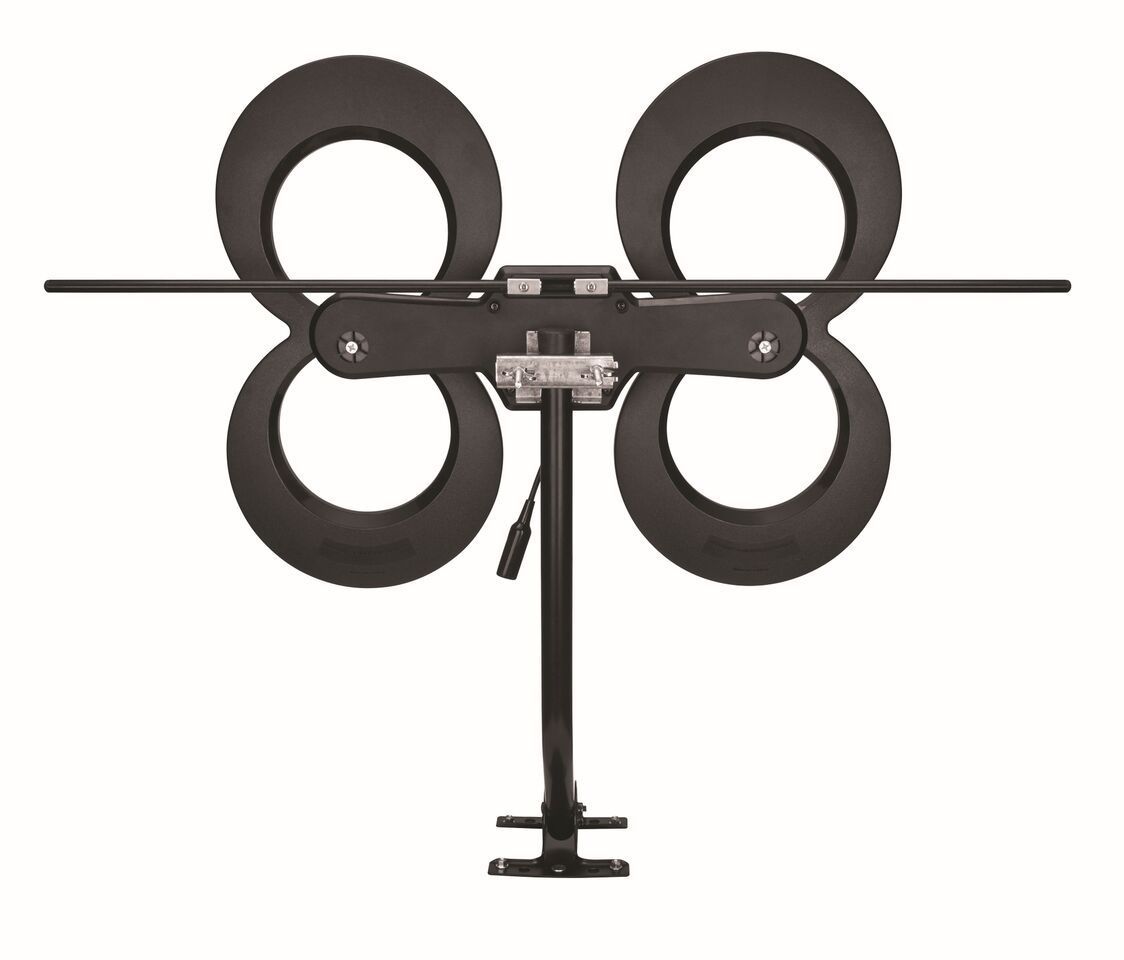 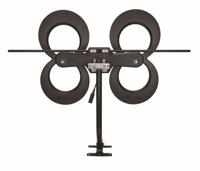 Add a $30 antenna to any TV purchased new in the last 10 years and you’ll instantly have 30 to 60 free channels if you live in or near the city.

“People think it’s a scam or I’m getting them to do something illegal,” said Richard Schneider, president of Antennas Direct, an antenna design and manufacturing company in Ellisville. “They’ll ask, ‘Hey, but what if I get caught?’”

He furrowed his brow, raked a hand through a mass of upward swirling hair and shook his head in mock amazement. He joked that his latest product launch (we’ll explain that in a bit) will really blow people’s minds but with a heavy buy from the retail mega-giant Walmart, he’s not worried.

Most people know that there are some free over-the-air TV stations — “some” being the operative word — but we asked dozens of people and only two people came close to the actual number. It should be noted that one of the people who answered correctly was Canadian, where broadcast television is more ingrained, and the other was 70 years old, a much better demographic for an antenna user.

Others we asked guessed that there were three to 12 free channels.

A National Association of Broadcasters survey revealed that about 29 percent of Americans are unaware that local TV is available for free, even though Nielsen reports for the 2016-17 television season there are about 118.4 million TV households. And according to Nielsen, television programs aired on broadcast networks such as NBC, ABC and CBS are tuned in by millions of more viewers than programs offered by cable networks.

In 2016, Nielsen reported that overall, adults consumed more than 32 hours of television programming per week.

Yet even as we discussed the technology with people on the street, many were confused that the over-the-air channels weren’t part of a cable TV service.

For the record, there are about 50 free over-the-air broadcast stations (although we should note that about five of those are simultaneously broadcasting the Home Shopping Network) available locally if you own an antenna and have a pretty good location for reception. For a full listing of stations and programs visit tvtv.us.

Pacia Anderson, 39, of St. Louis, guessed nine. She doesn’t have cable but does subscribe to Netflix. She remembers the television being on constantly as a child. There was a family routine of “Jeopardy!” playing in the next room while they ate dinner at the table, and then “Wheel of Fortune” would accompany the cleanup and dishwashing.

“Now, it’s actually weird that that’s not part of my routine at all,” Anderson said. “I don’t have cable because I’m pretty sure I would watch it all the time. I don’t want to be a zombie.”

And she doesn’t want her 12-year-old daughter to be even more screen-obsessed, she said. Anderson has enough trouble keeping the girl off the MacBook, tablet computer and cellphone. Instead of traditional, everyday TV watching, she said she usually buys DVDs for an entire season of shows such as “The Walking Dead” at one time and they binge-watch. Then they’re free to read books and watch movies until they can catch up on what happened with their favorite shows the following year. She said that it can feel torturous to wait, though. She hasn’t even watched “Game of Thrones” yet because she’s waiting for the series to end so that she can watch it in its entirety.

Anderson does own an antenna with the traditional “rabbit ears,” but the TV is usually off, and she estimated that she gets fewer than a dozen channels.

Depending on the quality and placement of the antenna and the geography around the home, TV reception can vary wildly.

Schneider has a degree in geography from the University of Missouri and started his career working with a software company mapping positions for the best cellular tower locations. It’s no coincidence that his company has just developed a cellphone app, Antenna Point, to help customers find the best location and position of their antenna for optimal reception. The app should be released soon, and it uses the cellphone’s compass and GPS in conjunction with a map of the Federal Communications Commission database of TV transmitter locations.

Users will be able to pivot and walk around the house or up on the roof with the app to determine the best location. It will provide information on whether or not you need a stronger antenna to get more channels.

Visit AntennaWeb.org, a different company, and enter your address or ZIP code, and you’ll find out the name and number of local stations available for your location. You can also get antenna recommendations. Within a 5-mile radius of downtown St. Louis, the results ranged from 18 available channels from seven over-the-air stations to 53 channels from 17 over-the-air stations.

Every broadcaster can break up their digital signal into subchannels, which are typically highly specialized to attract a particular audience. This is how we get seven stations under the WODK signal: 45.1 Cozi (“Murder She Wrote”), 45.2 Heros & Icons (“Police Story”), 45.3 Movies!, 45.4 Decades (“The Beverly Hillbillies”), 45.5 American Sports Network (NCAA basketball), 45.6 Tuff (“Cook like a Champion”) and 45.7 Evine (home shopping). Schneider said that stations could carve out up to 99 subchannels — theoretically — without degrading image quality. Content quality, however, is another story.

Tim Gebauer, 47, of St. Louis estimated that he gets about 15 channels but he sees other channels “struggling to come through sometimes,” so he guessed 30 channels were available locally. He, too, uses an antenna, rarely watches free over-the-air content and “cut the cord” from cable about 10 to 15 years ago.

He said that he’s not a huge television fan, but he’ll watch documentaries, cooking shows and movies through his Apple TV box or a purchased DVD. When we mentioned that there was a free channel 8.3 Create TV (WSIU) with a steady supply of Bob Ross painting shows, travel and cooking, he said, “Really, that’s definitely my speed.”

With his setup at home, Gebauer said that he and his family can “go a month or more without spending a dime on TV and we decide everything.”

Antenna sales in the U.S. are projected to rise 7 percent in 2017 to nearly 8 million units, the Wall Street Journal reported last week, citing data provided by the Consumer Technology Association. Antennas Direct in Ellisville said that it will account for nearly 1 million of those sales.

Walmart is investing in a new cord-cutting section for consumers abandoning cable in favor of a la carte services such as Hulu, Netflix, Amazon Prime and traditional antennas. Schneider said Walmart ordered Antennas Direct products for about 4,000 locations and their goods will be in about 1,100 Best Buys in addition to Amazon.com and antennasdirect.com.

But he hopes the next big thing in the over-the-air television viewer market will be his latest product launch, ClearStream TV, a $99 digital tuner that connects to your antenna and allows you to pause and rewind regular, live television. It also includes an app that allows you to wirelessly stream live television to all your connected devices, including smartphones and tablets.

It’s not exactly a cord-cutting device though; you’ll still need an internet connection to operate the system wirelessly.

Barbara Nelson, 70, said that she had cable back in the ’80s because she didn’t want to watch commercials. Now that commercials are widespread on cable, she gave it up years ago and never looked back.

“I’ll be damned if I’ll pay to watch commercials, you’ve got to be kidding. No, thank you,” she said from her yard, where a high powered antenna was visible on the roof. It happened to be an Antennas Direct model they bought at RadioShack.

She said she and her husband, Bob, also 70, are not big TV watchers in general, but she is a fan of vintage TV shows such as “Hazel” and PBS shows. She also made a point of calling attention to her shirt in reference to her no nonsense attitude about paying for television. It read, “I’m a grumpy old woman. My level of sarcasm depends on your level of stupidity.”

The ClearStream Eclipse indoor HDTV antenna is one of several antennas designed to improve over-the-air television reception made by Antennas Direct of Ellisville. (handout)

The ClearStream 1MAX UHF/VHF Indoor/Outdoor HDTV Antenna is one of several antennas designed to improve over-the-air television reception made by Antennas Direct of Ellisville. (handout) 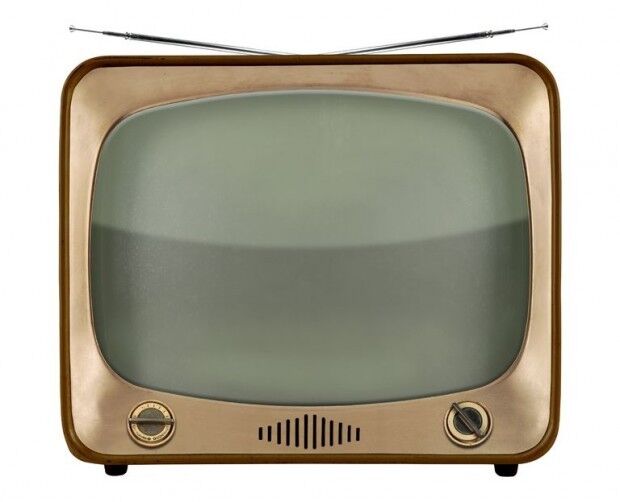 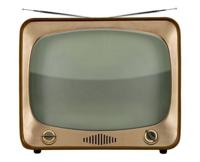