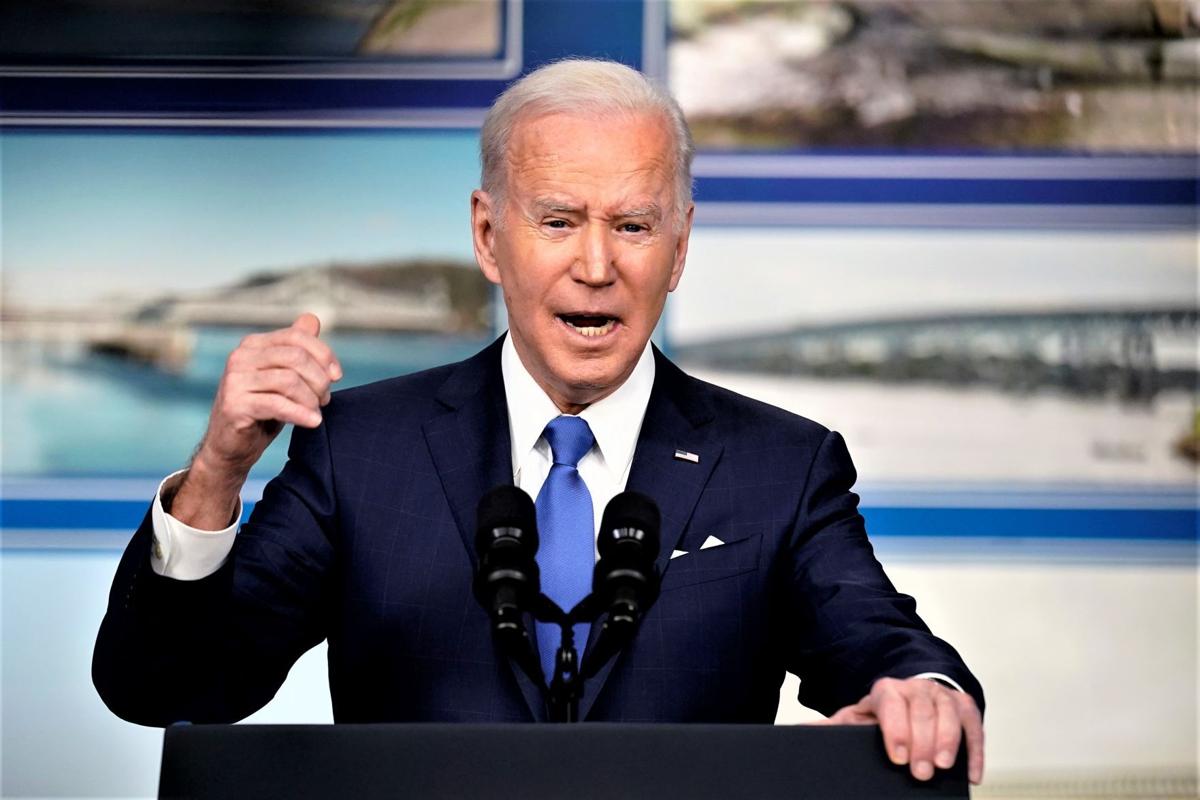 President Joe Biden walks towards Marine One on the South Lawn of the White House in Washington, Friday, Jan. 14, 2022, to travel to Wilmington, Del. (AP Photo/Andrew Harnik)

WASHINGTON (AP) — Concerned but not giving up, President Joe Biden is anxiously pushing ahead to prod people to get COVID-19 shots after the Supreme Court put a halt to the administration's sweeping vaccinate-or-test plan for large employers.

At a time when hospitals are being overrun and record numbers of people are getting infected with the omicron variant, the administration hopes states and companies will order their own vaccinate-or-test requirements. And if the presidential “bully pulpit” still counts for persuasion, Biden intends to use it.

While some in the business community cheered the defeat of the mandate, Biden insisted the administration effort has not been for naught. The high court's ruling on Thursday "does not stop me from using my voice as president to advocate for employers to do the right thing to protect Americans’ health and economy,” he said.

The court's conservative majority all-but-struck down the Occupational Safety and Health Administration’s requirement that employers with 100 or more employees require their workers to be vaccinated against the coronavirus or tested weekly. However, it did leave in place a vaccination requirement for health care workers.

Meanwhile, the White House announced Friday that the federal website where Americans can request their own free COVID-19 tests will begin accepting orders next Wednesday. Those tests could provide motivation for some people to seek vaccination, and the administration is looking to address nationwide shortages. Supplies will be limited to just four free tests per home.

On Thursday, the Supreme Court ruled that OSHA appeared to overstep its congressional authority to implement occupational standards, saying, “Although COVID–19 is a risk that occurs in many workplaces, it is not an occupational hazard in most.”

The mandate was announced last September, accompanied by biting criticism from Biden for the roughly 80 million American adults who hadn’t yet gotten shots

“We’ve been patient. But our patience is wearing thin, and your refusal has cost all of us,” he said. The unvaccinated minority, he said, “can cause a lot of damage, and they are.”

In a statement after the Supreme Court ruling, Biden expressed disappointment with the outcome but said the mandates have already had their desired effect on reducing the number of unvaccinated adults.

“Today, that number is down to under 35 million,” he said of the unvaccinated. “Had my administration not put vaccination requirements in place, we would be now experiencing a higher death toll from COVID-19 and even more hospitalizations.”

While the court left open the possibility for the U.S. to pursue more targeted mandates, White House officials said there were no immediate plans to seek a redo of the regulation.

The United States is already "languishing,’’ with a 60% vaccination rate, near the bottom of peer nations, said Lawrence Gostin, a public health law expert at Georgetown University.

“The OSHA rule was truly the president’s last best shot at significantly boosting the vaccination rate,’’ Gostin said. But the court, “in a very highly partisan way, intentionally tried to handcuff the president in doing what he needs to do.’’

Many large businesses that had already put in place vaccination-or-testing requirements indicated they had no plans to reverse course. But smaller companies said they were breathing a sigh of relief, fearing worker shortages if the OSHA rule had been allowed to go into force.

The Supreme Court decision has “taken a little bit of a burden of worry off of our shoulders,” said Kyle Caraway, marketing director at Doolittle Trailer Manufacturing, which joined a lawsuit by the Missouri attorney general challenging Biden’s policy. About 90% of the 175 employees at the Holts Summit, Missouri-based company had indicated they would refuse to comply with a vaccination requirement, he said.

“It became apparent to us that our team was going to shrink greatly overnight if that vaccine mandate went into place,” said Caraway, who counted himself among those opposing Biden’s policy. Halting production could have forced the company “to consider shuttering our doors,” he said.

The Service Employees International Union, which represents more than 2 million workers, said the court decision was a relief for health care workers but leaves others without critical protections.

“In blocking the vaccine-or-test rule for large employers, the court has placed millions of other essential workers further at risk, caving to corporations that are trying to rig the rules against workers permanently,” the union said.

The renewed debate over vaccination mandates comes as a record number of Americans are hospitalized with COVID-19, the country is averaging nearly 800,000 new cases and 1,700 deaths a day and resistance to vaccines remains a problem, most notably in deeply conservative states like Mississippi, Alabama, Wyoming and Idaho where less than half the population is fully vaccinated.

Hospitals nationwide are suffering chronic staffing shortages and being bombarded with people showing up at emergency rooms in need of virus tests. National Guard troops have been activated in dozens of states to help out at medical centers, nursing homes and testing sites.

A hospital on the edge of the Kansas City area had to borrow ventilators from the state of Missouri’s stockpile and hunt for more high-flow oxygen machines, and the largest county in Kansas said Friday that it’s running out of morgue space — again.

Gostin predicted the court’s action would have grave influence on other federal agencies’ efforts to protect public health, by ruling that OSHA can’t regulate something that would have a huge economic impact without explicit authorization from Congress. And he said states won’t be able to make up for the ruling’s impact.

“If COVID has taught us anything, it’s taught us that states can’t deal with big, bold problems, can’t prevent a pathogen from going from Florida to New York," he said. "These are national problems requiring federal solutions.’’

Psaki said the White House would work with businesses to promote the benefits of vaccination-or-testing requirements and that Biden would highlight successful programs.

“The Court has ruled that my administration cannot use the authority granted to it by Congress to require this measure," Biden said. So "I call on business leaders to immediately join those who have already stepped up – including one third of Fortune 100 companies – and institute vaccination requirements to protect their workers, customers, and communities.”

David A. Lieb in Jefferson City, Missouri, and Lindsay Tanner in Chicago contributed.

Copyright 2022 The Associated Press. All rights reserved. This material may not be published, broadcast, rewritten or redistributed without permission.

Once allies, Stormy Daniels and Avenatti face off at trial

Avenatti, who graduated from Parkway Central in 1989, has pleaded not guilty to the charges in what will be his third criminal trial in two years.

Stocks capped a quiet day of trading with modest losses Friday, even as Wall Street closed the books on another banner year.

‘What is at stake is whether these mandates are going to go into effect at all.’

President Joe Biden walks towards Marine One on the South Lawn of the White House in Washington, Friday, Jan. 14, 2022, to travel to Wilmington, Del. (AP Photo/Andrew Harnik)