Art at a distance: Museums, galleries and fairs are quiet, but artists find ways to keep creating
0 comments
Share this
{{featured_button_text}}
1 of 5

Katherine Bernhardt with her mural in Guatamala. It says "Wash your hands." 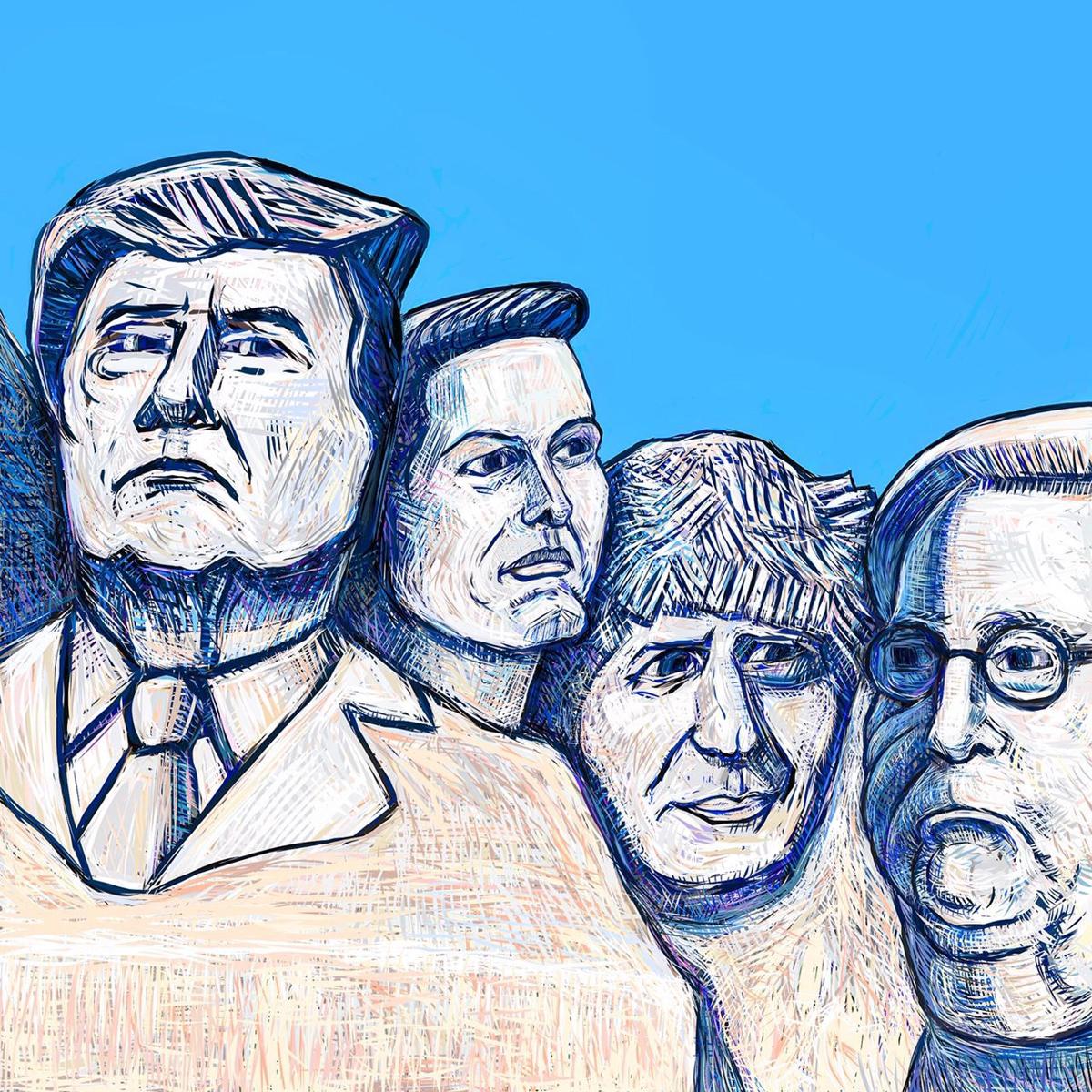 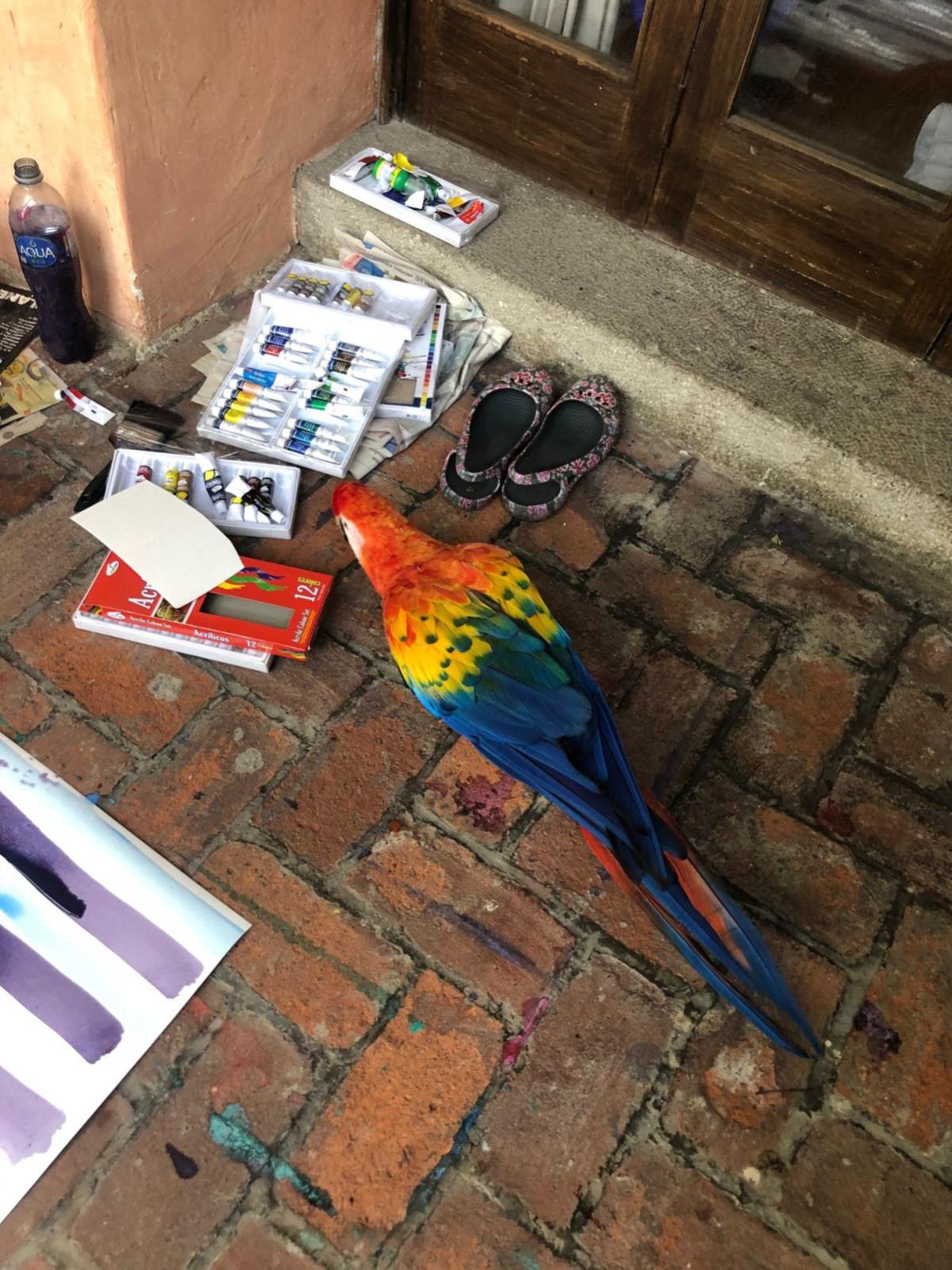 Katherine Bernhardt is working in Guatemala, where her paints attract a curious onlooker. 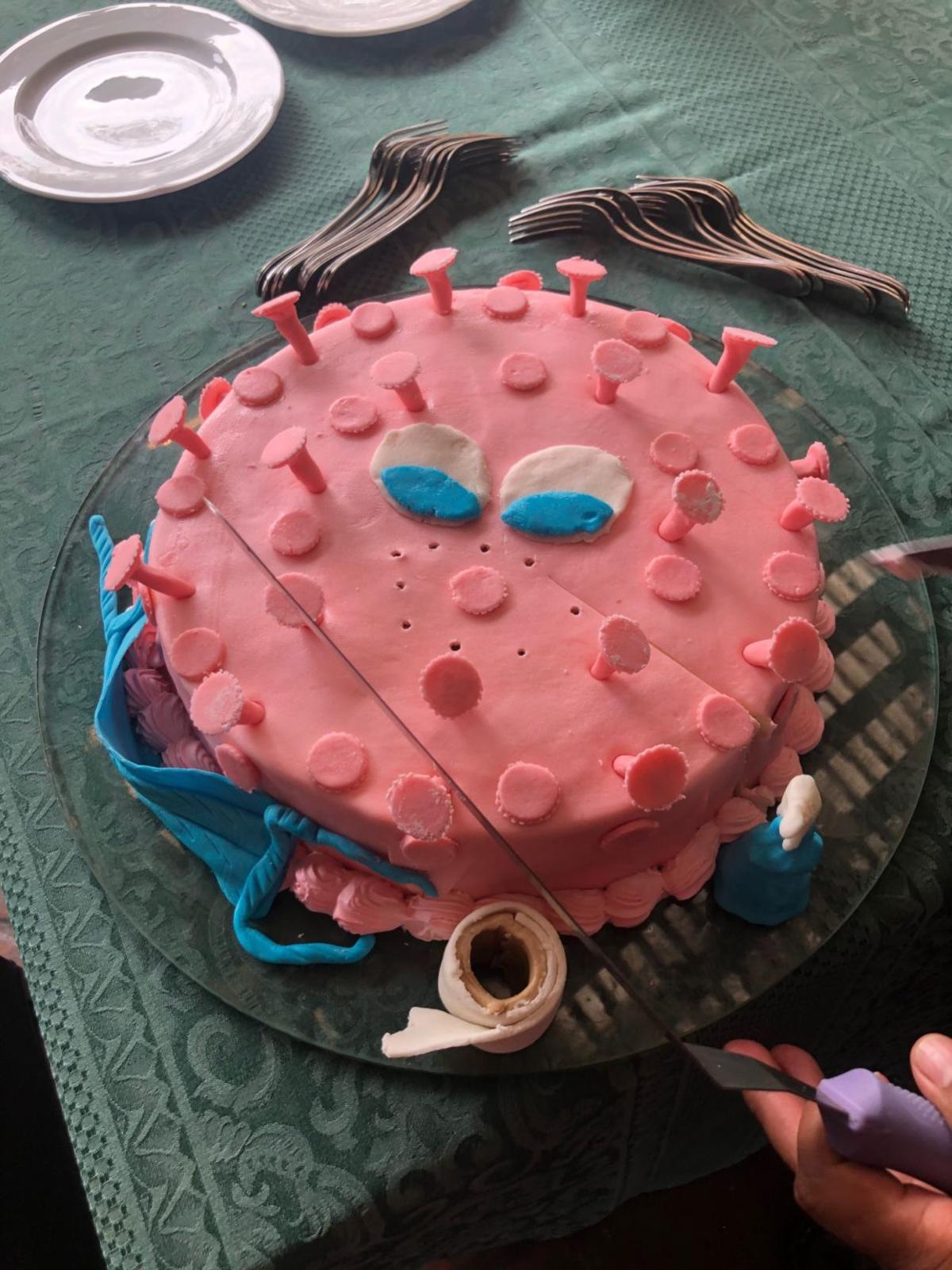 When artist Katherine Bernhardt's son celebrated his 9th birthday in Antigua, the hotel baked him a coronavirus cake. 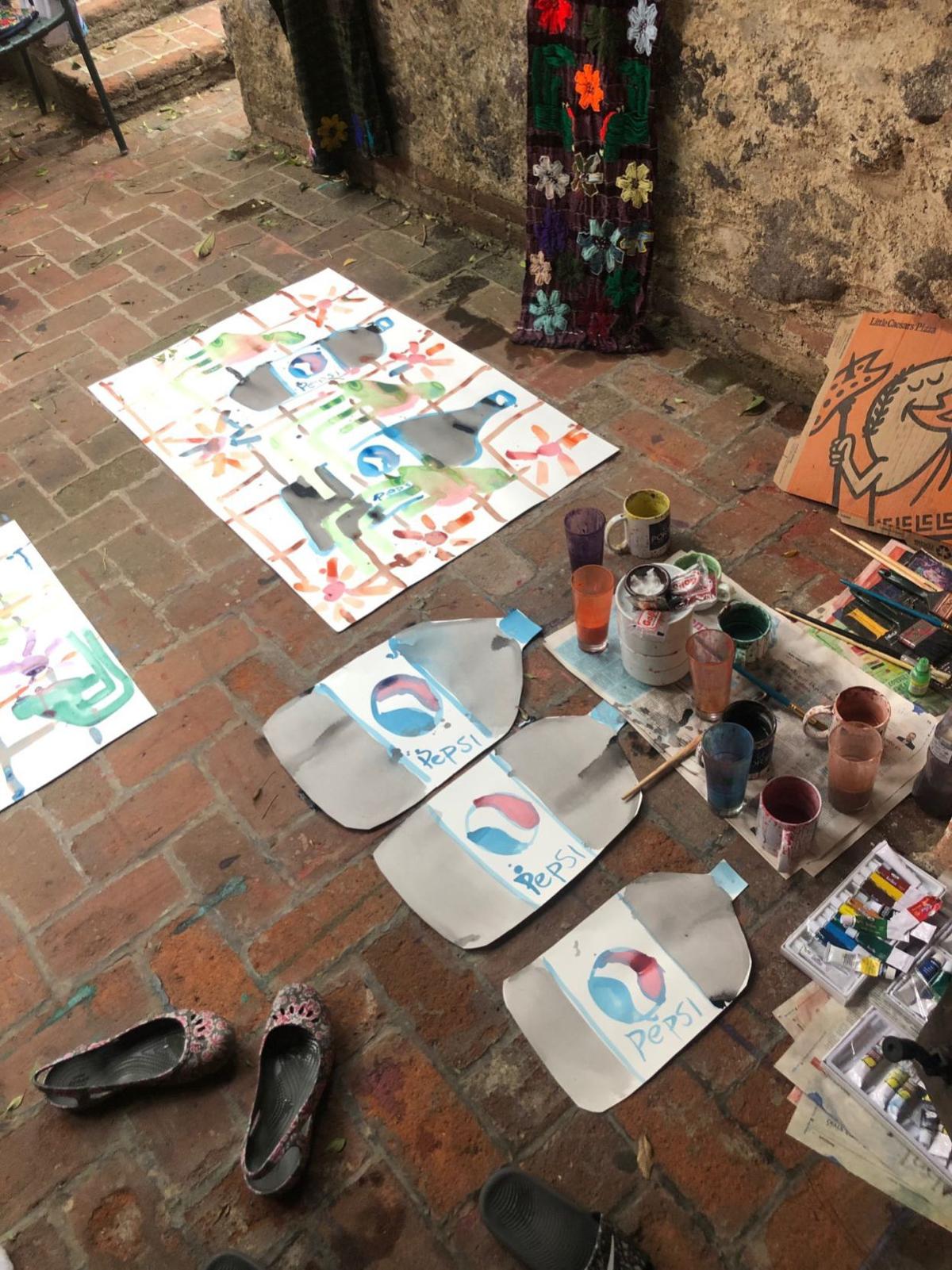 Painter Katherine Bernhardt's work dries outside her hotel in Guatemala.

If there's no public to see it, there's not much point in mounting a public art project.

Like spring art shows and exhibitions, artists' projects have been put off or put online. And St. Louisans have left their artwork in places like San Francisco, Cincinnati and London, waiting for promised shows to go forward.

For the first time in 33 years, Laumeier Sculpture Park, closed until further notice, has had to cancel its popular Mother's Day weekend art fair. It refunded booth payments to artists and makers and instead will try to help sell their photos, paintings and crafts in a virtual show online.

And while some artists are applying for grants and unemployment, others are debating whether vigorously hawking their creations, no matter how valuable and hard-won, is seemly during a pandemic.

"It's overwhelming for everyone," says Jenny Murphy.

But like some artists, she's found that the coronavirus shutdown is not all travesty. Visual artists usually work alone, and now they have plenty of time and reason to do it. Some are already painting coronavirus images or drawing satirical commentary inspired by Rose Garden pronouncements.

Murphy found time to turn half of her garage into a studio space and to create an Etsy product she'd been thinking about for a couple of years.

"There is interesting head space when you don't have a deadline and when you are working in a more open and creative way," she says.

'Keeping the lights on'

Like people everywhere, artists here are faced with looking at that Lysol bottle as half-empty — or half-full.

And continuing work on their art or craft is often essential. "A lot of people are doing it for their mental health as well as to be productive," says woodworker Collin Garrity.

"They need to make it through emotionally," he says. "Anyone who can is trying to support artists."

Garrity knows some artists and makers are applying for emergency grants through places such as the Regional Arts Commission, the Luminary and Artist Relief. But that doesn't seem like a long-term solution during the outbreak, he says.

Garrity, who makes everything from furniture to wooden spoons and bowls, bought an inexpensive studio space a few years ago in the Cherokee neighborhood. But "the moment someone's trying to pay their bills, they aren't going to be buying wall art or wooden spoons anymore," he says.

Curiously, his creations that are selling well are tools for potters. "That's keeping the lights on."

He says potters usually work in school settings or other shared spaces. So now they are at home doing what they can and perhaps renting equipment and buying their own tools.

Garrity is successful enough that he's still paying some other artists part-time to help him ship orders and update his website. One of them is Jenny Murphy, who founded Perennial, a community workshop space that holds classes on creatively reusing objects.

"The moment someone's trying to pay their bills, they aren't going to be buying wall art or wooden spoons anymore."

After about eight years, she stepped down as director a few months ago. She was still teaching a few classes and misses that income. But with the extra time at home in Webster Groves, she decided to launch a natural makeup company that she'd been thinking about for a couple of years.

Her Etsy sales of lip and cheek tint, branded Not Makeup, "ended up being timely because people aren't wearing makeup," Murphy says.

She also has a sense of freedom: "Nothing has a deadline."

She's working, though, on two public art projects — and rethinking whether one seems appropriate during the shutdown.

She received a grant for "Sale Sign," in which garage-sale-type signs would be posted throughout the urban landscape and promote calls to action or resource sharing.

Now, she says, she's "back to the drawing board" because some of the signs encouraged people to interact or to reject typical consumer behaviors. That idea now feels "a little weird" because small businesses are suffering, she notes.

Another project, part of InSITE2020 downtown, will have Murphy transform three storefront windows into murals to depict a new kind of store: “The Department Co.”  InSITE2020's website says the installation by her and four other artists "is postponed."

A St. Louis artist whose new mural has been on display is far from home.

Katherine Bernhardt left her native St. Louis in March to take her son on a spring break trip to Guatemala. She knew they might have to end up staying much longer in their hotel in Antigua.

Before stores closed there, she bought paints and supplies. A friend connected Bernhardt with a building owner who didn't mind her painting a colorful mural reminding viewers to "lava tus manos" (wash your hands).

The creation includes a tropical bird, ears of corn, virus spheres and a bottle labeled "gel."

Last year, when she still lived in Brooklyn, a profile in GQ magazine described Bernhardt’s paintings as "unabashedly fun and proudly illogical, yet executed with thoughtful, painterly chops."

She makes art quickly and thinks her paintings in Guatemala might be worth a show, but she hasn't been in a hurry to return to St. Louis. "It's beautiful here," she says.

She's been creating "tons of work" while her son, Khalifa, a student at Glenridge Elementary School in Clayton, does online lessons. When he recently turned 9, he had a knobbly piñata, and the Antigua hotel baked him a pink-and-blue coronavirus cake.

Bernhardt was to have an show in London, but it has been postponed. She's not sure internet art sales will be successful: "Who wants to buy art online? You want to see it."

While she was escaping the United States, another artist quickly left San Francisco to return to St. Louis before flights were canceled.

Kahlil Robert Irving has had several shows put on hold or canceled. He was in California for an exhibition's opening night right before the state instituted stay-at-home orders. He also has an exhibition at Contemporary Arts Center in Cincinnati that's now shuttered. That center says Irving uses "sculpture, textile and digital media to reflect upon his own biography and the socio-political context of Black life in the Midwest."

But, Irving says of the shutdowns, "I feel like people need to recognize it's not personal."

He's worried not so much about his art but about people taking care of neighbors and staying healthy. "How do we consume something when survival is so much at risk?"

Last week, he was still working on pieces for the Great Rivers Biennial exhibition at the Contemporary Art Museum St. Louis. The exhibition with Irving and two other artists has been delayed until September.

But Irving was also interested in learning a new skill: baking a cake this week for his 28th birthday.

He says the outbreak has been difficult. "My work is anchored in current events and thinking about history and contemporary lives all at the same time. It's kind of hard to think about a future when people are faced with life and death."

Philip Slein's response to the outbreak has been to draw satirical political criticism on his iPad. He posts the cartoons to Facebook with commentary.

Slein, who owns an art gallery in the Central West End, hopes that by summertime his gallery can open for limited hours. "We're trying to hang tight."

His own "creative juices are flowing," but he's also "angry about the state of affairs." Slein finds it therapeutic to draw political caricatures: "I feel like now in the art world it's not the time for pretty pictures."

"My work is anchored in current events and thinking about history and contemporary lives all at the same time. It's kind of hard to think about a future when people are faced with life and death."

LA artist plans to connect with St. Louis novelist William Gass — by typing in the garage

Philip Slein reopened his high-end gallery in the Central West End this week. It's his controversial Instagram art, however, that has captured…

A Black Lives Matter mural created by a contemporary artist in Midtown was painted over Monday by Brightside St. Louis.

Artists were able to keep working, but shutdowns also meant many exhibitions were put on hold.

First round of applications due April 13.

Massive $10 million+ fund to help artists, actors, writers across US

Relief fund will help a wide range of creative workers, says a coalition of arts groups.

Katherine Bernhardt with her mural in Guatamala. It says "Wash your hands." 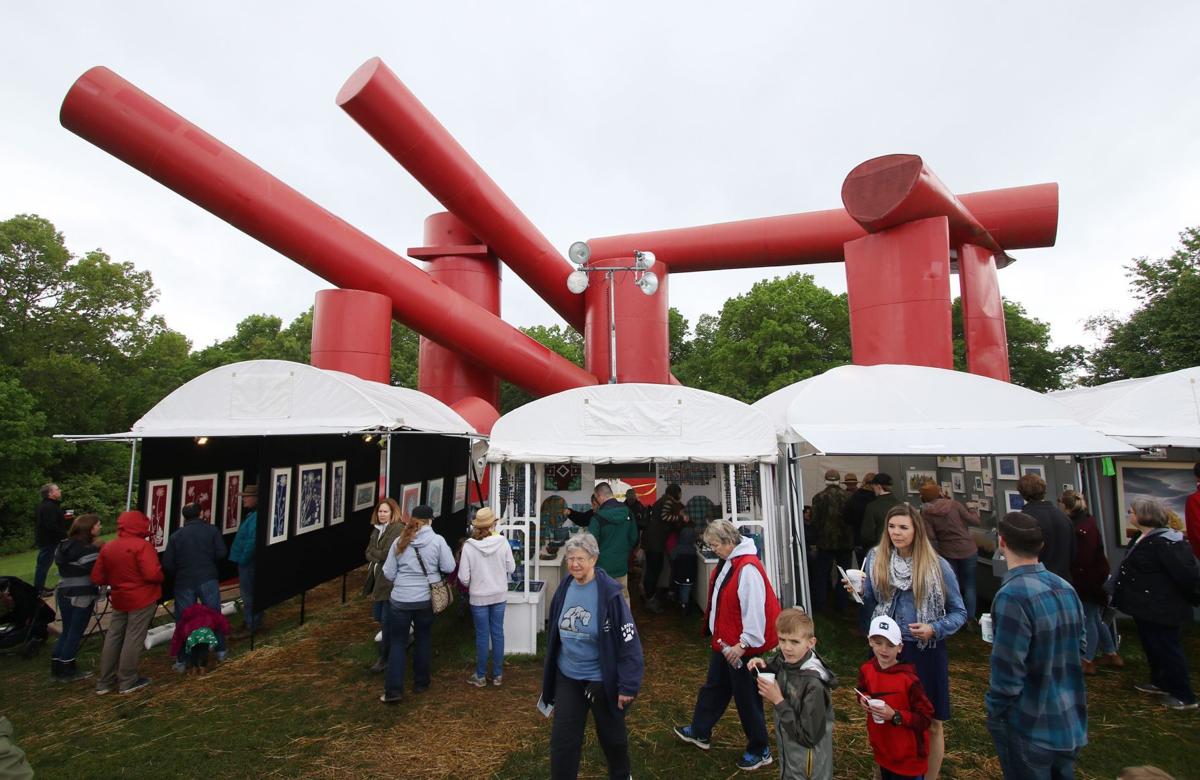 "The Way," a sculpture by Alexander Liberman, towers over a row of booths at Laumeier Sculpture Park's Annual Art Fair in 2019. 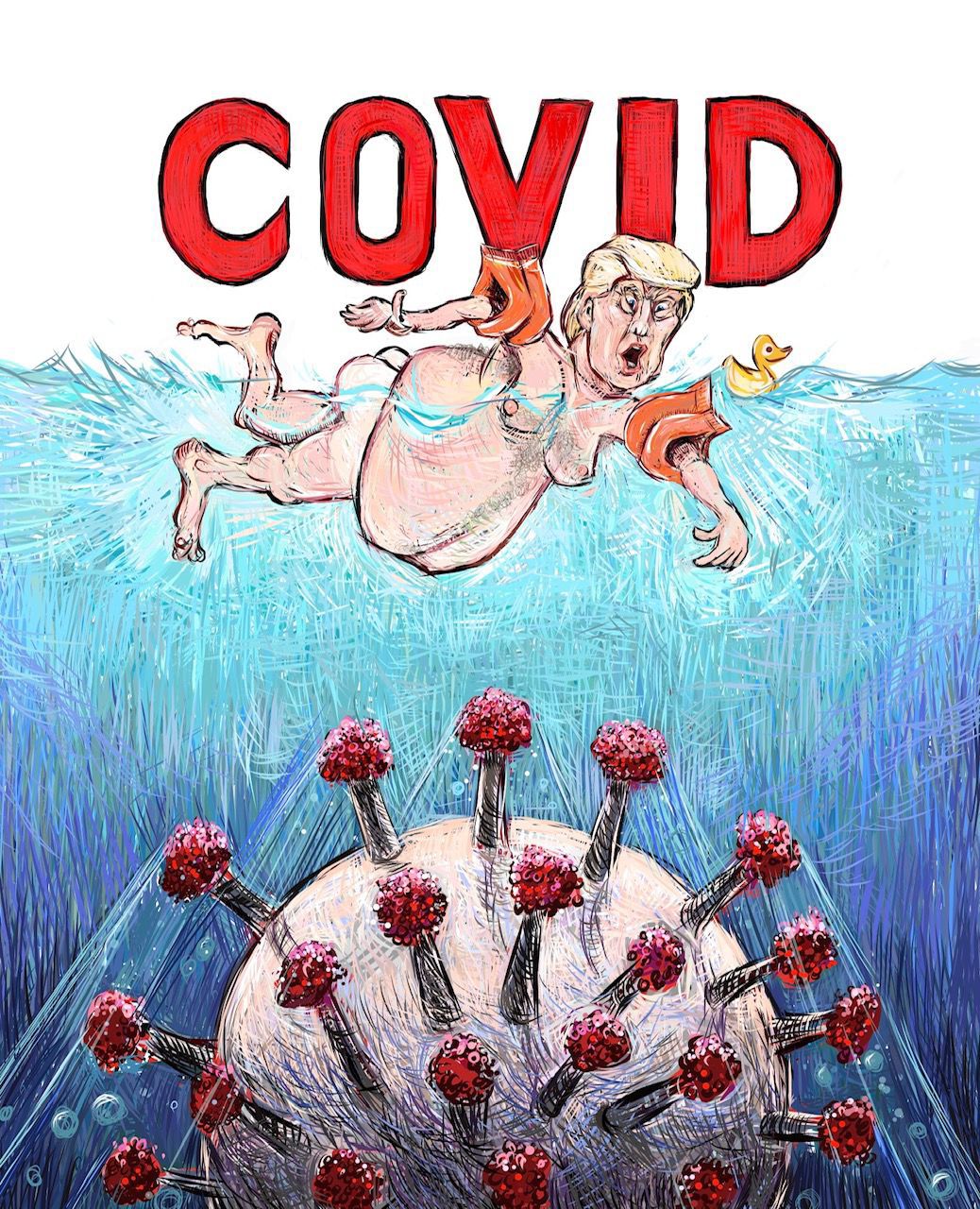 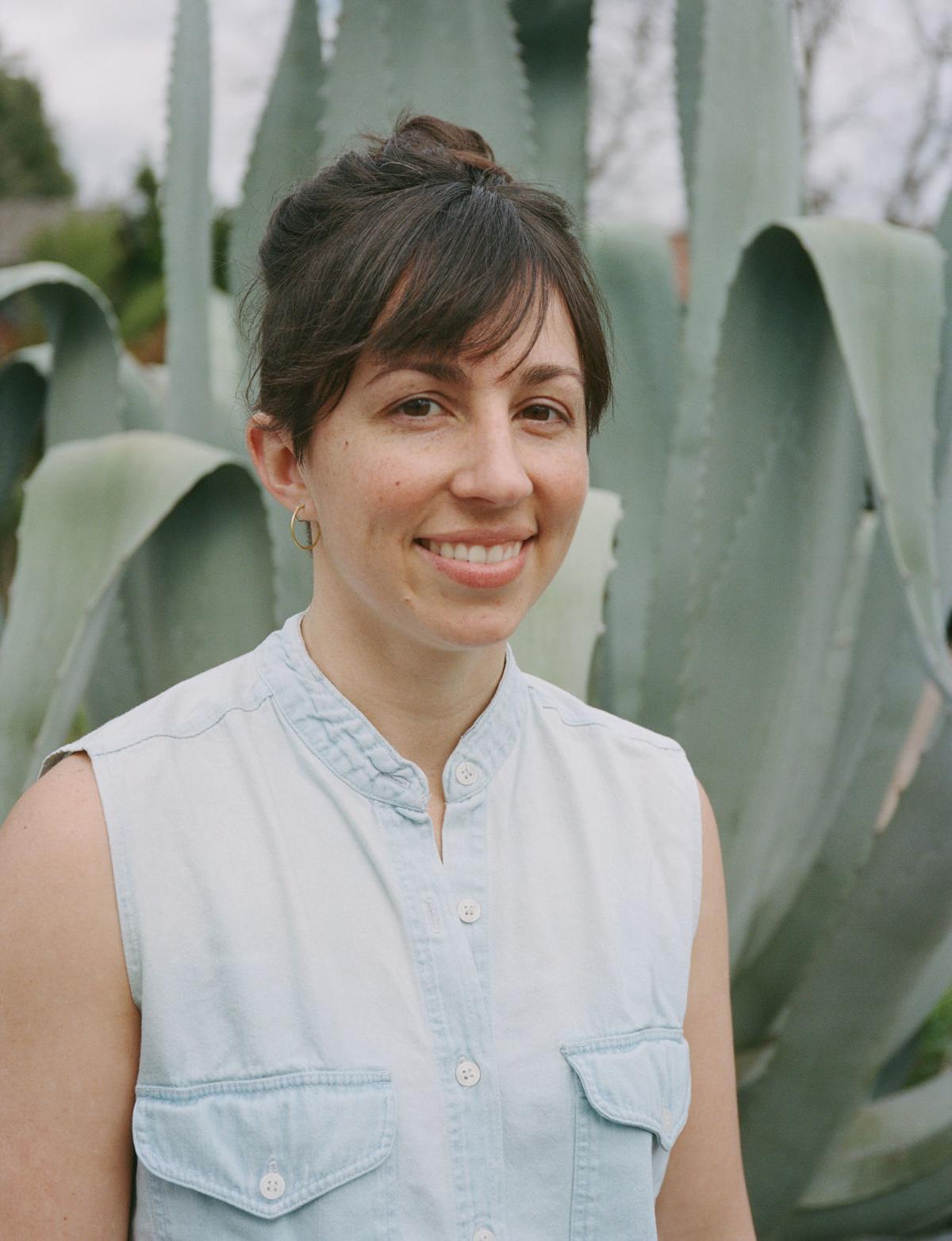 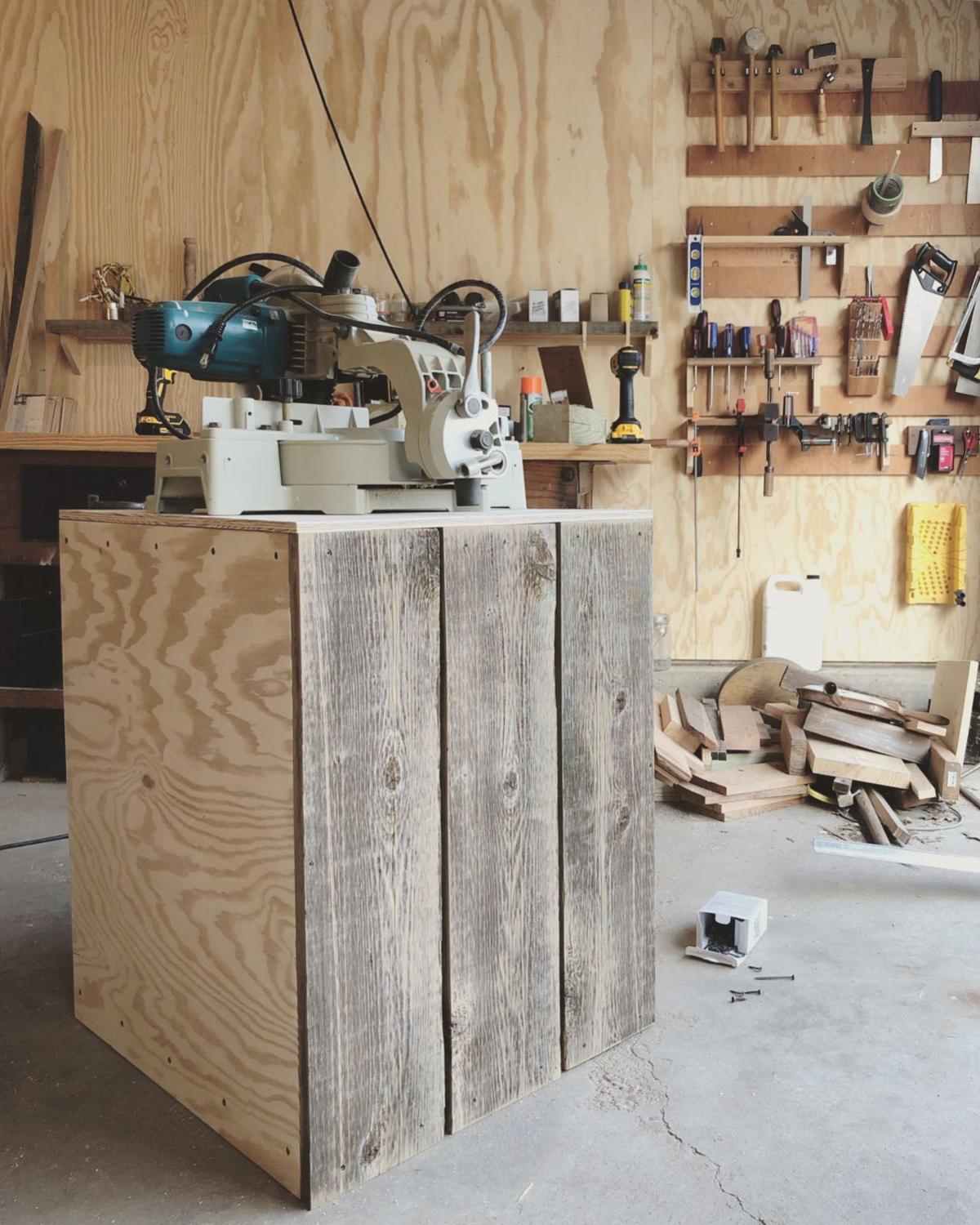 Now in stay-at-home mode, artist Jenny Murphy found time to turn part of her garage into a studio. 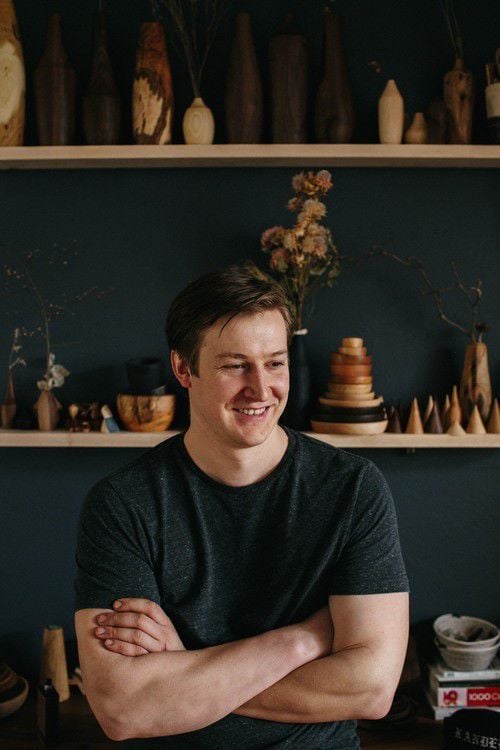 Katherine Bernhardt is working in Guatemala, where her paints attract a curious onlooker.

When artist Katherine Bernhardt's son celebrated his 9th birthday in Antigua, the hotel baked him a coronavirus cake. 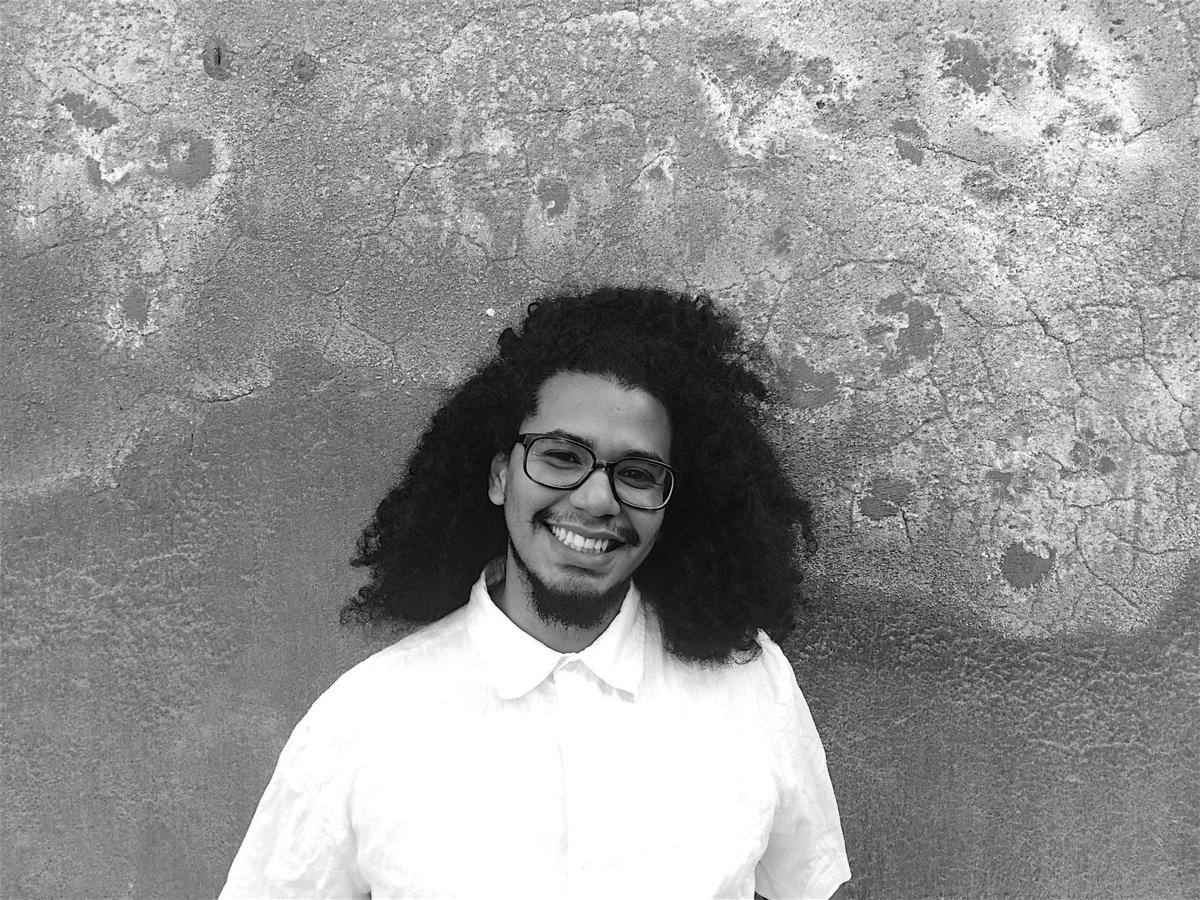 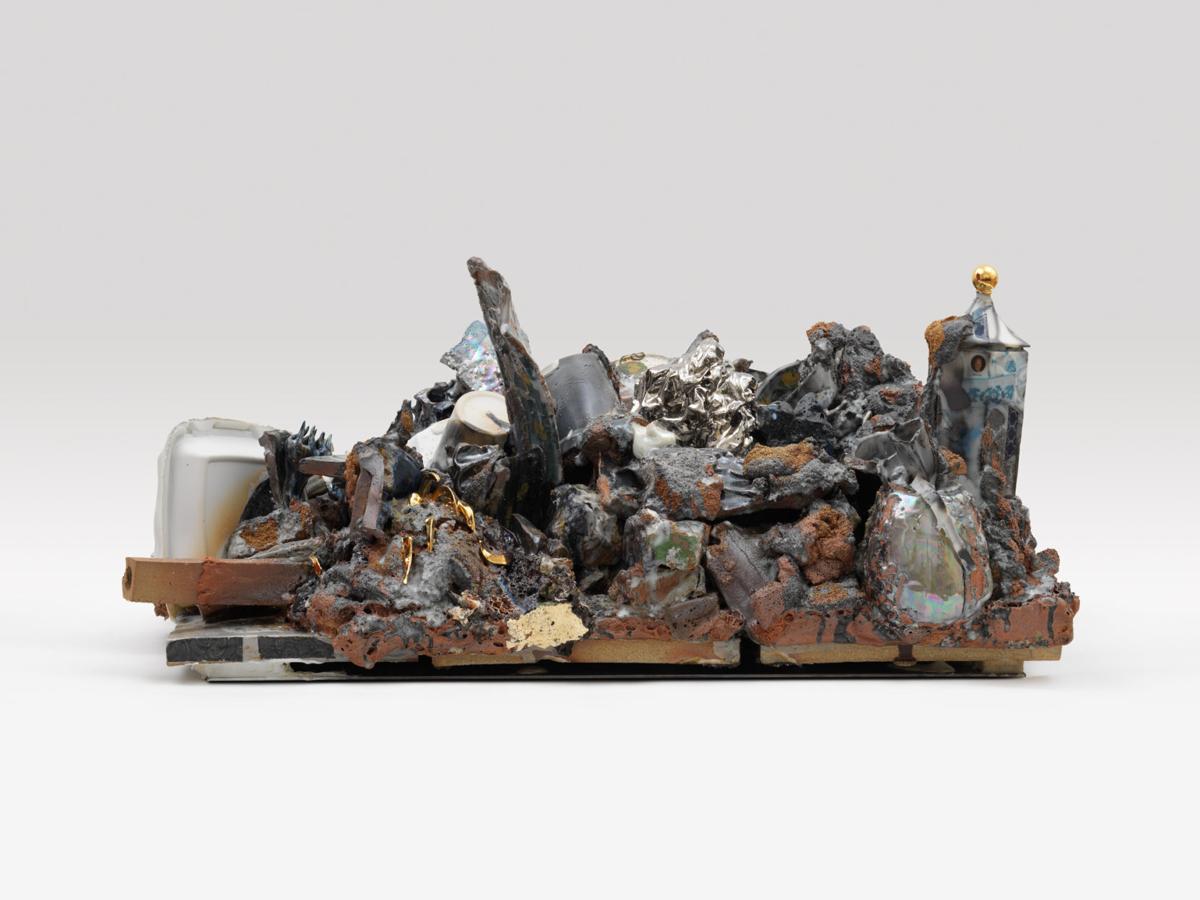 Painter Katherine Bernhardt's work dries outside her hotel in Guatemala.