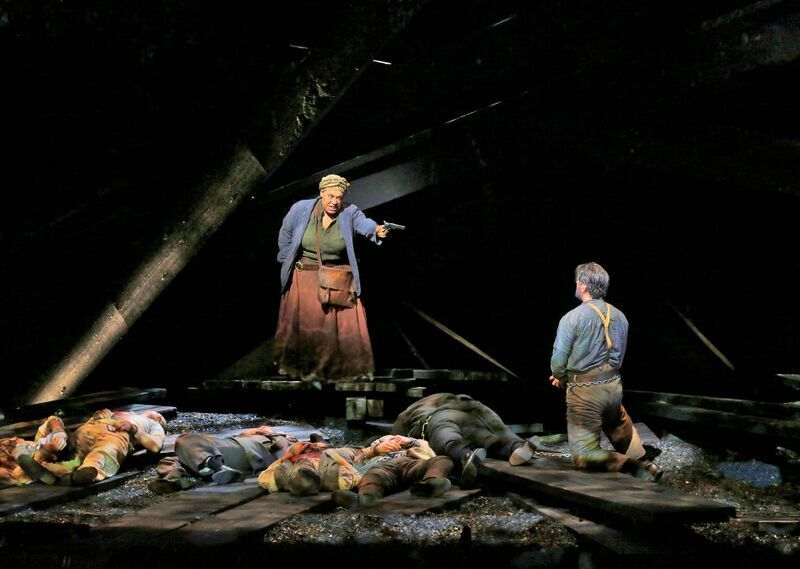 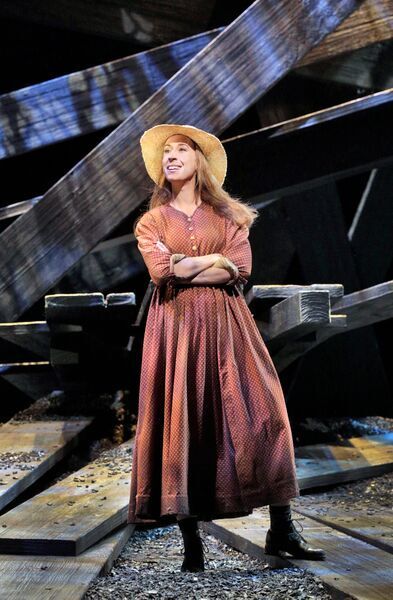 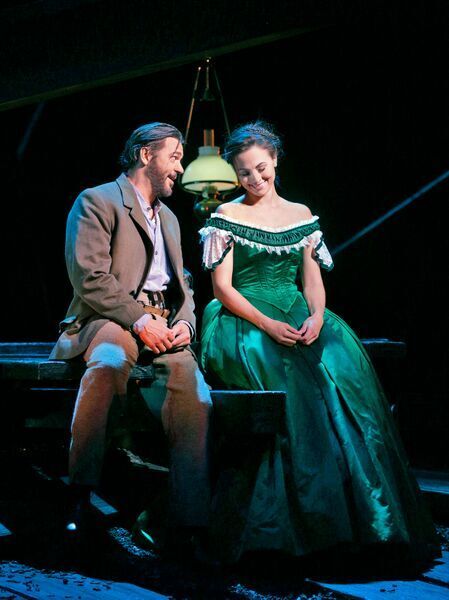 Nathan Gunn as Inman and Isabel Leonard as Ada in 'Cold Mountain' at Santa Fe Opera. (Photo by Ken Howard)

SANTA FE, N.M. • The biggest news at Santa Fe Opera this summer is the world premiere production of “Cold Mountain.”

Composed by Jennifer Higdon, with a libretto by Gene Scheer after Charles Frazier’s award-winning 1997 novel, it successfully distills the story’s essence and sets it to music that is timelessly American, with a modern sensibility and without Coplandesque tropes. It’s been such a hit in Santa Fe that a sixth performance was added.

The story, told largely through flashbacks, relates the odyssey (in a very real sense; there are even sirens) of W.P. Inman (baritone Nathan Gunn), a Confederate soldier. Wounded and sick of war, when he’s due to be sent back to the front he starts walking home to his fiancee Ada Monroe (mezzo-soprano Isabel Leonard) in the hills of North Carolina. He encounters plenty of evil and some kindness, both betrayers and helpers, along the way.

Ada, raised to be a lady in Charleston, is struggling on her farm, her father dead and no men around to help. Ruby Thewes (mezzo-soprano Emily Fons) appears and pitches in, not as a servant but as a partner. (Yes, she pulls the head off a rooster.) Ruby is tough but not hard, and the women become allies.

They need to be because Teague (tenor Jay Hunter Morris) is on the prowl with the Home Guard, hunting for deserters and seeking easy prey. Teague belongs to that class who rise to the top, like scum, in times of war and unrest, grasping at power and the main chance. The story’s arc leads him inevitably to Inman.

The performers are excellent, particularly the four leads, both vocally and dramatically. Leonard, Gunn and, most recently, Fons (Rosina in “Barber of Seville”), were helped in establishing their careers by Opera Theatre of St. Louis. The 40-year alliance between Santa Fe and OTSL continues.

In the new opera, Ada, Ruby and Inman all grow and change as the war takes its violent course. Teague starts out loathsome and stays that way. Their scenes together, in various configurations, all had real chemistry.

There are a lot of characters, and even the smaller roles have been carefully cast. They include the versatile baritone Kevin Burdette as A Blind Man and Ruby’s reformed-reprobate father, Stobrod; stentorian tenor Roger Honeywell as a false man of God, the Rev. Solomon Veasey; soprano apprentice Chelsea Basler as the threatened Sara, whose fatherless infant is her life; and mezzo Deborah Nansteel, in a powerful scene, as Lucinda, an escaped slave.

There are also assorted Confederate soldiers, chain gang guards, the aforementioned sirens and a fair chunk of the Union Army. The men’s chorus sang well under chorusmaster Susanne Shelton. Conductor Miguel Harth-Bedoya brought it all together from the pit, with help from the excellent orchestra.

Most of the accents were a reasonable approximation of a Southern hill inflection; Leonard, however, did not sound at all like a Charlestonian.

Higdon is best known for her instrumental work, and “Cold Mountain” stands out for the evocative quality of the orchestration. With her first opera, Higdon has taken a big step forward in her vocal writing, with plenty of eminently singable passages, a lovely aria for Ada and a remarkable chorus of Southern war dead.

Making both female leads mezzos was an interesting choice, but it proved to be a sound one. Clear diction is difficult for high sopranos; a lower tessitura made that job easier, and both Leonard and Fons have beautiful instruments as well as fine acting chops. Gunn, his dark baritone perfect for the part, was manly without being macho and decent without being weak. He embodied Inman in a most satisfactory way.

Robert Brill’s effective scenic design used planks, beams, a raked stage and a steep ramp to represent everything from a farm to a river to a killing field. Elaine J. McCarthy’s phenomenal projection design helped, whether turning the proscenium into a starry sky or a realistic blizzard, and the handrail on the ramp doubled as a place to project times and locations as the story skipped around. The opera is a co-commission by Santa Fe, Opera Philadelphia and Minnesota Opera, in collaboration with North Carolina Opera.

The ending is true to the book, as is appropriate: Grief gives way to acceptance, and a new generation steps forward. “Cold Mountain” is a powerful evening in the theater, a compelling statement on the evils of war that holds its audience while making them think.

Richard Strauss’ “Salome,” after the Gospel according to Matthew by way of Oscar Wilde, weds an unspeakably vile story to irresistibly gorgeous music.In the Bible, we’re told that the tetrarch Herod Antipas murdered his brother Herod Philip and married his sister-in-law, Herodias. John the Baptist — here known as Jochanaan — used his prophetic voice to denounce this sin and was murdered for his pains after Herodias urged her daughter to dance for Herod and then demand the prophet’s head as payment. The historian Josephus tells us that Salome was respectably married after that and died young; Wilde turned her into a sexual obsessive who died even younger.This production, directed by Daniel Slater, was notable for its psychological slant. The Dance of the Seven Veils was changed from a high-class striptease to a re-enactment of Philip’s death and the young Salome’s trauma. Salome went into the cistern in which first Philip and then Jochanaan were imprisoned; it resembled a basement, with a table covered with papers on which the prophet writes his screeds.

The courtiers and servants were never front and center and soon disappeared (if the Jews screamed when Herod offered Salome the Veil of the Temple, I didn’t hear them) as Slater focused exclusively on the Herodian trio and Jochanaan’s dismembered body. It was an unusually bloody, and orgasmic, interpretation.

On Thursday night it was musically excellent, powerfully conducted by St. Louis Symphony Orchestra music director David Robertson. The acoustically friendly design generally kept voices from being overwhelmed by Strauss’ big orchestra, although there were moments when the musical wave overcame the singers.

Soprano Alex Penda was vocally strong and physically convincing in the title role; it’s too bad she didn’t get to dance. Bass-baritone Ryan McKinny’s bespectacled Jochanaan got to keep his clothes on and thundered his imprecations credibly.

As Herod, tenor Robert Brubaker sang almost too well for the role; mezzo-soprano Michaela Martens was a properly disdainful Herodias, but less imperious than she might have been. Among the many smaller roles, tenor Brian Jagde’s Narraboth and the First Soldier of bass-baritone Nicholas Brownlee were standouts.

The scenic and costume designs were by Leslie Travers. The rotating silver box of the cistern dominated the stage; the late 19th-century costumes didn’t add anything, but didn’t detract.

Many of the names and faces involved are familiar from Opera Theatre of St. Louis

Nathan Gunn as Inman and Isabel Leonard as Ada in 'Cold Mountain' at Santa Fe Opera. (Photo by Ken Howard)