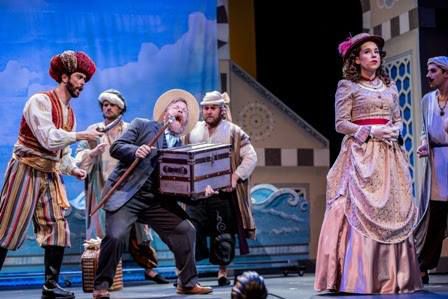 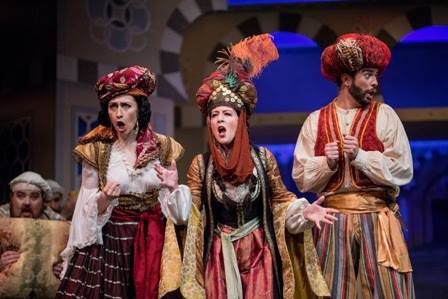 On a frigid January weekend, there’s nothing like a warmly comic opera to brighten the spirits.

Mustafà, the Bey of Algiers, is bored with his long-suffering wife, Elvira. He decides to marry her off to his Italian slave, Lindoro, and commands Haly, captain of the Algerian Corsairs, to find him a beautiful Italian woman to wed instead.

Haly comes up with the shipwrecked Isabella, traveling in search of none other than her lost lover, Lindoro, and accompanied by her elderly admirer, Taddeo. Isabella is smart, wily and resourceful, and manages to plot a hilarious conclusion that turns out happily for everyone involved except Mustafà.

The production started off slowly with some orchestral sloppiness during the overture. (In the first act, there was some choral sloppiness to go with it.) Although he has a fine voice, bass-baritone Alex Soare’s Mustafà was wooden to begin with, prone to semaphoring and not always entirely with conductor Darwin Aquino.

But Aquino pulled everyone together, and things perked up quickly, for a successful show.

The perking-up process began with the second scene, as a marionette ship came bouncing over dancing waves, to the joy of Mustafà’s pirates. Scenic director Scott Loebl’s practical sets and stage director Eric Gibson’s clever moves brightened the picture for the rest of the opera.

Some of it, like the Act I finale (in which the characters express their bewilderment at Isabella’s takeover by imitating the sounds of crows, bells and drums, among other onomatopoeic offerings) was made easy by Rossini and his librettist, Angelo Anelli. Other sight gags were originals.

Mezzo-soprano Kate Tombaugh, as Isabella, doesn’t have a large voice, but it’s attractive and well-produced. Her coloratura was particularly impressive. Her personality was the engine the story needed to gain traction, and her interactions with Soare were amusing.

Tenor Gregory Schmidt was fluid-voiced and amiable as Lindoro, a stalwart assistant to his Isabella. Nicholas Ward displayed a fine baritone and good comic timing as Tadde, while Jason Mallory’s Haly sang well and was filled with suitably comic menace.

Soprano Holly Flack was a sympathetic Elvira, although a little shrill in some of her high notes. Zulma, Elvira’s sidekick, is a small role, but mezzo-soprano Felicia Gavilanes made the most of it.

Costume designer JC Krajicek came up with some clever duds, particularly for the quartet of harem lovelies. Natali Arco’s lighting was well-done and evocative.