CHICAGO — “Hamilton” ends its run of over three years here on Sunday as the most financially and, arguably, artistically successful theatrical attraction in the history of Chicago. By the time Miguel Cervantes, its star from the beginning, takes his final bow as Alexander Hamilton around 5 p.m. at the sold-out CIBC Theatre, the Chicago company of “Hamilton” will have rung up more than $400 million in gross sales at the box office.

No other show in the Loop ever has come close to that kind of money. Or to such popular appeal and critical acclaim.

“I feel joy and pleasure and satisfaction,” the show’s lead producer, Jeffrey Seller, said in a recent interview. “We all did this together — and I am including the city of Chicago and its theatergoers in that — and we all did this just right. I feel like this was a theatrical celebration, a family celebration and a celebration of our democracy.”

Seller argues that, in fact, the Chicago run of “Hamilton,” an optimistic and unifying hip-hop musical about the Founding Fathers, has been the most financially successful show in any city in the world, in any era, during the past three years.

That is thanks to the fiscal drawing power of “Hamilton” combined with the much larger capacity of the CIBC Theatre (formerly, and more famously, the Shubert Theatre), as compared with the Richard Rodgers Theatre in New York, where “Hamilton” continues to play on Broadway. Over time, of course, the Broadway gross will far eclipse what happened in Chicago, but for the last three years and three months, Chicago has been the biggest generator of Broadway wealth — aptly with a show about the first U.S. secretary of the treasury.

“It has been pretty extraordinary,” said the show’s creator and author Lin-Manuel Miranda. “And it has been my entry point for falling in love with Chicago.”

Seller said “Hamilton” has played to 100% of its weekly gross potential, a stunning statistic, even though it is made possible by the established Broadway practice of excluding so-called premium seats from those calculations.

Behind the hype: 'Hamilton' deserves all the praise it's earned

The acclaimed musical has come to Chicago

Early in the run of “Hamilton,” and over all of the holiday peaks, the company was selling most of its weekend center orchestra seats for premium pricing of several hundred dollars, depending on the date and the seat. That masked the very few weeks, such as last winter and early this fall, when paid “Hamilton” attendance dipped to around 90%. Over the course of the run, though, unsold seats have been rare. “Hamilton” did virtually no discounting, aside from offering its “EduHam” student programs at some of its matinees through its nonprofit arm, as supported here by several Chicago foundations. And by the standards of its peers, it spent very little on advertising, only mounting a significant marketing campaign in its final year.

“Hamilton” will not be the longest running major Broadway show in the history of Chicago. That honor still belongs to “Wicked,” which played about three months longer here between 2005 and 2007, a justifiable point of pride noted recently to the Tribune by its lead producer in Chicago, David Stone. The dedicated Chicago company of “Wicked” grossed about $200 million, a phenomenal sum in an era when Broadway ticket prices were much less costly.

But “Hamilton” has been in a league all of its own.

The company has not released the running costs, or weekly “nut,” for its Chicago production, but by the standards of Broadway musicals, this is not an especially large nor costly show. Based on publicly available data, media reports and an allowance for inflation, the show now costs about $700,000 a week to run in New York and the Chicago costs likely are similar, meaning that, even by the most conservative estimates, the Chicago production will have returned at least $200 million to its creators, producers and investors.

But that wealth has been shared by the hotels, restaurants, stores and workers in the Loop and beyond, as well as by the state of Illinois and the city of Chicago, which now together take 10% of the ticket price, an amusement tax rate that is among the highest in the nation and that increased during the run. It also has benefited the theater’s landlord, Broadway in Chicago, which has partnered on its marketing and customer relations.

“More than half the audience came from 100 miles away or more,” said Lou Raizin, president of Broadway in Chicago. “We have all been fortunate.”

Economic-impact studies of arts attractions are common, and groups such as the Chicago Loop Alliance and the Arts Alliance Illinois have used varying multiples to try and estimate how much knock-on spending a show such as “Hamilton” generates; on average, those controversial multiples would put the impact well into the billions of dollars. In New York, there is substantive and widely accepted data pointing out that the theatergoer to a Broadway musical spends on average at least the same amount as the ticket price on transportation, restaurant and accommodations, a reasonable assumption for the Chicago “Hamilton,” given the prevalence of visitors in the audience. That means more than $100 million a year will disappear from the Loop economy.

Unless Raizin and his associates can find a replacement show.

That won’t be easy. Broadway does not yet have a similar musical to deliver and may not for years. And theater producers make a wide variety of decisions on where, or if, to move their hits for extended post-Broadway productions. Cities compete with vigor for those rare money-spinners — the British producers of “Harry Potter and the Cursed Child,” for example, picked San Francisco for their first post-Broadway sit-down, likely in part because of its accessibility to the show’s fervent fan base in Asia.

Chicago isn’t always on top of those lists, especially with its increased tax burden.

But it got “Hamilton” first. And delivered the results accordingly.

Could “Hamilton” have run longer in Chicago? Most definitely, if running at a profit were the only aim. But after many months of exclusivity, the separate touring companies have now been booked in close-by cities such as Milwaukee, slowly eroding Chicago’s distance from competing markets. And Seller and his associates also have to protect a long-term brand that still commands premium pricing in New York and London; a perceived scarcity that would be threatened by empty or discounted seats in Chicago. In many ways, “Hamilton” is sold as a sophisticated luxury good, albeit one with a philanthropic and educational arm that has, Miranda said, made the show available to more than 30,000 students in Chicago, mostly from the Chicago Public Schools.

“That program has been especially great there,” Miranda said, “right from the beginning.”

'Hamilton: The Exhibition' is a treat for history, theater and museum lovers

The mightiest navy on Earth surrounds the island you call home.

There was also a cautionary tale in “Hamilton the Exhibition,” an ill-fated and expensive attempt by the “Hamilton” team to spin the show’s popularity into demand for a high-quality history exhibition on Alexander Hamilton and his fellow creators of American democracy. Undermined by a problematic Northerly Island location for its Chicago debut and long delays before its arrival, the $13 million exhibition fizzled at the box office and closed much earlier than hoped, despite many admiring reviews and its breathtaking creativity. Its future remains in limbo; its fate suggests that audiences want “Hamilton,” the musical, and that no substitute will do.

What happens now to Chicago’s physical production of the show itself? The Chicago production is moving to Los Angeles for a reprise run there beginning in March, in essence becoming a third U.S. touring company of “Hamilton.” Some of the actors also will go west; others likely will be cast on Broadway, in touring companies, or in subsequent companies in development for 2021 in Sydney, Australia, and, at some point shortly thereafter, Germany. Some will go on to other Broadway shows, their resumes burnished by the biggest hit of modern-day Broadway.

And, of course, one of the “Hamilton” tours will return to Chicago. There will be a break, Seller said. But it will be back.

It won’t be quite the same next time. And it surely won’t star Cervantes, who has become a bona fide Chicago celebrity as he played this role for longer than its creator. Miranda, a booster of Cervantes’ career, says he was “not surprised at all” by Cervantes, an actor from New Jersey.

On Sunday, the mood is likely to be celebratory and melancholy; January always is the cruelest month for Broadway shows, and the end of the holiday period often sees closings. This, though, is the first “Hamilton” engagement to close. And many involved say they are emotional.

“The company here felt like our relatives in Chicago,” Miranda said. “I will miss the hotel across the street where I stayed, and my pilgrimages to see the Seurat and to the Puerto Rican neighborhood. But I couldn’t be more thrilled with how Chicago embraced Miguel, his family and this cast.”

And Cervantes, the man doing the heaviest lifting on a nightly basis in Chicago? How does he describe this exit?

“Beautiful and tragic,” he said. “It squeezes on my heart.” 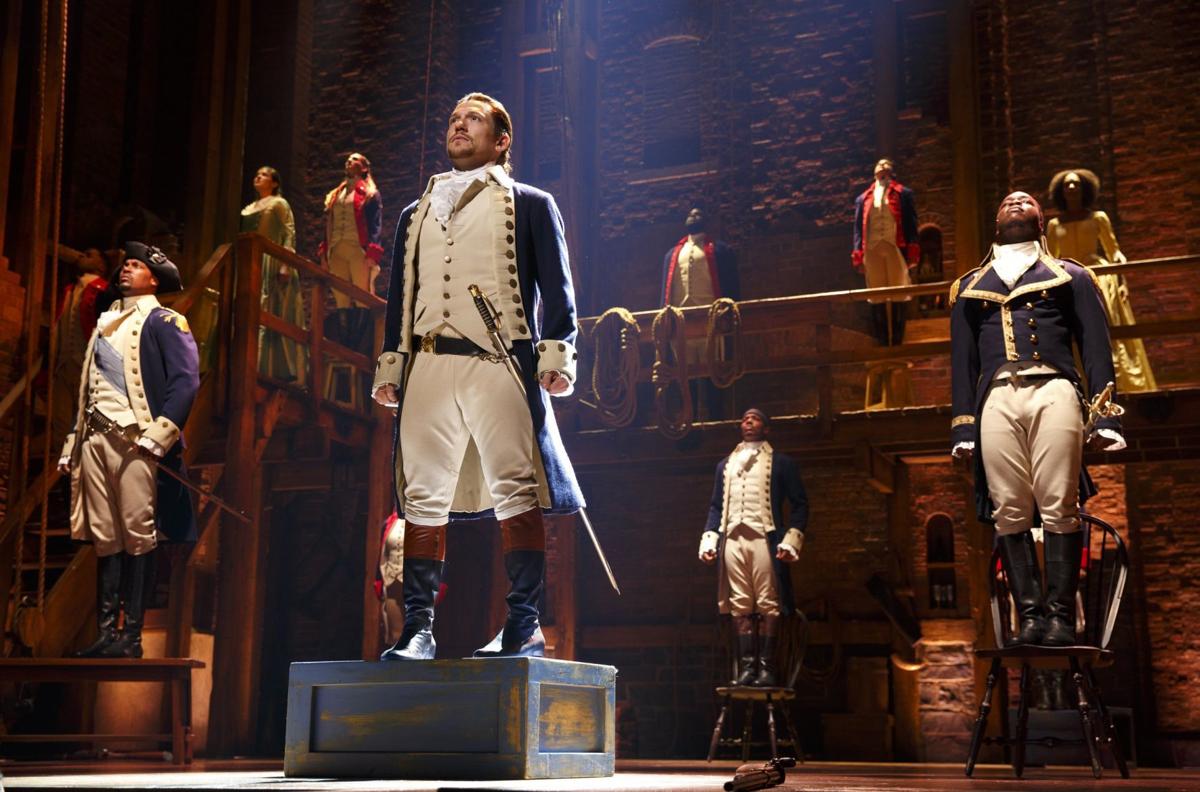 The Chicago cast of "Hamilton," with Miguel Cervantes, center, as "Alexander Hamilton." Photo by Joan Marcus 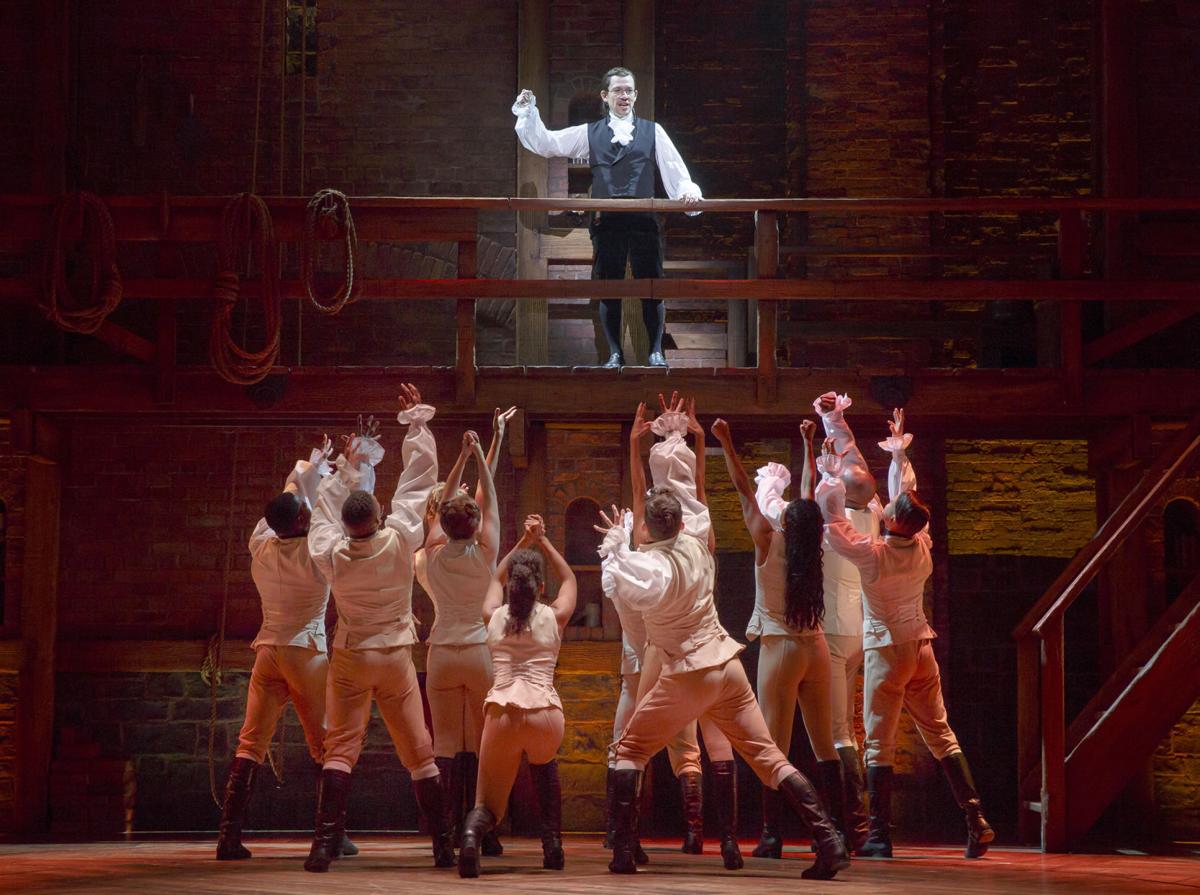 Miguel Cervantes and the Chicago cast of "Hamilton." Photo by Joan Marcus 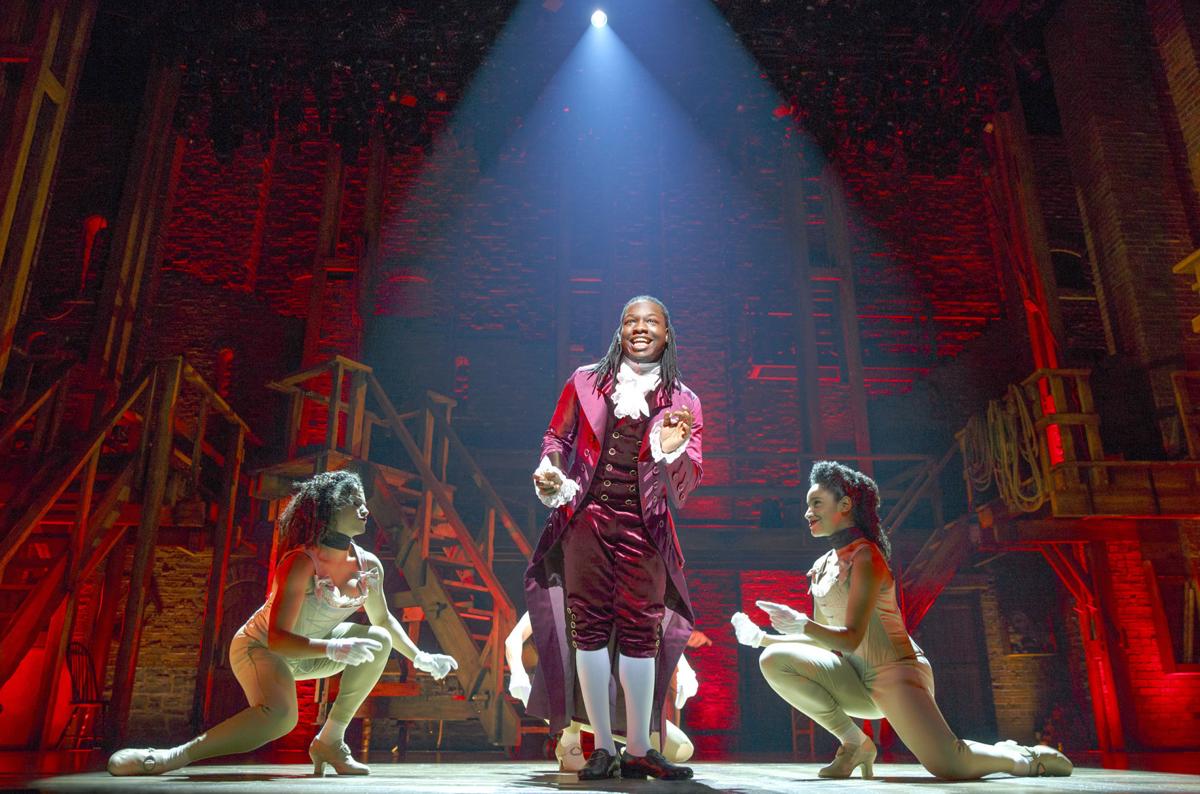 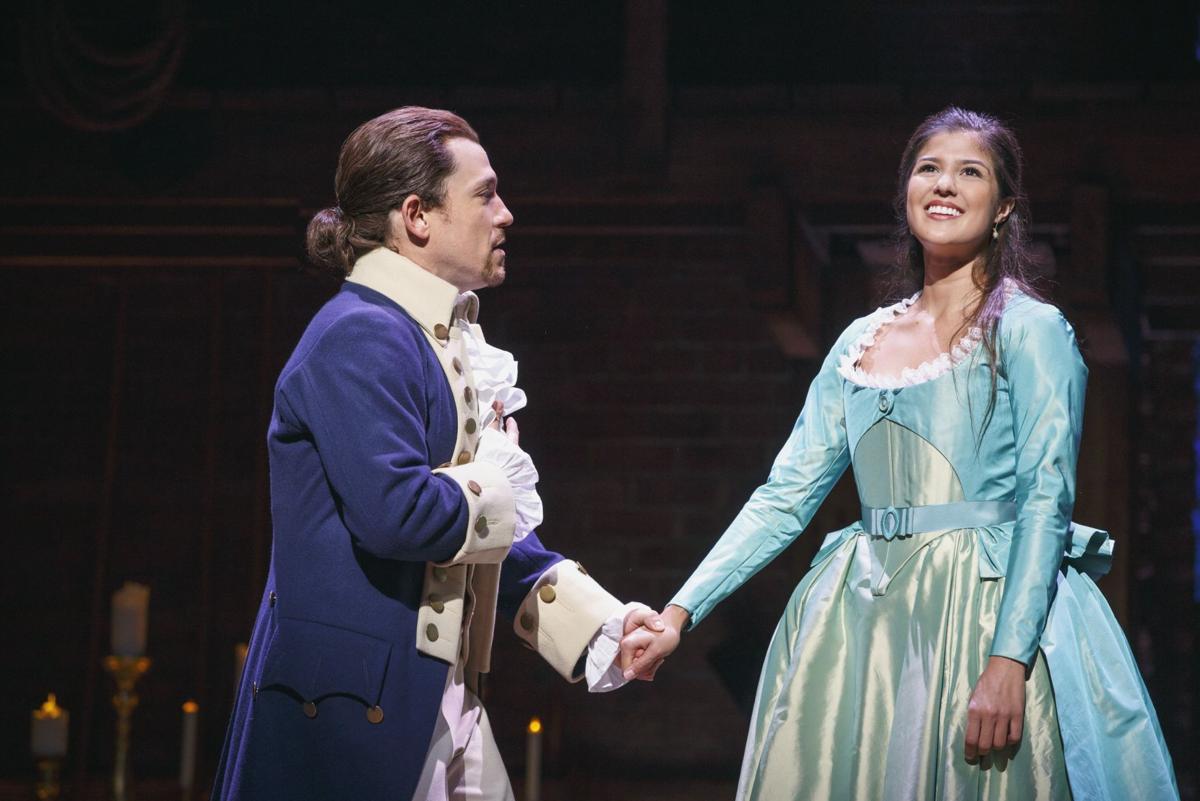