The Kingsbury Ensemble and Friends: A Little Lawn Music

Using funds from two canceled spring concerts, Kingsbury Ensemble director and harpsichordist Maryse Carlin began an informal Friday evening outdoor concert series, giving a little employment to her own ensemble members and other area musicians. Although Kingsbury is an early music group, it’s performing in a variety of styles this summer. This week’s concert is “Romantic Duet,” with Jennifer Gartley on flute and Megan Stout on harp in music of Puccini, Faure, Ibert, Piazzolla and Rota. By Sarah Bryan Miller

Giuseppe Verdi is not usually a composer associated with sublime humor; his first attempt at comedy, “Un giorno di regno (A One-Day Reign),” was a resounding flop. Most of his oeuvre consists of tragedies, with a fair amount of blood-and-thunder (or, as it’s sometimes called in operatic circles, “thud and blunder”) in the mix. And then there’s “Falstaff.” With a libretto by composer Arrigo Boito, from Shakespeare’s “The Merry Wives of Windsor” and “Henry IV,” Parts I and II, it presents a sublime portrait of the fat knight and the hilarious revenge exacted from him and a few other overbearing men by a quartet of intelligent women with a plan, all set to some of Verdi’s finest music. The Met presents a performance from 1992 with a splendid cast that includes Mirella Freni, Barbara Bonney, Marilyn Horne, Bruno Pola and Paul Plishka, conducted by James Levine. By Sarah Bryan Miller

As the Craft Alliance Center of Art + Design prepares to move this fall from the Delmar Loop to new, larger digs at 5080 Delmar Boulevard, it’s clearing some inventory from the shop. Starting Friday, find discounts on all kinds of handcrafted items, including jewelry, ceramics, fiber and more. By Valerie Schremp Hahn

Taste of the Greek Festival

St. Nicholas Greek Orthodox Church’s annual Taste of the Greek Festival has adopted a curbside-pickup model this year due to the coronavirus pandemic. Order online from a selection of individual savory dishes (gyro, spanakopita, pastitsio and more), as well as baklava and other sweets. A gyro platter for four to five people is also available, and you can order Greek beer and red and white wine. By Ian Froeb

Anti-communist crusader Sen. Joseph McCarthy slandered many and ruined careers with his accusations in the 1950s. Author Larry Tye dug into the papers and military records of McCarthy for his new biography, “Demagogue.” He’ll talk about the senator and parallels today with President Donald Trump (in a recent NPR interview, he called them both “bullies” who point fingers when attacked) in a Facebook Live discussion. By Jane Henderson

Night at the Zoo

Want to pay a visit to the animals at the St. Louis Zoo — but sans children? The inaugural Night at the Zoo is just for adults, age 21 and up. Attendance will be limited, and guests will receive two drink tickets, a free animal-themed mask, and discounts at food outlets and gift shops. The zoo will host the event again on Aug. 27 and Sept. 17. Guests must wear masks. By Valerie Schremp Hahn

When 6 p.m. Thursday • Where facebook.com/leftbankbooks.stl • How much $29.99 (book purchase) • More info left-bank.com

Those looking to Marlo Thomas and Phil Donahue for marriage advice may be old enough to have a good idea about “What Makes a Marriage Last,” the title of the happy couple’s new book. But what a chance to listen to the famous talk show host and actress chat with comedian Lily Tomlin and her longtime spouse, director and producer Jane Wagner. For the book, 40 couples opened up about their best advice for enduring marriages. To hear the couples talk, a book purchase is required from Left Bank Books. Then, the day of the event, the store will email an invite to the private Facebook talk. By Jane Henderson

New bike parks in Eureka and St. Charles County promise to ramp up the free fun

The lot, across from the gallery building, was designed by Studio Land Arts and features meandering trails and structures made from reclaimed materials.

Helen Leara (right) and a group of others prepare Greek salads in 2019 for the St. Louis Greek Festival at St. Nicholas Greek Orthodox Church. 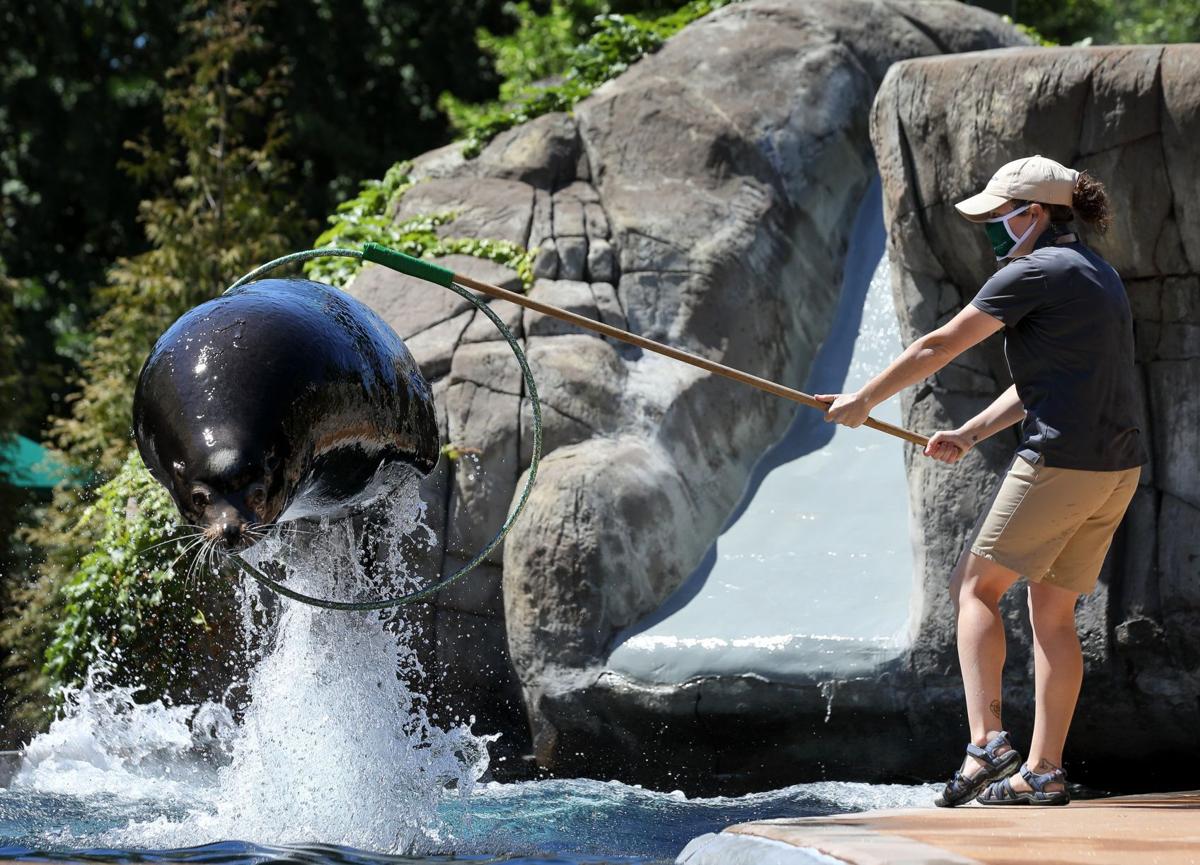 Roby leaps through a hoop held by keeper Katie Stryker during a sea lion show on June 11 at the St. Louis Zoo.