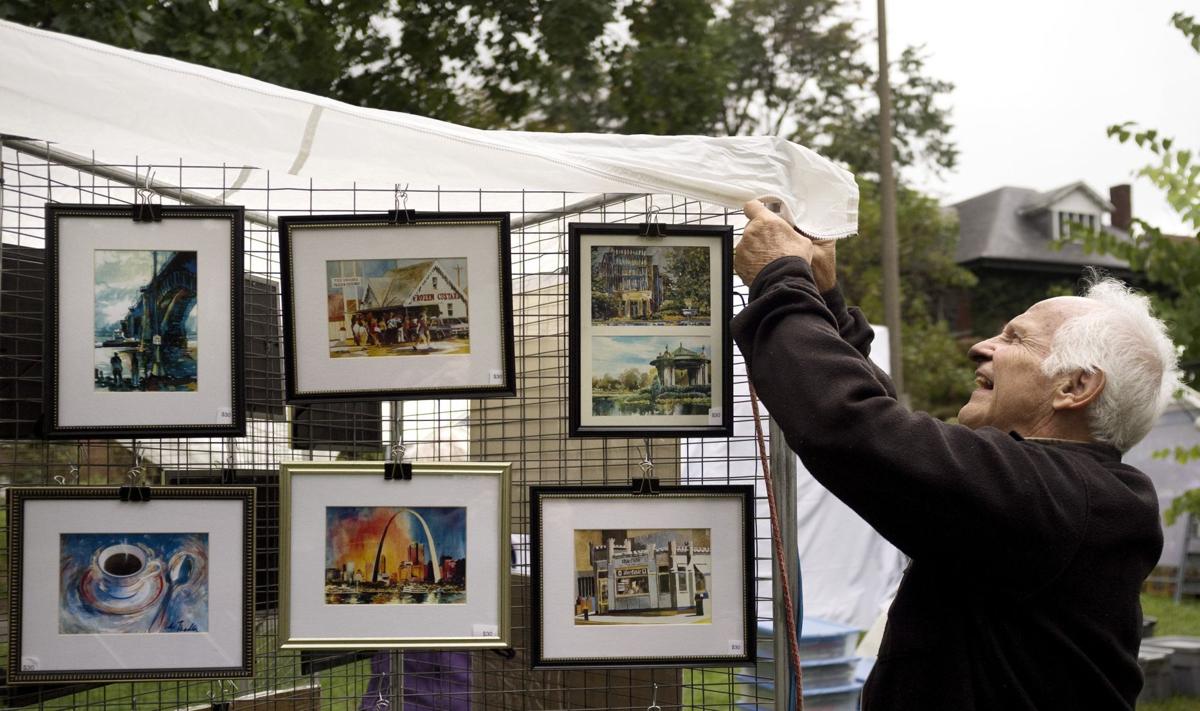 Vic Miller of Webster Groves shields artwork by Marilynne Bradley at the Shaw Art Fair in 2016. The 2020 fair has moved online. 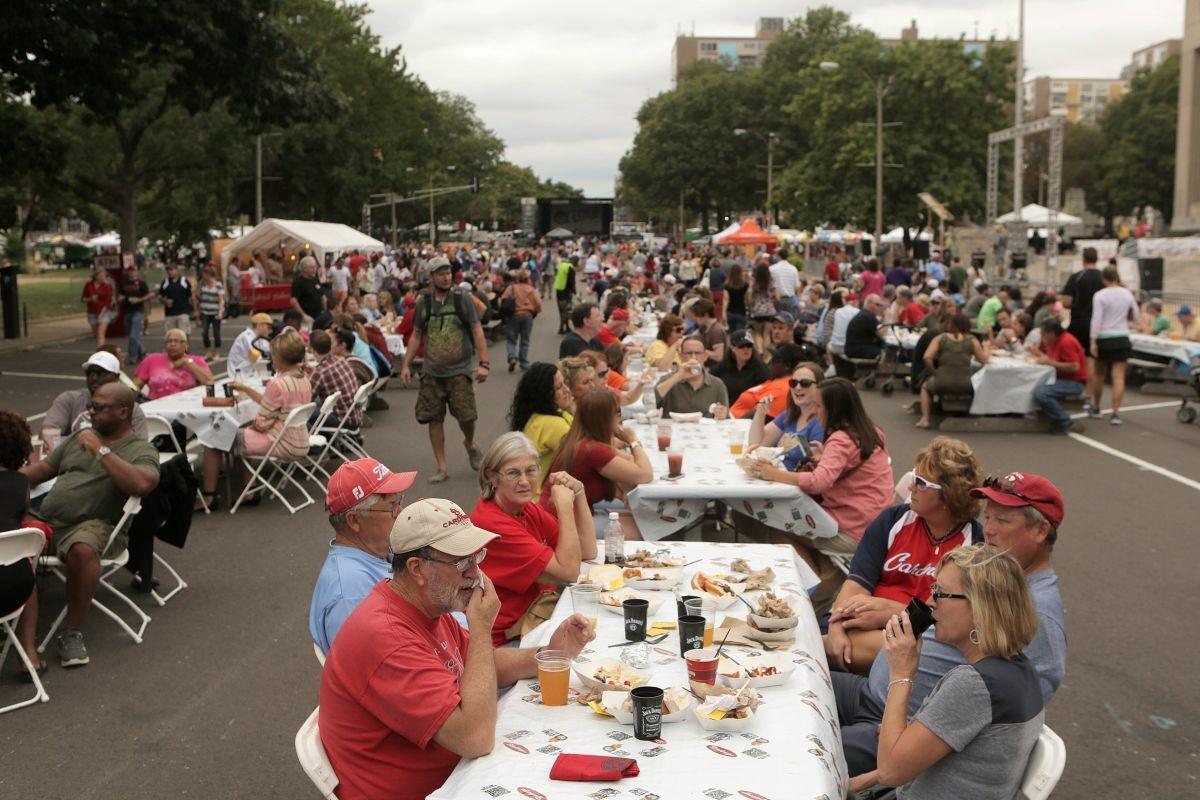 Barbecue lovers take over Chestnut Street for the Q in the Lou in 2015.

Works by young playwrights, performed by professional actors, will be showcased in the WiseWrite Digital Play Festival. Presented by the Repertory Theatre of St. Louis, the virtual production will include three new plays written by schoolchildren: “The Magical Medicine” by Avery Etling, “Bearly Alive!” by Thomas Kessler and “Evie Can Almost Hear You” by Marin Mackey. The plays will be available for viewing throughout the Rep’s 2020-21 season. By Calvin Wilson

When 7 p.m. Oct. 2 • Where facebook.com/leftbankbooks.stl • How much Free • More info left-bank.com

Three generations of Patrick Murphy’s family worked for the local candy company created in a Kerry Patch kitchen, he says in his new book, which he will discuss on Facebook Live. Murphy, a longtime announcer and producer for KETC, writes about the story of Switzer’s Licorice and his family’s role. “One of my fondest memories is getting fresh licorice straight off the drying racks and then eating it on the roof (of the building) and watching workers build the Arch,” Murphy told Post-Dispatch columnist Joe Holleman. By Jane Henderson

Q in the Lou

When Noon Oct. 3 • Where qinthelou.com • How much Free

This year’s edition of Q in the Lou, downtown’s celebration of barbecue, is going virtual. “Our top priority is the health and safety of our patrons,” organizers said in an announcement. “With that in mind, we figured since we can’t all get together in person why not bring the BBQ, beer & bands to you.” The Oct. 3 livestream will feature barbecue and cocktail demonstrations, live music and chats with pitmasters from Pappy’s Smokehouse, Sugarfire Smoke House, Salt + Smoke and Beast Craft BBQ Co. Q in the Lou launched in 2015 with barbecue vendors from St. Louis and other cities. By Ian Froeb

While the actual art fair in St. Louis’ historic Shaw neighborhood was canceled this year, organizers have set up a website where the juried selection of artists will sell their work, which also benefits the Shaw Neighborhood Improvement Association. And for a break from shopping, you can always take a walk through Shaw (be sure to visit the fair venue at the west end of Flora Place) and enjoy the changing leaves. By Valerie Schremp Hahn

The city of St. Charles and Five Acres Animal Shelter are celebrating their new partnership with an inaugural Paw Parade, followed by a vendor fair. The city will be taking intakes and adoptions at the city shelter at 2835 West Randolph Street as well as at the Five Acres facility at 1099 Pralle Lane. Registration is required to walk in the parade, and costumes are encouraged. Face masks are also encouraged, and social distancing measures will be in place. By Valerie Schremp Hahn

When Oct. 3 through Jan. 10 • Where Magic House, 516 South Kirkwood Road, Kirkwood • How much Free with museum admission • More info magichouse.org

Join the Kratt brothers as they activate their creature powers and help visitors explore animal habitats such as a tropical rainforest, the Antarctic, the Australian outback desert and the ones in our own neighborhoods. This exhibit, developed by the Minnesota Children’s Museum with the Kratt Brothers Co., focuses on cultivating STEM skills in children ages 3 to 9. By Valerie Schremp Hahn

Metropolitan Opera: 'The Marriage of Figaro'

A strong candidate for the title of “Best Opera of All Time,” for Mozart’s wonderful score and Lorenzo da Ponte’s humane treatment of the play by Beaumarchais, this 1998 performance of Jonathan Miller’s production has an all-star cast: soprano Renée Fleming as the Countess, Cecilia Bartoli (who controversially substituted another aria for one of the most well-known in the opera) as Susanna, mezzo-soprano Susanne Mentzer as Cherubino, a role she was born to play, baritone Dwayne Croft as Count Almaviva and the great Welsh baritone Bryn Terfel as Figaro. It’s conducted by James Levine. By Sarah Bryan Miller

Remember screaming, jumping or covering your eyes the first time you saw “Friday the 13th”? Though a cruddy film at best, the slasher classic delivered where it counts: the kills. Experience it all again — in theaters — with 40th-anniversary screenings taking place across the country. Attendees will also see a bonus featurette: “Secrets Galore Behind the Gore” featuring makeup and effects guru Tom Savini. “Friday the 13th” was directed by Sean S. Cunningham and inspired many sequels, a reboot, a TV series and a collaboration with another masked killer, Freddy Krueger. By Kevin C. Johnson

The Open Highway Music Festival may have fallen victim to the pandemic, but it’s not totally down. The festival has partnered with the Kranzberg Arts Foundation to present the Blue Sky Brunch Series, featuring Americana and bluegrass musicians. The lineup includes One Way Traffic (Oct. 4), Gerald Erker & Neil Salsich of the Mighty Pines (Oct. 11), John Henry (Oct. 18) and Beth Bombara (Oct. 25). The concerts take place outside the Grandel. In addition to the ticket price, there is a $15 food and beverage minimum per guest; ticket buyers will receive an online form to preorder food and drinks. Guests must follow safety guidelines and practice social distancing. By Kevin C. Johnson

Take in scenic views of the Mississippi River while enjoying live music at the Rock the Dock Concert Series, which runs Sundays through Nov. 1. The schedule includes Jobz 300 (Oct. 4), Soulard Blues Band (Oct. 11), iLLPHONiCS (Oct. 18), Little Dylan (Oct. 25) and Brother Jefferson (Nov. 1). Barbecue will be available, along with beverages by 4 Hands Brewing Co. and 1220 Spirits. Bands will perform from an elevated area next to the dock, and audience members will be seated at reserved, socially distanced tables. Masks are required for guests age 9 and older, and social distancing will be enforced. By Gabe Hartwig

Left Bank Books presents a livestreamed discussion with “Mayor Pete” about his upcoming book, “Trust: America’s Best Chance.” Buttigieg, who ran for the Democratic nomination for president after years as mayor of South Bend, Indiana, writes about the links between social trust and prosperity and the current “crisis of trust” in institutions, others and America itself, the publisher says. The ticket for the discussion includes a copy of the book (on sale Oct. 6), which will be mailed to buyers. By Jane Henderson

Z Brewer: ‘Into the Real’

When 4 p.m. Oct. 7 • Where facebook.com/leftbankbooks.stl • How much Free • More info left-bank.com

The author of “The Chronicles of Vladimir Tod” discusses their new novel for young adults, “Into the Real.” Described by School Library Journal as of interest especially to “teens who are contemplating the constructs of their identity,” the book features three teens fighting for survival. One presents as gender queer, one as female and one as male, according to the book’s description. But are they really three separate people? Local writer Brewer will discuss. By Jane Henderson

The 17-acre, $4.5 million project is called the Anne O’C. Albrecht Nature Playscape. Her family foundation was a lead donor.

Vic Miller of Webster Groves shields artwork by Marilynne Bradley at the Shaw Art Fair in 2016. The 2020 fair has moved online.

Barbecue lovers take over Chestnut Street for the Q in the Lou in 2015.