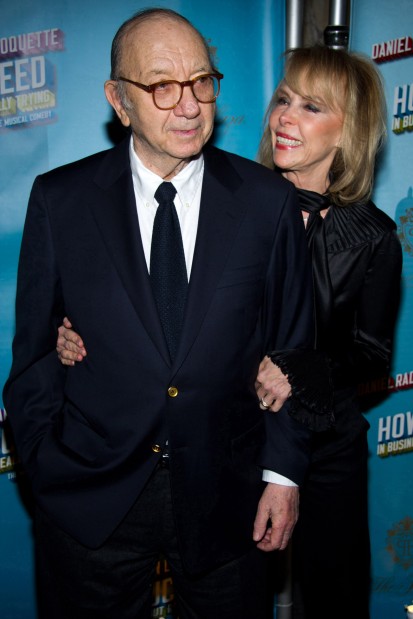 Neil Simon and Elaine Joyce arrive to the opening night after party for "How to Succeed in Business Without Really Trying" in New York, Sunday, March 27, 2011. (AP Photo/Charles Sykes) 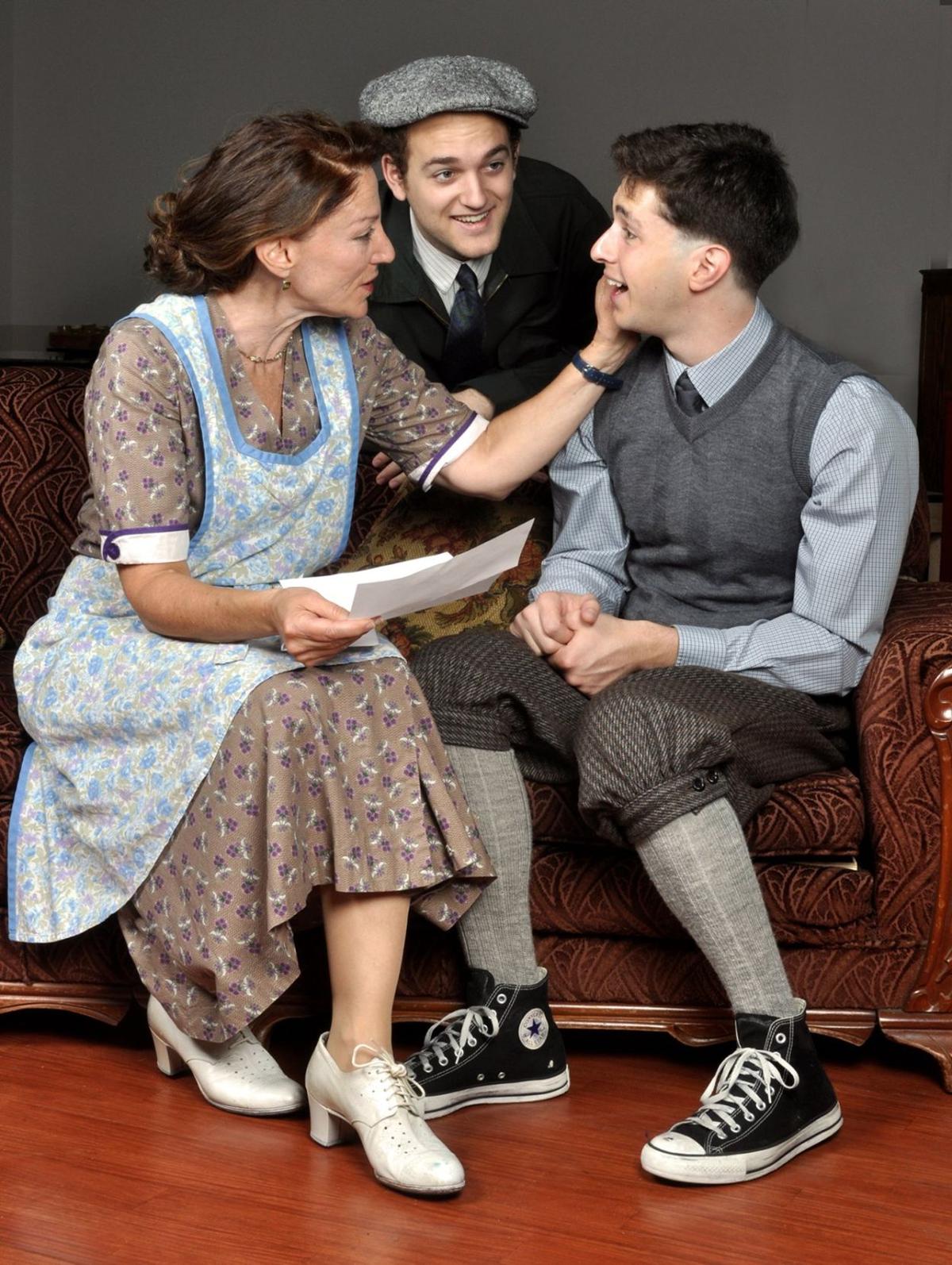 Lori Wilner as Kate, Michael Curran-Dorsano as Stanley and Ryan DeLuca as Eugene, in Neil Simon's "Brighton Beach Memoirs," which plays on The Rep's Mainstage September 5-30, 2012. Photo by Lon Brauer. 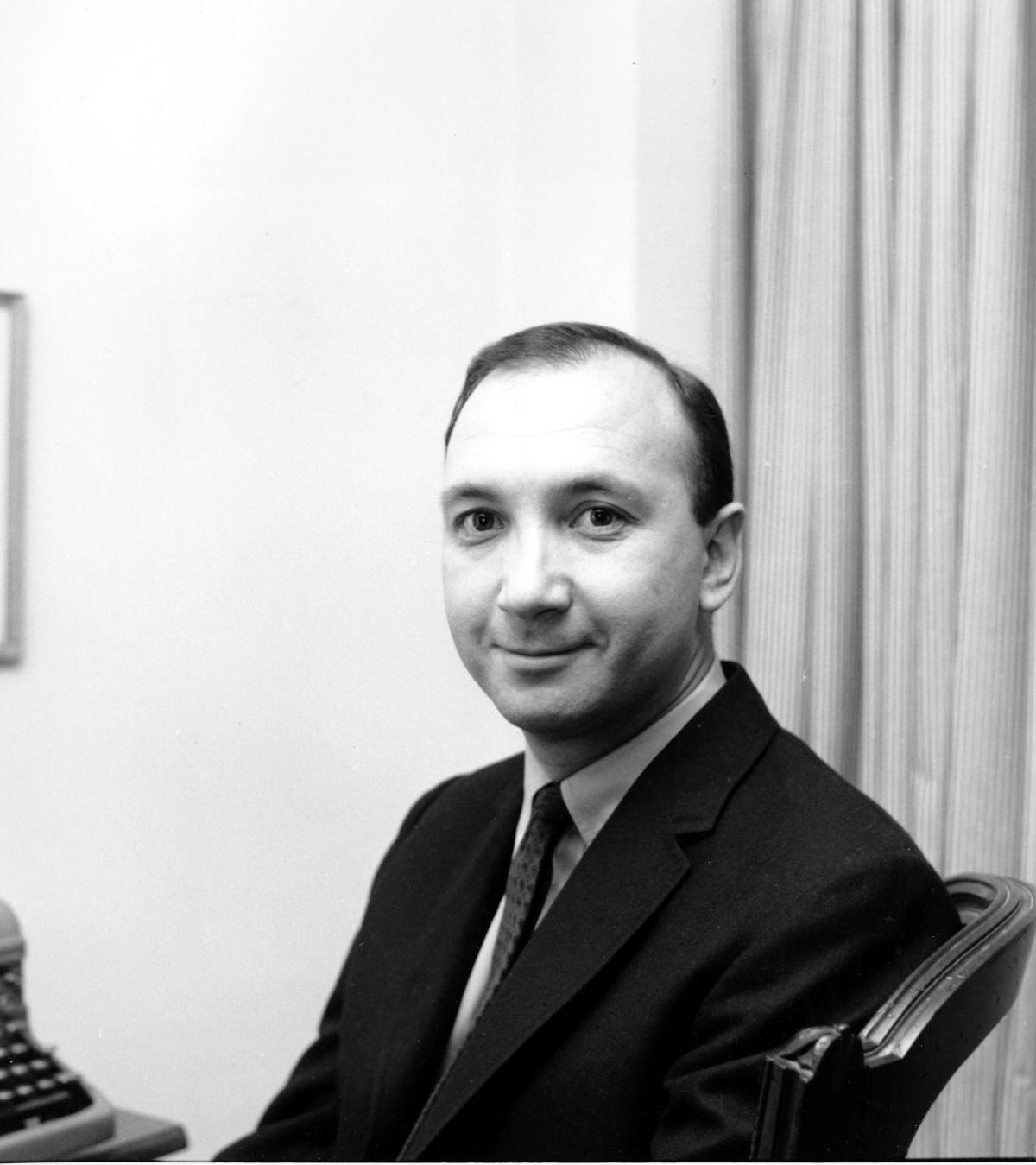 American playwright Neil Simon, 37, is photographed in front of his typewriter in New York City on Dec. 29, 1964. (AP Photo/Dan Grossi) 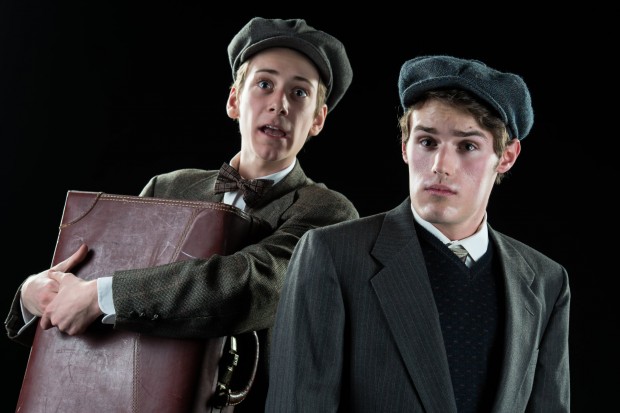 Neil Simon, one of the funniest writers ever to have blessed the American stage, says you can't set out to make people laugh.

“The idea is not to make a play funny,” explains the author of some 30 plays, nearly all comedies. “The audience will do that for you.

The world of Neil Simon has been funny for a long, long time – maybe since he was growing up in the Bronx. That's where he returned in two plays that will be mounted here this season, “Brighton Beach Memoirs” at the Repertory Theatre of St. Louis and “Lost in Yonkers” at the New Jewish Theatre.

Simon, who started writing for radio and TV in the late 1940s, insists that he has put down his pen. (And yes, it was a pen. He never used a typewriter, let alone a word processor.)

“I am 85 now,” he said in a phone conversation from Los Angeles, where he lives with his wife, actress Elaine Joyce. “You can say that I have retired, I have lost interest, I have stopped writing. Nobody I ever met goes on and on until they are dead.

Besides, he points out, writing was very hard work.

“I was never lazy,” he recalled. “I never had a schedule, but I would start about 10 o'clock, have lunch, then go back and write until about 7. And then the next day, I'd rewrite everything.

“I'd rewrite right up until opening night. Once it's onstage, it's over.”

“'This could be better, that could be better' — that's what he does,” agreed Joyce, his fourth wife. (Simon has been married five times, twice to the same woman.) “You'd say, 'How can it be better when it's already great?' I remember doing 'Jake's Women' – talk about rewrites! Just as soon as you learned something, you'd get the rewrites.

“But the thing is, he was never wrong. It WAS better.”

In a sense, Simon — who titled his memoir “Rewrites” — has spent his long career rewriting his own life. “Most of my plays,” he explained, “are sort of about me — but not exactly. You have to draw a line.”

To take one obvious example, “Laughter on the 23rd Floor,” which New Jewish staged two years ago, was an affectionate tribute to his years writing for “Your Show of Shows” with colleagues including Sid Caesar, Woody Allen, Mel Brooks, Carl Reiner “and a number of wonderful writers and actors. I was fortunate to work with those people — and vice versa!”

But the two upcoming shows point inward, with their stories of smart Jewish teenagers growing up in New York. “Brighton Beach” — the first play in Simon's semi-autobiographical “BB” trilogy, which follows its hero into the service in “Biloxi Blues” and to the start of his writing career in “Broadway Bound” — takes place just before World War II.

The war has already begun in “Lost in Yonkers,” the story of two teenage brothers deposited with a grandmother they scarcely know when their widowed father leaves town to find work in a war industry.

More poignant than comedic, “Lost in Yonkers” is the play that brought Simon the Pulitzer Prize in 1991. (It also brought him his third Tony Award, after “The Odd Couple” in 1965 and “Biloxi Blues” in 1985.) He says it's his personal favorite among his plays, too.

Doug Finlayson, who is directing “Yonkers” at New Jewish, says it's not surprising that this is the play that brought its writer a Pulitzer — and, in some quarters, re-evaluation as an important American author. “Comedies never win the Academy Award, right?,” Finlayson said. “And there is a darker quality to this than to some (other Simon) plays. Those boys aren't the only ones who are lost in Yonkers.”

Finlayson sees a strong autobiographical strain in the play. Simon, too, was close to an older brother (the late writer Danny Simon, the man Woody Allen said taught him “everything, unequivocally” about writing comedy). He also had “a pretty tough childhood,” the director said. “His parents fought, and his dad would leave for long stretches of time.”

True, he found enormous career success, almost at once. At 34, he was already a top TV writer when he debuted on Broadway with a hit comedy, “Come Blow Your Horn.” Just five years later, in 1966, Simon had four Broadway hits playing at the same time (“Sweet Charity,” “The Star-Spangled Girl,” “The Odd Couple” and “Barefoot in the Park”). In 1983, he became the only living playwright with a Broadway theater named for him. He's received every honor you can think of, including the 2006 Mark Twain Prize for American Humor.

Steven Woolf, artistic director of the Repertory Theatre of St. Louis, suspects that early success and laughing audiences led critics to dismiss Simon. “People thought his work was formulaic,” said Woolf, who is directing “Brighton Beach.” He says that in many ways it reminds him of Clifford Odets' “Awake and Sing!,” which he directed last year at New Jewish.

Both plays deal with big, Depression-era families crowded into New York apartments. Odets' ground-breaking play is considered a masterpiece. With that in mind, Woolf suggests, “go back and read 'Brighton Beach.' It's a beautiful play.

“Its insights into family, into how people get along, bring a reality to his writing that make him a chronicler of how people live.”

This is very close to what Simon says he strives for himself. Asked what playwrights he admires, he first names Anton Chekhov, the great Russian writer famed for his emotional acuity. Simon paid homage to him in his episodic comedy “The Good Doctor." Then he names one more: the late August Wilson, best known for his “Pittsburgh Cycle,” 10 plays exploring the African-American experience through the 20th century.

“August and I became great friends,” Simon said. “He wrote about people he knew, as I did.

When • Previews Wednesday and Thursday; opening Friday; running through Sept. 30

Rep opens the season with its first Neil Simon show

Actors who play parents shine in a comedy about family life.

The theater's 2012-13 season will open with "Brighton Beach Memoirs."

Fans of good drama should see 'Awake and Sing!'

The play feels like a subway train: fast and crowded, as distinctively part of New York as the Empire State Building.

Neil Simon and Elaine Joyce arrive to the opening night after party for "How to Succeed in Business Without Really Trying" in New York, Sunday, March 27, 2011. (AP Photo/Charles Sykes)

Lori Wilner as Kate, Michael Curran-Dorsano as Stanley and Ryan DeLuca as Eugene, in Neil Simon's "Brighton Beach Memoirs," which plays on The Rep's Mainstage September 5-30, 2012. Photo by Lon Brauer.

American playwright Neil Simon, 37, is photographed in front of his typewriter in New York City on Dec. 29, 1964. (AP Photo/Dan Grossi)