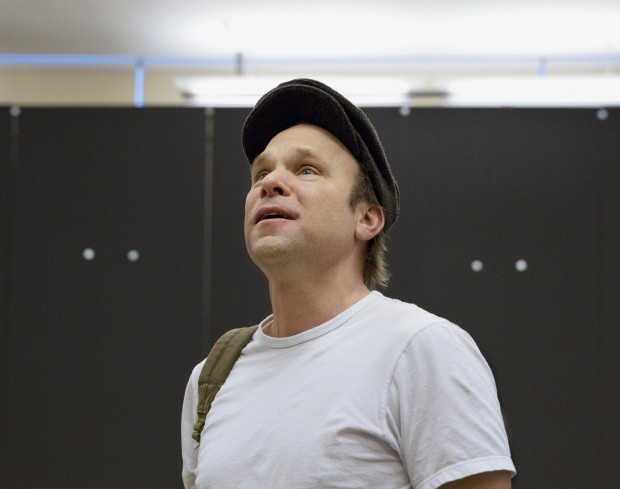 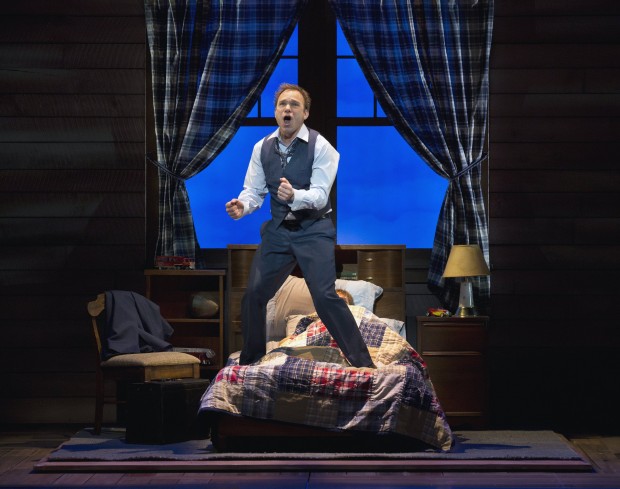 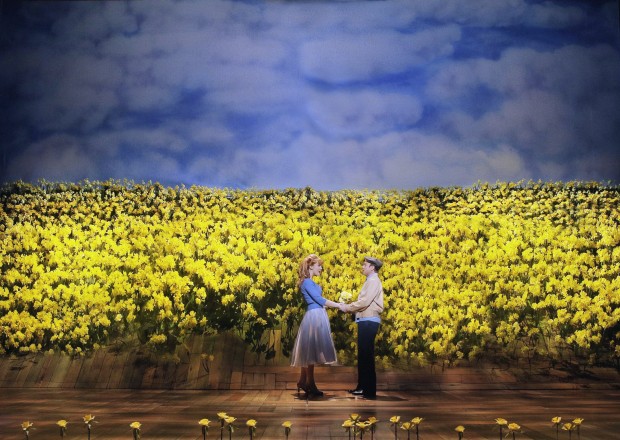 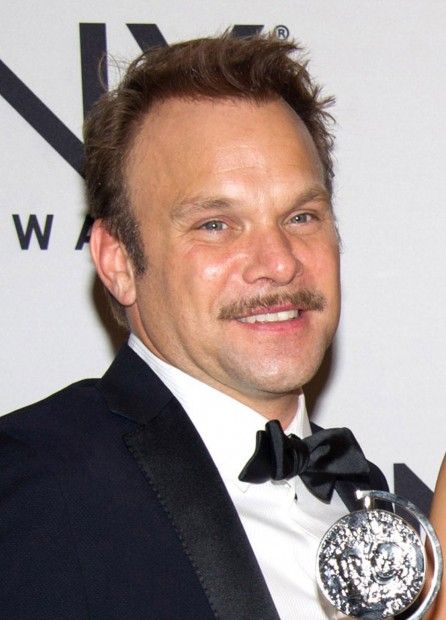 Norbert Leo Butz appears backstage at the 65th Annual Tony Awards in New York in 2011. He won the award for outstanding lead actor in a musical for "Catch Me If You Can." He won the same award in 2005 for "Dirty Rotten Scoundrels." AP Photo/Charles Sykes, file 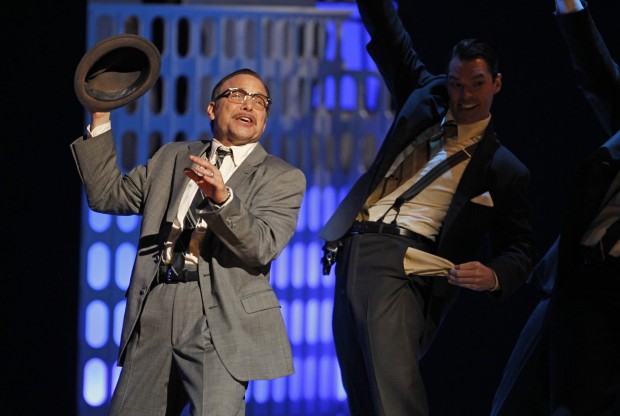 Norbert Leo Butz, left, performs with the cast of "Catch Me If You Can" during the 65th annual Tony Awards in New York, Sunday, June 12, 2011. (AP Photo/Henny Ray Abrams) 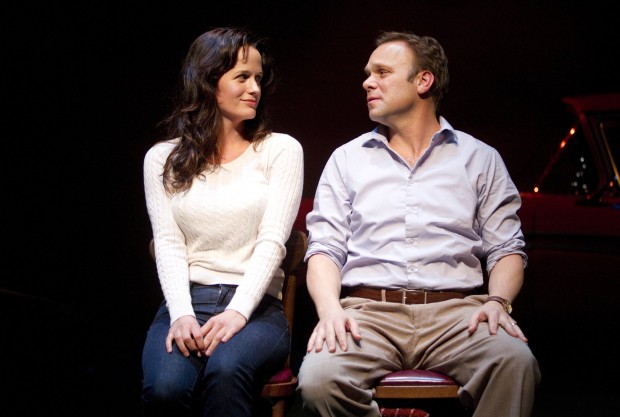 In this theater image released by The Hartman group, Elizabeth Reaser, left, and Norbert Leo Butz are shown during a performance in "How I Learned to Drive." (AP Photo/The Hartman Group, Joan Marcus) 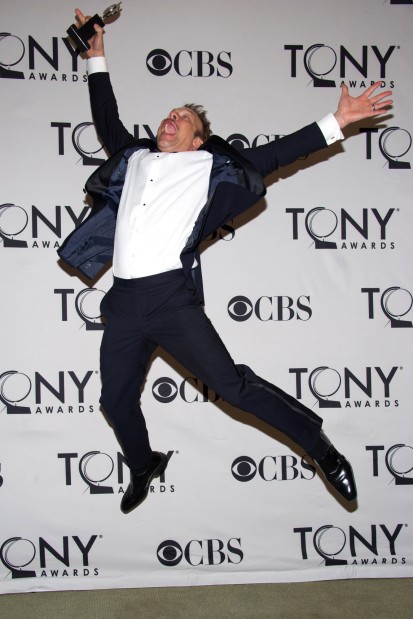 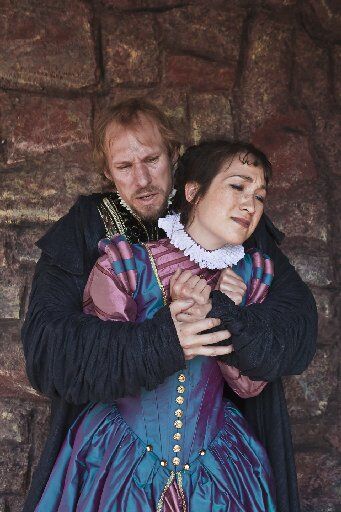 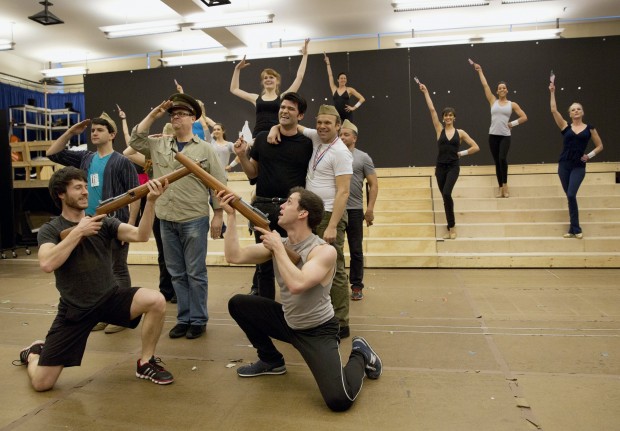 Norbert Leo Butz — winner of two Tony Awards, star of a new Broadway-bound show, the performer who created such modern-musical charmers as Fiyero in “Wicked” and Jamie in “The Last Five Years” — faces a daunting challenge.

He’s the commencement speaker at his alma mater, Webster University.

“I am terrified,” said the actor, in Chicago with the tryout of “Big Fish.” Set to open on Broadway in September, it closes in Chicago on Sunday; after that, he’ll come home to St. Louis to perform benefit concerts for the Angel Band Project, a charity established in memory of his late sister, Teresa.

And in his spare time, there’s that speech to prepare.

“Talk about a tough gig,” Butz said. “I hope somebody will get some inspiration, some positive re-enforcement, from it. This acting thing is not for sissies.

“But when I was in college, you couldn’t have told me that I wouldn’t be a working actor.”

The adjective — working — means more to him than the noun that follows it.

“The only thread through my career is near-constant employment,” he said, not really kidding. Besides the stage, he also appears on TV and in movies, including the new film “Disconnect.”

“That is a huge, rare gift in the theater. I just marvel that people are still asking me to do things. I feel most at home, most myself, when I am working on a show.”

The latest thing is the role of the father in “Big Fish.” Inspired by the movie about a man whose charismatic father told him all kinds of outlandish stories (a movie that was itself inspired by a novel by Daniel Wallace), the story’s inherent theatricality makes it a natural for the musical stage, Butz says.

Two actors, Ewan McGregor and Albert Finney, share the role of the father in the movie. Butz, however, plays the character throughout, from a boy of 16 to a dying man of 70.

“It’s a huge, meaty role, very complex” said Butz, 46. “I play the father in both fantasy and naturalistic sequences. And the show is in great shape. I love working with (director/choreographer) Susan Stroman.

“Stro and I worked together — oh my gosh, years ago — on a show called ‘Thou Shalt Not.’ It was not a big success. But it was my first Tony nomination, and I have wanted to work with her again ever since.”

The two musicals that brought him his Tonys, for his portrayal of a young con man in “Dirty Rotten Scoundrels” and of an FBI agent on the trail of a con man in “Catch Me If You Can,” showcased Butz’s triple-threat talent: He can sing, he can dance, he can act.

He began honing those talents at Bishop DuBourg High School, when he performed not only at his own school but at Catholic girls schools around town. “The acting bug bit me before I graduated,” he said.

“I just fell in love with theater, with a love bordering on the obsessive. I couldn’t get enough.” That led him to the drama conservatory at Webster — a surprising turn for someone from his storybook traditional family.

The seventh of Elaine and Norbert A. Butz’s 11 children, he grew up in what his younger brother, Jim, has described as “a real party family.” Now a Presbyterian minister, Jim Butz starred in “Hamlet” and as Marc Antony in “Julius Caesar” at Shakespeare Festival St. Louis, winning Kevin Kline awards for both performances; Norbert Leo has called Jim “the best actor in the family.”

“The whole family is very musical,” Jim Butz said in 2005, when he was starring at the Repertory Theatre of St. Louis in “Lobby Hero.” The family getaway near Steelville, Mo., featured song-filled hayrides, and “on the holidays (we) would always bring out the guitars. We’d sing Christmas carols and folk songs. We’d break out the board games or sing every night.”

Those happy memories have helped sustain the Butzes since Teresa was raped and murdered in Seattle in 2009 during a home invasion. The family and friends established the Angel Band Project in her memory, raising money to help survivors of sexual violence.

The first concert, on Wednesday at the Sheldon, sold out before it was even publicized. “We have one of the largest families in south St. Louis,” Norbert Leo Butz said. “My immediate family will probably fill half the theater.

“So (giving) the second concert was a no-brainer. I am just going to sing a bunch of songs I love — some that were on the (Angel Band) record we made in 2010, some that were special favorites of my sister. Teresa loved soul and gospel music. We even have a new arrangement of ‘Proud Mary,’ a song she loved to dance to.”

Less than a year ago, the Butz family suffered a second loss when another brother, Tom, died of cancer. “My parents have been through the fire, but they are doing remarkably well,” Norbert Leo said. “It’s been rough on them. But they are people of faith, and that has gotten them through.

“They are wonderful examples to me and my kids of how to live.”

Divorced from his first wife, Butz is married to Michelle Federer, the original Nessarose in “Wicked.” His three daughters — Clara, Maggie and Georgia Tessa — are on his mind as he prepares to speak at the Webster commencement. Like any father, he wonders what the future holds for them.

“If my kids say to me, ‘I am not going to college, I am going to do something else,’ I will fight them tooth and nail. I am a firm believer in higher education. I did complete my BFA, and my MFA (at the University of Alabama’s Shakespeare program) as well.

“But that’s not for everyone. My friend Jerry Mitchell (the Tony-winning director and choreographer who also attended the Webster conservatory) didn’t need a degree. He was ready to take New York by storm, which he just did again with ‘Kinky Boots.’

“So I guess there’s no pat answer. Besides, my oldest is going to be 16 soon, and I find I have less control than I imagined I would. I try to listen to my mother, who always says that she doesn’t take all the credit for her children’s successes or all the blame for their failures. I think that’s a healthy attitude.

“I just think that when you’re young, you ought to read some things. Education is not about the grades you get. It’s not even about what you study. It’s about asking questions, about resisting the urge to take things at face value. That’s what education is for.

“Now watch me end up with three girls who want nothing to do with college.”

‘An Evening with Norbert Leo Butz’

'An Evening with Norbert Leo Butz'

The Angel Band Project will benefit from sales.

'Bring It On' wins Tony nomination

Inclusion of cheerleading musical surprises and delights its producers.

Norbert Leo Butz appears backstage at the 65th Annual Tony Awards in New York in 2011. He won the award for outstanding lead actor in a musical for "Catch Me If You Can." He won the same award in 2005 for "Dirty Rotten Scoundrels." AP Photo/Charles Sykes, file

Norbert Leo Butz, left, performs with the cast of "Catch Me If You Can" during the 65th annual Tony Awards in New York, Sunday, June 12, 2011. (AP Photo/Henny Ray Abrams)

In this theater image released by The Hartman group, Elizabeth Reaser, left, and Norbert Leo Butz are shown during a performance in "How I Learned to Drive." (AP Photo/The Hartman Group, Joan Marcus)