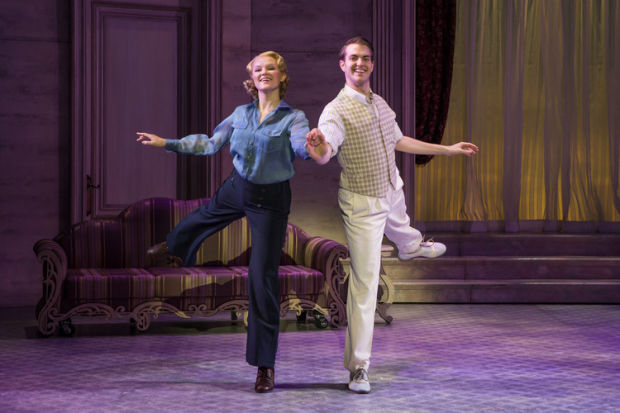 Mariah MacFarlane and Alex Enterline star as a bootlegger and a playboy who find love in "Nice Work If You Can Get It. "Photo by Jeremy Daniel (www.JeremyDanielPhoto.com) 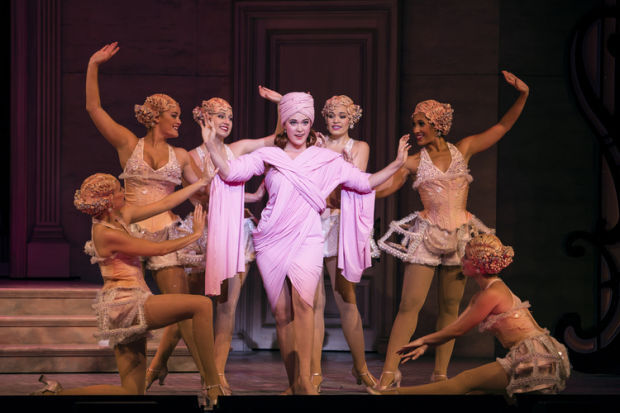 Rachael Scarr (center) plays a famous dancer in "Nice Work If You Can Get It." Photo by Jeremy Daniel (www.JeremyDanielPhoto.com)

Right near the start of “Nice Work If You Can Get It,” the giddy Gershwin musical that opened Friday night, director and choreographer Kathleen Marshall shows her (sleight of) hand.

Our heroine, Billie Bendix (Mariah MacFarlane), is about to sing one of the most treasured songs in the Gershwin brothers' vast treasury, “Someone to Watch Over Me.” It's a tender song, capturing in music (by George) and lyrics (by Ira) a loneliness that only the luckiest among us never have known.

Only problem is, Billie is one tough cookie. She may look like a gamine in her vest and newsboy cap, but she runs a topnotch gang of bootleggers and talks like Jimmy Cagney. How can that song come out of Billie's sharp little mouth?

Marshall has the answer. Just as the first plaintive notes sail into the Peabody Opera House from music director Charles Reuter's small, stylish ensemble, one of Billie's henchmen rushes onstage to give her a rifle. (Careless bootlegger!) As MacFarlane sings the world's best “take care of me” song — and sings it hauntingly — she makes it hilariously clear that this girl can take care of herself.

Comedy undercuts an almost impossible, and perhaps dated, notion of romance — and in the process, invites us to hear a beautiful song as if it were new.

Marshall pulls off the same trick in the next scene, which features a glamorous celebrity, modern dancer Eileen Evergreen (Rachael Scarr), singing her own praises as she bathes. The tub is enormous — and it better be. Marshall has stuffed it with ballerinas, who rise up like dainty pink bubbles to fill the enormous bathroom.

In other words, she manages to create a live-theater twist on a Busby Berkeley movie number. Maybe it was even bigger when “Nice Work” was on Broadway; who knows? But the tour production, stylish and comic on its own terms, makes Marshall's point: The number locates this show in its own, anything-goes era, and shows us how to enjoy it today. It reveals Marshall's brains as well as her style.

Both Billie and Eileen are involved with Jimmy Winter (Alex Enterline), a fabulously wealthy playboy who exists chiefly in the world of old musicals. This one has been through a few versions, starting with scripts that Guy Bolton and P.G. Wodehouse wrote decades ago.

Joe DiPietro fashioned their material into a romantic comedy that makes almost no sense if you think about it — but with music like this, who's thinking?

“Nice Work If You Can Get It” might remind you of “Crazy for You,” which playwright Ken Ludwig freshened up for today's audiences, or “Thoroughly Modern Millie,” which spoofs shows like this one. If you're a longtime Muny fan, you might even remember the old Gershwin shows themselves.

Characters in musicals like these tend to be exaggerated. They aren't “real people,” but they are vivid ones. MacFarlane, Scarr and Enterline give big, bright performances, but they aren't up there by all by themselves. Reed Campbell, who plays Billie's henchman Cookie, heads a comedy crew that bubbles like champagne, and the dancers add more sparkle.

We even get an extra shot of Gershwin. Bits of his other music show up incidentally. For example, when Billie and Jimmy first kiss, we hear the ecstatic swell of his famous rhapsody.

Guess what color the lights turn.

'Nice Work If You Can Get It'

Mariah MacFarlane and Alex Enterline star as a bootlegger and a playboy who find love in "Nice Work If You Can Get It. "Photo by Jeremy Daniel (www.JeremyDanielPhoto.com)

Rachael Scarr (center) plays a famous dancer in "Nice Work If You Can Get It." Photo by Jeremy Daniel (www.JeremyDanielPhoto.com)