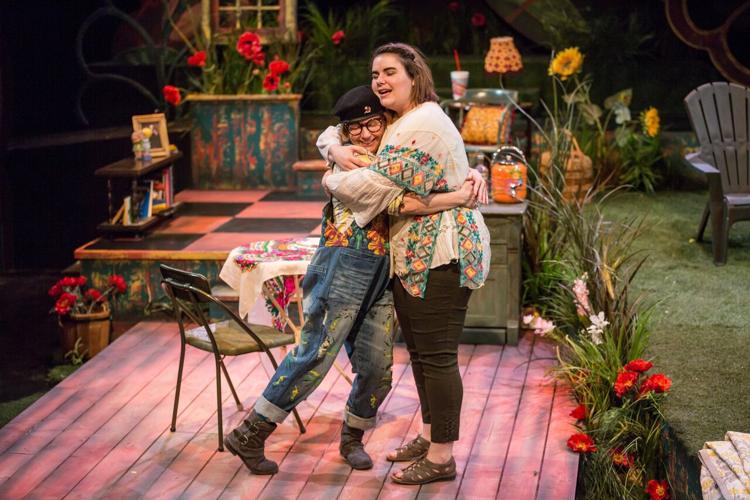 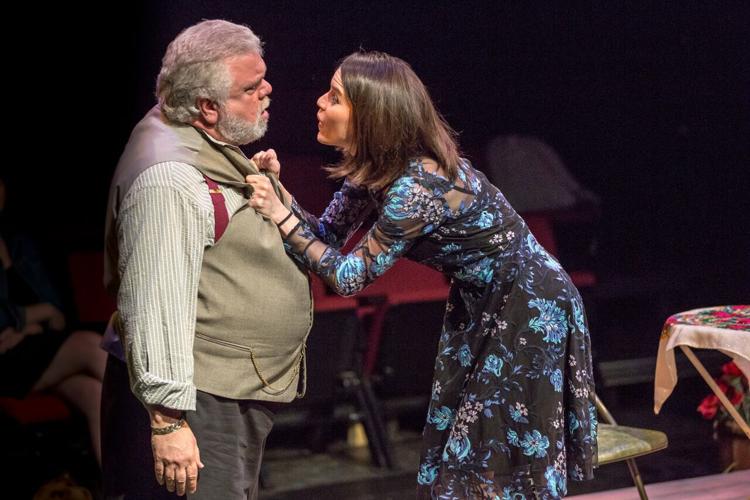 Ella (Julie Layton) pleads with her pompous husband, The Professor (Greg Johnston), to change his ways in "Life Sucks" at the New Jewish Theatre. Photo by Eric Woolsey 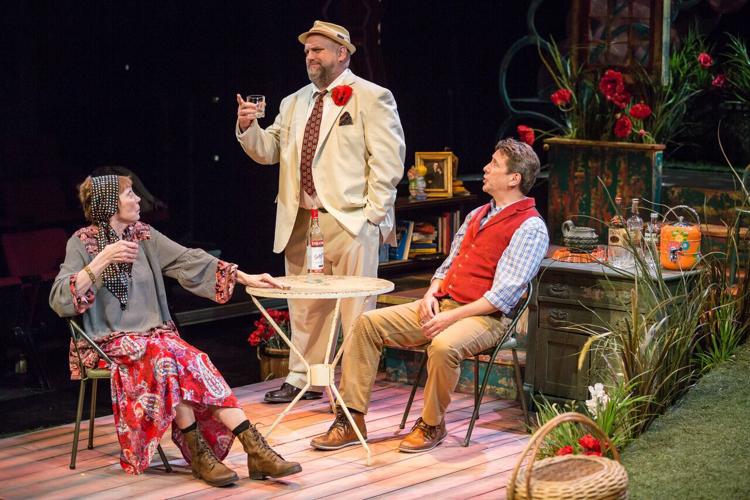 Vanya (Christopher Harris, standing) reveals a few of the many things bothering him to his old friends Babs (Jan Meyer) and Dr. Aster (Jeff Cummings) in "Life Sucks" at the New Jewish Theatre. Photo by Eric Woolsey

Director Edward Coffield gives “Life Sucks,” Aaron Posner’s witty and touching riff on Anton Chekhov’s “Uncle Vanya,” a smart production at the New Jewish Theatre. He treats us to terrific performances all over the fabulously surreal set, designed by Peter and Margery Spack.

Nevertheless, it’s an odd choice to close the company’s season — the last season under founding artistic director Kathleen Sitzer, who is retiring.

For one thing, there are a lot, and I mean a lot, of curse words, mostly starting with the letter “f.” This alone is quite a departure for the troupe.

Furthermore, it’s not a specifically Jewish play. One of the characters is Jewish, something she reveals in a lovely speech about her zayde (grandfather). But that’s pretty much it for Jewish content, which usually inflects NJT shows much more thoroughly. That’s neither good nor bad, but it’s different.

Either one of those characteristics might put off some members of the audience. But those aren’t the big issue. The big issue is that “Life Sucks” seems likely to baffle anybody who isn’t familiar with “Uncle Vanya.”

If you saw Rebel and Misfits’ compelling production here last season, you’re in good shape. If not, you could read the “Uncle Vanya” script, or maybe watch one of the movie versions.

Too much? Then at least read an online synopsis of the Chekhov before you see the Posner. You’ll enjoy yourself a lot more if you do.

Like “Uncle Vanya,” “Life Sucks” takes place at a big house where members of an extended family and their friends drift in and out. They include Sonia (Katy Keating), the generous, lovelorn young woman who owns the house and lives there with her late mother’s brother Vanya (Christopher Harris). Smart, funny and alcoholic, he’s a disappointment to himself and everyone else.

Almost all of them want something or someone they can’t have. Vanya and Dr. Aster have fallen hard for Ella. Sonia is wildly in love with the doctor, an emotion Keating expresses so clearly in her averted glances and strangled voice that she reminds you of how first love can make you feel: It’s as if she’s choking on bubbles. Ella wants a different life. The Professor wants to be young again, the way he pictures himself in his mind.

How we see ourselves — so different from what others see — is one of the big questions Posner addresses. The play asks questions large and small, often quite directly when the actors speak to the audience. This nontraditional approach to storytelling is also unusual at NJT, but it’s easy to get into the spirit because of the actors.

They’re an impressive group. Harris plays Vanya as a kind of kvetchy clown (very different from the romantic depressive that brought Andrew Michael Neiman a St. Louis Theater Circle Award for the Rebel and Misfits production). He’s loud, he’s messy, he seems to have no grasp at all of boundaries — yet he shows us why the others love Vanya.

Hand, Johnston, Layton and Meyer, all familiar to St. Louis audiences, deliver their characters with authority, and Cummings, fairly new to town, proves a welcome addition. As for Keating, she is just sensational in a performance of agonizing authenticity.

After Sitzer retires, Coffield steps in as artistic director. Sitzer brought NJT from so-so productions and predictable viewpoints to a company that, 21 years later, is known for showcasing top talent and for making surprising choices. It seems as if Coffield may have more of them up his sleeve.

Fall for volunteering - join us for a 20-min VVF!

Drew Barrymore would make 'Charlie's Angels 3' 'in a heartbeat'

Ella (Julie Layton) pleads with her pompous husband, The Professor (Greg Johnston), to change his ways in "Life Sucks" at the New Jewish Theatre. Photo by Eric Woolsey

Vanya (Christopher Harris, standing) reveals a few of the many things bothering him to his old friends Babs (Jan Meyer) and Dr. Aster (Jeff Cummings) in "Life Sucks" at the New Jewish Theatre. Photo by Eric Woolsey