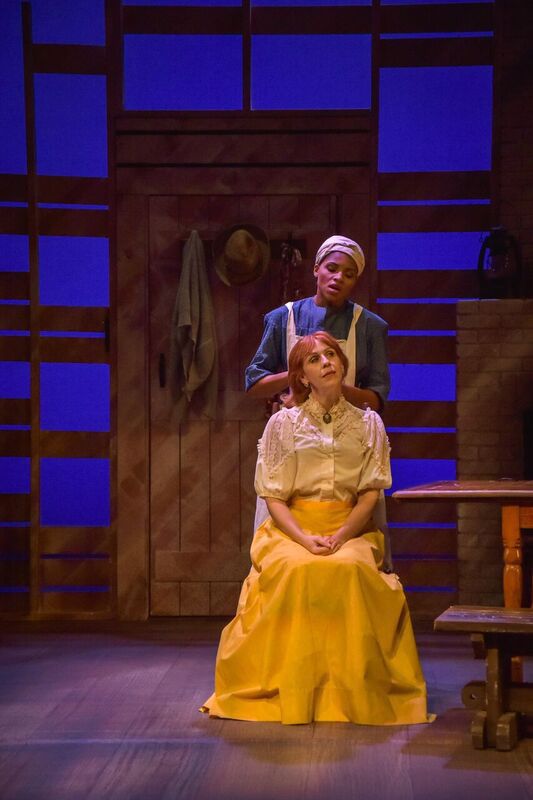 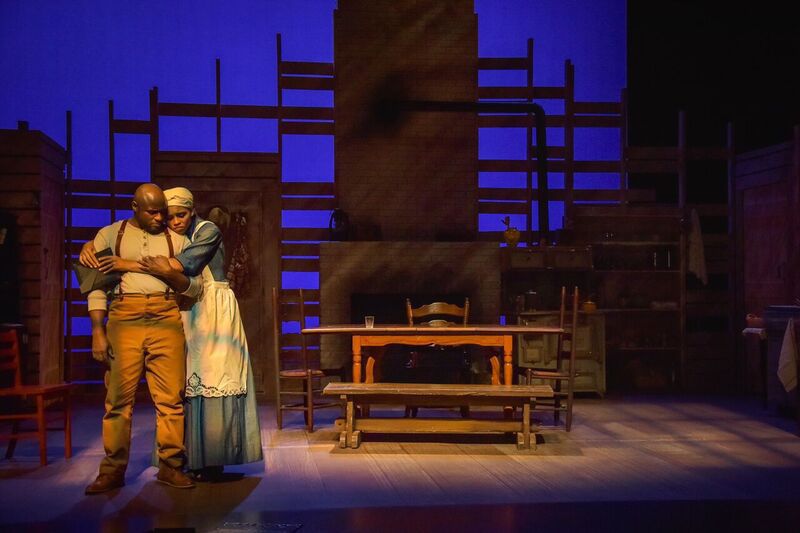 With one room, three people and a lot of complicated history, “Miss Julie, Clarissa and John” plays out as an experiment in combustion.

The three title characters in the play, which opens the Black Rep’s 40th anniversary season, arrive onstage tightly packed with explosives. It doesn’t take much to light the long, slow-burning fuse.

Julie (Laurie McConnell) has returned to the plantation her family has owned for many years, perhaps with an eye toward taking it over herself. A former slave, John (Eric J. Conners), is her butler, and a woman of mixed race named Clarissa (Alicia Reve Like) is her cook.

On the morning of a long midsummer day — a time when traditional rules are relaxed — Julie joins John and Clarissa in the kitchen for breakfast. (It’s a pleasant, homey room, designed by Jim Burwinkle and beautifully lit by Kathy Perkins.) All sugar and cream, Julie urges the servants not to call her “miss.” Haven’t they known each other too long for formalities?

But that doesn’t stop her, two minutes later, from issuing sharp orders to wary, soft-spoken Clarissa, or, eventually, from reminding John that if he doesn’t do exactly what she wants, she can easily “turn things around” on him. She’s Scarlett O’Hara as Potiphar’s wife.

Conners, as John, seems a little too stolid to provoke such nonsense. But who else is around? (Still, would it kill Conners to endow John with a touch of physical grace? The show cries out for it. It would also add excitement if Frye picked up the pace.)

Although they’ve never married, John and Clarissa have been a couple for years. They share deep sympathies with each other, not to mention serious concerns about Julie — as well they should.

Indulging in wild mood swings and changing her tone of voice almost as often as she changes her costume, McConnell strips away Southern Belle conceits to acid-etch a portrait of entitlement. This Julie is cruel, possessive and dangerously self-centered.

Julie even has the nerve to mourn for Odessa, who used to take such good care of her — as if Clarissa were not Odessa’s actual daughter. Clarissa has not only lost her mother, she lost her first love, Georgie Boy, dead or missing on the battlefield.

Also, because of her mixed racial background, Clarissa feels conspicuous. The men and women who work the plantation stare at her, she says; they want to touch her. She even questions John’s feelings for her; is it all based on how she looks? And why does he like her “white” looks so much to begin with?

The most powerful scene in the play, the confrontation between the two women, steams with a tension compounded of Julie’s arrogance and Clarissa’s lifelong self-doubt. With just a slight shift in power — a touch of fear in Julie, a dash of confidence in Clarissa — they lose their balance. The fall plunges them into their intricate, agonizing past.

The past is where Southers runs into trouble. John says that Clarissa was never a slave, implying that she’s much younger than he is. (Does it mean something entirely different from that? If so, why make it ambiguous?) For that matter, how old are Julie and John?

The play is set in 1888, like “Miss Julie.” That’s 23 years after the end of the Civil War. So if Julie remembers Odessa preparing her bath when she was 14 or 15, when slaves worked on the plantation, how old is she now? How old was Clarissa then? Was she even born?

Southers introduces these distracting questions himself, by specifying that 1888 date. It’s actually in the program. If he kept things vague — “Virginia, after the Civil War” — arithmetic wouldn’t be an issue.

Instead, we could concentrate on the trio in the kitchen. But Perkins, the lighting designer, gets it. At the play’s end, she frames Clarissa in a doorway, encompassed in gorgeous light.

Is Perkins quoting one of the most famous images in American movies, the shot of John Wayne in “The Searchers”? It could be. By then, we understand that Clarissa will search for answers for a long, long time.

Biden arrives in Geneva ahead of Putin meeting

Biden arrives in Geneva ahead of Putin meeting