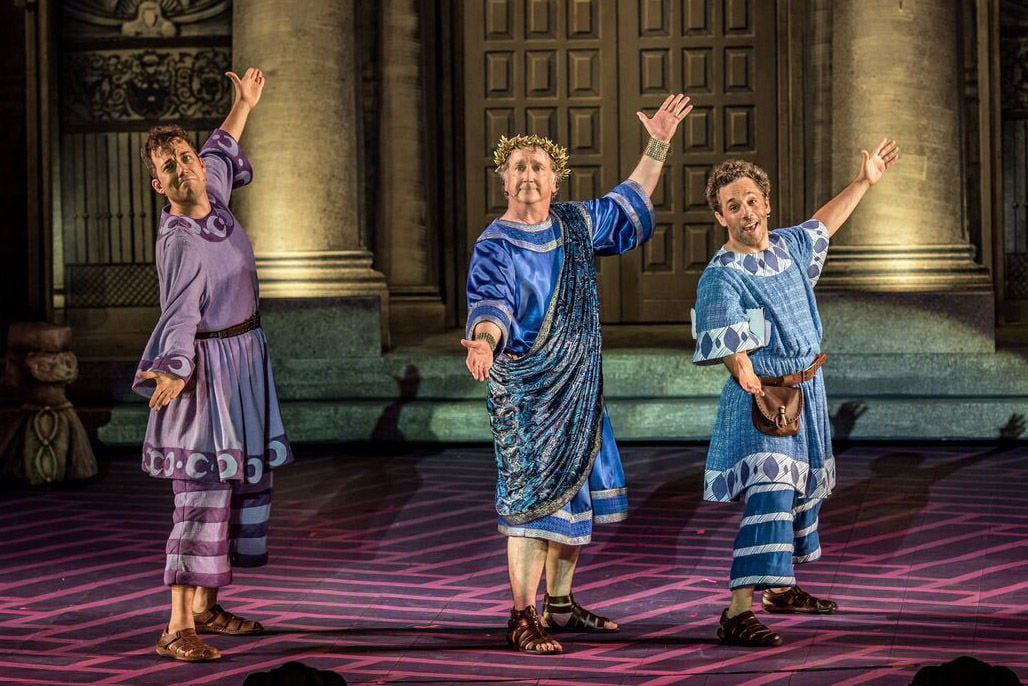 John Tartaglia (left), Mark-Linn Baker (center) and Jeffrey Schecter agree that "Everybody Ought To Have a Maid" in the Muny's 2017  production of "A Funny Thing Happened on the Way to The Forum." Tartaglia will direct "Annie" during the 2018 season. Photo by Phillip Hamer 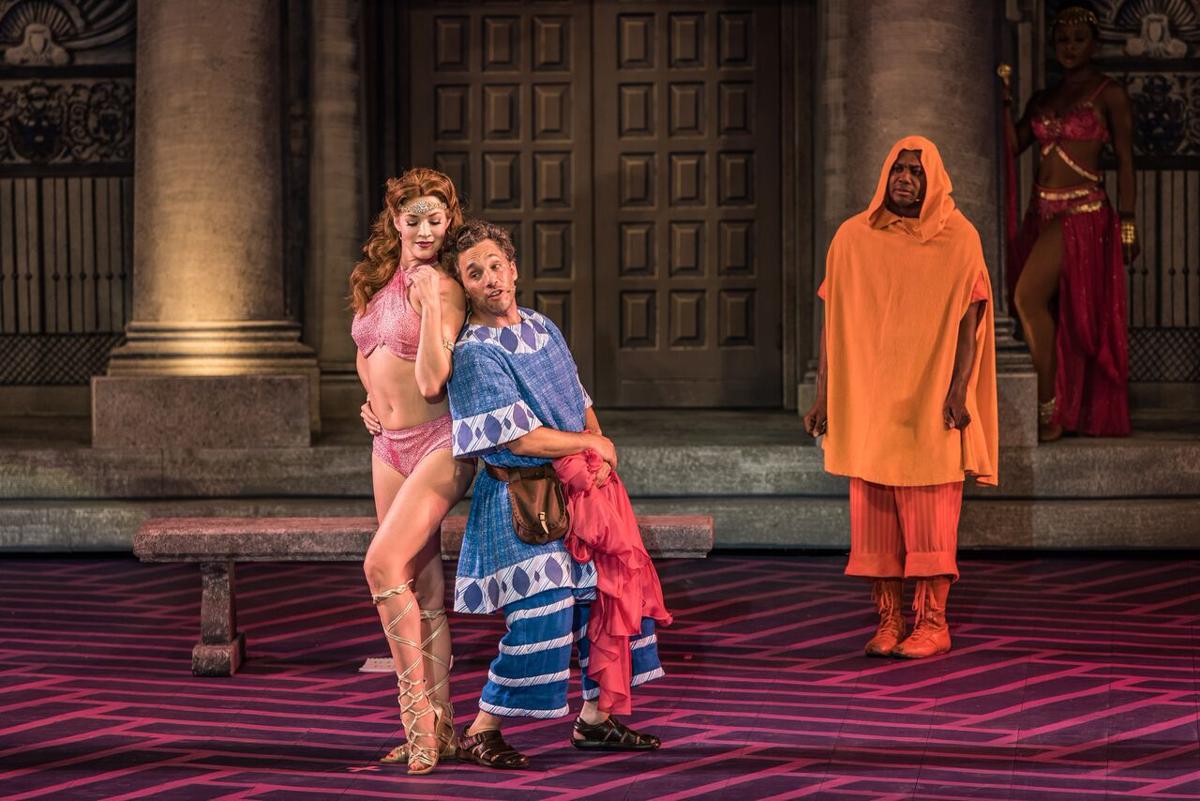 In the Muny production of "A Funny Thing Happened on the Way to the Forum," Pseudolus (Jeffrey Schecter) considers the possibilities of life with a concubine called Panacea (Katelyn Prominski) as another slave (Tommy Scriven) watches. Photo by Phillip Hamer

When “A Funny Thing Happened on the Way to the Forum” opened Wednesday at the Muny, the whole audience was rooting for the leading man, Jeffrey Schecter.

The one with the script in his hands.

Schecter plays Pseudolus, a scheming slave in ancient Rome who longs for freedom and will do anything to obtain it. Until last weekend, that part was to have been played by Peter Scolari. But Scolari, suffering from major allergies and a sinus infection, lost his voice completely on Saturday. A doctor told him it would almost certainly not return in time for “Forum.”

Lead role of Pseudolus has been recast for the show starting Wednesday.

The Muny called Schecter, who played Scuttle the Seagull last week in “The Little Mermaid,” and asked him to step in. Although he was already back in New York with his family, he turned right around.

So, rehearsing hard from Sunday until just before opening, he plunged into the huge role, replete with songs, dances and a lot of stage business. And with the audience applauding him, and with his own winning stage personality, he carried it off with flair.

Of course, he also had a lot of help from the rest of the actors, especially John Tartaglia as Pseudolus’ sidekick, the anxious, hilarious slave Hysterium. Tartaglia’s a riot from his first officious bow to his final attempt to pass himself off as a little girl, dressed in crazy Roman drag.

The puppeteer, actor and director has turned into a Muny star

Director Gary Griffin has directed most of the show in that broad style, which we associate with “Forum.” Loosely inspired by Plautus’ ancient comedies, sleekly written by Burt Shevelove and Larry Gelbart, and full of clever songs with music and lyrics by Stephen Sondheim, “Forum” takes place on a little Roman street with three houses. It’s a very traditional set — no splashy effects, no turntable — smartly designed by Tim Mackabee and lit by Rob Denton.

One house belongs to a sweet, aged Roman (Whit Reichert) who’s spent years searching for his kidnapped son and daughter. One belongs to a procurer (Jason Kravits) who sells beautiful courtesans. And one belongs to the slave-owners, a henpecked citizen (Mark Linn-Baker) and his imperious wife (E. Faye Butler, burdened by a bulbous fake nose but fantastic once she opens her mouth to sing).

The couple’s son, Hero (Marrick Smith), has fallen for a beautiful virgin (Ali Ewoldt) whom he glimpsed next door. Lycus has already sold her to a great Roman warrior (Nathaniel Hackmann). But if Pseudolus can get her away from Lycus before the warrior shows up, Hero will free him.

Talk about offers you can’t refuse.

All these actors do a terrific job, boasting and cringing, lying and flirting, striding and hiding, singing and dancing.

Ewoldt (“Lovely” and the wittily witless “That’ll Show Him”) and Butler (“That Dirty Old Man”) are the vocal standouts, well served by music director Brad Haak and the orchestra. The alluring courtesans and a versatile male trio show off choreographer Alex Sanchez’s facility in two modes: glamour and slapstick. Costume designer Mara Blumenfeld walks the same double line in style.

All of them throw their weight behind Schecter, doing everything they can to help him through this wide-awake version of the actor’s nightmare. (That’s the recurring dream in which you find yourself onstage without benefit of rehearsal. You don’t need to be an actor to dream it.)

But if Schecter suffered, he never let it show. Mike Isaacson, the Muny’s artistic director and executive producer, prepared the audience for the situation with a little speech before “Forum” started. That way, instead of wondering what was going on, theatergoers were insiders, too.

Instead of thinking that Schecter felt uncertain, we appreciated everything he achieved — including, or especially, dancing while holding a script.

How is that even possible? Schecter has loads of breezy comedic charm, and his performance can only get better as he continues night after night.

According to Muny president and CEO Dennis Reagan, the theater never hires understudies. Why would it? This situation almost never comes up. (In a lifetime of Muny-going, this is only the third time I can recall that a lead had to be replaced.)

It’s true that there are several men in the cast who might have stepped into the role of Pseudolus, presumably with the advantage of knowing the show better just because they’ve attended rehearsals. But in that case, two roles would have demanded replacements.

Even more to the point, Griffin seems to have had a new idea about Pseudolus — a character strongly associated with the actor who originated the role on Broadway and screen, the late great Zero Mostel.

Mostel (who also left his indelible mark on Tevye in “Fiddler on the Roof”) was a big clown. But suppose he had not originated the role? Suppose for a moment that Pseudolus originally was played by Joel Grey.

That’s not a big clown, is it? That’s a little trickster, cunning and agile. And that may be exactly what Griffin was going for and what Schecter brings to the Muny stage. He’s already close enough to make it work. With flair.

'A Funny Thing Happened on the Way to the Forum'

In "A Funny Thing Happened on the Way to the Forum," Jeffrey Schecter gives his all.

John Tartaglia (left), Mark-Linn Baker (center) and Jeffrey Schecter agree that "Everybody Ought To Have a Maid" in the Muny's 2017  production of "A Funny Thing Happened on the Way to The Forum." Tartaglia will direct "Annie" during the 2018 season. Photo by Phillip Hamer

In the Muny production of "A Funny Thing Happened on the Way to the Forum," Pseudolus (Jeffrey Schecter) considers the possibilities of life with a concubine called Panacea (Katelyn Prominski) as another slave (Tommy Scriven) watches. Photo by Phillip Hamer