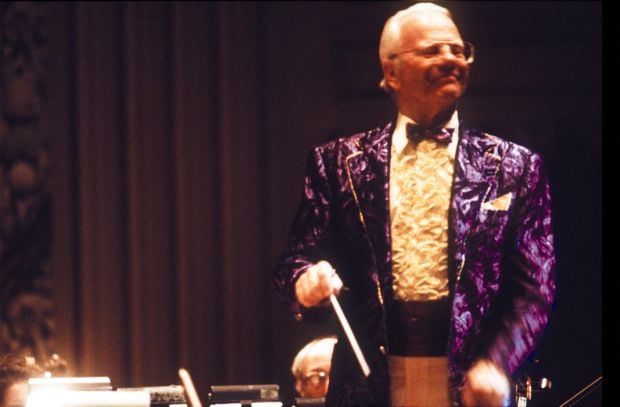 Richard Hayman, principal pops conductor for the St. Louis Symphony Orchestra since 1976 and chief arranger for the Boston Pops for more than 30 years. 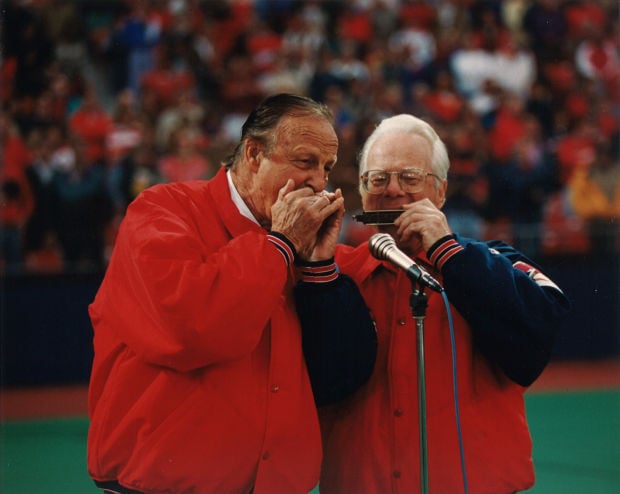 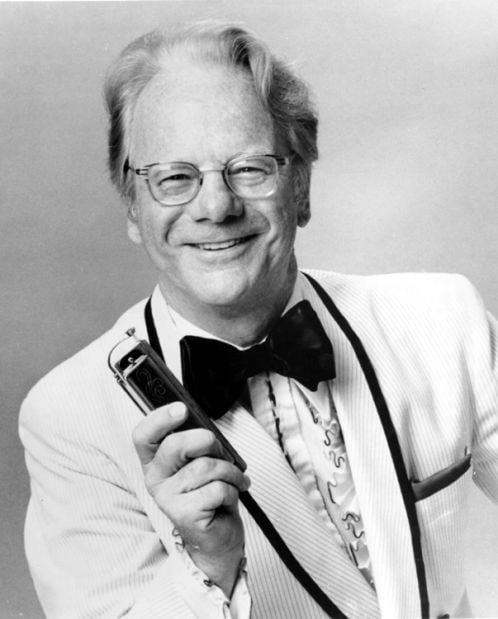 Richard Hayman went from harmonica player to music arranger to pops conductor, all without any formal musical training. Along the way, he arranged the music for Hollywood movies, earned a star on the Hollywood Walk of Fame, did arrangements for the Boston Pops for more than 50 years, and founded and ran the St. Louis Symphony Orchestra’s pops concerts for three decades, while drawing on a seemingly endless collection of sequined jackets.

Mr. Hayman died Wednesday (Feb. 5, 2014) in New York City, of natural causes. He was 93 and had recently entered hospice care.

He was the son of Gladys and Fred Hayman, and a native of Cambridge, Mass. Mr. Hayman started out as a harmonica soloist and music arranger in the 1930s while still in high school. When he graduated at 17, he found a place with Borrah Minevitch and His Harmonica Rascals. The band was “a big name at the time,” he told the Post-Dispatch in 2010, featuring 12 harmonica players and plenty of comedy.

Mr. Hayman went to Hollywood to work at Metro-Goldwyn-Mayer studios in the early 1940s. He made arrangements for such movies as “Meet Me in St. Louis” and “Girl Crazy,” and vehicles for the likes of Betty Grable and Rita Hayworth. Returning to Boston, he wrote for a big band; he met Arthur Fiedler in 1949 and started arranging for the Boston Pops. He was still doing that at the age of 90. “It’s beginning to look like a steady job,” Mr. Hayman said in 2010.

Beginning in the mid-1950s, he served as artists and repertoire chief for Mercury Records, where he worked as the music director for recordings by Patti Page and Vic Damone, among others, and made albums of his own. His 1953 rendition of “Ruby,” the theme song from the movie “Ruby Gentry” arranged for harmonica solo, became an international hit, along with the single’s flip side, “Dansero.”

Mr. Hayman did some guest conducting for Fiedler, who recommended him for the pops conductor job at the Detroit Symphony Orchestra. His success there led to the call from the SLSO in 1976. He founded and led the pops concerts, first in Illinois and then at the Greensfelder Center in St. Louis County’s Queeny Park, where Cardinals great Stan Musial was sometimes a duet partner on harmonica.

Known for sequined jackets and corny jokes, he ran the concerts until their demise in 2002, and returned thereafter for guest appearances. “Liberace told me, ‘Richard, if you dress fancy, you don’t have to play as hard,’ ” he said in the 2010 interview.

He arranged music for Bob Hope, Johnny Cash and Olivia Newton-John. Along with his work in St. Louis and Boston, Mr. Hayman was principal pops conductor with the Grand Rapids Symphony Orchestra and the Florida Sunshine Pops. He retired at the age of 92.

His daughter Suzy Hayman DeYoung said that Mr. Hayman “was very spirited, lively, energetic. He would pull me out of school whenever he had someplace interesting to conduct. He always knew that life was a little more interesting than academia. He was a creative genius, but he knew how to put it aside and play.”

In his 70s, he took up golfing. It became a passion, DeYoung said. He last hit the golf course in the fall of 2013, with his teenage grandsons.

“He was a colorful guy, a fun personality,” said SLSO president-CEO Fred Bronstein. “People came for the music, but they also came for Richard. He was a very skilled guy, a good musician and a very smart arranger.”

Retired SLSO principal trumpet Susan Slaughter praised Mr. Hayman’s chops as an arranger, as well as his kindness. “When he first came, I was a very young musician and didn’t really know the pops style; he helped teach me that. He was very generous with recognition. He was a fun-loving person; the clothes were all part of his act. The audience loved him, and he loved the audience. We called it a concert, but it really was a show.”

In addition to his daughter, of Newtown, Conn., Mr. Hayman is survived by his wife of 53 years, Maryellen Hayman; another daughter, Olivia Hayman Kidney, of West Palm Beach, Fla.; and four grandchildren. Services will be private.

The temporary exhibit will go in the former Emerson Children's Zoo space.

Richard Hayman, principal pops conductor for the St. Louis Symphony Orchestra since 1976 and chief arranger for the Boston Pops for more than 30 years.