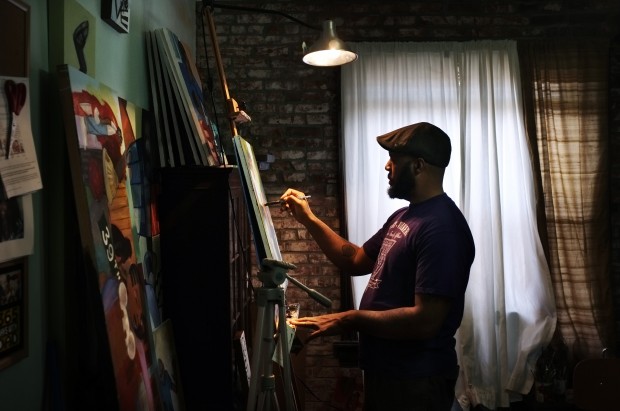 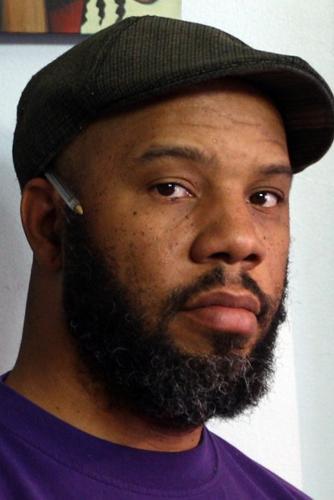 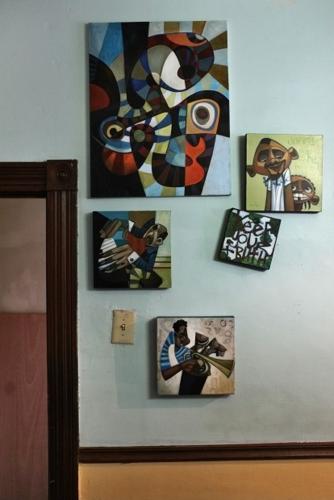 Some work of Cbabi Bayoc, painter and co-owner of bakery Sweet Art, hangs in his studio on Tuesday, March 6, 2012, at his home in St. Louis. Photo by Erik M. Lunsford, elunsford@post-dispatch.com 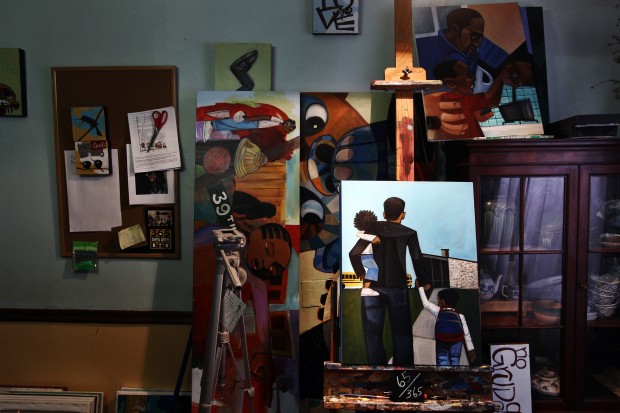 The studio of Cbabi Bayoc, painter and co-owner of bakery Sweet Art, as he paints on Tuesday, March 6, 2012, at his home in St. Louis. Photo by Erik M. Lunsford, elunsford@post-dispatch.com 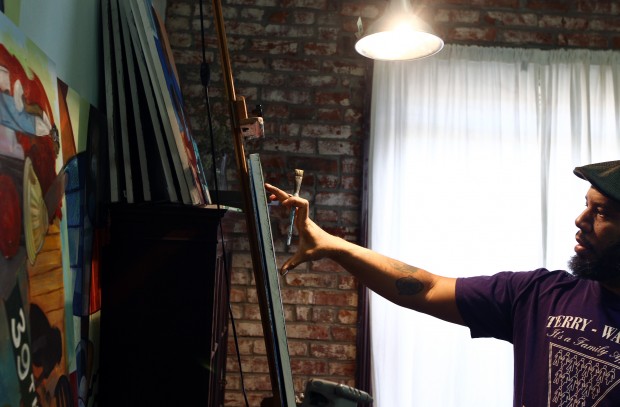 Like many of the kids he meets, painter Cbabi Bayoc never learned about black artists growing up. Musicians, comics, actors? Sure. But visual artists? No way.

"Part of it is the economics," Bayoc said. "We always want our kids to make a living, not be a 'starving artist' on the street. I understand that. I wanted to be a truck driver."

Instead, Bayoc has made a name for himself painting about his two favorite subjects: African-American music and family life. And this month, Aisle 1 Gallery is hosting a solo show that explores another one of Bayoc's passions: birds. Some of the paintings feature birds nesting in branches that spell out uplifting messages. Those are Bayoc's "Birds & Words." Other works boast birds with human characteristics.

"To me, they look like little kids," Bayoc said. "For some reason, I just enjoy painting them."

Birds are all the rage today. So much so that hipster sketch comedy show "Portlandia" mocked the trend in its debut episode ("In Portland, you can put a bird on something and just call it art") and has created the website putabirdonit.com that superimposes a bird on any Web page. Bayoc admits he's stumped by their appeal.

"I don't know why that is," he said. "I know we have the tweeting and the 'Angry Birds' and all of these bird-centered businesses."

Bayoc's popularity is easier to understand. Since Jan. 1, Bayoc has produced a painting a day about fatherhood for his "365 Days With Dad" project. Fans love Bayoc's depictions of the small moments fathers and children share: reading a bedtime story, taking a nap.

Bayoc's real genius, however, has been his use of Facebook and social media to find new buyers, many of whom have never bought art before. Bayoc has presold paintings through May. The paintings cost $215. He also will make 100, $20 prints of each work. Bayoc already has raised $9,000 through a Kickstarter campaign to help cover printing costs. He also plans to print posters to give to schoolchildren.

"The idea behind it was to test the social media market and see if I could post something every night and sell it," Bayoc said. "As a full-time artist, I need to always think about ways to sell art."

Bayoc has sold much of his prior work to white collectors although his work is predominantly about African-American life. This project, however, has generated considerable interest among black buyers.

"I've sold a lot of my work at art fairs, and who goes to art fairs? Typically white buyers," Bayoc said. "Putting my art in a new context has been a great way to broaden my audience."

Bayoc said many black families don't have original art in their homes or encourage their kids to pursue art. That's why he frequently offers workshops at schools.

"There are so many kids who have a talent but are not encouraged," he said. "When I go to school, kids are like, 'You did this?' And I'm like, 'Yeah, and so can you.' But it typically hasn't been seen as a real way to make a living. So we don't have art in school or take our kids to museums. We'll have stuff you can get at Target in the house, but actual art doesn't really exist. You can go into most homes, and you are not going to see any art at all."

Born Clifford Miskell, Bayoc changed his name to Cbabi in 1997. Cbabi (pronounced Kuh-bob-bi) stands for "creative black artist battling ignorance." He and his wife, Reine, came up with Bayoc, which stands for "blessed African youth of creativity." Reine Bayoc is owner of vegan bakery Sweet Art, home to killer Jamaican veggie patties and red velvet cupcakes. Bayoc gained 35 pounds after they opened the shop in 2008.

Bayoc was born in New Jersey and grew up in O'Fallon, Ill. His father killed himself in 1984 after suffering from manic depression. Bayoc didn't know at the time.

"My mom was trying to protect us," Bayoc said.

Bayoc wasn't a bad student, but he didn't bother taking the SAT or ACT exams. He ended up at Belleville Area College, now Southwestern Illinois College, and decided to study art for no other reason than he liked drawing cartoons.

"I took that (drawing) test with the pirate and turtle that you see on TV, but I don't think I even sent it back," he said. "But in college, I was inspired by the students who were going home to learn how to draw skin folds. I was the kind of student who, if you tell me to read pages one through 30, I'm stopping at 30. I realized I needed to get more serious."

Bayoc then attended Grambling State University in Louisiana and, at 26, got a job as a caricaturist at Six Flags St. Louis.

"That was my biggest influence," he said. "I wasn't that good. I would work on these pieces, and the people wouldn't buy them. Everybody would line up for the other guy. But I would go home every night and practice."

Bayoc eventually got commercial work for Coca-Cola and Anheuser-Busch. But he wanted to strike out as an independent artist. Today, his studio is the dining room of his Shaw neighborhood home.

"It's only been since the '50s and '60s we've been able to paint a black face and sell it," he said. "So I feel it is an obligation to paint about these experiences."

That's made for some awkward exchanges when white fathers have asked Bayoc to paint family portraits. Collector Dave Drebes, however, knew Bayoc didn't have to use white paint to capture his own experience as a father. He was among the first to write Bayoc requesting a painting.

Bayoc wrote back: "You understand the mission of the project? Blk children, blk dads? Tryin to show blk kids 365 examples of a loving father. I know u get it, just have to make sure."

Drebes, who developed a friendship with Bayoc after years of buying his work responded, "Oh I get it now. So I'm not black enough?! Lol."

The painting features a sleepy African-American dad and an even sleepier child strumming ukuleles on the couch. Drebes loves it.

"I understand his message but, to me, he just really talented," Drebes said. "It's the sort of work I will pass down to my kids one day."

Just days after historic rains, forecasters say some parts of the St. Louis region may see up to 5 more inches of rain on Wednesday afternoon and evening.

St. Louis suffers second round of record-setting rain. These charts tell the story.

Last night’s 4.32 inches of rain is already nearly an inch higher than St. Louis typically records for all of August (3.38).

The Washington Avenue loft building has been the source of controversy for unruly parties and a fatal shooting earlier this year.

Cahokia Heights to get $21 million to fix broken sewer system, but some fear lack of oversight

Nicole Nelson, an attorney with Equity Legal Services, said she fears the millions will go to waste because of mismanagement.

Flood risk is rising across the St. Louis region. Who will solve the problem?

Experts warn that the St. Louis area must adjust to worsening flash flood risks, fueled by both climate change and flaws in urban development.

August greets St. Louis with more punishing heat and another threat of storms

St. Louis faces a heat advisory from Monday through Wednesday, with conditions expected to feel like highs of 105 degrees each afternoon.

Where to go to get help after St. Louis-area flooding

These centers provide experts in a host of post-disaster fields, such as housing, insurance, food stamp replacement, mental health counseling and other areas.

The St. Louis Zoo is using fitness trackers to help save endangered cattle

Some work of Cbabi Bayoc, painter and co-owner of bakery Sweet Art, hangs in his studio on Tuesday, March 6, 2012, at his home in St. Louis. Photo by Erik M. Lunsford, elunsford@post-dispatch.com

The studio of Cbabi Bayoc, painter and co-owner of bakery Sweet Art, as he paints on Tuesday, March 6, 2012, at his home in St. Louis. Photo by Erik M. Lunsford, elunsford@post-dispatch.com