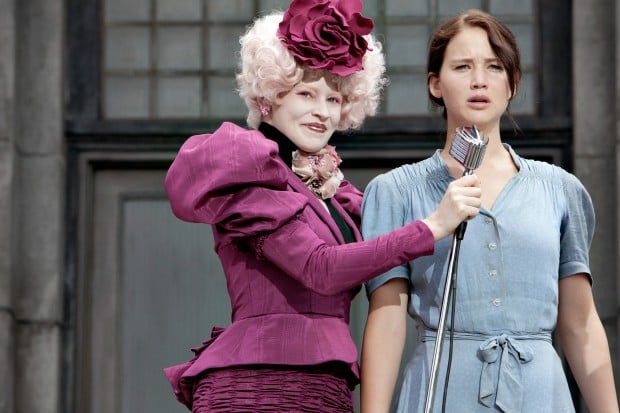 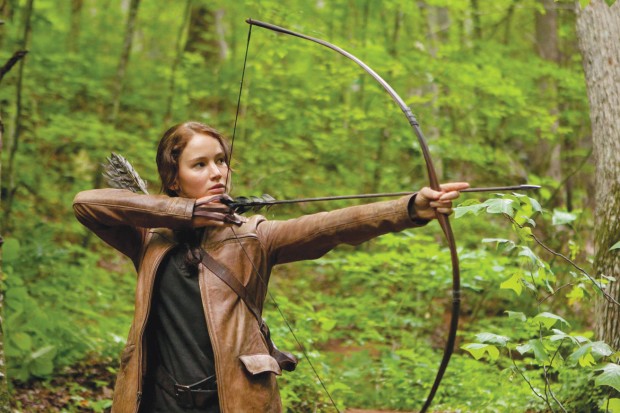 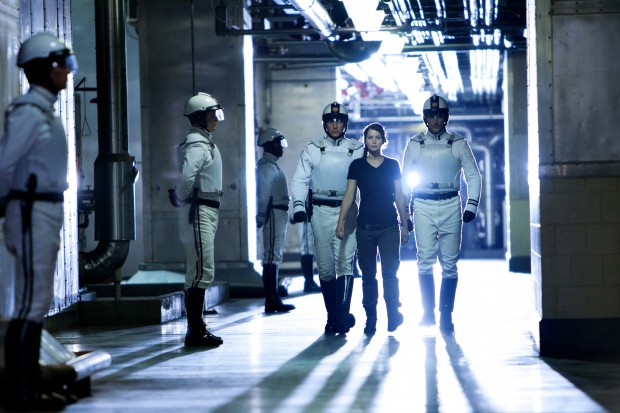 In this image released by Lionsgate, Jennifer Lawrence portrays Katniss Everdeen in a scene from "The Hunger Games." (AP Photo/Lionsgate, Murray Close)

First came wizards. Then vampires. Now, young readers are obsessed with real kids; if only they weren't also menaced by them.

As the latest blockbuster book series hits movie theaters this week, "The Hunger Games" highlights both a new reading craze — dystopian literature — and the surprising fact that Harry Potter wasn't a fluke.

In addition, it comes with its own dilemmas for parents. How old should kids be before they read a novel or see a movie about children killing other children?

For at least one parent and book expert, "The Hunger Games" is for ages 12 and up.

"I think 8 is way too young to be seeing or reading 'The Hunger Games,'" said Melissa Posten, a book buyer for the Classroom Library Co. in St. Louis. "Just because they've had some exposure to violence, such as with video games, doesn't mean the new movie won't give them nightmares.

"It's about real kids killing real kids. It's not Percy Jackson trying to kill Medusa," she said, referring to a popular fantasy story and movie about Greek myths.

Dystopian literature, which involves a future under strict societal control, has been around for years. But until Suzanne Collins published "The Hunger Games" in 2008, it wasn't always a genre kids craved, Posten said. "Same with Stephenie Meyer (author of the 'Twilight' series) and paranormal romance and 'Harry Potter' with magic. These are books that have begun movements, in a way."

High school students might be assigned "1984," "Brave New World" or "Fahrenheit 451," but millions of kids around the world weren't passionately staying up at night reading dystopian novels and recommending them to friends.

Collins' trilogy, which includes "Catching Fire" and "Mockingjay," has more than 26 million books in print in the United States. It has been sold to dozens of countries, according to publisher Scholastic.

The three books are the top three sellers at Amazon.com, and "Games" is the online company's biggest e-book seller ever.

The movie version of "The Hunger Games" is rated PG-13 for some violence and disturbing images.

The trilogy is set in a country that was once the United States. A totalitarian government suppresses dissent by requiring its 12 districts to offer young "tributes," who compete in a televised, gladiator-type event in which the children fight each other until only one survives. Tough heroine Katniss Everdeen's skill with archery helps keep her alive, just as it helped feed her family. A subplot involves a love triangle, but "The Hunger Games" is not a romance like "Twilight."

Like J.K. Rowling's Potter series involving wizards and witches and Meyer's Twilight series with vampires and werewolves, Collins' suspenseful stories are marketed to young adults but read by people of all ages.

Doug Jameson, an English teacher at Hazelwood West High School, said his students pestered him to read "The Hunger Games."

"I love hearing kids talk about a new book."

She is planning a party today with Nerf bows and arrows at the Spencer Road branch of the St. Charles City-County Library.

"It's a pretty violent story, but as a rule, librarians don't tell kids what to read," said Melson, 30.

If a fourth-grader asked her about the books, she'd tell him it was meant for teens, but she said it's up to parents to decide whether to restrict a child's reading.

Melson said that in the past decade, reviews of young adult literature in School Library Journal have more than doubled.

"It's a sign that 'Harry Potter' worked to get younger kids into reading," she said.

Collins' "Mockingjay" does show how ugly war can be, but the books' popularity is more because of an intriguing plot and interesting characters.

Posten agrees, noting, "Being a teenager sucks. To read these books with these deep, dark themes, it makes you feel better that you got a 'B' on your test, but mostly it's escapism.

"There are politically savvy teens, but I don't think that's why they are reading these books."

Author Lauren Oliver, who writes the dystopian "Delirium" series, says one reason people of all ages read these fast-paced novels is because of the modern plethora of "long, plotless literary books."

Oliver, who talked last month before she came to St. Louis to promote "Pandemonium," also says teen literature appeals to adults because now the 'search for self extends into the 30s, 40s, 50s."

As with other popular genres, the success of "The Hunger Games" helped fuel interest in similar books, such as "The Maze Runner" by James Dashner, "Matched" by Ally Condie and "Divergent" by Veronica Roth.

Elizabeth Craft, who grew up in Kansas City and has written for such TV series as "Dollhouse," is a fan and sometimes author of young-adult fiction. With writing partner Sarah Fain, also from Kansas City, Craft is adapting the novel "The Selection" by Kiera Cass, due out April 24, as a potential series for the CW network.

In the book, young women living rigidly controlled lives in a world divided by castes and torn by violence get a chance to compete for the hand of a prince, changing their families' fortunes in the process.

The bleak settings of dystopian books strike a chord in teens because their own emotions are so raw, Craft said. "The stories speak to a better part of ourselves, suggesting that with courage and bravery, you can be who you want to be."

Melson said she worries that the publishing industry will soon saturate the market with dystopian literature.

In the meantime, she said, "It's been a breath of fresh air from the vampire craze."

1. At what age do kids in Panem become eligible for the reaping?
Wrong.Right. Age 12. The final year of eligibility is age 18.

2. What is a tessera worth?
Wrong.Right. Grain and oil. In exchange for tesserae, a family must enter a child’s name more times in the reaping.

3. How many tributes compete in the Hunger Games?
Wrong.Right. 24. A boy and girl are selected from each district.

4. Where does Katniss first introduce herself to Gale?
Wrong.Right. The woods. Gale teaches her to set snares.

5. The mockingjay, the bird on Katniss’ pin, is a hybrid of a mockingbird and what other bird?
Wrong.Right. Jabberjay. In the book, Katniss’ friend Madge gives her the pin.

6. During her private session with the Gamemakers, Katniss shoots an arrow at what?
Wrong.Right. The apple. Katniss is angry when the Gamemakers pay more attention to the dead pig than to her.

8. Who is the boy tribute from Rue’s district?
Wrong.Right. Thresh. He’s the strong, silent type.

9. What does Haymitch tell Katniss and Peeta to find when the games begin?
Wrong.Right. Water. He also tells them to run.

10. When the gong rings at the beginning of the games, what does Katniss retrieve?
Wrong.Right. The backpack contains a sleeping bag, food, iodine, matches, a coil of water, sunglasses and an empty bottle.

11. What is Katniss’ first gift from a sponsor during the games?
Wrong.Right. Medicine. She receives ointment to treat burns.

12. How did Peeta help Katniss when she was 11 years old?
Wrong.Right. He gave her bread. His mother beat him for burning it.

A minutely detailed castle now forms the climax of "The Making of Harry Potter," a behind-the-scenes studio tour based at the Warner Bros.' facility where the films were made between 2000 and 2010.

Second installment of franchise is scheduled for November 2013.

Mother instills love of reading in her children, preschoolers across region

Who's who in 'The Hunger Games'

A guide to the characters in the book and movie.

Prepare a feast of Going to Battle Lamb Stew and Prim's Goat Cheese and Herb Bread before heading out to see the movie.

The highly anticipated film version of "The Hunger Games" opens Friday. Test your knowledge of tributes, jabberjays, Panem and more from Suzan…

Amazon says St. Louis is No. 7 among cities buying "The Hunger Games" books. Apparently it's also the top Kindle title of all time (however lo…

Chart: 'The Hunger Games' and its film predecessors

The film is dressed as a dark satire of soulless entertainment, lacking a distinctive identity.

Joe Williams: 'The Hunger Games' takes over for 'Twilight'

Any pie left at the 'American Reunion'?

In this image released by Lionsgate, Jennifer Lawrence portrays Katniss Everdeen in a scene from "The Hunger Games." (AP Photo/Lionsgate, Murray Close)