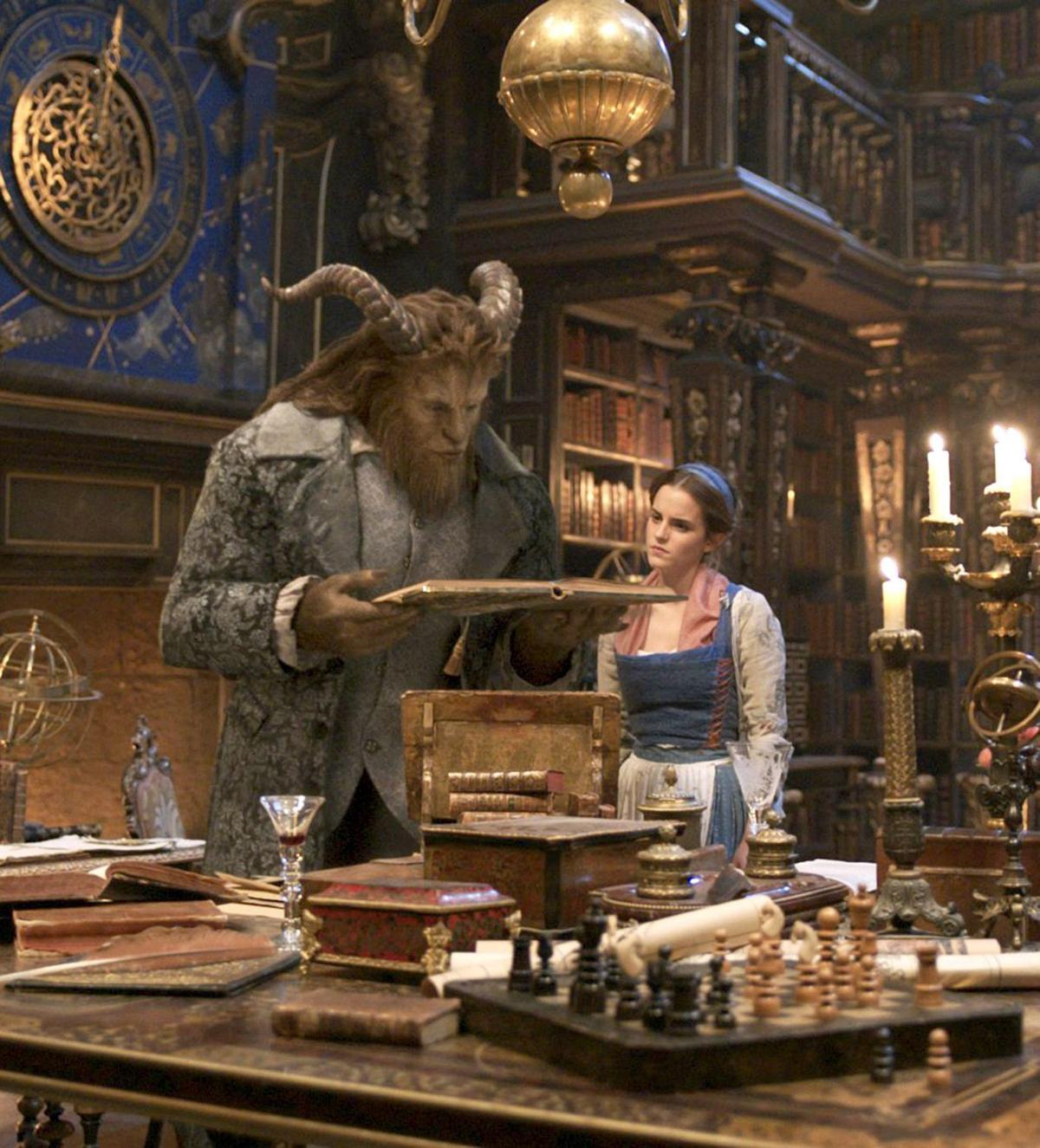 This image released by Disney shows Dan Stevens as The Beast, left, and Emma Watson as Belle in a live-action adaptation of the animated classic "Beauty and the Beast." (Disney via AP) 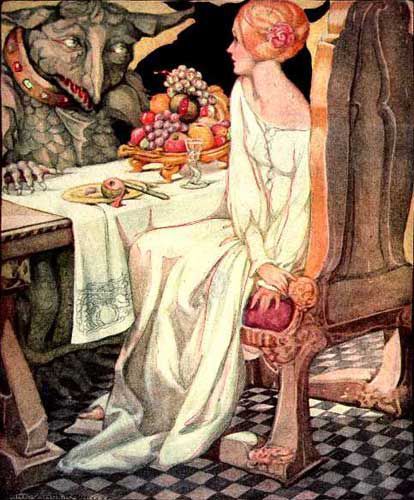 Anne Anderson, a Scot known for her art nouveau style, gives the Beast scales -- and a serious bejeweled collar.

Let’s say you’re trapped in an enchanted castle. Would you rather cozy up to a muskrat, or maybe a condor, a small-tooth dog or a one-eyed snake?

What a choice, right? All are second cousins, if you will, to the hairy, brocade-wearing groom in Disney’s “Beauty and the Beast” movies. Its latest, a live-action version, is in theaters now.

No, the horned one is not the only handsome prince ever turned into an animal. Fairy tales have long imagined grooms and brides as four-legged — even legless — creatures matched with exquisite human mates.

Nearly “every storytelling culture maps out dating practices with animal partners,” writes Maria Tatar in her new anthology “Beauty and the Beast: Classic Tales About Animal Brides and Grooms From Around the World.”

As the $300 million Disney remake tests its box office mettle, Tatar provides not just background about the famous story (its original message was different from today’s), but also offers dozens of similar versions and their successful (or not) couplings.

In South America, a shepherdess is carried off by a condor and rescued by a parrot. In Russia, an arrow lands near a frog, and a king tells his son he must marry the slick female amphibian. These matches sometimes turn out fine. As one steadfast princess insists: “I am married to a crab, and I want no one else.”

The stories are usually from a time when humans had more to fear from beasts than they do today. Beyond literal danger, however, the tales evoke “social and cultural anxieties about romance, marriage, and ‘the other,’” Tatar writes.

The stories often mention marriage beds, with some dark boudoirs hiding hideous lovers until a curious mate lights a candle or oil lamp. Readers know the marriages are consummated when the bride bears an animal-like offspring or lays eggs. (Likewise, in the TV series “Beauty and the Beast” in 1980s, the heroine played Linda Hamilton by gave birth to a kittenish creature.)

But the children sometimes resemble the human parent: A pig prince, who can remove his filthy skin at night, spawns a lovely son. A Native American tale begins bluntly: “Once a young man went out and came to a buffalo-cow fast in the mire. He took advantage of her situation. After a time she gave birth to a boy.”

Tatar, a Harvard University professor of Germanic languages and literature and of folklore who has edited and annotated the Brothers Grimm, Hans Christian Andersen and many other collections, isn’t a stickler for one traditional version of a fairy tale.

In fact, she said recently by phone, she believes Disney may have saved fairy tales from the dust bin when it started turning out movies such as “Snow White and the Seven Dwarfs” (1937).

“Many of my colleagues blast Disney for perverting fairy tales or making cartoon versions of them.

“They are cartoons, but they are not really very simple, and Disney really kept the stories alive at a time when they might have languished and just given way to stories like ‘The Little Engine That Could.’ I love the fact they stayed alive.”

And she hoped the new live-action movie would introduce new elements to the “tale as old as time.”

“Like all good folkloric memes, ‘The Beauty and the Beast’ migrates and morphs into new versions of itself,” Tatar writes. These stories are “constantly recycled and renewed.”

The first “Beauty and the Beast” for children was written in 1756 as a parable about good manners. A Frenchwoman, Madame de Beaumond, had adapted an adult version from 1740 by Gabrielle-Suzanne Barbot de Villeneuve, whose last name is honored as the fictional village in the new movie.

In the early tale for kids, Beauty is extremely self-sacrificing. Her devotion to the Beast is “founded on virtue.”

In addition, Tatar says, the story aimed to “steady the fears of young women, to reconcile them to the custom of arranged marriages, and to brace them for an alliance that required effacing their own desires and submitting to the will of a ‘monster.’”

In Beaumond’s version, Beauty has five siblings, including the type of sisters who tormented Cinderella, calling Beauty a simpleton.

Another departure from the Disney version is that there is no fading rose. The only flower in the story is the one the girl asks her father to bring back from a journey (a modest request compared to the furs and dresses her greedy sisters want).

Beauty’s father ends up in the Beast’s enchanted castle and, amid a snowy landscape, plucks a rose from an arbor. This angers his host, who says he’ll forgive the father if a daughter “consents to die in your place.” His youngest child (fairy tales often feature the youngest or most vulnerable, Tatar says) insists on sacrificing herself.

Disney emphasizes the theme of “the other” by having villagers carry weapons and torches, a la “Frankenstein,” to attack the hideous creature — although its village has an impressively diverse cast. As for its ballyhooed “gay” character in the live-action remake, Gaston’s syncophant LeFou dances for a mere second with another man.

One important similarity the old story has is Beauty’s love of books, which Disney movies emphasize in both the 1991 animated feature and the new film starring Emma Watson.

Watson’s Beauty is a bit more independent than the animated girl. With her well-worn boots and lack of serious curls, she seems to prefer to dress down, at one point ripping off annoying layers of yellow silk. Although she’s obviously a more modern woman, 2017’s Beauty retains filial piety (her father is played by St. Louis native Kevin Kline).

Tatar isn’t convinced that morality stories persuade children to act a certain way, but she does think that parents who discuss movies and stories with kids can emphasize elements. And adults can introduce modern issues of racism and xenophobia.

That makes “Beauty and the Beast” particularly topical, she says: “How do we deal with ‘the other,’ the person we think of as ‘the monster,’ and to what degree do we project our own fears and anxieties onto others to make them monstrous?”

The stories take up big existential questions, she says, and enable discussion.

The vague term “Beast” has allowed illustrators through the years to depict him in many different ways. In one 19th-century image he looks like a mild-mannered walrus with paws.

The famous story has also provoked varying interpretations. At the Daily Beast, a writer says: “From glamorizing Stockholm syndrome to being anti-feminist to, yes, even winking at bestiality, criticisms of ‘Beauty and the Beast’s’ fairy tale love story have paraded over the years like enchanted dishes performing a show-stopping production number.”

Tatar’s collection shows that countries around the world have similar stories, some featuring the woman as the animal, which may be hard to label with the same modern criticisms.

She says that women, in part because of their childbearing ability, were thought to be closer to nature. Female animal mates tend to be more diminutive and are often either beautiful birds or petite frogs. As for that raped buffalo, well, folklore often breaks its own patterns and rules.

So tales don’t always end happily. A Lithuanian snake with a single eye kills those she bites. A beautiful maiden emerges, though, when a peasant beats the snake until its skin breaks open. Still, after years of happiness with the peasant and children, she retakes her snake skin and kills her family “with her poisonous kiss.”

Tatar says oral tales probably were more violent and sexual than the ones collected in famous books. In one version of “Little Red Riding Hood,” the girl does a strip tease for the wolf. The Brothers Grimm censored heavily.

Some of the stories in Tatar’s collection work as origin stories, such as how the parrot came to be. But many focus on matrimony and relationships.

An English story features a fellow who only seems to want his prize to stop calling him a “great, foul, small-tooth dog.” Eventually she learns she can get what she wants by talking nicely, and the dog turns into a handsome man with the “finest and smallest teeth you ever saw.” Perhaps attitude does make all the difference.

“We need the symbolic to navigate the real,” Tatar says. “Instead of telling the story of courtship where the husband is something of a beast, we transform it. ...

“So let’s pair a human with a beast because sexuality is also the point of intersection between the human and the beastly. You can think of sexuality in terms of tenderness and affection, but it also is sort of beastly and can have an element of assault, particularly in arranged marriages.”

In the 21st century, some roles have been reversed: Today humans are more likely to be beasts’ enemies. Thus Disney’s Gaston, who is not an 18th-century character. Gaston brags about how many animals he slays, bringing up an ecological theme.

That show, in which humans and androids are both handsome, emphasizes another angle to the tale as old as time: Which is the beast?

'Beauty and the Beast' remake has charms of its own

Swans in folktales and myth

This image released by Disney shows Dan Stevens as The Beast, left, and Emma Watson as Belle in a live-action adaptation of the animated classic "Beauty and the Beast." (Disney via AP) 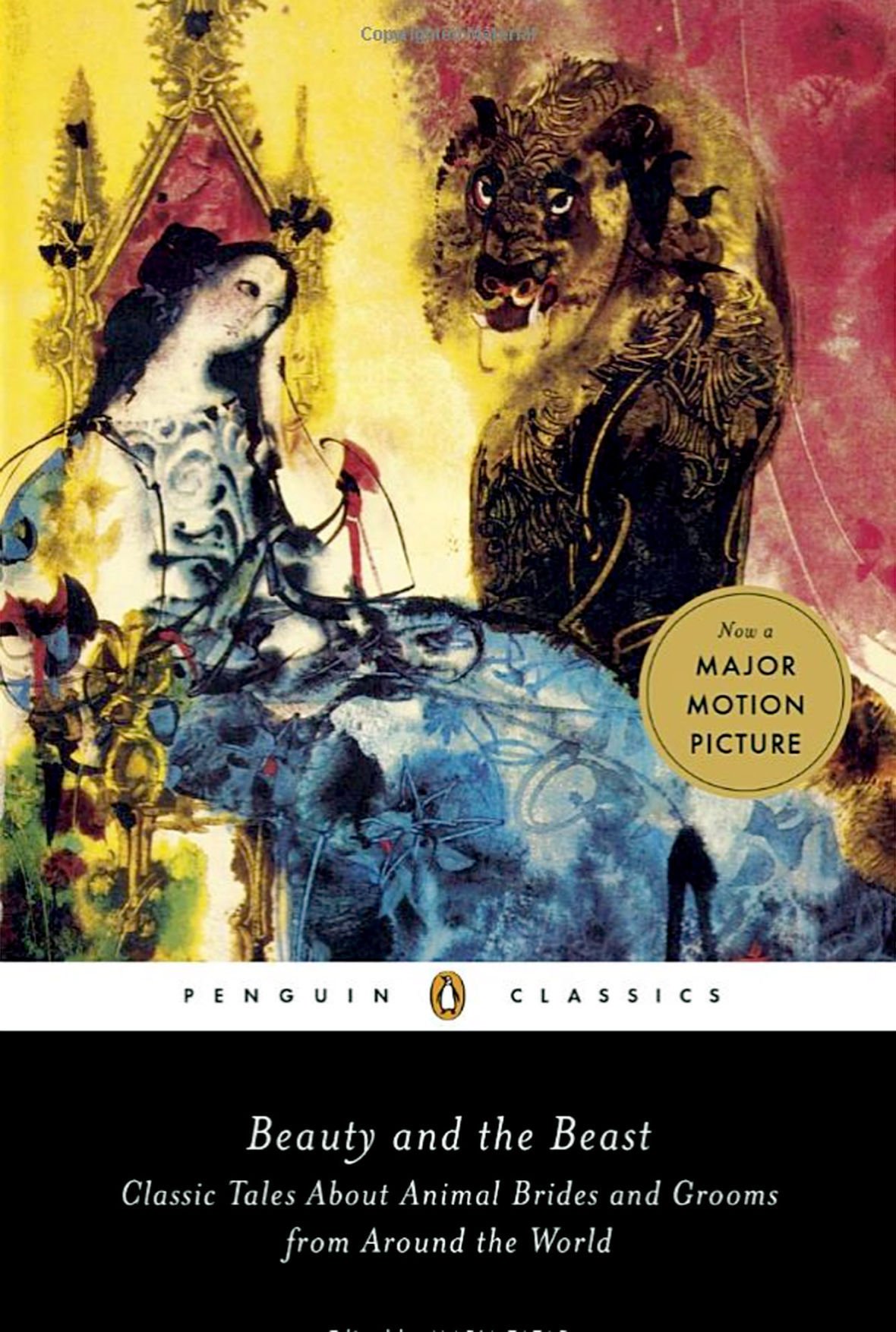 "Beauty and the Beast: Classic Tales About Animal Brides and Grooms From Around the World," edited by Maria Tatar.

Anne Anderson, a Scot known for her art nouveau style, gives the Beast scales -- and a serious bejeweled collar. 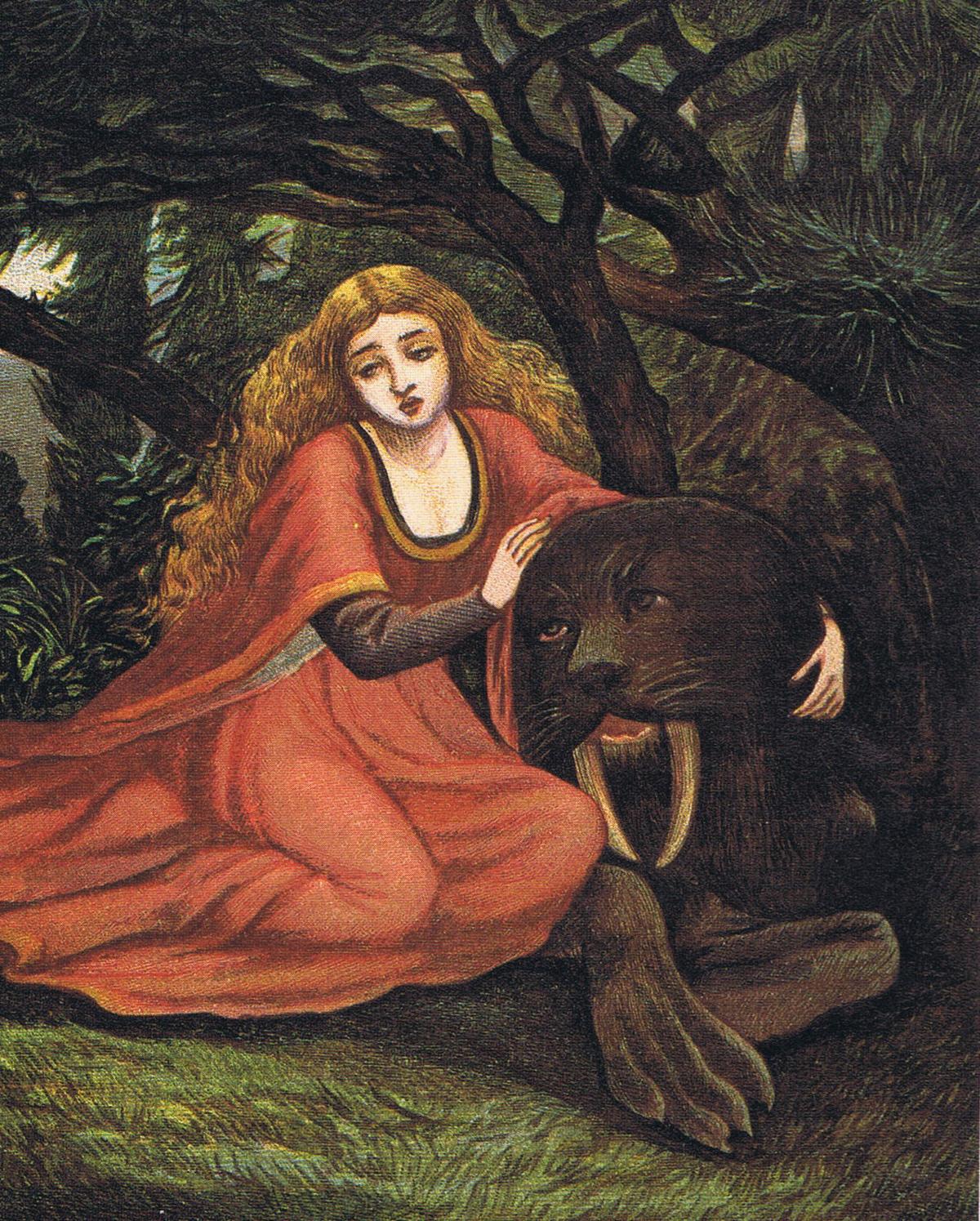 A pre-Raphaelite Beauty comforts the walrus-tusked Beast in this 1875 illustration by Eleanor Vere Boyle. 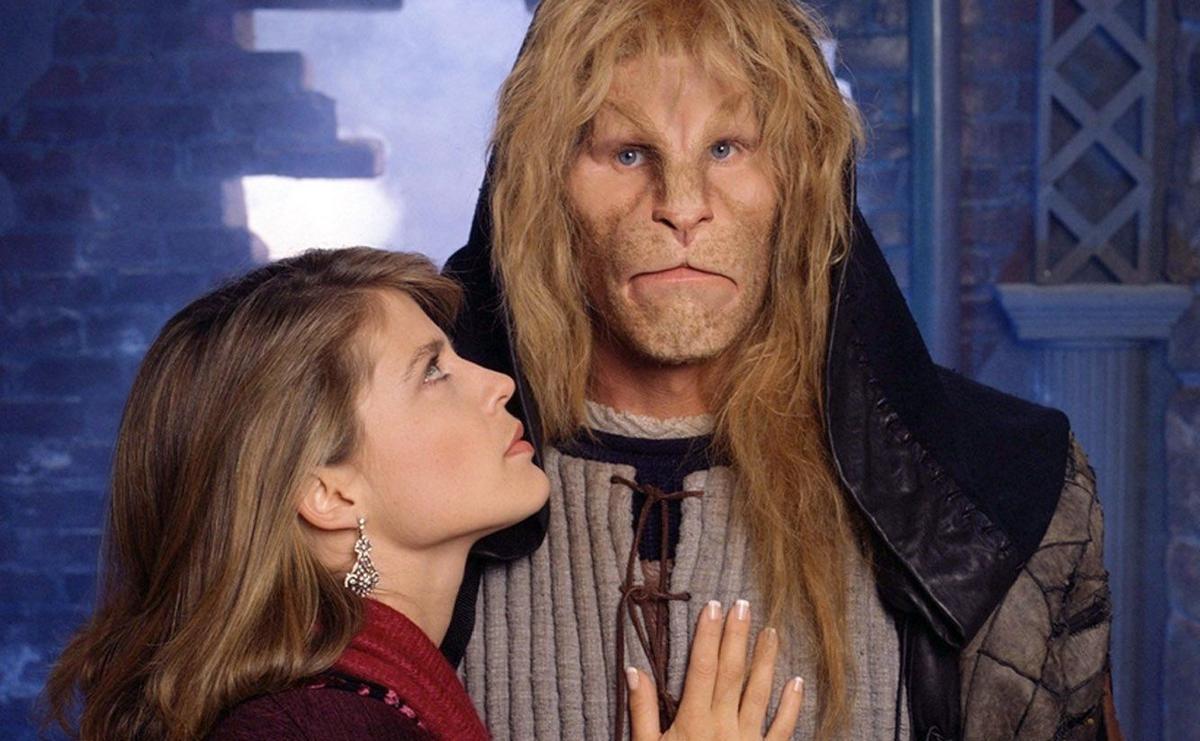 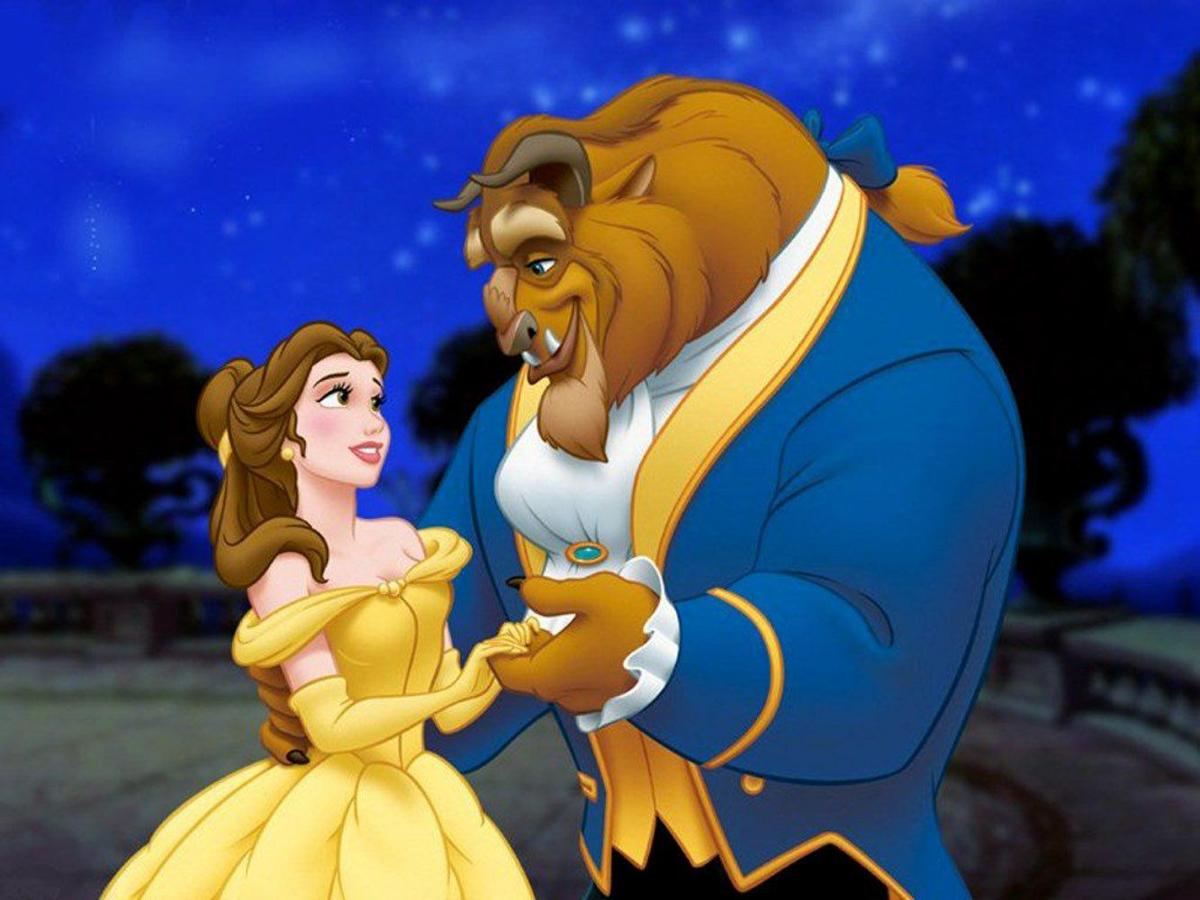 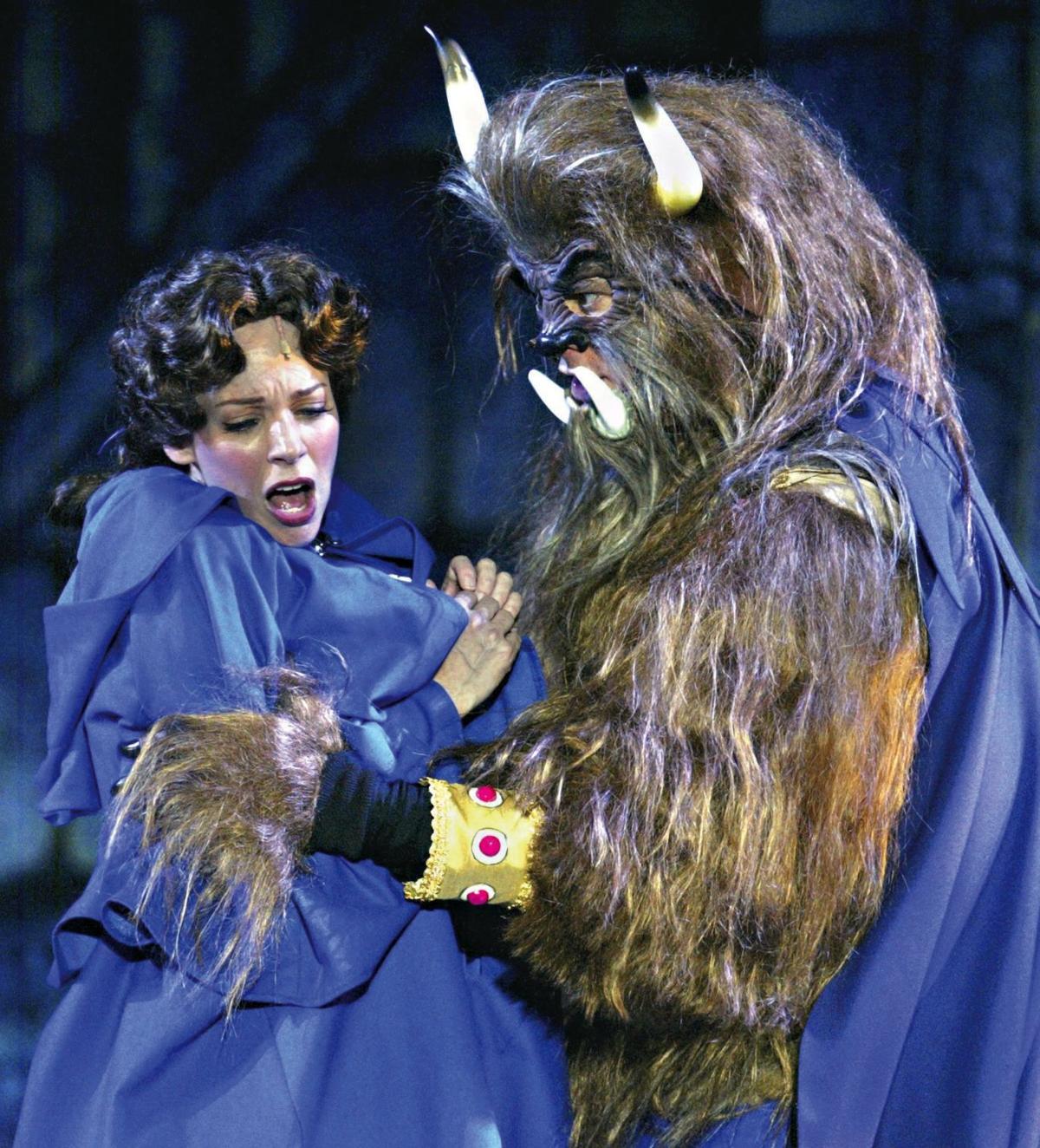 "Beauty and Beast" at The Muny in June 2005. Sarah Litzsinger, as Belle, struggles to break free of the horned and hirsute James Clow. Post-Dispatch file photo 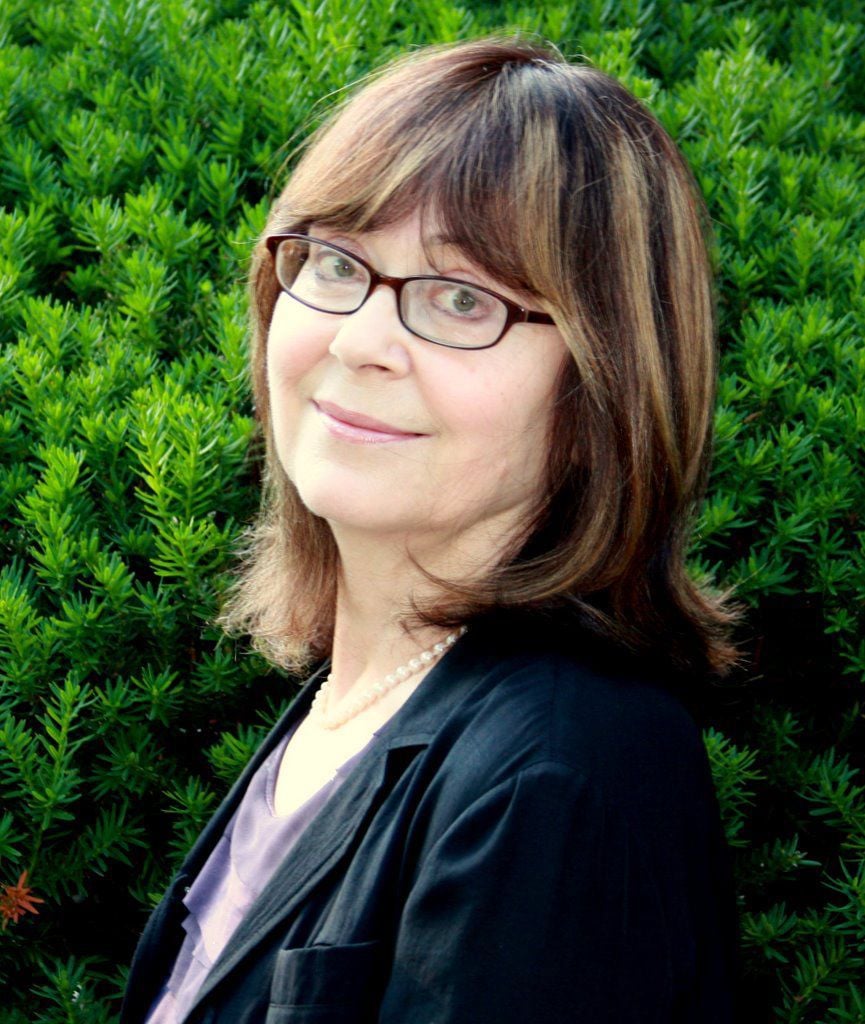