In defense of 'The Beverly Hillbillies,' forgotten manuscript is published
0 comments
Share this
{{featured_button_text}}
1 of 4 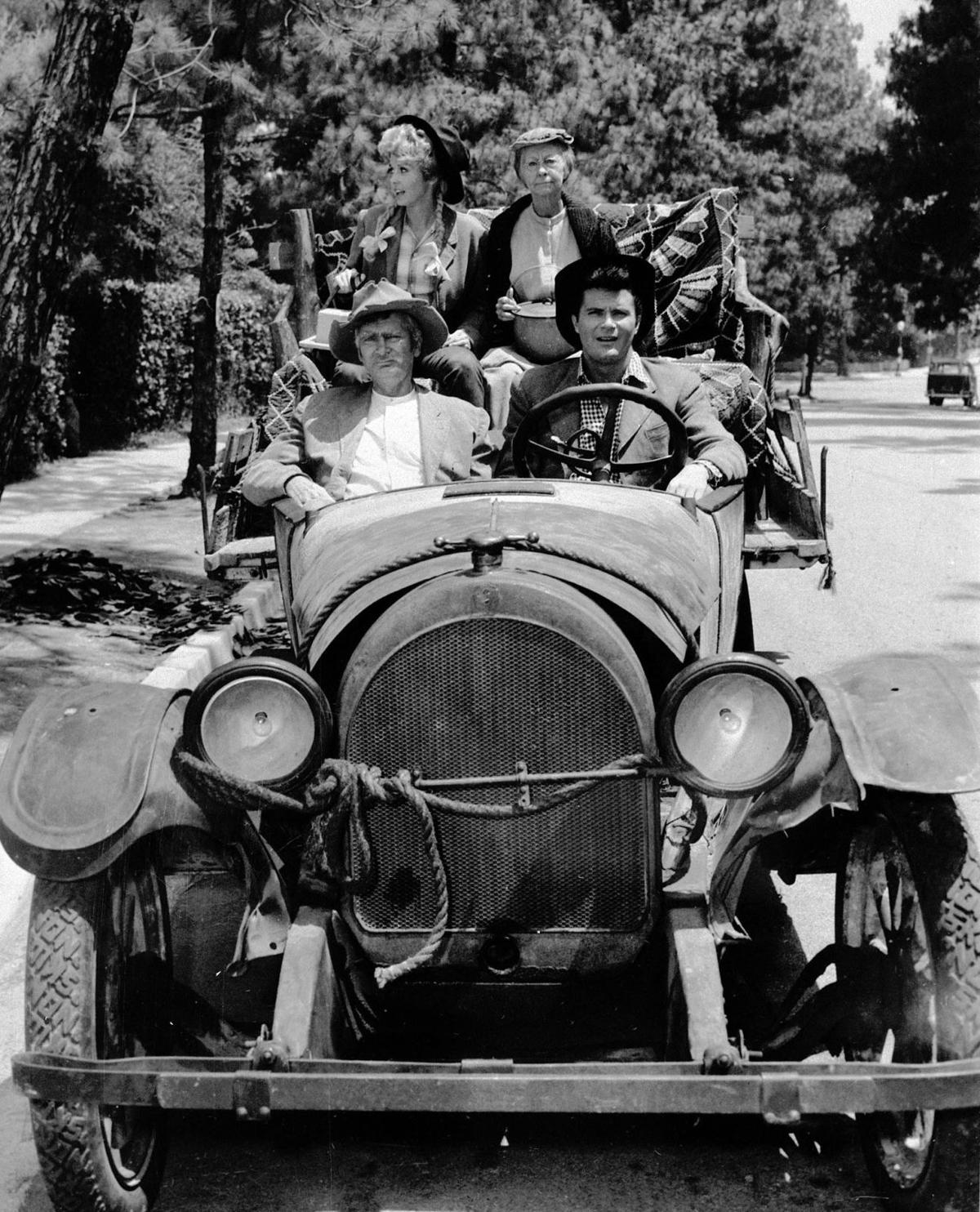 From left: Buddy Ebsen, Donna Douglas, Irene Ryan and Max Baer in a scene from "The Beverly Hillbillies" 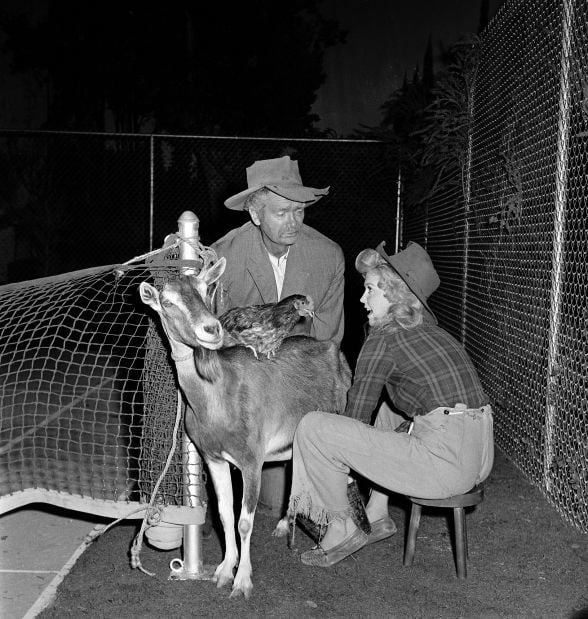 Buddy Ebsen and Donna Douglas in a scene from "The Beverly Hillbillies," on Aug. 9, 1962. 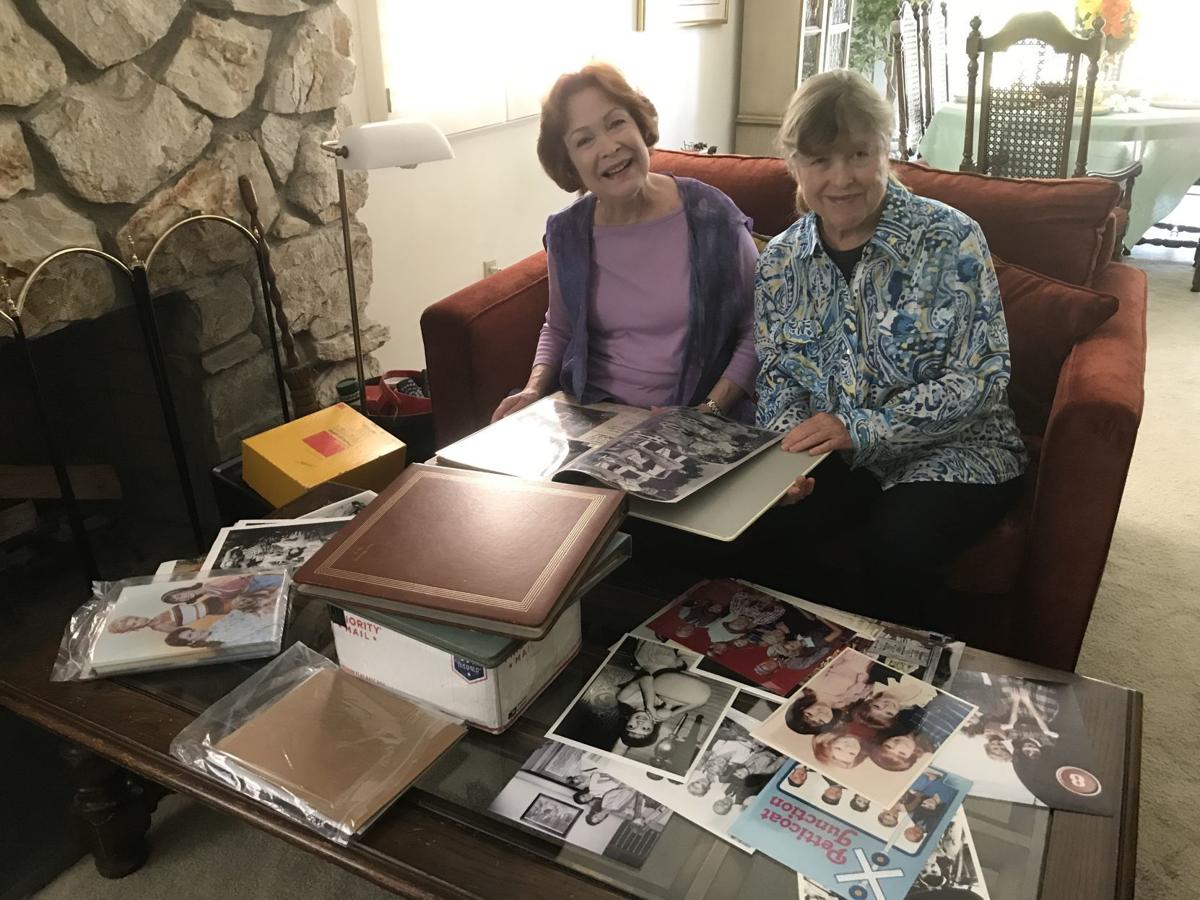 Linda Henning (left) and her sister Carol look through memorabilia from the radio and TV career of their father, Paul Henning, at Linda Henning's Los Angeles-area home. Photo courtesy of Robin Blakely 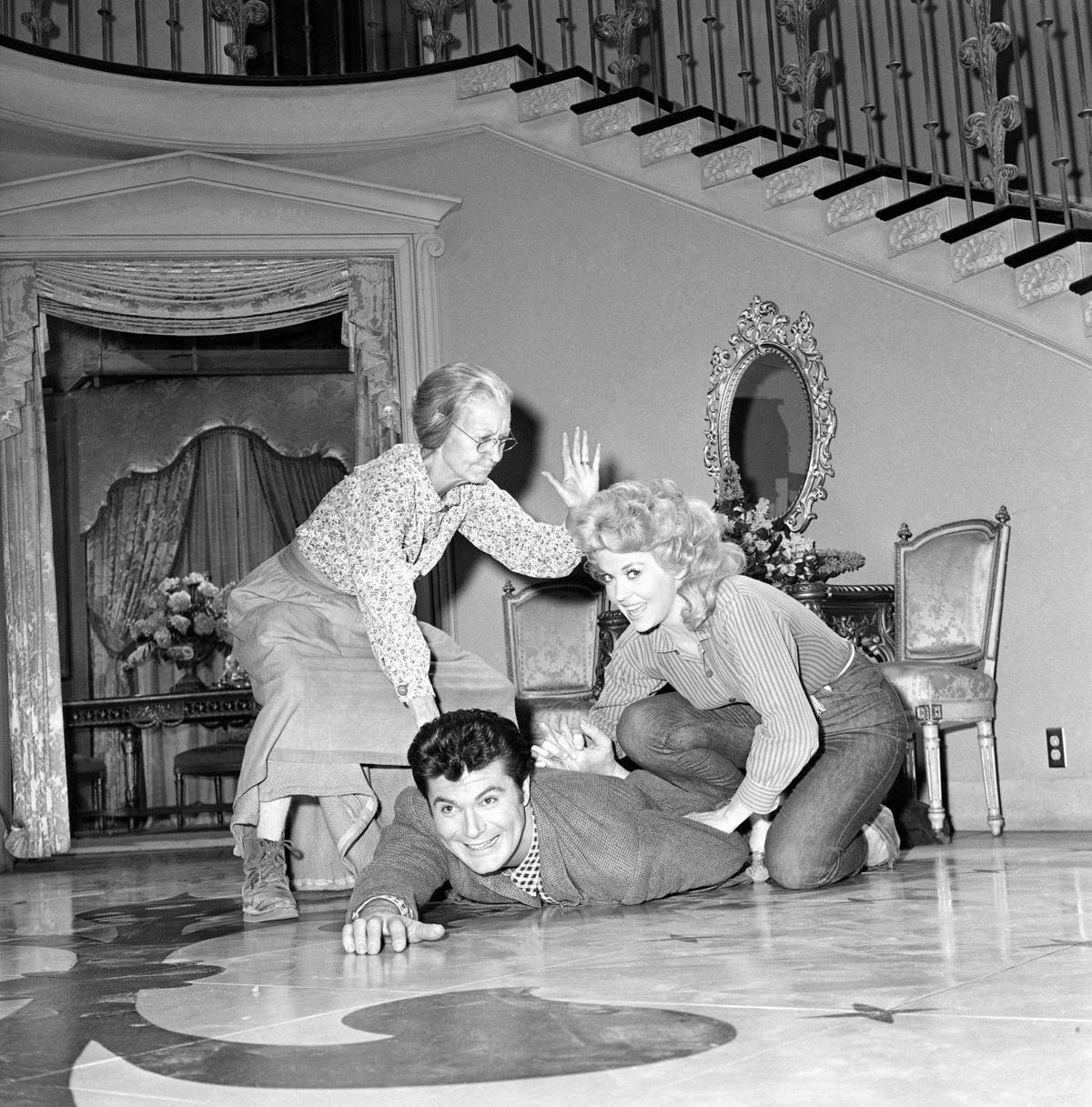 From left: Irene Ryan, Max Baer and Donna Douglas on the set of "The Beverly Hillbillies" May 7, 1963, in Los Angeles. (AP Photo/David F. Smith)

By Brian Burnes • Special to the Post-Dispatch

Ruth Henning couldn’t find the one book she wanted to read.

So, like many writers before her, the St. Louis native wrote the book herself.

That book, “The First Beverly Hillbilly: The Untold Story of the Creator of Rural TV Comedy,” honors Henning’s husband, television producer Paul Henning, who grew up in Independence, Mo., and achieved spectacular success in the Los Angeles entertainment industry of the 1960s.

Her manuscript remained unpublished for more than 20 years before being released recently by a Kansas City-area library district and historical society.

In her book, Henning unloads on the critics who mocked her husband’s situation comedy “The Beverly Hillbillies,” which attracted a vast audience when it appeared on CBS in 1962.

“Everybody hated it,” Henning wrote, “the sophisticates, the industry insiders, the intellectuals, and most of all, the critics.”

Henning described these critics as “smart guys, eating lunch on the Sunset Strip and trying not to drop bean sprouts on their imported jeans” along with others “twining pasta on their forks and wiping virgin olive oil from their chins.”

“Our mother always felt Daddy didn’t get nearly the appreciation he should have gotten,” Linda Henning, a daughter of Ruth and Paul, said recently.

“Hillbilllies” showcased the Clampett clan, whose members moved to Southern California after patriarch Jed’s stray rifle shot revealed a subsurface oil pool on his hardscrabble acreage. (That land’s location was sometimes obliquely placed in the Ozarks; several episodes of the show were filmed at Silver Dollar City in Branson, Mo.)

Comedy came in the subsequent collision of cultures. The good-natured regard Clampett family members displayed for the pool behind their new Beverly Hills mansion — which they described as a “cee-ment pond” — comforted viewers during the constant upheaval of the 1960s, Linda Henning said.

The success of “Hillbillies” prompted the production of two other CBS comedies, “Petticoat Junction” and “Green Acres,” both featuring gentle send-ups of rural life.

Yet “Hillbillies” exasperated some critics just one year after Newton Minow, Federal Communications Commission chairman, had delivered his “Vast Wasteland” speech in which he chastised the nation’s broadcasters for not doing more to serve the public interest.

“If television is a vast wasteland, this show is Death Valley,” one critic wrote of “The Beverly Hillbillies.”

Paul Henning later pushed back when editors at Time magazine asked for an interview.

“Daddy told the secretary to tell them to — how can I put this in a nice way? — shove it, basically,” said Linda Henning, who portrayed Betty Jo Bradley on “Petticoat Junction,” produced by her father.

“They had been so nasty, these people who were just so taken with themselves and so erudite. I don’t think they had a clue of what it took to create something like ‘The Beverly Hillbillies.’

Paul Henning on the genesis of "The Beverly Hillbillies" - EMMYTVLEGENDS.ORG

Paul Henning began his education in episodic entertainment during the 1930s at KMBC, a Kansas City radio station.

There he met Ruth Barth, born in St. Louis in 1913 to Benjamin Barth and Alice Burris Barth. The two had married in 1908 after Alice Burris had moved to St. Louis from Eldon, a town southwest of Jefferson City.

Linda Henning has only limited knowledge of her family’s St. Louis background.

“My mother was born in St. Louis, and her family lived there for eight years before her parents moved to Kansas City, where her father and a brother started a restaurant,” Henning said.

“Creative young people swarmed the studio at KMBC,” she wrote some 60 years after the fact. “As far as I was concerned, it was the answer to everything.”

Barth and Henning married in 1939 on their way to Los Angeles.

A muted theme throughout “The First Beverly Hillbilly” is the author’s occasional reference to her own deferred dreams.

Throughout the 1960s, Paul Henning stayed at the studio late and left for work early the next morning. When his wife once had suggested that perhaps a role could be found at the studio for her, her husband demurred.

“I have to hand it to my mother,” Linda Henning said. “When Daddy started to do better and get more jobs, and then we children came along, she just said, ‘OK, this is what I am doing, raising these children.’”

Ruth Henning never quit writing, though. Her short story about a television station switchboard operator who invests $50 in a portrait from a glamour photography studio appeared in the March 30, 1956, issue of Collier’s. Other authors receiving bylines in that issue included novelists John O’Hara and James Salter.

“My mother was determined to do certain things,” Henning said.

“I’m sure that she had frustrations, and I know there were times when my mother lived vicariously through me.”

By the early 1970s, “Hillbillies,” “Petticoat Junction” and “Green Acres” all had been canceled, victims of a network purge of “rural” content.

Paul Henning on the cancellation of "The Beverly Hillbillies" - EMMYTVLEGENDS.ORG

It’s difficult to imagine “Hillbillies” ever represented a threat to the country’s cultural well-being, said Anthony Harkins, author of “Hillbilly: A Cultural History of an American Icon,” and an associate history professor at Western Kentucky University.

He can, however, discern Jed Clampett’s continuing impact on the “reality” shows that today dominate cable schedules.

“There are probably 10 shows set in the mountains, featuring men who are being men and not depending upon any kind of office culture or government handout,” he said.

Ruth Henning began writing her book in her late 70s and finished it in 1994.

Although she never found a publisher, she did forward a copy to her friend Sue Gentry, a longtime reporter for the Examiner of Independence, Mo.

Gentry died in 2004 leaving no heirs. Staff members of the Jackson County Historical Society later retrieved the manuscript from one of the two dozen boxes of papers Gentry had donated. With the Henning family’s support, the society published the book with the Mid-Continent Public Library.

That’s despite the lack of any random sex or violence — a marketing issue Ruth Henning said she confronted her husband about.

“How do you expect me to sell a book without any dirt to dish?” she asked him.

Paul Henning, according to his wife, stood up and looked at his watch.

“I think if I start now I’ve just got time to go out and do something,” he said. “What time is dinner?”

Brian Burnes is a freelance writer in Kansas City, Kan.

From left: Buddy Ebsen, Donna Douglas, Irene Ryan and Max Baer in a scene from "The Beverly Hillbillies"

Buddy Ebsen and Donna Douglas in a scene from "The Beverly Hillbillies," on Aug. 9, 1962.

Linda Henning (left) and her sister Carol look through memorabilia from the radio and TV career of their father, Paul Henning, at Linda Henning's Los Angeles-area home. Photo courtesy of Robin Blakely

From left: Irene Ryan, Max Baer and Donna Douglas on the set of "The Beverly Hillbillies" May 7, 1963, in Los Angeles. (AP Photo/David F. Smith) 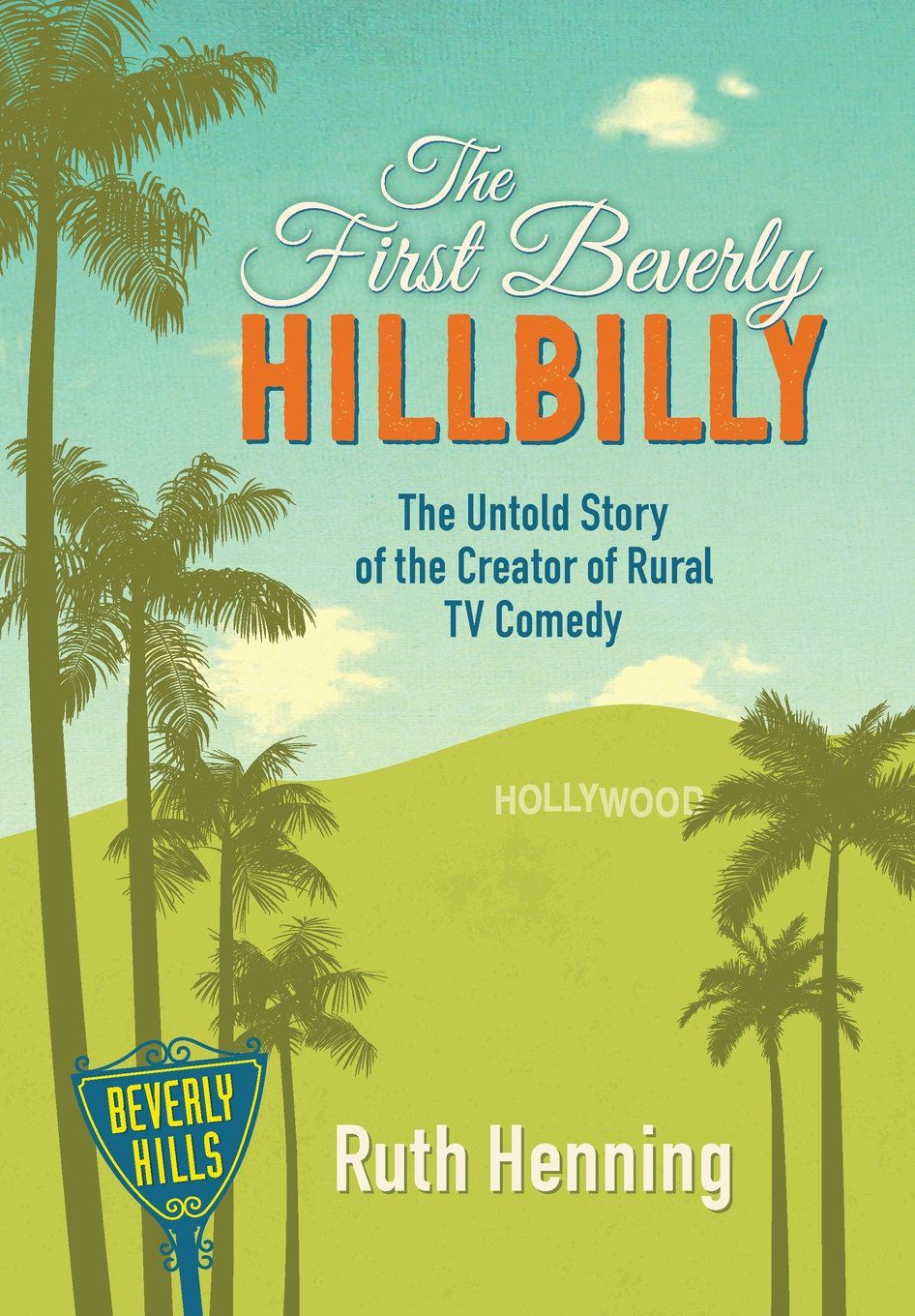 "The First Beverly Hillbilly: The Untold Story of the Creator of Rural TV Comedy" 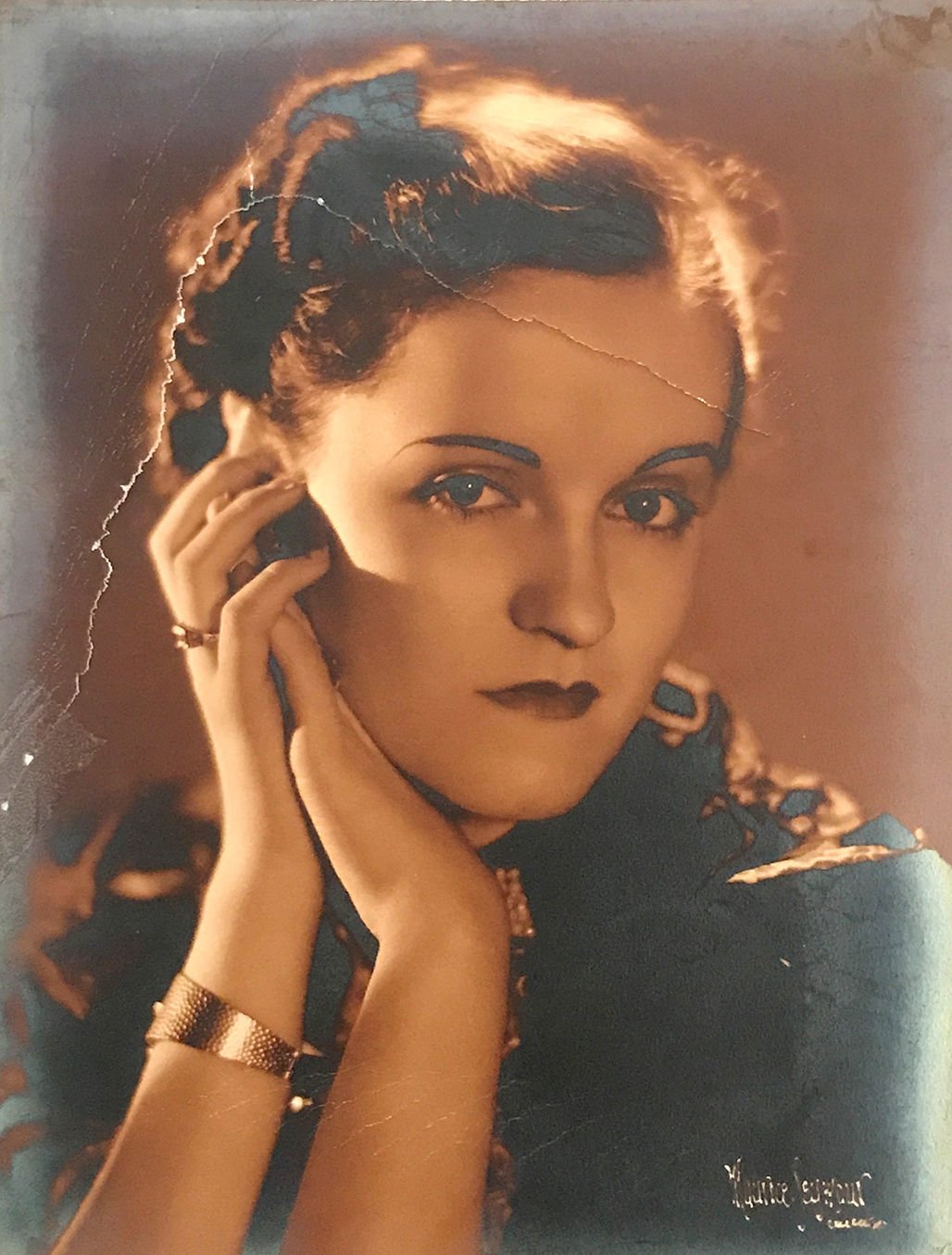 Ruth Henning in an undated photo 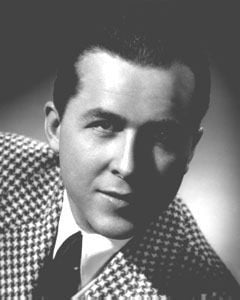