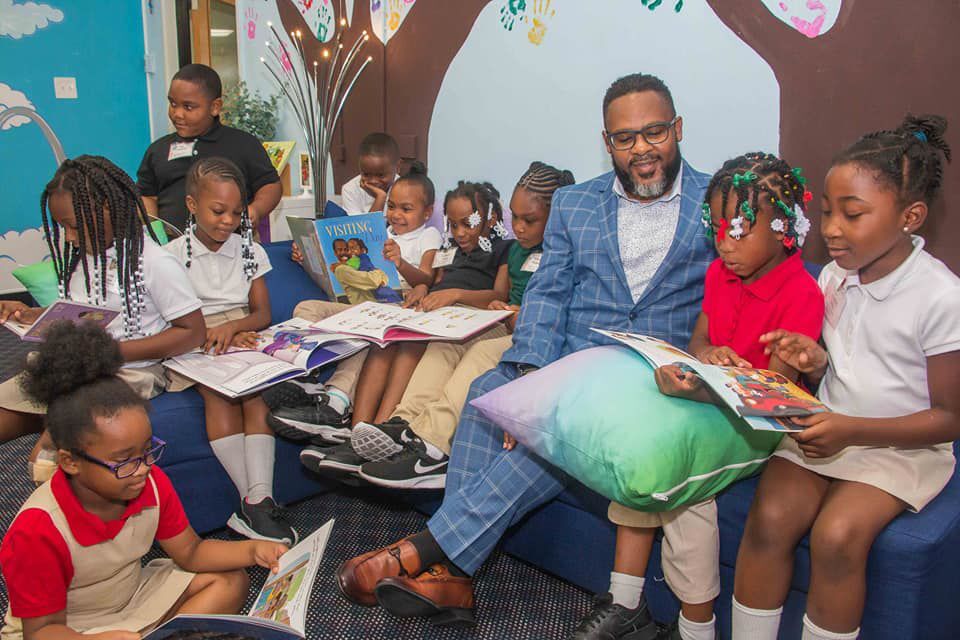 Julius B. Anthony sits with children in a Believe literacy lab in 2019. The space is in Sister Thea Bowman Catholic School in East St. Louis. 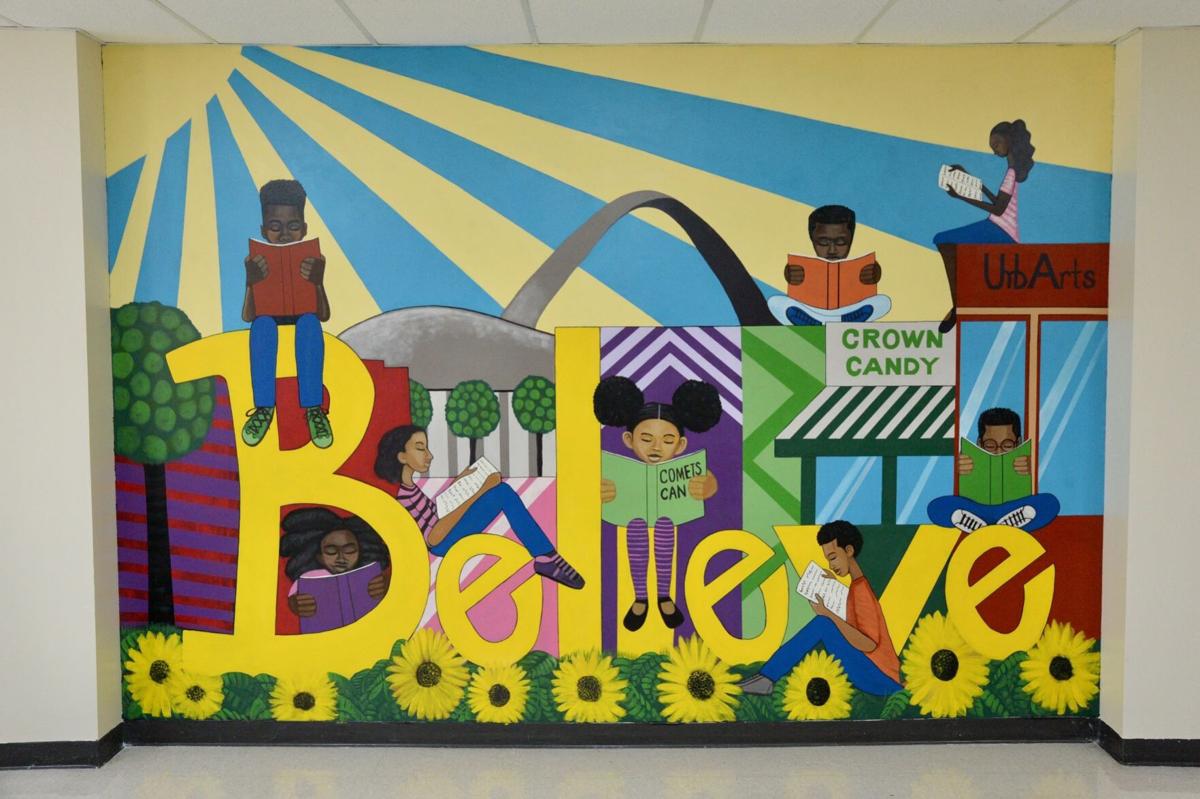 A Believe Project mural by Billy Bill at Old North Confluence Academy in 2019. 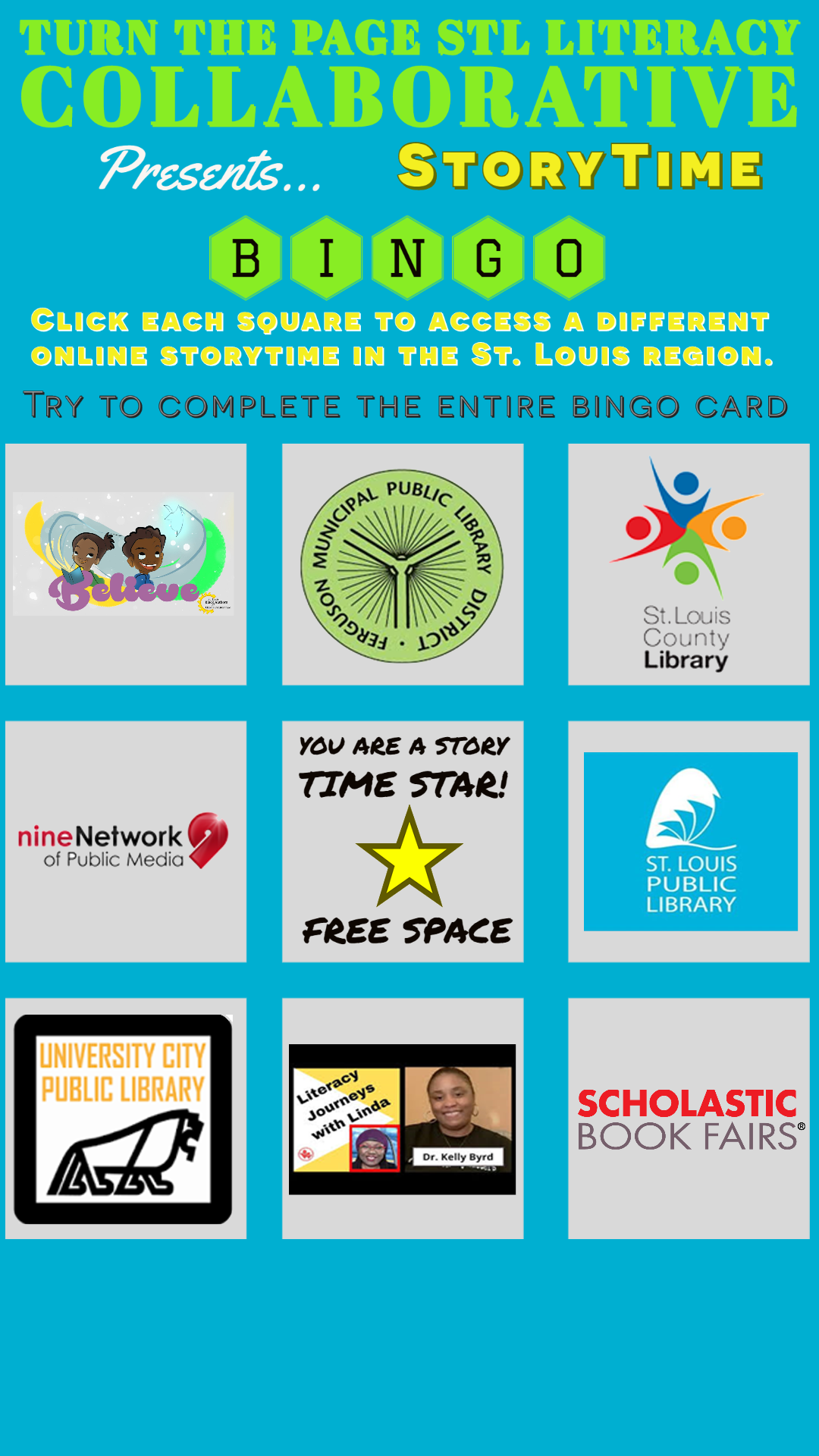 A "bingo card" from Turn the Page STL sends users to local storytimes. 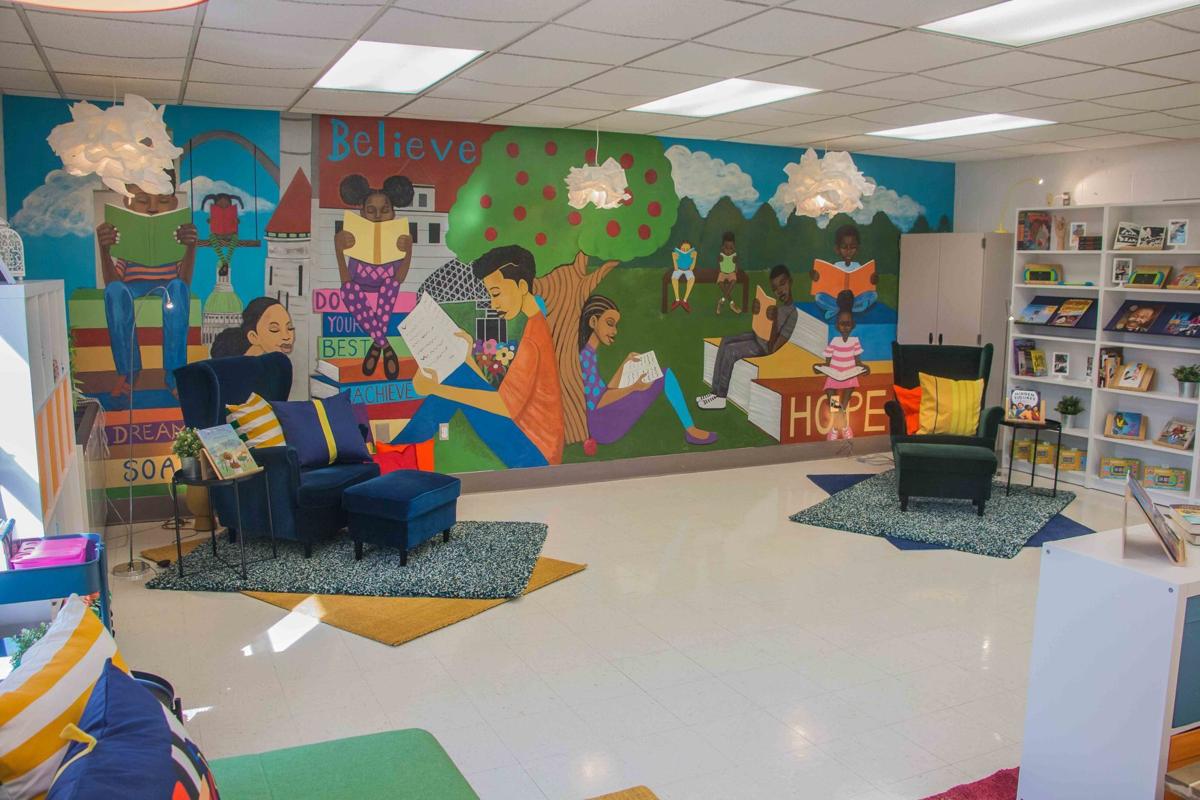 A Believe literacy lab at Glasgow Elementary School in the Riverview Gardens district features a wall mural by Billy Bill.

No one is marching in the streets to protest one of St. Louis’ biggest problems — even though the area’s crime rate, employee pool and health outcomes are all affected.

But it’s a hard truth: St. Louis schools struggle to teach kids, especially Black kids, to read. In some city schools, fewer than 10% of third-graders test proficient in reading.

But it’s not just schools in poor neighborhoods.

In richer ones, more Black third-graders may test “proficient” in reading (aka English language arts) on state tests. That’s below “advanced” but higher than “basic” and “below basic.”

But the scores are still lower than those for the overall student body.

In Clayton, 55% of Black third-graders did test proficient in 2019. But compare that to all of the district’s third-graders, who were 76.8% proficient.

That’s among the best of the public districts.

And if third-graders can’t read “Charlotte’s Web” or even “Captain Underpants,” they might not graduate from high school, let alone college. If they can’t read well or earn degrees, their lives — and community — suffer.

Another advocate, Julius B. Anthony, agrees.

“It’s unconscionable and criminal that the region allows generation after generation to get through the school systems and not be fully literate,” he says.

Both point to research that shows that if third-graders don’t read well, they are four times as likely to drop out of school. Literacy activists often focus on kindergarten to third grade because once students get into fourth grade, they are expected to ably “read to learn” different subjects. Teachers have moved way beyond phonics, and poor readers won’t understand textbooks on, say, history or science.

St. Louis has dozens of entities from schools and libraries to literacy nonprofits, volunteer organizations and bookstores that work to help students read.

But Anthony and Greening are among those trying new ways to raise literacy rates, focusing on seven "Promise Zone” areas that desperately need help.

“The majority of the Black community is under-literate,” Anthony says.

A trained educator who has taught first grade, he leads St. Louis Black Authors of Children’s Literature, which has about 15 members.

His focus now is on creating lively “literacy labs” where young children see themselves in every book on the shelf. These spaces, which have colorful murals with Black and brown children and bright chairs and pillows, usually offer about 3,500 books by national and local authors that reflect their readers’ lives.

“Why would you want to go to a place every day and never see yourself in the learning process?” Anthony asks. “You could have a hundred literacy groups, but if none of them key into why children are disconnected from books, then we’ll continue to have this problem.”

When the spaces open, he says, there is “a shift in the energy in those schools — the kids couldn’t wait to get into those spaces.”

The fifth Believe lab will open in May in the Halls Ferry Intermediate School in the Ferguson-Florissant School District, he says. Each lab, financed through grants and donations, costs about $70,000 for a three-year agreement with the school or community center where it is placed.

A group that receives a Believe space has to sign an agreement that “children are allowed to pick the books that they want, read the books they want to read and do all the other activities they want,” Anthony says.

So often, young students are told what to do every second of the day, he notes.

“This space is a ‘yes’ space” where children have control in picking books (even taking books they’d like to keep).

He wants to show that titles that reflect their communities will increase confidence among kids who have been underrepresented in books for years. And he expects that increased confidence and enthusiasm for books will boost competence in reading.

“You can’t get to phonics or fluency unless kids want to do it,” Anthony says. “Give them texts that interest them.”

A new chapter of a national group, the national Campaign for Grade-Level Reading, is less about dictating what schools and others should do to increase literacy and more about collaborating with the dozens of literacy stakeholders in the area.

Lisa Greening, who headed the local Ready Readers for a decade, was so impressed by Turn the Page KC in Kansas City that she decided to apply to lead a chapter here and align with a similar name, Turn the Page STL.

Kansas City, led then by Mayor Sly James, had boosted its third-grade reading proficiency from 35% to almost 55% in seven years, Greening says.

She went there to ask, “What are you doing?”

St. Louis, on the other hand, is worse off than ever, she says. “We’re more segregated in our schools now than before Brown vs. the Board of Education.”

Turn the Page STL became an official chapter just in January 2020 (Anthony is also on its board). This year, the group released a report that compiles data about the metro area’s literacy problems, especially Promise Zone school districts and charter schools.

Turn the Page STL met with focus groups of families, teachers and literacy leaders while convening work groups around the issues of illiteracy and found many things that hamper young readers. Among them are that trust systems are broken, Greening says.

“After generations of systemic racism and underfunding of systems, families have lost trust in our major institutions, including our schools, libraries, summer programs,” she says. “Families often said they did not even trust their neighbors.”

Turn the Page’s report details five major factors that affect why kids aren’t reading well by the end of third grade — including that communities aren’t aware of the depth of reading issues.

Lack of school/kindergarten readiness • Less than half of children from low-income families come to kindergarten ready to learn. They often lack vocabulary skills or experience in high-quality preschools.

Teacher preparedness • Superintendents and other officials say most K-3 teachers are not taught how to teach a child to read based on the science of reading through a culturally competent lens. Poorer districts that pay less tend to have more inexperienced teachers.

Community awareness • St. Louis, a fragmented community with generations of segregation and racism, is not fully aware of how crippling the issue of illiteracy is to the city's success.

While acknowledging that teachers can’t fix systems of poverty, Greening does point to schools’ role in illiteracy:

“Teachers are underprepared. They often aren’t taught how to teach students decoding skills in a culturally responsive way.”

One thing Turn the Page would like to cultivate is having “reading captains” in neighborhoods where families can go for accurate literacy information.

“We need to provide honest information at the grassroots level for our families in one of the most fragmented cities in the country,” she says.

And this year’s Missouri Assessment Program test for third-graders is likely to show that the pandemic’s disruptions have hurt literacy scores even more, she says. “There’s so much distress.”

Bookstores such as Left Bank Books have long raised money or held book drives to help donate books to city schools. The Noble Neighbor is a recent nonprofit whose name is a play on the Novel Neighbor bookstore in Webster Groves.

Like the other groups, it relies on donations and grants to help students in underserved communities.

Publishers don’t usually send high-profile authors to visit poorer schools because the visits don’t lead to big book sales. So the Noble Neighbor raises money to buy hundreds of books for kids who want to meet an author and have them sign a book.

Of course authors have not visited schools during the pandemic. But the Noble Neighbor, which serves all grades, is “still plugging away and able to offer virtual visits,” says Kelly Edwards, its executive director (and former events coordinator at the bookstore).

In the past couple of years, the nonprofit group bought books by superstar author Jason Reynolds (the “Ghost” and “Track” series) and illustrator Christian Robinson (“Last Stop on Market Street”) for events with hundreds of kids.

This year, the Noble Neighbor arranged for a virtual visit by Ilyasah Shabazz (“The Awakening of Malcolm X”) with three McCluer high schools. In February it received a commendation by the American Association of School Librarians.

“The caliber of people we’ve had has been incredible, says Edwards, who has also been in communication with Anthony and Greening.

“We are so excited about offering these author visits and promoting literacy.”

CHICAGO — In the world of children's books, villagers can protect their water from a black snake, dark skin is as beautiful as the night sky, …

All newborns to receive library cards in St. Louis County

Library's Born to Read program in 17 hospitals and clinics

The new president of St. Louis Language Immersion Schools is leading a structural overhaul of the schools, after the schools bore reprimands for its lackluster performance and large racial achievement gap.

Compare your school: A look at the 2016 MAP scores

Racial disparities in income and poverty remain stark, and in some cases, are getting worse

Julius B. Anthony sits with children in a Believe literacy lab in 2019. The space is in Sister Thea Bowman Catholic School in East St. Louis.

A Believe Project mural by Billy Bill at Old North Confluence Academy in 2019.

A "bingo card" from Turn the Page STL sends users to local storytimes.

A Believe literacy lab at Glasgow Elementary School in the Riverview Gardens district features a wall mural by Billy Bill.