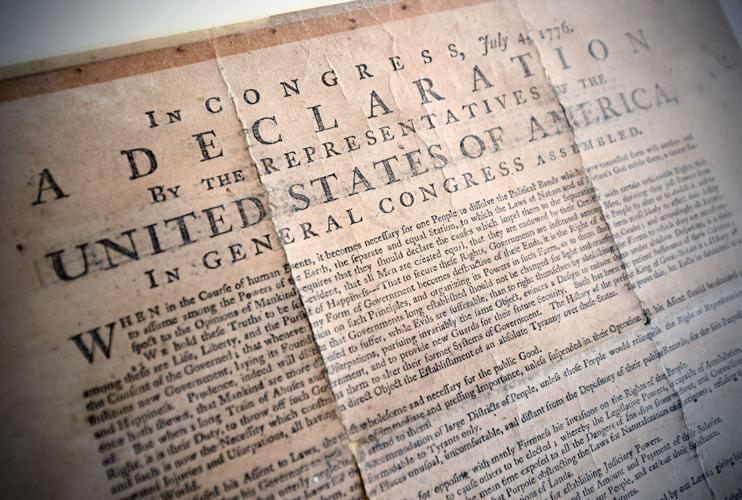 A copy of the Declaration of Independence at the Olin Library at Washington University in St. Louis. (James Byard/WUSTL Photos) 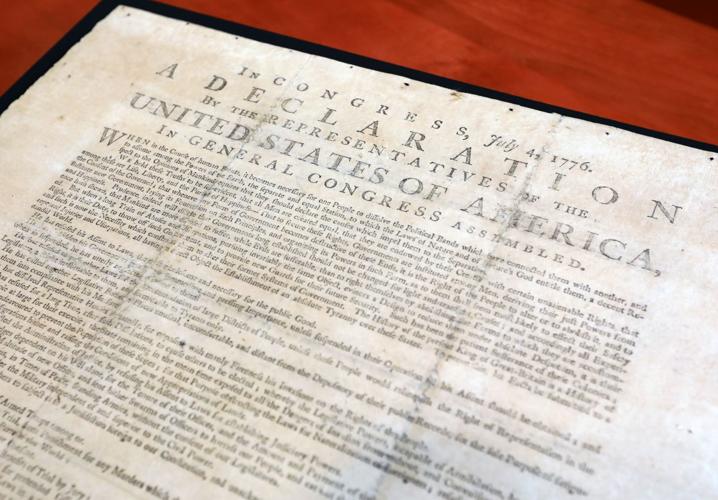 Wait, what? One of the country’s most important and valuable documents is in St. Louis?

Your guide to Fair St. Louis and July Fourth

Here's where to find music, fireworks and more fun.

Yes, you can visit a copy in St. Louis, and it’s older and more legible than the one in Washington, D.C.

The official handwritten Declaration of Independence wasn’t even signed until Aug. 2, 1776. That revered, calligraphic version is in the National Archives, much faded.

But a copy at Washington University in St. Louis actually was made earlier than the official document. The university was given in 2015 a rare, printed broadside and has built a permanent display of its copy.

On Tuesday, a university historian and legal scholar will discuss the document at an event in Olin Library, open to the public.

As our nation celebrates the 242nd anniversary of the Declaration — the birth of the United States of America — the famous act of resistance marks the reason for our Fourth of July holiday. And the document, with some confusing quirks, recalls the dramatic story of how it was distributed through the colonies.

“It was a news release in many ways,” says David Konig, a law professor and professor emeritus of history at Washington University. “It wasn’t a holy artifact.”

So a quick rundown. The Second Continental Congress voted by states for independence on July 2, 1776. The vote wasn’t unanimous, though. New York abstained, awaiting approval from its assembly. New York’s OK came July 9.

But by that time, word had already spread.

Thomas Jefferson was the primary writer of the Declaration, and after edits and insertions, the document was approved the morning of July 4.

Philadelphia printer John Dunlap was given the information and worked overnight July 4-5 to produce an estimated 200 copies. They were not signed, but the name of John Hancock, president of Congress, was printed on them.

The copies are called broadsides because they are printed on only one side. They were put in saddlebags and sent with riders to the 13 colonies, particularly to their Committees of Safety, so officials could read them on courthouse steps and in town squares, then post them in public.

A competitive Philadelphia newspaper also printed the Declaration on July 6. The first public reading of a broadside in Philadelphia was two days later, and George Washington’s troops heard it read on July 9. (His own copy even made it, partially intact, all the way back to Mount Vernon in Virginia.)

“Congress wanted to make sure there was no fake news,” Konig says. “In fact, there had been a rumor in 1775, when Congress assembled in Philadelphia, that the British fleet had bombarded and destroyed the city of Boston.” That hadn’t happened. What happened was that the Brits had confiscated some arms in Lexington and Concord, outside Boston.

“We’re talking about the mobilization of the democratic electorate.”

Only seven Southwick broadsides are known to survive. Washington University’s copy is one.

‘All men are created equal’

The Southwick broadside is on display in a 68-degree, climate-controlled space with dim lighting. The walls are black, and a security guard sits in the corner by a digital copy of the Declaration.

The digital copy is easier to read, and it is interactive, explaining some of the quirks and words used in the document.

One quirk is the long “s” that looks like an “f.” Used by printers up until roughly the early 1800s, the long s was generally used in the middle of words, some of which had a traditional “s” following the long one.

The letterform did not have the horizontal line in it like an “f.” Still, for modern eyes it looks like “happiness” is spelled “happinefs.”

Meanwhile, Konig says, that word in the phrase “the pursuit of happiness” shouldn’t be assumed to have a modern interpretation.

Happiness in this case meant something like “well-being.” States wanted to pass laws for the well-being of their citizens — not so each individual could pursue his or her own bliss.

Cassie Brand, curator of rare books for the university’s libraries, says that “as with any historical document, it takes some time to get into spelling conventions as well as word meanings.”

Another well-known and discussed phrase in the Declaration’s preamble is Jefferson’s “all men are created equal.”

Critics point to the irony of a man who owned slaves writing this and to the fact that women were not allowed to vote. But Konig says he believes the phrase’s meaning is closer to “all societies of people” are created equal. That is, the society of Americans is equal to the society of British citizens.

Jefferson, in fact, wanted to condemn slavery in the Declaration, but the issue was considered too controversial, and his draft was changed.

The majority of the Declaration, which Konig calls an aspirational document, lists complaints against the king of England, setting out all the reasons that it is necessary for the colonies to declare independence.

Many of the complaints are things people today would recognize, Konig says. Among their requirements, Americans wanted to trade with people overseas, have trials with juries and elect representatives if they were paying taxes.

Brand says that the Southwick broadside was actually the first signed Declaration, with Rhode Island’s secretary of state, Henry Ward, signing it to attest to its legitimacy.

The university’s copy was owned by Eric and Evelyn Newman for six decades, hanging on the wall of their Clayton home.

“He was very proud of it,” says John Hoover, who saw the Southwick broadside in the Newmans’ home. “It’s a very princely gift to Washington University.”

Hoover is executive director of the St. Louis Mercantile Library, which has a July 13, 1776, copy of the Declaration printed in the Philadelphia Ledger. Hoover happened upon the newspaper copy about 28 years ago while sifting through a scrapbook. It is now part of the Mercantile’s “Headlines of History” exhibit, but it will then return to storage.

The Newmans were active philanthropists in St. Louis, with Evelyn Newman involved in starting the Greater St. Louis Book Fair and the ScholarShop. She died in 2015; Eric Newman, a lawyer and coin authority (his collection eventually brought $72 million at auctions), died in 2017.

The Newmans donated not only the historic Declaration of Independence to Washington University, but gave some $10 million to help refurbish its library.

To restore the document, Brand says, a piece of silk overlay was removed, and small holes were filled in and colored. The document was brushed, softly, to remove dirt, then actually submerged in a water and alcohol bath to further clean it.

According to Brand, the Newmans’ document went up for sale for $750 about 1941 from another private owner. Before that, not much information has been available.

Most copies of the 26 known Dunlap broadsides are in libraries and historical societies near the East Coast, with a few in Britain. The collecting world was sent into a tizzy when a copy was actually bought for $4 from a flea market in 1989.

The Dunlap was hidden in a painting’s picture frame. At auction, it sold for $8.1 million.

According to a Harvard website about the various copies, there is “no singular authoritative version of the Declaration of Independence.” Copies can have varying punctuation and spelling.

At declaration.fas.harvard.edu, the introduction admits that “most Americans and many historians consider ‘the’ Declaration of Independence to be the engrossed and signed parchment, on display at the National Archives in Washington, D.C.”

But it’s now incredibly hard to read, and the reading of the words is the most important aspect, the Harvard website says.

Konig believes Solomon Southwick’s broadside is in a good place:

“Jefferson looked to the West for the fulfillment of America’s destiny. Remember, he engineered the Louisiana Purchase. The fact that one copy of his Declaration would find its way to a library west of the Mississippi is probably something he’d be pleased to know.”

5 other artifacts on display at Washington U. library

Blues at the Arch Festival

Fantasy and science fiction novels are usually hit or miss for me, but the two I read for book clubs in July were grand slams.

Author Rinker Buck, now 71, had his flatboat constructed on a Tennessee farm, then floated from about Pittsburgh to New Orleans.

Bestselling books for the week that ended July 31

Neil Gaiman, whose writings of comics, fantasy, horror and myth are known the world over, will be the next recipient of the St. Louis Literary Award.

“A woman wants the same things a man wants,” Trung Trac says early in the novel "Bronze Drum." “Glory in battle, comfort in bed, and the freedom to choose one’s own fate.”

Pushing a stroller while advocating for change: St. Louis author says moms can do both

Juggling motherhood and activism has been part of Cynthia Changyit Levin's family life for 15 years.

Ruth Ware gets into the head of a woman suddenly revisiting the worst time of her life in an involving new psychological thriller, "The It Girl."

“Ivy Lodge” becomes a sometimes painful, always poignant review of experiences that led Linda Murphy Marshall to the writer and translator she is today.

A copy of the Declaration of Independence at the Olin Library at Washington University in St. Louis. (James Byard/WUSTL Photos) 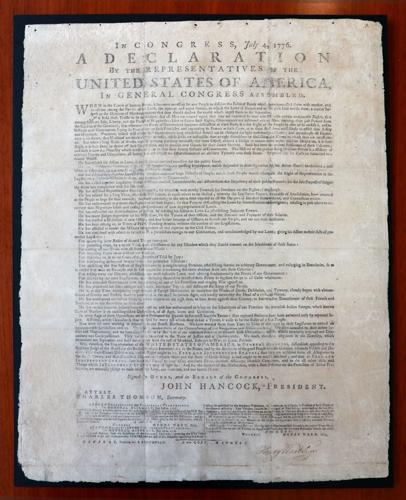 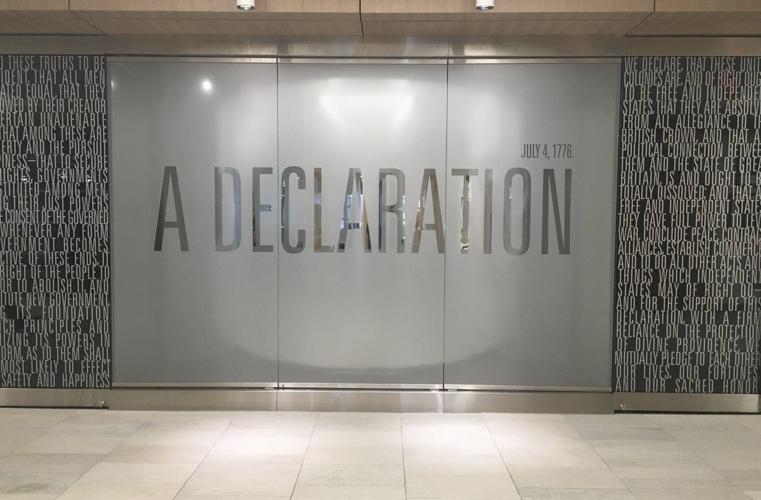 Exterior of room holding Southwick broadside of Declaration of Independence 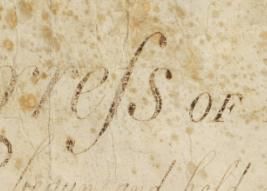 A stretched, long "s" before a short one.