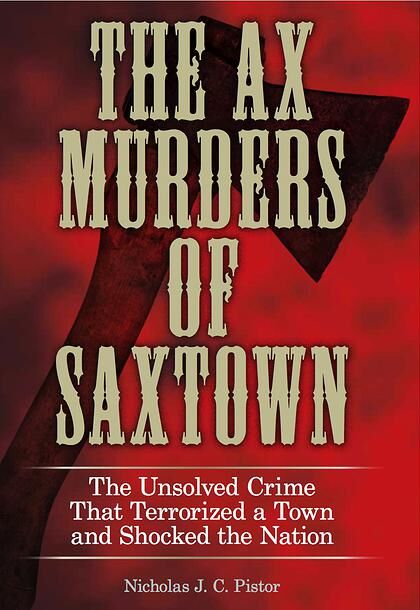 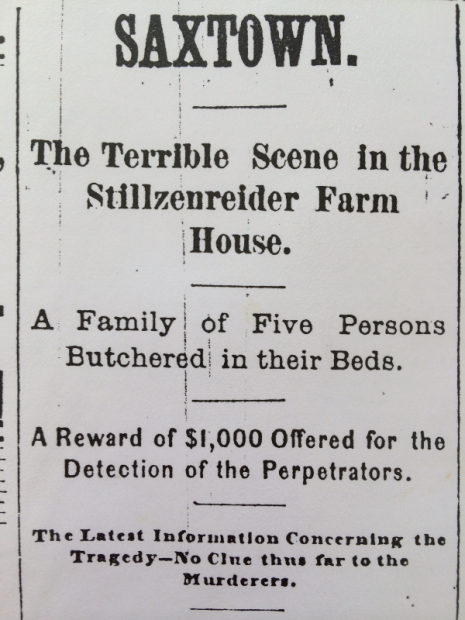 A Post-Dispatch headline March 21, 1874, about the killings in Saxtown. 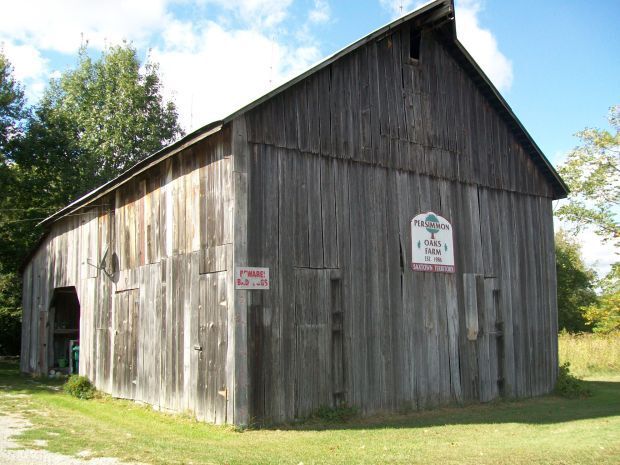 Exterior view of the Stelzriedes’ barn, as seen today in Saxtown. 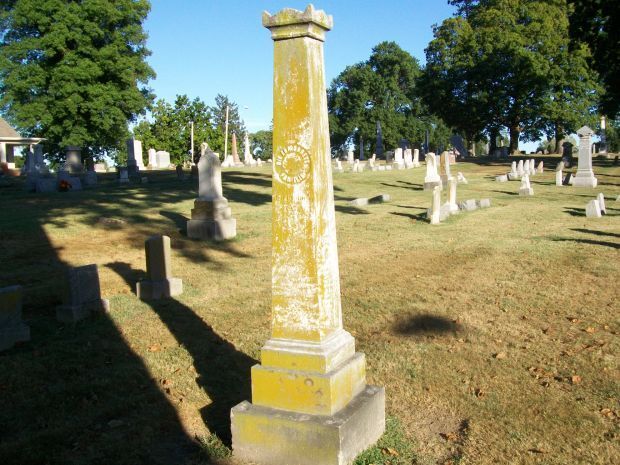 Monument to Stelzriede family at Walnut Hill Cemetery in Belleville. The family's remains are buried eight miles away in Saxtown. (Photo by Nicholas J.C. Pistor.) 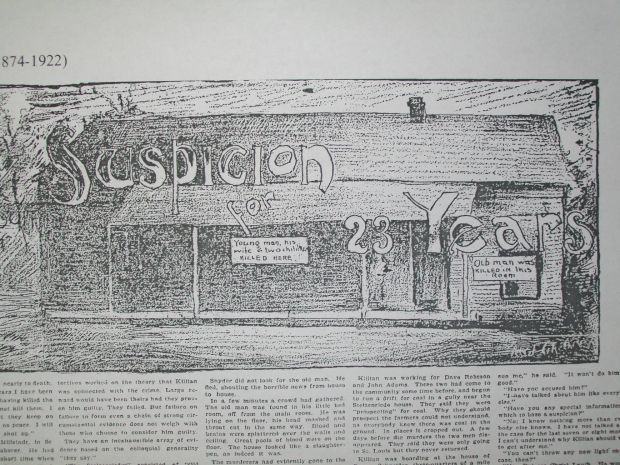 Among the grimmest unsolved crimes of the St. Louis area was the murder of the Stelzriede family in 1874. Three adults and two children were killed in the German immigrant hamlet of Saxtown, a few miles from Belleville.

In “The Ax Murders of Saxtown,” Post-Dispatch reporter Nicholas J.C. Pistor revisits the horrific crime that stunned not just the region, but the nation. He spent almost 10 years researching the case, sending accounts from German-language newspapers to a translator in California. The case was never officially solved, and superstitions haunted neighbors for decades. Many people today, however, know nothing about the Saxtown case, and a memorial to the family doesn’t even mark their actual graves.

Here is an excerpt from the book.

Walking into the cemetery, amid gloomy woods and wheat fields, Joseph R. James was charged with opening the graves, digging up their bones, and moving them eight miles from the small farming community to the sprawling Walnut Hill Cemetery in Belleville, where a stone obelisk had been erected to honor the German immigrant family’s memory. Chiseled into the monument’s surface were the words Zum Andenken am der Ermordete Familie.

In English: “To the memory of the murdered family.”

The memory was frozen in the minds of the Saxtown men who were standing in the cemetery. They could see the Stelzriedes’ horror-stricken faces. See them like it was yesterday.

And they could picture an ax in the hands of a faceless killer, glinting in the moonlight as it approached the Stelzriede cabin.

They had mythologized what happened on the night of the murders. Their minds buzzed with a frightening sequence: The killers approached the small farmhouse and knocked on the front door. Fritz Stelzriede, sleeping on a lounge near the door, asked who was there.

“The answer reassured him,” it was reported. Fritz put on his trousers and opened the door.

With a foot on the threshold, one of the “midnight callers” slammed an ax down on Fritz’s head. But it only staggered him. There was a brief, desperate struggle. He fought for his life. The ax came down twice more. Fritz dropped to the ground.

“His brains were oozing from the three great holes in his head, but to make the work complete his throat was half severed with one sweep of a keen corn knife,” the St. Louis Post-Dispatch reported (in 1897).

The eyes of his wife and children opened. But not fast enough. The ax slammed their heads and the corn knife slashed their throats.

In the next room old man Stelzriede awoke to the commotion and ran out. As he approached through the doorway, a misguided ax swing missed the patriarch’s head and bore into the doorjamb. Another swing missed, too, and took out another hunk of wood. The third swing hit its mark. Square in the head. The corn knife swept across his neck and finished him.

At least that’s how the men imagined it now as Sexton James and his hired hands ambled through the cemetery amid the white tombstones jutting out of the ground, looking for the Stelzriedes’ unmarked resting place.

News of James’s arrival had spread through Saxtown. Fast. The farmers dropped everything and headed to the Freivogel Cemetery. They feared that James was going to try to raise the bodies.

That’s exactly what he intended to do.

James, a grave-digging Englishman, had buried bodies at the Walnut Hill Cemetery in Belleville since 1855. Through the years, he had converted Walnut Hill from a “bramble-grown wood to a well-kept modern park of the dead, with shaded drives and walks and vistas which would be pleasing if they were not dotted with the marble signs of homes bereft and hearts broken.”

He had even lived in the cemetery for a time. Then across the street, looking out at the headstones with flowers and evergreens — but not ghosts.

“I have been through it all hours of the night,” James said. “I have dug graves at midnight by the light of the moon. But I have never seen a ghost or anything that looked like ghosts are supposed to look. There may be such things as ghosts, I can’t say there ain’t, because I don’t know. But if there are any I think they are about as careful as most people are to avoid graveyards at night.”

He continued, “I’ll tell you what I think about ghosts. People who expect to see them and think they see them, do see them — in their minds. It’s all in their imaginations.”

James had buried thousands and thousands of corpses. Or, as he called them, “live ones.” “A live corpse is a fresh one—one buried for the first time, you know,” James once said. “Dead ones are those which are handled a second time.”

In Saxtown, James was looking for dead ones.

He had been asked to dig up dead ones before. Mostly by imaginative mothers who had convinced themselves that their dead children really weren’t dead.

“I say to all of them: ‘If the child was not dead before, it is certainly dead now.’”

“Some have had so strong a feeling that a person had been buried alive that nothing I could say had any effect on them and I have had to open the graves. In no case, however, did I find anything to indicate that consciousness had returned after internment.”

James wasn’t expected to chisel open the Stelzriede coffins to check if the inhabitants were alive. He was expected simply to raise them up, place them on wagons, and take them to his cemetery in Belleville, where a Stelzriede relative had erected the handsome nine-foot-tall monument.

The farmers of Saxtown stood in his way. They believed the removal of the bodies would prevent efforts, which had been ongoing for years, to find the killers. Suspicion being what it was, perhaps the unknown killers stood amongst them.

The crime had hung over the community for too long.

The farmers declared that the bodies should not be removed. And that they would use force to prevent it.

The exhumation was abandoned. James turned around and left without putting the bodies on the back of his wagon. One more attempt was later made to remove the corpses. The farmers prevented it again.

A monument that marks no grave remains in Walnut Hill Cemetery. The Stelzriedes remain in Saxtown. And some say so do their ghosts.

'The Ax Murders of Saxtown'

Tribute to the Cure and Tribute to Radiohead by 120 Minutes

Santa Arrives by Helicopter at The National Museum of Transportation

Songs to get you ready for Thanksgiving

Songs to get you ready for Thanksgiving

Shteyngart's rollicking novel skewers the mores of elites during shutdown

The author seeks to put frontier Kentucky — so wild at the time that buffalo roamed the state — in a larger context of the Revolutionary War.

A Post-Dispatch headline March 21, 1874, about the killings in Saxtown.

Exterior view of the Stelzriedes’ barn, as seen today in Saxtown.

Monument to Stelzriede family at Walnut Hill Cemetery in Belleville. The family's remains are buried eight miles away in Saxtown. (Photo by Nicholas J.C. Pistor.)