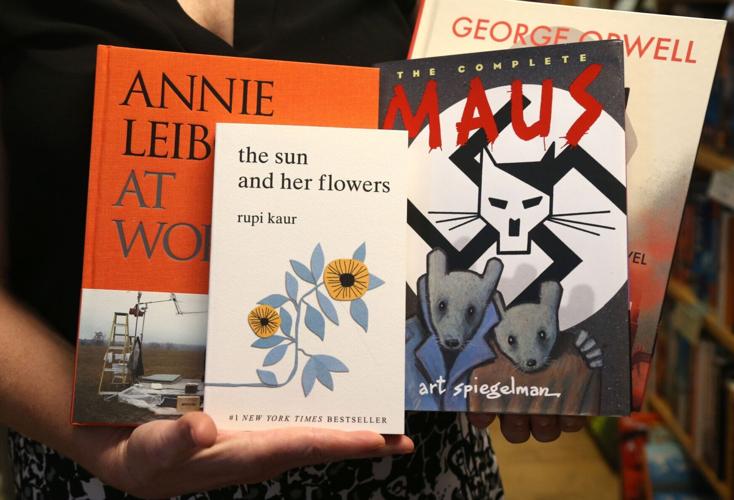 "Annie Leibovitz at Work" by Annie Leibovitz, '"The Sun and Her Flowers" by Rupi Kaur, and "Maus" by Art Spiegelman are among several books St. Louis area school districts have banned as photographed on Wednesday, Oct. 5, 2022, at The Novel Neighbor in Webster Groves. 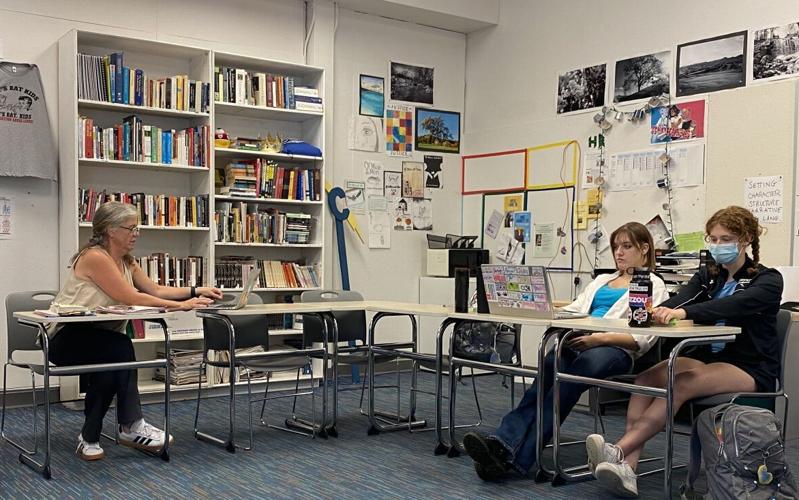 ST. LOUIS — Librarians and authors, including high-profile writers such as Margaret Atwood, Lois Lowry and Art Spiegelman, have signed an open letter to Missouri school districts, newly criticizing them for banning hundreds of books this year.

The letter, written by the writers’ nonprofit PEN America and posted this week, has a growing list of signers blasting the removal of titles including art history texts such as “Leonardo and the Last Supper” and graphic novels that reprise classics such as “The Giver” and “The Handmaid’s Tale.”

“Even amid an avalanche of book bans this fall, the removals in Missouri stand out,” Jonathan Friedman, director of free expression and education programs at PEN America, said in a news release. “These districts — and likely others — have deputized themselves censors, sweeping up in a dragnet all manner of educational materials often with little documented justification.”

PEN America, a 100-year-old New York-based organization devoted to protecting writers’ free expression, counts about 300 books banned from 11 Missouri school districts as of Nov. 15, and acknowledges that there are likely far more. The Post-Dispatch identified almost 100 books barred this fall by school districts just in the St. Louis area, and the PEN figures do not include some of those districts.

The removals this year are in response to fears regarding a new state law, SB 775, that threatens misdemeanor charges against any school official “providing explicit sexual material to a student.” The law allows exceptions for books in which explicit images are educational or have artistic and literary value. Some of the books PEN lists were pulled from school shelves for “review.”

“These districts seemingly sought to purge any potentially offending visual material to avoid running afoul of the new law,” Friedman said in the release. “In so doing, they have cast aside the rights of students to read and learn, as well as the fundamental mission of public education and school libraries.”

PEN’s letter had been signed by almost 30 authors and librarians by Wednesday. Atwood, author of “The Handmaid’s Tale,” Lowry, who wrote the middle school classic “The Giver,” and Spiegelman, the cartoonist behind the graphic novel “Maus,” joined other notable names including Neil Gaiman, author of the comic book series “The Sandman,” and Laurie Halse Anderson, who wrote the young adult novel “Speak,” among others.

Some local libraries are pushing back, too: This week, the St. Charles City-County Library sent a message to patrons urging them to provide feedback on a new administrative rule proposed by Secretary of State Jay Ashcroft, which threatens to pull funding if library officials do not “institute measures to protect minors from non-age-appropriate materials.”

Like schools, public librarians already have standards and ways to group materials by age, and procedures in place for visitors to challenge materials.

“The St. Charles City-County Library, like all public libraries, was founded on the notion that all citizens should have free and equal access to materials regardless of their origin, age, background, or views,” the library wrote in its note to residents. “No citizen should be able to decide for another what is appropriate for them. In the case of children, we too believe that decision should rest solely with their parents or guardians. We also believe that parents or guardians are the ones who must be responsible for that oversight, not the Library.”

Library officials called the new rule a “politicized action to address a purported problem that is not widespread in day-to-day public library operation.”

Letters should be sent to:

• Or, via email, to comments@sos.mo.gov

Ashcroft’s office responded late Thursday saying, first, that not all libraries have policies in place to handle such discussions, and, second, that the rule is not about book banning at all.

"Secretary Ashcroft believes libraries are vital to their community and should represent the overall standards and values of that community," spokesman JoDonn Chaney said in an email. "We encourage everyone interested in this to read the rule and then make an informed comment to our office."

Wentzville School Board bans another library book for sexual content

The American Civil Liberties Union said the proposal is unconstitutional.

"Annie Leibovitz at Work" by Annie Leibovitz, '"The Sun and Her Flowers" by Rupi Kaur, and "Maus" by Art Spiegelman are among several books St. Louis area school districts have banned as photographed on Wednesday, Oct. 5, 2022, at The Novel Neighbor in Webster Groves.