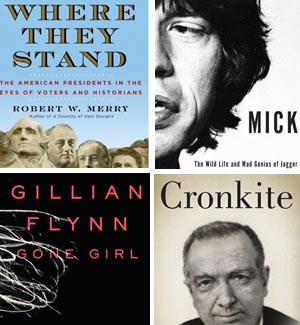 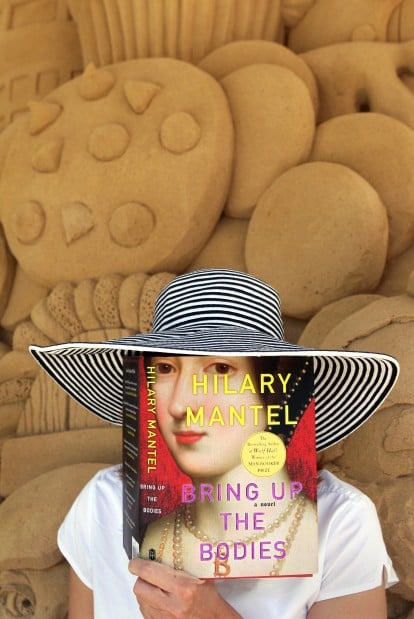 Summer reading isn't only for easy beach titles. Photographed Wednesday, May 23, 2012, at the Magic House in Kirkwood. Photo illustration by Robert Cohen, rcohen@post-dispatch.com

Books about politics pick up the pace this summer in anticipation of the fall election. But there are also traditional page turners — and even a recent title or two that combine fiction with political intrigue.

While Mantel's "Bring Up the Bodies" imagines political games played by Henry VIII's court, James Mann will take a look at the real-life White House in "The Obamians." (Whatever Mann finds, it's sure to be a less bloodthirsty group than the Tudors.)

Other authors urge action on the economy (Chris Hedges), switch from nonfiction to fiction (Peter Heller) or mark the anniversary of Marilyn Monroe's death (Lois Banner).

Here are some of the recent and upcoming books for summer, alphabetized by author's last name. Descriptions are based on publishers' information, wire services and Publishers Weekly magazine.

"Canada" by Richard Ford is the master's first novel in six years, a coming-of-age tale of a boy whose hapless parents are jailed for bank robbery.

Also • "In the Kingdom of Men" by Kim Barnes, "Deadlocked" by Charlaine Harris, "In One Person" by John Irving and "The Lola Quartet" by Emily St. John Mandel.

"Cronkite" by Douglas Brinkley, which goes on sale Tuesday, examines the life of America's trusted newsman.

"The Passage of Power" by Robert A. Caro delivers another dramatic account after decades of research into Lyndon B. Johnson. This, Caro's fourth volume, takes Johnson from his nomination as JFK's running mate through the assassination and 1964 civil rights legislation.

"Our Divided Political Heart" by E.J. Dionne says the true American spirit is a balance between rugged individualism and devotion to community.

"Predator Nation" by Charles H. Ferguson hammers home the indictment of the financial industry and government failure that he also addressed in the documentary "Inside Job."

"Notes on a Century" by Bernard Lewis is a memoir by the esteemed Middle East historian.

"It Worked for Me" by Colin Powell illustrates with personal stories the general's "thirteen rules" for life and leadership.

"The Ocean of Life" by Callum Roberts explores the history of the world's oceans and the recent changes humans have caused.

Also • "Private Empire" by Steve Coll, "The Amateur" by Edward Klein, "The Art of Intelligence" by Henry A. Crumpton, "American Grown" by Michelle Obama and "America the Philosophical" by Carlin Romano.

"Equal of the Sun" by Anita Amirrezvani is set in 16th century Iran and shows that women then, like Queen Elizabeth did in England, could have influence in bloody power struggles. Inspired by the life of Princess Pari Khan Khanoom.

"XO" by Jeffery Deaver puts a pop movie star in danger from a stalker.

"Wicked Business" by Janet Evanovich is the newest in the popular author's series about a Salem, Mass., baker who deals with occurrences more magical than rising dough.

"Girl Gone" by Gillian Flynn may be one of the hottest suspense offerings of the summer, a thriller about a missing wife and her suspicious, golden boy husband.

"Heading Out to Wonderful" by Robert Goolrick is set in a Virginia town visited by a charismatic war veteran in 1948. By the author of "A Reliable Wife."

"The Risk Agent" by Ridley Pearson is a new suspense series by the St. Louis author, who sets this novel in far-away Shanghai, where his family lived for a year.

"The Chaperone" by Laura Moriarty follows young Louise Brooks and her guardian to New York as the daring young girl and future silent movie star takes a dance workshop.

"The Age of Miracles" by Karen Thompson Walker is a promising debut novel in which a California girl copes with her first love and other standard coming-of-age issues. But all is set against a fantastic, doomsday premise that involves a slowdown of the Earth's rotation.

"Beautiful Ruins" by Jess Walter divides its story between a mysterious starlet at a run-down Italian hotel in 1962 and a modern-day studio lot in Hollywood.

Also • "The Cottage at Glass Beach" by Heather Barbieri, "Search and Destroy" by Tom Clancy, "Another Piece of My Heart" by Jane Green, "Summer People" by Elin Hilderbrand, "The Red House" by Mark Haddon, "Mission to Paris" by Alan Furst, "The Bay of Foxes" by Sheila Kohler, "Seating Arrangements" by Maggie Shipstead, "Amped" by Daniel H. Wilson and "The Orphanmaster" by Jean Zimmerman.

"Diamond in the Rough" by Shawn Colvin is a memoir by the Grammy-winning musician.

"Days of Destruction, Days of Revolt" by Chris Hedges and Joe Sacco examine Camden, N.J., the poorest city in the country, and warn about the future if there remains a deep underclass.

"The Mansion of Happiness" by Jill Lepore attempts nothing less than a "history of life and death."

"The Great Destroyer" by David Limbaugh says President Barack Obama is spending us into oblivion.

"The Obamians" by James Mann looks at "the struggle inside the White House to redefine American power," as its subtitle says. By the author of "The Rise of the Vulcans."

"Barack Obama: The Story" by David Maraniss is a multigenerational biography of the president by a Pulitzer Prize-winning journalist.

"Where They Stand" by Robert W. Merry looks at U.S. presidents in the in the eyes of voters and historians.

"New Ways to Kill Your Mother" by Colm Tóibín is the catchy title for a collection of essays about writers, their work and their families.

"Superman" by Larry Tye recounts the "high-flying history" of the comic book hero.

Also • "It's the Middle Class, Stupid" by James Carville and Stan Greenberg, "As Texas Goes…" by Gail Collins, "Zoobiquity" by Barbara Natterson-Horowitz and Kathryn Bowers, "Rock 'n' Roll Myths" by Gary Graff and Daniel Durchholz and "Marilyn and Me" by Lawrence Schiller.

"The Impeachment of Abraham Lincoln" by Stephen L. Carter offers an alternate history by imagining that Lincoln survived the assassination attempt.

"Gold" by Chris Cleave brings the author of "Little Bee" to St. Louis to talk about his new novel, a story of two friends who are Olympic speed cyclists at the 2012 London games.

"Where We Belong" by Emily Giffin promises to be another blockbuster beach read about family relationships. The book by the author of "Something Borrowed" involves an adoptee who looks for her birth mother.

"Shadow of Night" by Deborah Harkness follows a reluctant witch and her vampire husband as they move to Elizabethan England. A follow-up to the popular "A Discovery of Witches."

"The Next Best Thing" by Jennifer Weiner travels to Hollywood with a young screenwriter, who finds a new set of problems after the thrill of having her sitcom accepted.

"The Nightmare" by Lars Kepler brings back Inspector Joona Linna ("The Hypnotist") to figure out what happened to a woman found dead in a boat drifting in the Stockholm archipelago.

"Marilyn: The Passion and the Paradox" by Lois Banner may actually offer new details about the movie star. Banner is a professor of history and gender studies at the University of Southern California.

"The Teavangelicals" by David Brody says the Tea Party is "taking back" America.

"Love Is the Cure" by Elton John gives the famous singer's personal account of his efforts against AIDS.

"Runaway Girl" by Carissa Phelps details her memories of running away, becoming a 12-year-old prostitute and, finally, graduating from law school and vowing to help others.

"Lionel Asbo" by Martin Amis looks on celebrity culture using the story of a boy and his thuggish uncle who wins the lottery.

"The Dog Stars" by Peter Heller, about a pilot who alone survives a deadly flu, is the first novel by the author of several nonfiction adventure books.

"Summer Lies" by Bernhard Schlink is a collection of short stories by the author of "The Reader."

"Thy Neighbor" by Norah Vincent is the writer's debut novel, in which a depressed man starts spying on his neighbors and uncovers some clues about the truth behind his parents' violent deaths.

"Obama's America" by Dinesh D'Souza will be among the anti-Obama titles, which will continue into fall.

"Dearie" by Bob Spitz is a biography of beloved chef Julia Child.

"Phi" by Giulio Tononi is an exploration of "consciousness that uses the latest science framed by imaginative narrative."

Also • "I'd Like to Apologize to Every Teacher I Ever Had" by Tony Danza and "Better Off Without 'Em" by Chuck Thompson.

Find hundreds of things to keep you and your family busy over the coming months with Go! magazine's annual Summer Fun Guide.

HOUR STORY: Building an appetite for reading in Granite City

At a place where silence is typically enforced, about 50 children clapped their hands wildly, flapped their arms like wings and some even sque…

A chapter ends for Betty's Books in rural Jefferson County

Betty Stochl, 81, is closing her store after 35 years.

Who is the prey in new psychological thriller, "The Bay of Foxes"?

Her new protagonist goes to DuBourg and works at Schnucks.

'Shades of Grey' tourism in Seattle and Portland

The Rock Bottom Remainders, the musically challenged band of famous authors, will get together one last time in June.

'Fifty Shades' gives readers something to talk about

Is there a complex psychological reason for the interest in "Fifty Shades of Grey"? Probably not.

"Kiss the Dead" is the 21st novel in the Anita Blake series.

Summer reading isn't only for easy beach titles. Photographed Wednesday, May 23, 2012, at the Magic House in Kirkwood. Photo illustration by Robert Cohen, rcohen@post-dispatch.com