Andy Cohen is one busy guy.

He’s so busy that his latest book, “Superficial: More Adventures From the Andy Cohen Diaries,” which chronicles two years in the life of the media mogul from St. Louis, is completely exhausting — in the best possible way. When does the man sleep?

It’s tough to imagine the stamina required to host both a morning radio show and a late-night talk show, produce the popular “Real Housewives” franchise and other reality series, make (and hear) pitches for new TV shows, travel seemingly nonstop for appearances and speaking gigs, and write three books — two of which have been New York Times best-sellers.

And that’s to say nothing of fancy galas, a huge apartment renovation and no-big-whoop hang-outs with Anderson Cooper, Sarah Jessica Parker, Kelly Ripa, Mark Consuelos, John Mayer, Amy Sedaris, Jon Jay and others from Cohen’s celeb circle. He often doesn’t include last names or explain who the incidental characters are — doing so would make the book twice as long — so it’s helpful to have a working knowledge of his pop-culture pals.

Cohen keeps the tone conversational, appropriate for dishing on the “feud” that blocked a development deal with Wendy Williams, his unintentional insult to Tori Spelling when she suffered burn injuries at a Benihana, his all-caps prison correspondence from New Jersey Housewife Teresa Giudice and his last-minute gig interviewing the cast of “Friends” this year at NBC’s tribute to legendary TV director James Burrows.

The informal diary format, with a mix of long and short entries, makes for a fun read. Cohen is an engaging, humorous storyteller; inserting some paragraph breaks and cleaning up the punctuation, though, would have enhanced the reading experience.

Though Cohen writes frequently about his own friends, his preoccupation in “Superficial” is with finding that special someone — besides Wacha, his beagle-foxhound rescue who is working through issues with aggression and potty-training. (He writes about meeting Wacha’s namesake, Cardinals pitcher Michael Wacha; the dog was the least impressed party.)

Loneliness is a common thread.

“I feel like I’ve had a repressed or delayed early adulthood and never moved on to the next phase,” Cohen writes. “I came out at twenty-one and for the next many years experienced all the sexuality I’d been repressing for so long with little intimacy and certainly no goal line of marriage or kids, which simply didn’t exist in that era. Fifteen years later, I’ve been having too much fun to get off the train when people around me start to settle down and have kids. I have either chosen work or every sparkly object and fun experience that’s been dropped in my path.”

One night with friends aboard a yacht in Indonesia, he discusses his plight with fashion icon Diane Von Furstenberg: “I talked about nights of coming home from the show and feeling lonely — allowing myself to feel that recently for the first time. The dog, I fear, is a Band-Aid. In ten years he will be dead, then I’ll be alone again.”

Cohen candidly describes dates and text-message flirtations. He even befriends a straight couple on one of his tour stops for “The Andy Cohen Diaries,” which leads to some — ahem — exploration of unfamiliar territory.

He also hits it off with a 28-year-old he refers to as #BrazilianAndySamberg. Could this finally be the one?

As on “WWHL,” Cohen’s charming parents, Lou and Evelyn Cohen (of Clayton), figure prominently. Some of the most enjoyable parts are text messages and pearls of wisdom from his mother, including nightly critiques of his talk show. (“Your show has JUMPED THE SHARK,” she texted one night after he and his guests played a game of “guess the crotch.”)

Cohen makes regular visits to St. Louis, so there are plenty of local references, such as reactions to events in Ferguson and to Stan Kroenke packing up his NFL team.

“The Rams’ greedy owner with the bad hair system, Kroenke, announced he’s moving the team back to LA,” he writes. “I called Mom and said I want to give him the finger on air on behalf of St. Louis. She said, ‘I think that’s PERFECTLY APPROPRIATE.’”

While Cohen may sometimes feel lonely, it’s clear from “Superficial” that he is surrounded by love.

How much • Sold out

Tuesday, Nov. 25, 2014 • The voices in my parents’ apartment are so loud, and my mom is sick, with a hacking cough. It’s exhausting and not restful. We got in a huge fight because I was trying to nap from five to six and came out and gave them a warning that their voices were so loud and I couldn’t close my eyes. We were ripping each other apart in the living room — I told my mom I was going to get a hotel, then she was ripping my dad for not eating the food she had made for him and for the “lumberjack shirt” he planned to wear to my event. It was a brutal three-way voice fight. Mom is very anxious for me to sit on her hot toilet seat. Just begging. “PLEASE GET ON THE HOT SEAT!!!!! Jeremy LOVES IT.” She wants to give me one for my new bathroom. I told her I was not sitting on the hot seat. So that hit where it counts. When I got to the event at the Chaminade campus — a thousand sold-out seats! — the first audience question was about what a wonderful relationship I have with my family. I told them all we had been ripping each other’s skin off an hour before.

Tuesday, March 24, 2015 • James Corden premiered last night — he’s got two guests out there at the same time and a bar, which he called “the only bar in late night,” and then they played a game in front of a green screen and as much as I want to get all puffed up and offended, the truth is there is no original idea anymore. We’re all just ripping each other off. Carson was original. And Letterman.

Saturday, March 28, 2015 — Atlanta — St. Louis • Mom and Dad modeled clothes they plan to wear to the amfAR event at which I’m being honored in June; both were their outfits from Em’s wedding ten years ago. I think Dad might need a new tux, but Mom’s knit was just fine. I told Dad I will get him a new tux and Mom said, “Maybe THAT will be his BOX SUIT.” Macabre. To retaliate, I told her — lying — that JLo is presenting me the award and that amfAR wanted her to come up and accept “to be funny,” which sent her into a complete tailspin. “Be FUNNY?! What does that MEAN!? With JLO!? GET ME OUT OF THIS!” I quickly told her I was kidding. She was mad and relieved, not in that order.

Friday, Sept. 25-Sunday, Sept, 27, 2015 — NYC — St. Louis • Did a paid gig at the Young Presidents Organization of St. Louis and a lady was auditioning so hard to be a Housewife. “I live on fifteen acres!” she said. “I entertain for two hundred and fifty people under a tent in my yard! I host Splashercize classes in my pool every morning for all sorts of women! My husband ran for governor!” The interviewer, in front of the two hundred white people (I counted four Jews, which is four more than I expected) asked me what I thought of what happened in Ferguson. I started to go into my soliloquy about white privilege (now I’m preaching about white privilege, when three months ago I had no clue) and all the buildings being boarded up in Clayton and segregation in the suburbs and stuff. Then I read the room, took a breath and punted.

Thursday, Feb. 18, 2016 — NYC—St. Louis—Los Angeles • Stopped in St. Louis in my way to LA to announce to the local media my date with Anderson in October. We’re playing at the Fox, which is four thousand seats, and Robin wants to pull out all the stops to guarantee a sellout. I pushed Robin to book St. Louis because it’s my town, so we better sell it out! … Did the press conference without drinking any tequila and then did a bunch of local radio interviews, including talking to a lady who said she was interviewing me for a local website about pet parents. I felt like Valerie Cherish. The lady from Channel 5 said she wanted to interview Mom for Mother’s Day, and from across the room I heard “NOT INTERESTED!” We were walking out of the theater and when Mom saw all the empty seats she laid it on thick that we weren’t gonna sell out. I said not only would we sell out, we would add a matinee. Mom and Dad have been gloating because my pics of them generate the most likes on my Instagram page, so I posted one of us driving in the car and it wasn’t burning up Instagram. I told Mom if we add a matinee she is doing the Channel 5 thing. She said NO I AM NOT! I said yes you are!

Tuesday, March 8, 2016 • All I do is fight with Trump supporters on Twitter. I cannot stop myself. The man is disgusting me in ways I didn’t know I could be disgusted and the media is playing into his hands. He’s a thin-skinned, flip-flopping orange sham who has manipulated them perfectly. I remember after the Miss Universe pageant one year he offered me a ride home on his plane and I didn’t go because I didn’t want to be beholden to him. I flew commercial instead. I knew then!

One is an esteemed journalist who breaks down the news each night on CNN. The other hosts a late-night talk show and is the king of the “Real … 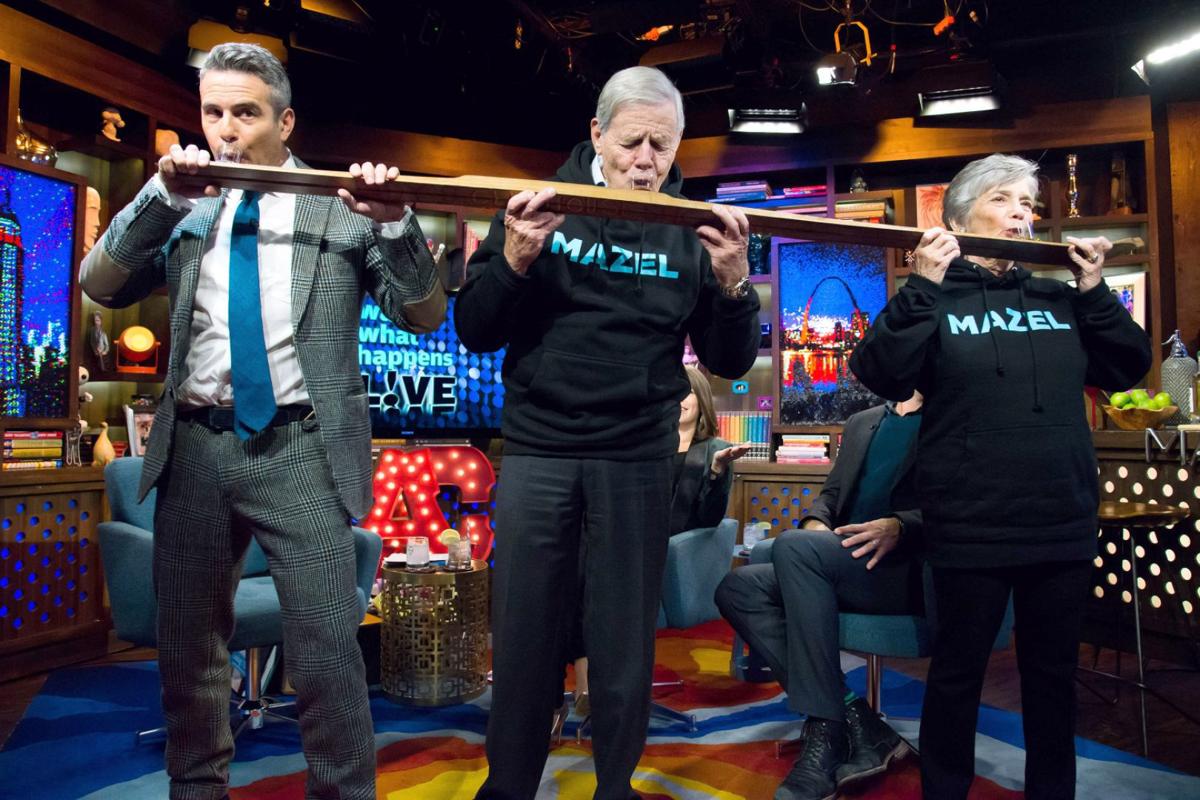 From left: Andy Cohen with his parents, Lou and Evelyn Cohen, on the set of "Watch What Happens Live!" Bravo photo 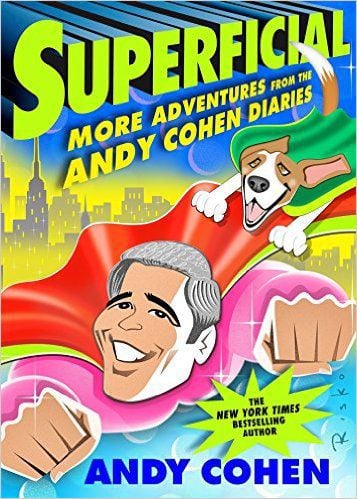 A memoir by Andy Cohen