Reading Barack Obama’s deeply introspective and at times elegiac new presidential memoir, I thought often about something the writer James Baldwin said in 1970, two years removed from the assassination of the Rev. Dr. Martin Luther King Jr. and despairing about America from abroad.

“Hope,” an exhausted Baldwin told a reporter from Ebony magazine, “is invented every day.”

Inventing hope has long been the Obama project, from his early days as an organizer through the 2008 campaign, a two-term presidency and now, in retrospect, his intermittent career as a memoirist. Finally free of electoral politics, the former president concedes that the project has gotten harder, that he has struggled at times to find hope — the very thing he personified for so many.

“A Promised Land” often reads like a conversation Obama is having with himself — questioning his ambition, wrestling with whether the sacrifices were worth it, toggling between pride in his administration’s accomplishments and self-doubt over whether he did enough. Written in the Trump era, under an administration bent on repudiating everything he stood for, his elegant prose is freighted with uncertainty about the state of our politics, about whether we can ever reach the titular promised land.

On that central question, he writes glumly in the book’s preface, “the jury’s still out.”

Covering only the first 2½ years of his presidency, this tome — part one of two — isn’t the usual post-presidential legacy-burnishing project. There is a literary grandness, to be sure — references to Hemingway and Yeats and dramatic renderings of moments high and low captured in sometimes Sorkin-esque dialogue. But the triumphs are tempered with brooding reflections about the inevitable limitations of the presidency. In this surprisingly fast-moving volume, the audacity isn’t in the hopefulness but the acknowledgment of its low ebb.

Readers might have a hard time determining whether Obama’s expressions of disappointment reflect his actual feelings at the time or, rather, emotions colored by the hindsight of having seen his legacy deliberately unraveled.

That muddling might be unconscious, but the general omission of Donald Trump seems intentional. Not until page 672 does Obama mention him by name, in a passage on the inane 2011 controversy over his birthplace. Obama only foreshadows Trump’s unlikely ascent by registering his concerns about rising nativism and the tribalism his election seemed to unleash, an implacable opposition party and conservative media increasingly untethered to truth.

Unspooled chronologically, the book’s first 200 pages recapture the headier days of the future president as a young man, highlighted by Obama’s evocative account of his bright-eyed 2004 address to the Democratic National Convention. He relates what it was like to feel the first spark of an electrical charge that would carry him to the White House just four years later.

“There comes a point in the speech where I find my cadence. The crowd quiets rather than roars,” he recalls. “It’s the kind of moment I’d come to recognize in certain magic nights. There’s a physical feeling, a current of emotion that passes back and forth between you and the crowd ... [Y]ou’ve tapped into some collective spirit, a thing we all know and wish for, a sense of connection that overrides our differences and replaces them with a giant swell of possibility — and like all things that matter most, you know the moment is fleeting and that soon the spell will be broken.”

The bulk of the book is about what happened when the spell began to break — about facing something he recalls the Czech writer Vaclav Havel warning him about early in his presidency, the “curse” of having raised his country’s expectations.

Obama took office in January 2009 amid a spiraling economic crisis, his lofty plans for change running smack into the buzzsaw of Washington’s partisan realities. Looking back on his early efforts to involve Republican lawmakers in efforts to pass a $787 billion financial stimulus package and shore up banks and automakers on the edge of collapse, Obama acknowledges his stubborn naivete; he simply “did not want to believe” that his electoral mandate meant nothing to the GOP.

The necessity of using additional billions in taxpayer dollars to bail out unsavory bankers in order to prevent a deeper economic collapse offered an early lesson, Obama writes: “Sometimes you were just screwed, and the best you could do was have a stiff drink and light up a cigarette.”

Detailing the fevered policy-making of his first two years, Obama draws a textured portrait of himself as a rookie executive — seeking counsel from aides, sneaking cigarettes on the Truman Balcony, frustrated by the constraints on his ambitious agenda but undaunted in pursuing it, even at a steep political cost. His retelling of his administration’s carefully calibrated responses to crises unforeseen — the H1N1 epidemic, the Deepwater Horizon blowout, the Arab Spring — can evoke a strange nostalgia for an era of process-driven policymaking.

His major achievements passed thanks to the Democrats’ legislative majorities, and Obama lauds the courage of vulnerable lawmakers who provided the decisive votes to enact Obamacare knowing it would cost them their seats. “How many of us are tested in that way, asked to risk careers we’ve long dreamed of in the service of some greater good?” he marvels.

Obama’s emotional restraint gives way in moving passages about fatherhood and the loss of his mother and grandmother, and in recalling moments when he seethed, as when a recalcitrant general went rogue in an interview. He lavishes praise on his staffers but is unsparing and funny in depicting some world leaders. Russian President Vladimir Putin’s public projections of a “satirical image of masculine vigor,” he writes, were curated “with the fastidiousness of a teenager on Instagram.”

The narrative puts the reader in the room at defining moments — “I love that woman,” Obama tells an aide after House Speaker Nancy Pelosi assures him she’ll get his health care bill across the finish line — but also in the head of an acutely self-aware individual.

On finding out he’d been awarded the Nobel Peace Prize, he asks, incredulously, “For what?” When a candle-holding crowd gathers outside his hotel window in Oslo before the ceremony, he thinks of the ongoing wars in Iraq and Afghanistan. “The idea that I, or any one person, could bring order to such chaos seemed laughable,” he writes. “On some level, the crowds below were cheering an illusion.”

Nowhere is the heaviness of the presidency clearer than in Obama’s descriptions of deciding to authorize military action, first in Libya as part of a NATO coalition and then in the raid that resulted in the killing of Osama bin Laden, which concludes this volume. The ticktock of the raid’s secret planning and execution is exhilarating, but Obama reflects on the cathartic euphoria of the aftermath.

Reading an email from the daughter of a 9/11 victim after announcing bin Laden’s death to the country, he considered the profound losses of so many, the courage of CIA analysts and Navy SEALs involved in the successful raid and the sadly unique swell of national pride and common purpose:

“The fact that we could no longer imagine uniting the country around anything other than thwarting attacks and defeating external enemies, I took as a measure of how far my presidency fell short of what I wanted it to be — and how much work I had left to do.”

Obama’s anguish is leavened, however, by his sense of history and what King called the long arc of the moral universe.

A visit to the former Buchenwald concentration camp with Holocaust survivor Elie Wiesel, along with a D-Day commemoration at Omaha Beach, France, “answered whatever doubts stirred in me” about how individuals can change the world. And in 2007, when Obama was still a candidate, a visit to Selma, Alabama, to mark “Bloody Sunday” similarly fortified him; elders who’d endured bombings, beatings and firehoses connected their journey to his own, casting themselves as “the Moses generation” and leaving it to him, “the Joshua generation ... to take the next steps.”

Four years later, Obama delivered a college commencement speech in Miami, offering his presidency as proof to another generation “that the American idea endures.”

“At about the same age as the graduates were now, I’d seized on that idea and clung to it for dear life,” he writes. “For their sake more than mine, I badly wanted it to be true.” 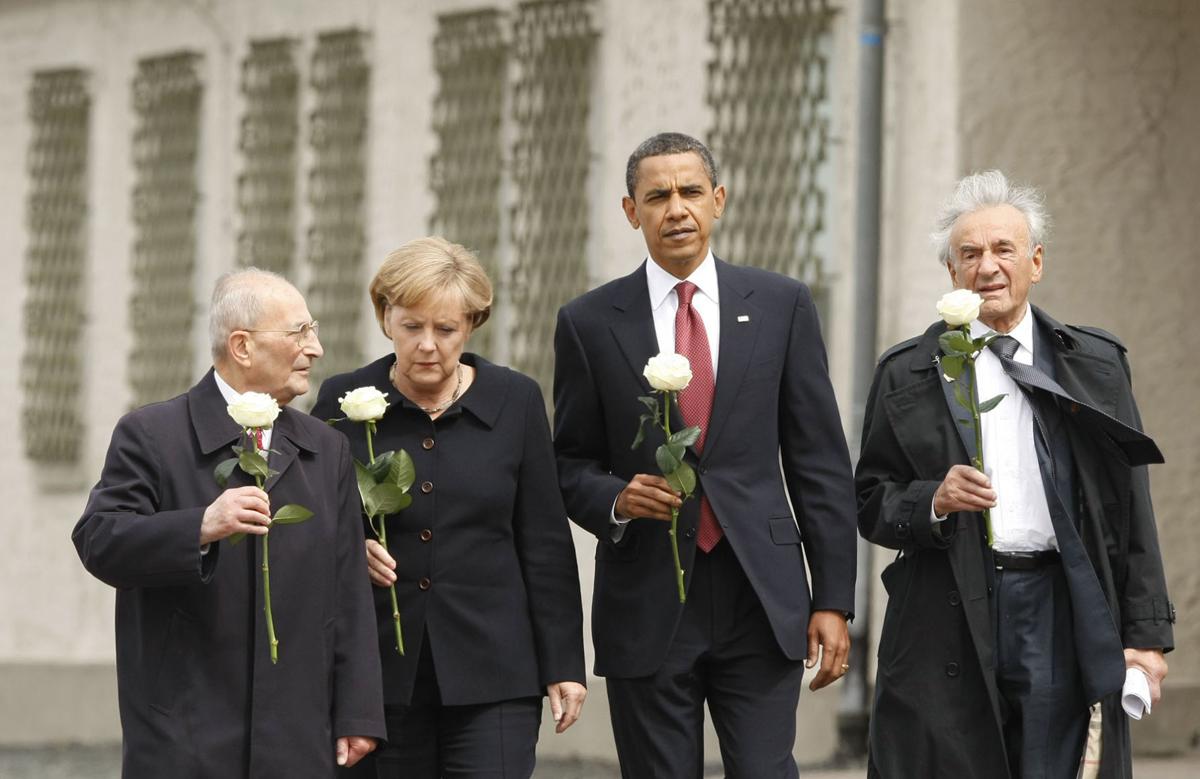 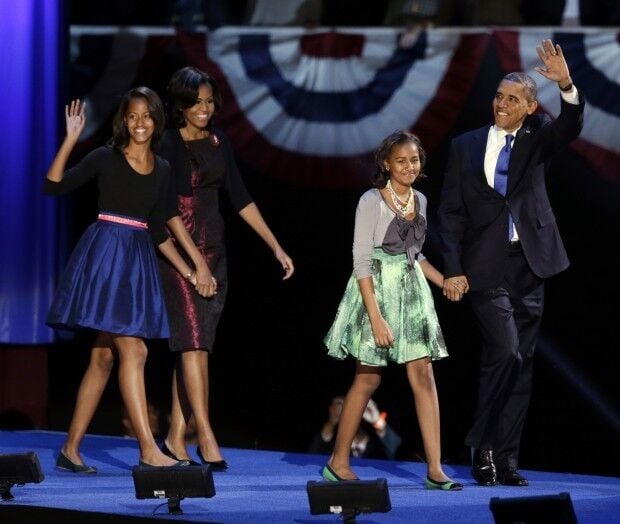 President Barack Obama waves as he walks onstage with first lady Michelle Obama and daughters Malia and Sasha at his election night party Nov. 7, 2012, in Chicago. 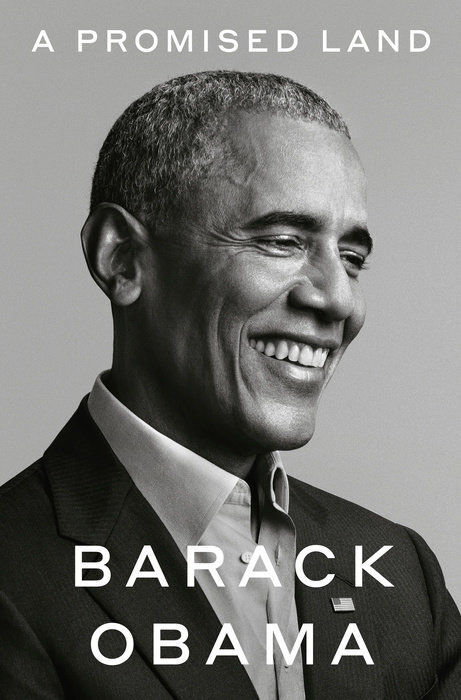