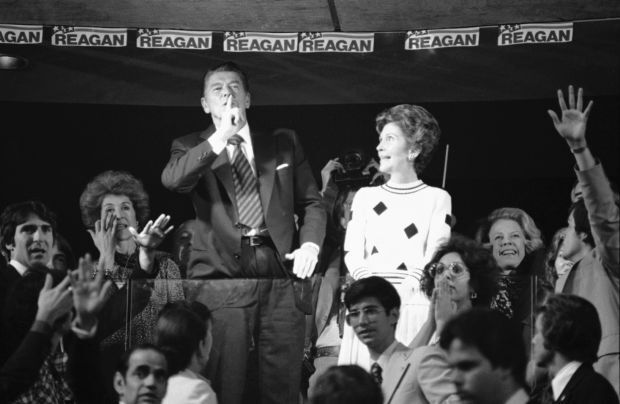 Ronald Reagan places his finger to his mouth as wife Nancy watches at the GOP Convention in Kansas City on Thursday, Aug. 19, 1976. Reagan was trying to stop a demonstration which occurred upon his arrival. (AP Photo) 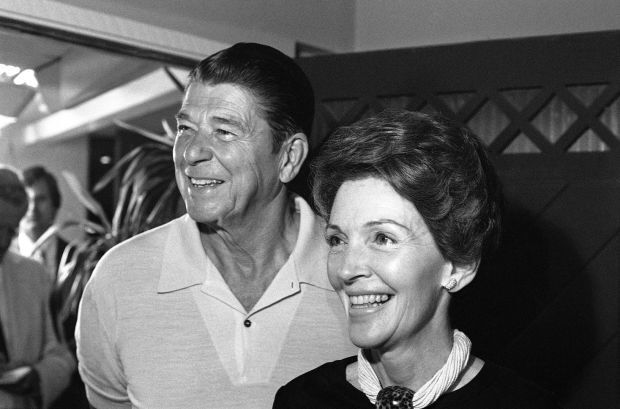 Although political historian Rick Perlstein is a liberal, he often writes his well-received books about conservatives — “Nixonland” and “Before the Storm,” about Barry Goldwater. Now, with “The Invisible Bridge,” Perlstein focuses on Ronald Reagan in the 1970s. Perlstein not only concentrates on conservatives, he seems to respect them, political differences aside.

“The Invisible Bridge” is subtitled “The Fall of Nixon and the Rise of Reagan.” It opens in trauma — the suspicion that North Vietnam had failed to return all American prisoners of war, the Watergate scandal and then the collapse of South Vietnam. At home, inflation flared, sexual morality seemed to disappear and congressional investigations turned up ugly truths about the behavior of the Central Intelligence Agency and the Federal Bureau of Investigation.

The book follows Reagan’s conversion to conservatism while serving as the television face of General Electric. Reagan shot to political fame with a powerful pro-Goldwater television speech in the 1964 campaign.

Two years later, Reagan won the first of two terms as California’s governor — and became a force to reckon with in Republican politics.

Perlstein calls Reagan “an athlete of the imagination, a master at turning complexity and confusion and doubt into simplicity and stout-hearted certainty.” Indeed, the author takes his book’s title from some advice that Soviet ruler Nikita Khrushchev once offered to Nixon: “If the people believe there’s an imaginary river out there, you don’t tell them there’s no river there. You build an imaginary bridge over the imaginary river.”

Mostly, the book focuses on the 1976 contest between Reagan and incumbent Gerald Ford for the Republican presidential nomination. Although Ford eventually won, Perlstein describes him as a sorry politician.

And although Reagan lost — well, we all know what happened four years later when Reagan took on another sorry politician, incumbent Democrat Jimmy Carter.

This book will appeal most to Reagan buffs and political junkies. General readers may find themselves drowning in detail — every press conference, every strategy session, every fund-raising dinner. Those readers may be better served by Jules Witcover’s “Marathon,” published in 1977.

Perlstein’s research was voluminous. He cites the usual sources (The New York Times, The Washington Post) but also quotes from such lesser sheets as the Albany (N.Y.) Times-Record, the Birmingham (Ala.) News — and, yes, the Post-Dispatch. (There has been some controversy over Perlstein’s sourcing, with conservative Craig Shirley claiming the book’s paraphrases are plagiarism. But Perlstein has explained that all notes — including those citing Shirley’s “Reagan’s Revolution” — are not at the end of the book but instead are on his website, rickperlstein.net.)

Perlstein ranges beyond politics to describe to what his publisher calls “America on the verge of a nervous breakdown.” Readers old enough to remember the time will devour long passages devoted to the likes of Patty Hearst ... Hank Aaron ... “Jaws” and “The Exorcist”... Judith Campbell Exner ... “Happy Days” ... Chevy Chase and “Saturday Night Live” ... and much more.

This weighty book ends with Reagan’s loss to Ford in ’76. But given that Reagan bounced back in 1980, Perlstein’s readers can probably look forward to much, much more.

Michael B. Jordan To Rename Rum Brand After Appropriation Claims

Michael B. Jordan To Rename Rum Brand After Appropriation Claims

Ronald Reagan places his finger to his mouth as wife Nancy watches at the GOP Convention in Kansas City on Thursday, Aug. 19, 1976. Reagan was trying to stop a demonstration which occurred upon his arrival. (AP Photo)