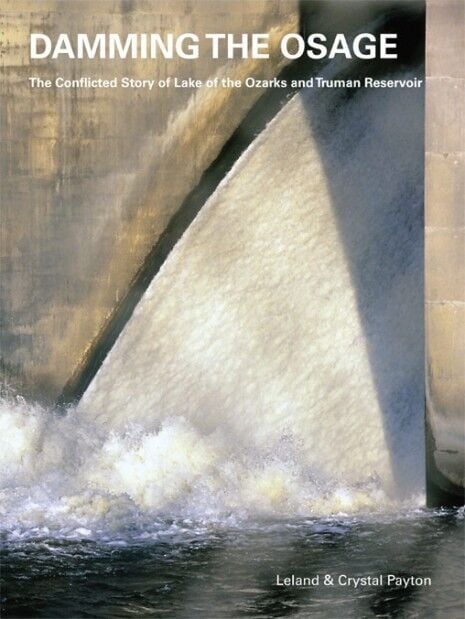 By Steve Wiegenstein Special to the Post-Dispatch

Leland and Crystal Payton, a husband-and-wife writing and photography team from Springfield, Mo., have been chronicling Ozarks subjects since the 1970s. The Paytons’ work features striking photography accompanied by well-researched text, and their latest release received the silver medal for Best Regional Nonfiction (Midwest) at the 2013 Independent Publishers Book Awards.

“Damming the Osage” is perhaps their most ambitious work yet. It seeks to provide a comprehensive, yet personal history of the Osage River from prehistory to the present day. That history, as the title reminds us, includes the building of the Bagnell and Truman dams and the immense changes that took place in the Osage River valley as a result.

The tangled story of the building of Bagnell Dam and the creation of the Lake of the Ozarks — which takes up about 60 pages in the book’s center — is likely to be of greatest interest to most readers, as it tells a story that many lake boosters would just as soon forget or obscure.

The tale of drowned villages, fudged numbers, and over-optimistic developers (one of whom ended up in prison) should serve as a cautionary reminder of what happens when those with “pull” find a quasi-scientific justification for a project.

The Paytons provide extensive research into the early efforts at damming the Osage, which involved a barrel full of pie-eyed promoters who failed, one by one, until the project finally fell into the hands of Union Electric Co. in 1929.

It makes for fascinating reading. The authors document how the public officials and boosters of the area often cooperated and contributed to the demise of their own towns in the name of “improvement,” a magical term that depends greatly on whose land is being made valuable and whose is being submerged.

“Through the hard-time Thirties, the traumatic war-years Forties, and into the early Fifties, utilization of the Lake (of the Ozarks) was spotty and disorganized, but persistent,” they write. “Mom and Pop dreamers built their own businesses from native rock and sold locally crafted souvenirs along with Cokes and Camels. Lake of the Ozarks had evolved its own distinct version of American roadside culture.”

One of the highlights of “Damming the Osage” is its copious illustration. Leland Payton, an accomplished photographer, includes many of his own works. But the book is illustrated even more with a marvelous assortment of historical images, some comical, some whimsical and some heart-wrenchingly sad, of life on the Osage before the coming of today’s massive developments.

Less well known is the story of the other big dam on the Osage, Truman, which had an even more contentious path to creation.

Leland Payton was among the plaintiffs in an unsuccessful Environmental Defense Fund lawsuit that sought to enjoin the dam’s construction to conduct a more thorough environmental impact study, and this section of the book bears the marks of that personal struggle and defeat. Payton’s photographs of the muddy flats of Truman Lake illustrate why it has never attracted the tourist throngs of its downstream neighbor.

Like the Osage itself, this book meanders. Those desiring a more compact, straightforward narrative — a channelized book, so to speak — will be disappointed. But those willing to follow its twists and turns will find, like a river floater, surprises and pleasures around every bend.

Steve Wiegenstein lives in Columbia, Mo. His Ozarks novel “Slant of Light” was the runner-up for the 2012 Langum Prize for American Historical Fiction.

‘Damming the Osage: The Conflicted Story of Lake of the Ozarks and Truman Reservoir’

By Leland and Crystal Payton

'Damming the Osage: The Conflicted Story of Lake of the Ozarks and Truman Reservoir'

By Leland and Crystal Payton

Tribute to the Cure and Tribute to Radiohead by 120 Minutes

Pollution and congestion are just two cited in "The Scars of Project 459."