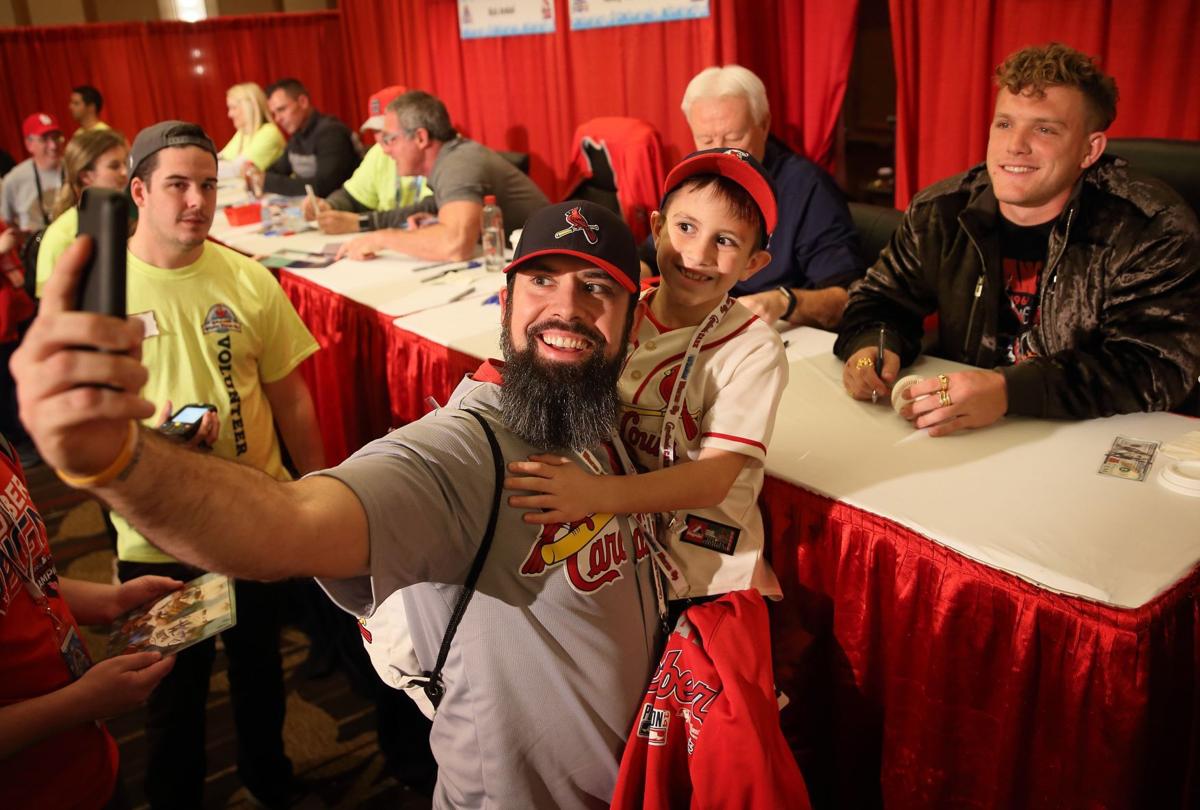 St. Louis Cardinals fans Justin Thompson and his son Jaxon Thompson, 7, grab a selfie with St. Louis Cardinals outfielder Harrison Bader after Bader signed a ball for them during the Cardinals Winter Warm-Up at the Hyatt Regency in St. Louis on Saturday, Jan. 18, 2020. Photo by David Carson, dcarson@post-dispatch.com 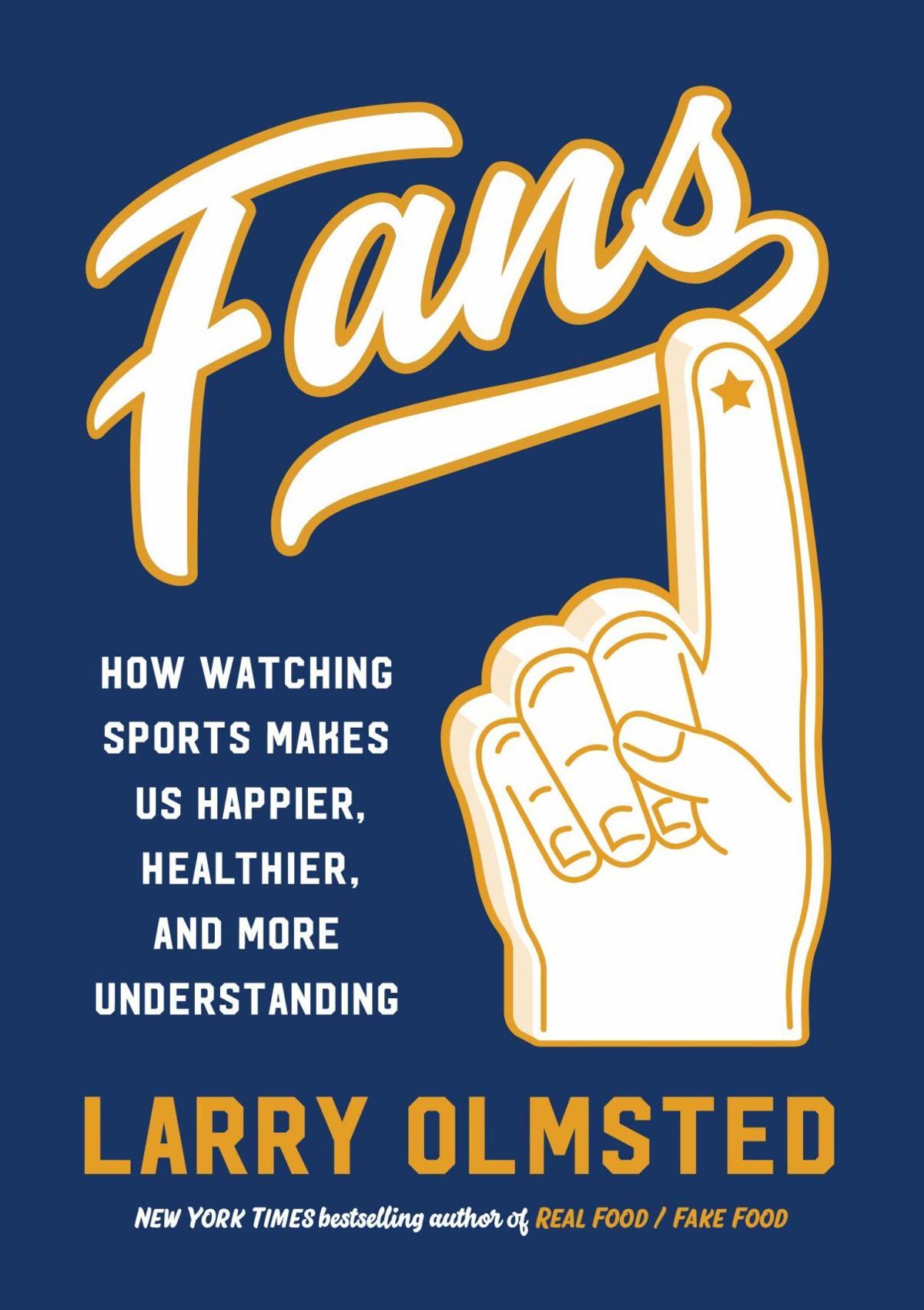 By Dale Singer Special to the Post-Dispatch

When Larry Olmsted was researching this intriguing, wide-ranging look into sports and the fans who follow them, he asked his sources two questions:

Do you consider yourself a sports fan? If so, do you think being a sports fan has made your life better?

Based on the subtitle of “Fans,” Olmsted obviously concluded that the answer is yes. And the book details a wide spectrum of evidence to back up that claim — some parts of it more convincing than others.

For starters, Olmsted makes clear that he isn’t so much interested in why so many people are fanatical about sports. Instead, he wants to know what happens when we care so much. So he quickly dispenses with the common stereotype of the couch potato, decked out in the regalia of his favorite team, remote control in one hand and a supersized bag of salty snacks in the other.

Instead, he seeks out researchers and others who have spent time studying the effects of fandom on individuals. The academic view even includes a Sports Spectator Identification Scale; according to its findings, close identification with a sports team results in two dozen mental benefits, from higher levels of self-esteem, trust in others and satisfaction with social life to lower levels of alienation, loneliness, anger and fatigue.

One of his sources puts it this way:

“Humans are inherently tribal creatures, and this is a way to have a tribe.”

Olmsted’s account proceeds almost like a term paper, liberally quoting the people he meets and studies, with the information presented in a colloquial way that even sports fans who spend little time with books will find easy to digest.

After dealing with sports from a variety of perspectives — as entertainment, as community pride, as an effect on the brain itself — “Fans” veers onto a tangent that doesn’t quite seem to fit with the others. Olmsted spend a lot of the latter part of the book on what could be described as the effect of ping-pong diplomacy: how sports figured in the civil rights movement in United States, the end of apartheid in South Africa, the rise of women’s rights and the ideals listed in the Olympic Charter, among others.

It’s one thing to say that Jesse Owens and Jackie Robinson helped foster harmony between the races, or that the Detroit Tigers’ win over the Cardinals in the 1968 World Series helped that city heal after the long hot summer riots of the year before. It’s another to equate national and international movements with how sports makes individuals happier, healthier and more understanding. Sure, there may be a connection, but Olmsted’s basic premise suffers when it is spread too thin.

Such criticism, though, should not undermine the overall value of “Fans” — documenting the effect of athletic competition on the individuals who follow their teams’ every move. In the end, Olmsted cites what he calls a “truly awe-inspiring” aspect of sports: its “common currency.”

“It erases divides and brings people from all over the world and from every ethnic group and walk of life of together. Some of the most ardently passionate sports fanatics I spoke to while researching this book were teenagers, seniors, professors, cab driver, ambassadors, construction workers, doctors, bartenders, soldiers, students, mayors, governors, and bankers — that is to say they were everyone and anyone, young, old, Black, White, male, female and so on and so on.”

Instead of looking at athletes as role models, he adds, maybe we should be looking at sports fans to fill that role, particularly in these politically polarizing times, because “fans have no less passion, commitment, or emotion when it comes to their beliefs than people do over politics, yet rival fans can argue and debate incessantly, even angrily, and then immediately return to civility and walk away, still friends. Don’t we need this now more than ever?”

St. Louis Cardinals fans Justin Thompson and his son Jaxon Thompson, 7, grab a selfie with St. Louis Cardinals outfielder Harrison Bader after Bader signed a ball for them during the Cardinals Winter Warm-Up at the Hyatt Regency in St. Louis on Saturday, Jan. 18, 2020. Photo by David Carson, dcarson@post-dispatch.com