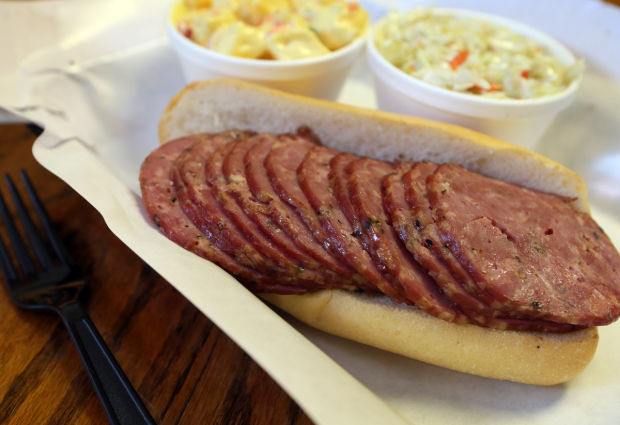 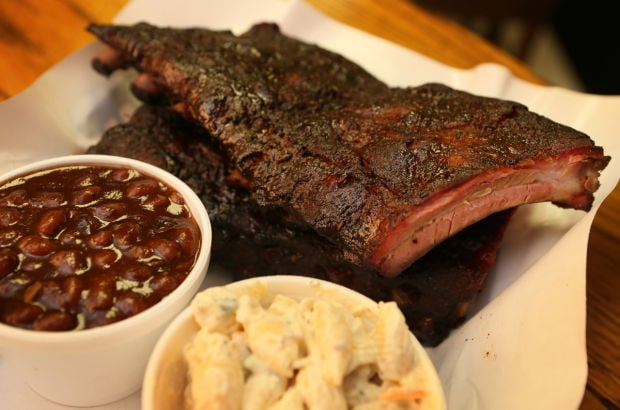 A slab of ribs with pit beans and pasta salad at Adam's Smokehouse in St. Louis. Photo by David Carson, dcarson@post-dispatch.com 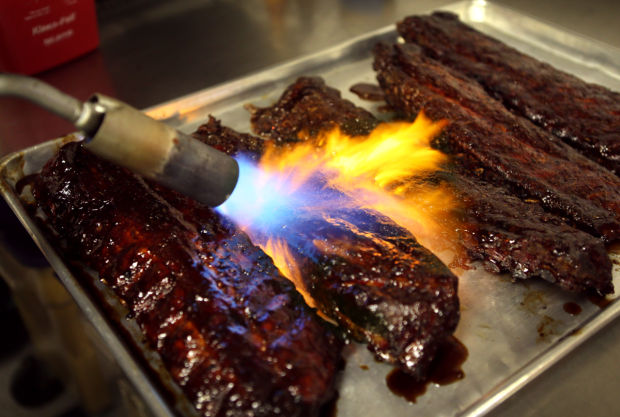 Adam's Smokehouse uses a blow torch to caramelize apple butter on slabs of ribs in the kitchen Dec. 13, 2013. Photo by David Carson, dcarson@post-dispatch.com 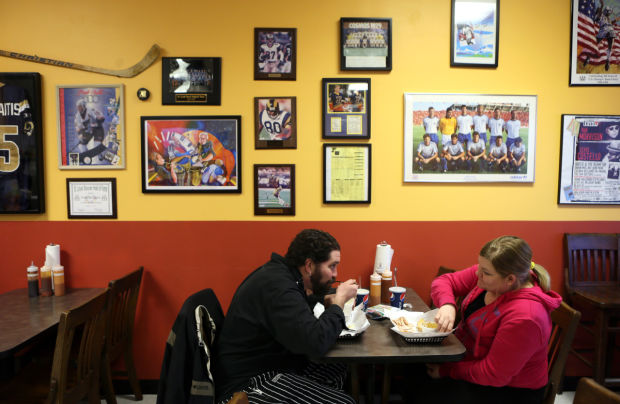 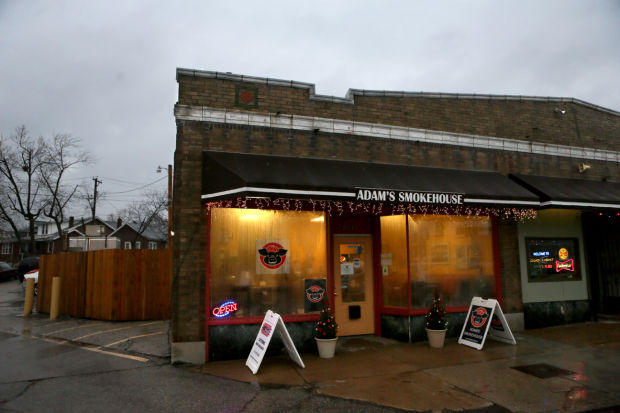 If you’ve ever wondered what it must have been like to eat the Heart Stopping BLT at Crown Candy Kitchen or the Hot Salami at Gioia’s Deli before they became iconic St. Louis dishes, hurry to Adam’s Smokehouse for the smoked salami. Sooner rather than later, the line to order at this new barbecue joint in Clifton Heights will be out the front door and down the block, and the smoked salami will appear on Food Network and Travel Channel.

The salami is everything you could want from a slice of smoked pig: porky (with an additional richness from being one quarter beef and three quarters pork); smoky and salty, of course; and kissed with a peppery secret spice blend. Whether you order the salami as a sandwich ($7.50 for 6 ounces of meat, $9.25 for 8) or a plate ($10.99), it needs no sauce or other adornments. It is — simply, wholly — perfect.

With that introduction, it probably won’t surprise you to learn that Adam’s Smokehouse joins Bogart’s Smokehouse as another strong branch of the Pappy’s Smokehouse family tree. Owners Frank Vinciguerra and Mike Ireland worked together at Pappy’s; Ireland is the son-in-law of Pappy’s co-owner and public face Mike Emerson. The restaurant is named for Adam Gaffney, one of Vinciguerra and Ireland’s fellow Pappy’s employees, who died in 2012 at age 25.

Adam’s Smokehouse occupies a small storefront on Watson Road between Arsenal Street and Hampton Avenue. Seating for about three dozen is crammed into the space. Dining alone? Odds are one of the staff will politely ask if you’d mind sharing your table. Odds also are you and your fellow solo diner will chat about the barbecue you’re eating and how it compares to other spots around town. There are no strangers among ’cue fiends.

The ribs ($13.99 for a half-slab, $21.99 for a full slab) are very good, if not quite as divine as those at Pappy’s and Bogart’s. The meat is tender, with the necessary bite, and the flavor is full of pork and smoke, but I didn’t detect much seasoning from the rub.

Pulled pork ($6.99 or $8.75 sandwich, $10.25 plate) is luscious with rendered fat. My serving contained just enough bits of the browned exterior to provide textural contrast and a deepening of flavor. Smoked turkey breast ($7.50 or $9.25 sandwich, $10.99 plate) is remarkably juicy and conveys strong notes of smoke and salt.

The quality of the beef brisket ($8.95 or $9.95 sandwich, $12.95 plate) depends. On my first visit, the thin slices bore perfect smoke rings but little fat, and the flavor suffered from its lack. On a return visit, the brisket appeared to be from the fattier deckle end, or closer to it at least, and the meat’s flavor was much richer.

Adam’s Smokehouse also offers smoked tri-tip ($10.99 sandwich, $14.99 plate). A muscle from the bottom sirloin, tri-tip is an underrated cut for grilling. As barbecue, the verdict is still out. The flavor is certainly more “steak-like” than brisket’s, but the meat isn’t as fatty and thus not as tender.

(The only meat from the regular menu that I didn’t sample was the chicken, available as either half a bird for $9.99 or the full bird for $15.95.)

Squeeze bottles of three different sauces sit on each table. The Sweet Jane sauce will be familiar to Pappy’s fans. It’s as malty and tangy as it is sweet. The Carolina vinegar sauce is thin and pungent. Cranberry-cayenne is the standout, tart and hot with a hint of fruity sweetness.

Sandwiches and plates both come with your choice of two sides. Bits of burnt ends and a hint of smoke cut the sweetness of the pit beans, my favorite of the options. The cole slaw is more sweet than sharp; the potato salad is mustard-based. The “homestyle” applesauce is chunky but otherwise just applesauce. The chips are Old Vienna brand in a bag.

You’re not here for the sides, of course. Though stellar sides can help elevate a barbecue joint from very good to great. The quality of the barbecue at Adam’s Smokehouse only three months after its opening — especially the otherworldly smoked salami — suggests that it will get there soon enough.

Off the Menu: What you must eat at Adam's Smokehouse

In his video digest this week, restaurant critic Ian Froeb visits the newest branch of the Pappy's family tree.

Order confidently with our restaurant glossary

Don’t be intimidated by menus with unpronounceable terms and mysterious ingredients. Our contemporary restaurant glossary is here to help.

Off the Menu: Juniper does Southern cuisine right

Off the Menu: What was the best restaurant of 2013?

In his video digest this week, restaurant critic Ian Froeb gives his picks for the 10 best new restaurants of the year.

A slab of ribs with pit beans and pasta salad at Adam's Smokehouse in St. Louis. Photo by David Carson, dcarson@post-dispatch.com

Adam's Smokehouse uses a blow torch to caramelize apple butter on slabs of ribs in the kitchen Dec. 13, 2013. Photo by David Carson, dcarson@post-dispatch.com