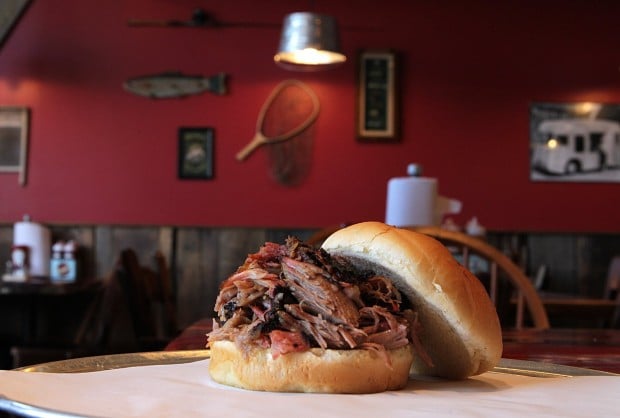 A pulled-pork sandwich at PM BBQ in Chesterfield Valley 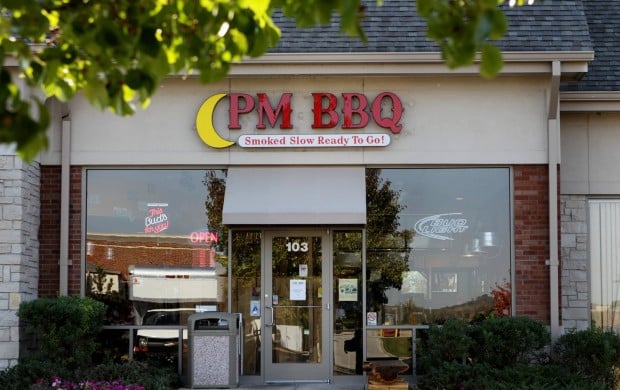 This week, we visit two recent additions to the local barbecue scene.

Paul Lamers and Mark Ruck are the P and M of PM BBQ, tucked into a storefront in the Chesterfield Towne Centre at Long Road and Edison Avenue in the Chesterfield Valley. It's a counter-service place, but our orders came out briskly. What's more, PM follows the "when we're out, we're out" philosophy, which shows a commitment to same-day smoking.

Our order of four meats illustrated PM's versatility. The baby back ribs ($18.95 for a full slab) hit just the right spot on both texture — just a slight bit of give — and smoky flavor. The dry rub on the ribs remained after cooking as a very thin crust and provided just a touch of sweetness.

Sweet, spicy, mustard and Carolina sauces are available on the side. The spicy sauce was relatively tame but had a decent complexity; the mustard sauce was just that. I found the sweet sauce rather nondescript, but I found myself returning frequently to the squeeze jar of Carolina sauce, done in the eastern North Carolina style of vinegar spiked with black pepper and red pepper flakes.

The Carolina sauce was ideal on the pulled pork, which, like the ribs, deftly melded texture and smoke for one of the better versions I've had in town. We heretically ate it as a sandwich ($7.95) with the Carolina sauce but without cole slaw.

The beef brisket in a sandwich ($7.95) was thin but not paper thin, again with just the right resistance in its texture and with a lovely smoke ring. A half chicken ($6.95) was appropriately less smoky than the pork and beef and had a perfect degree of moistness.

Sides ranged from adequate to good, except for the sweet corn spoonbread, an outstanding side starch somewhere between a bread and a mush.

With only about a dozen tables, PM can fill up easily — and, given the quality and range of its pitmasters, it should do so regularly.

Flavors BBQ is a square peg in a round hole: a casual barbecue joint overlaid on the former location of a high-end restaurant (Five, which moved onto the Hill) and trying to compensate by adding 'sports bar and grill" to its identity. This isn't necessarily a bad thing, but Flavors could use a tighter focus than what we experienced.

My first few bites of the spare ribs ($18.50 for a full slab, $10.50 half slab) put Flavors very near the top of my local barbecue hierarchy: remarkably meaty yet tender, with a touch of herbiness combined with a vague kick from its rub. Unfortunately, as I worked my way down to ribs more toward the center of the slab, the moisture level and texture deteriorated. The middle ribs weren't bad — just slightly tougher and drier, traits that were more noticeable after the sublime experience with the end.

A half slab of baby back ribs ($11.50) was OK, but even though baby backs often have a better reputation than spare ribs, their flavor and density at Flavors were outshone by the spare ribs.

The beef brisket dinner ($9.50) was a remarkably large portion, possibly close to half a pound. The slices were about the thickness of sliced raw bacon but managed a fork-cuttable tenderness. There was no discernible smoke ring.

The pork in the pulled pork dinner ($8.50) was flavorful, but its slightly stringy texture was disappointing.

Smothered green beans were the standout among the side dishes we tried, laced with flavor by the addition of smoked turkey.

As I tried to reconcile the initial thrill from the spare ribs with an overall average barbecue experience at Flavors, I was struck by the length of the menu. In addition to standards of ribs, pork, chicken and brisket, Flavors offers smoked turkey, smoked tri-tip, rib tips, smoked chicken wings, a turkey burger, nachos, fried pickles — and then some.

I don't think a barbecue restaurant can have that breadth of menu without steady, high volume, and only a handful of tables were occupied when we visited Flavors once at lunch and once at dinner. There's obviously talent back on the smoker, but it needs to home in on doing just a few dishes consistently well.

The Spice Girls are about to drop new music

The Spice Girls are about to drop new music

Go! magazine has been active on Facebook and Twitter for a while now, but we've recently expanded our efforts to Foursquare, the location-base…

If you go: PM BBQ

Two stars (out of four)

If you go: Flavors BBQ

One star (out of four)

A pulled-pork sandwich at PM BBQ in Chesterfield Valley