2017 was a pretty good year for new restaurants in St. Louis — so good that we said the heck with the traditional Top 10. 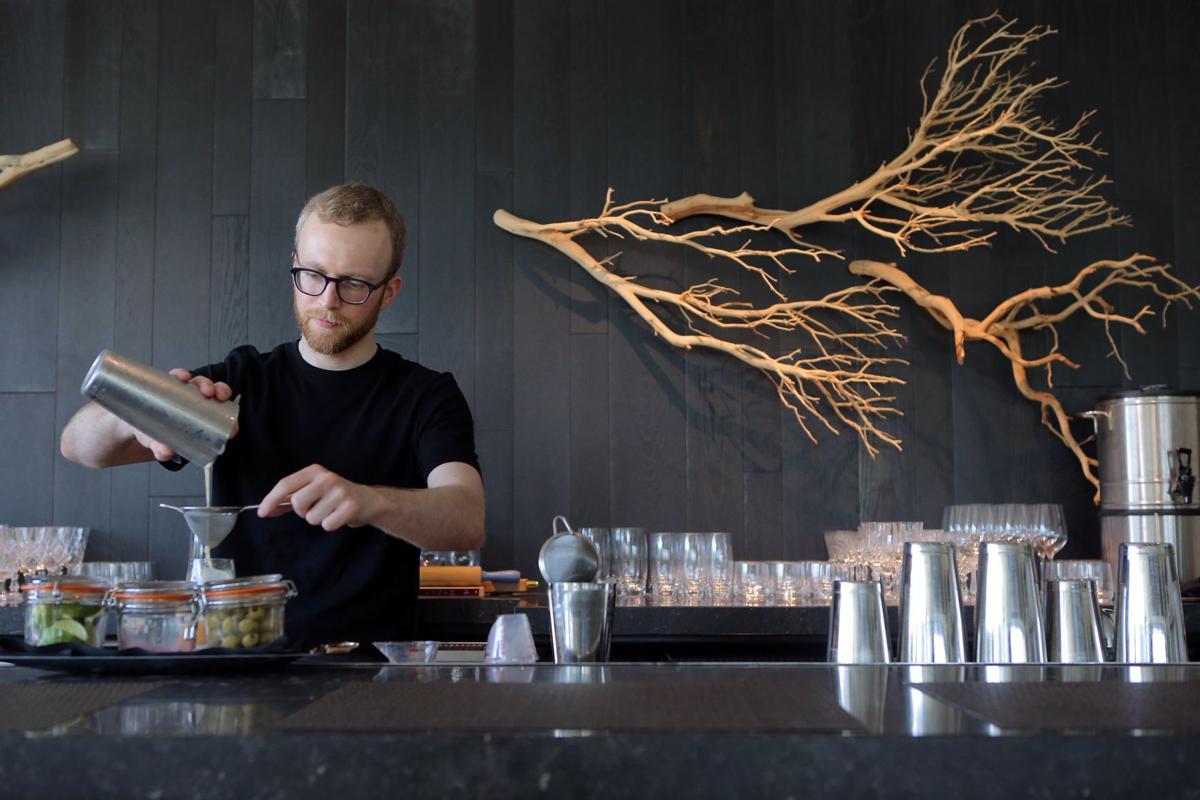 Yeah, 2017 was a pretty good year for new restaurants in St. Louis — so good that I said the heck with the traditional Top 10. Instead, I offer you a lucky baker’s dozen of stellar newcomers. (Is 13 not enough? Check out my list of honorable mentions.)

No trend dominates this year’s list, which covers restaurants that opened from late fall of 2016 through this fall. You’ll find both prominent chefs and first-time restaurateurs, familiar fare and cuisines rarely seen in St. Louis.

And at the summit of the new restaurants I reviewed in 2017, leading the way by the light of its four stars, is ... 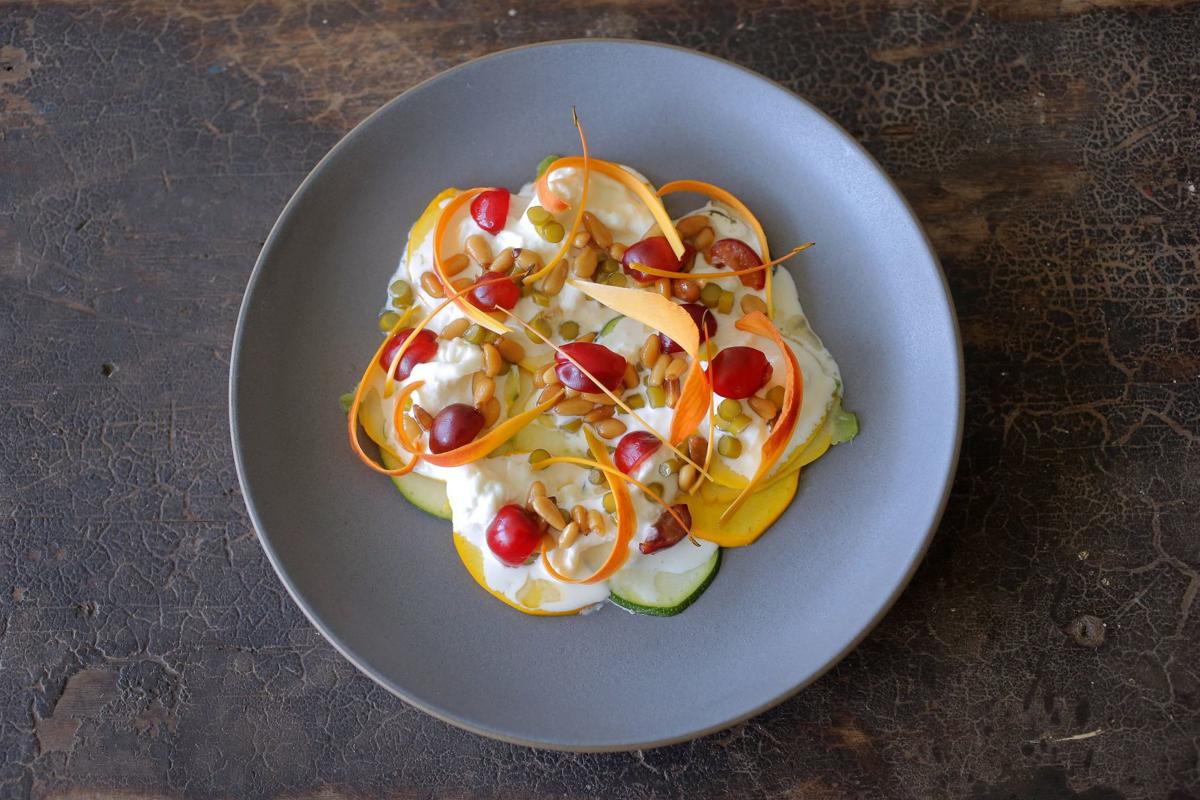 “Eagerly anticipated” barely begins to describe Vicia’s debut in March. Michael and Tara Gallina were the chef de cuisine and a captain, respectively, at Blue Hill at Stone Barns, the Pocantico Hills, N.Y., restaurant (and working farm) regarded as one of the country’s and even the world’s best restaurants. The Gallinas moved to Michael’s native St. Louis in late 2015 to open their first restaurant. The long lead time, the attention from the national food media and a series of pop-up events only compounded the hype.

Vicia lived up to that hype — and then exceeded it.

The Gallinas call Vicia’s food “vegetable-forward.” A better term might be elemental, with dishes that draw on the bounty not merely of the season but of the moment, and often marked by the flames and smoke of the wood-burning oven that is dramatically situated at one end of the restaurant’s patio.

The menu changes too often to recommend specific dishes. I still think about what I ate on my visits there this spring: a lightly scrambled goose egg served in its own shell with asparagus, shiitake mushroom and a smoked-butter foam; charred cabbage funked up with sauerkraut and painted with spalla cruda; a braised beef dish made mind-bendingly light thanks to the infusion of carrots and leek in the braising liquid.

A few weeks after I filed my initial, 3½-star review, Vicia introduced a chef’s tasting menu: more than a dozen small courses for the (relatively!) reasonable price of $85 per person. This is Vicia at full flower, with Gallina showcasing his creativity in focused, pungent, playful bursts: a “cocktail” of roasted-melon juice with a slice of coppa on the rim of the glass; a simple pork rib made ethereal with smoked blackberries; chicken and shiitake mushrooms in a smoked-corn-cob broth like summer’s ripeness distilled. It’s filling but not overwhelming. I didn’t blanch when desserts from all-star pastry chef Summer Wright arrived.

The tasting menu prompted me to elevate Vicia to a four-star rating. It’s a modern four-star restaurant, with service (led by Tara Gallina and assistant general manager Jen Epley) that’s impeccable without being fussy. You can wear jeans here. You can, at lunch, order at the counter and spend under $20. 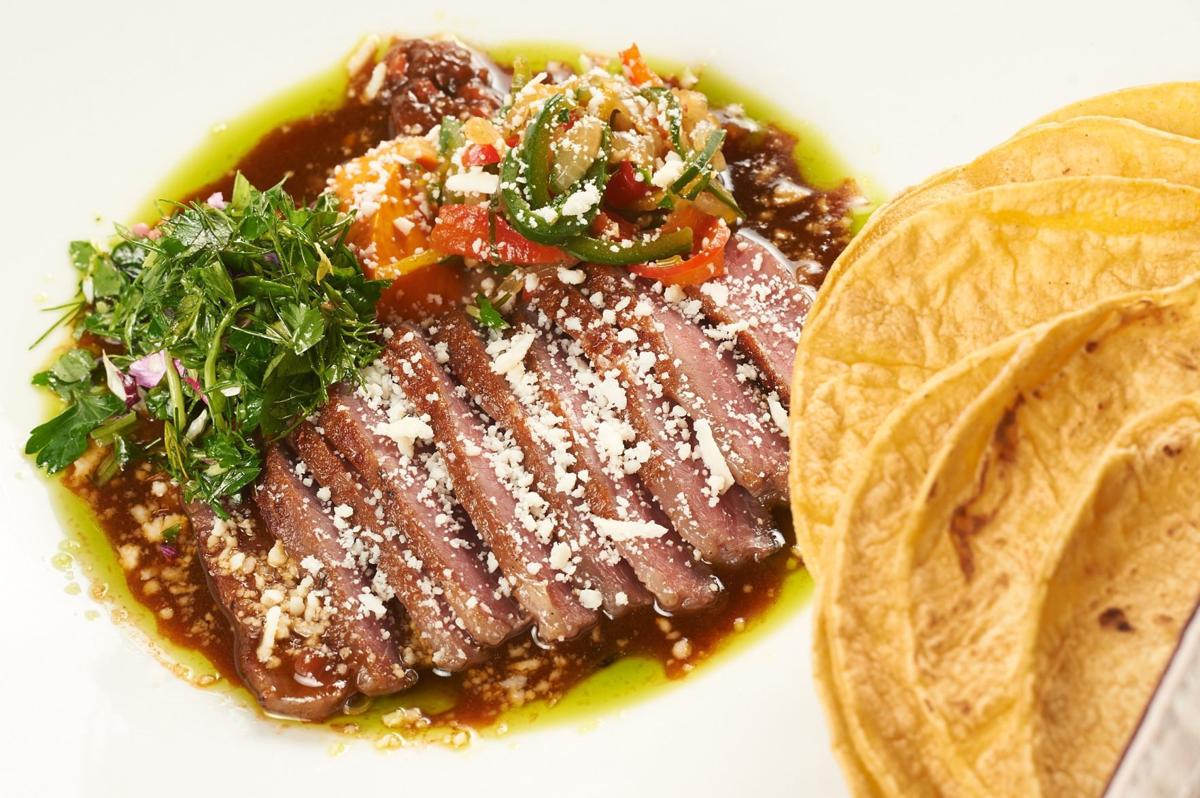 Nixta’s place on this list is both an honor and a time-capsule entry. Chef-restaurateur Ben Poremba opened Nixta in November 2016 with Tello Carreon as executive chef, and the menu brilliantly fused the traditional fare of Carreon’s native Guanajuato, Mexico, with the fine-dining touches you’d expect from Poremba’s flagship Elaia, where Carreon had been chef de cuisine. Here a modern interpretation of the Oaxacan tlayuda or a taco al pastor shared the table with the mole recipe from Carreon’s grandmother and cochinita pibil cooked overnight in a wood-burning oven, and nothing seemed out of place.

Carreon left Nixta in October, however, only two months after Bon Appétit magazine named it one of the 10 best new restaurants in the U.S. Given Poremba’s track record, Nixta should continue to thrive. (I haven’t returned since Carreon’s departure.) But this inaugural year will always stand as a brilliant, soulful concept expertly executed. 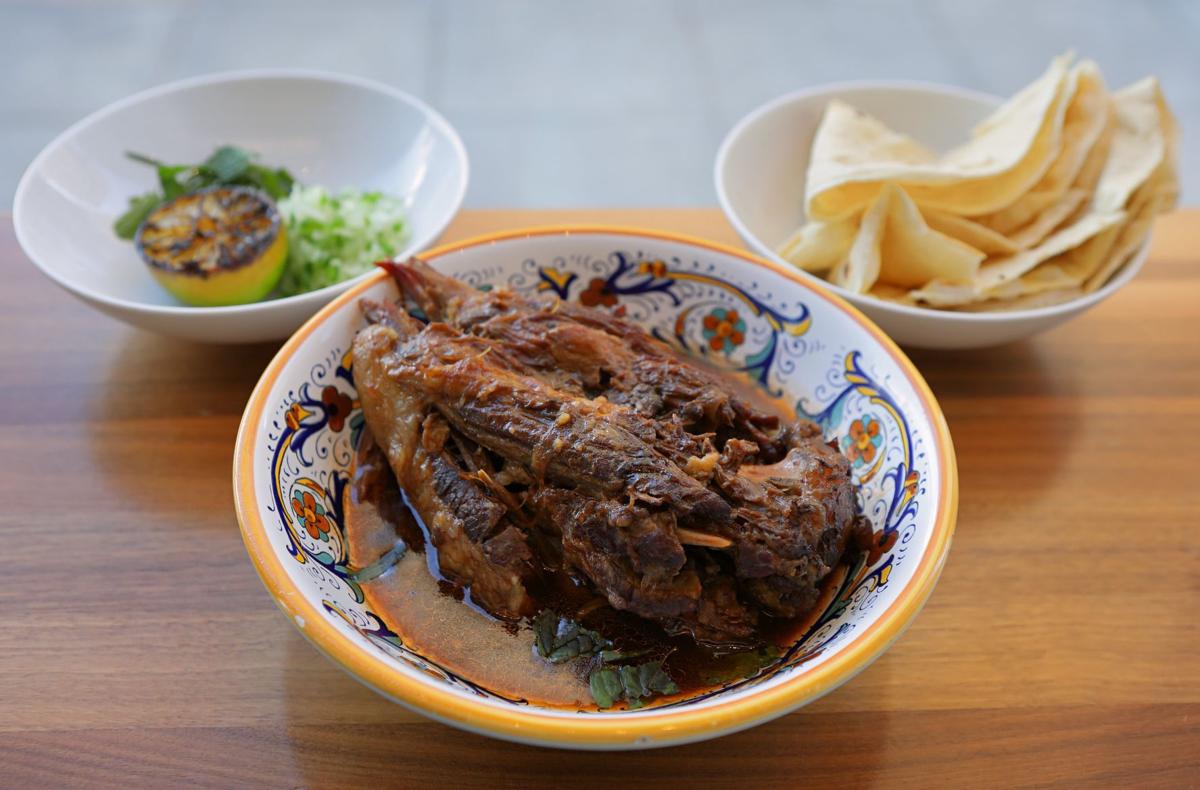 Gerard Craft transformed his flagship restaurant Niche into the lighter, brighter but still excellent Sardella. In place of Niche’s tasting menus and admirably maniacal devotion to locally sourced ingredients, Sardella offers an oft-changing array of vibrant dishes that have traveled from Italy via a lengthy layover in California, with a healthy dose of the kitchen’s whimsy. Many of my favorite dishes from my visits aren’t currently on the menu, but pastas and roasted or braised meats are always a good bet. Sardella opened with Niche vet Nick Blue as executive chef; since April, Pastaria executive chef Ashley Shelton has held the same position at Sardella, further bolstering the work that has won her such accolades as a semifinalist nod for the James Beard Awards’ “Rising Star Chef of the Year.” 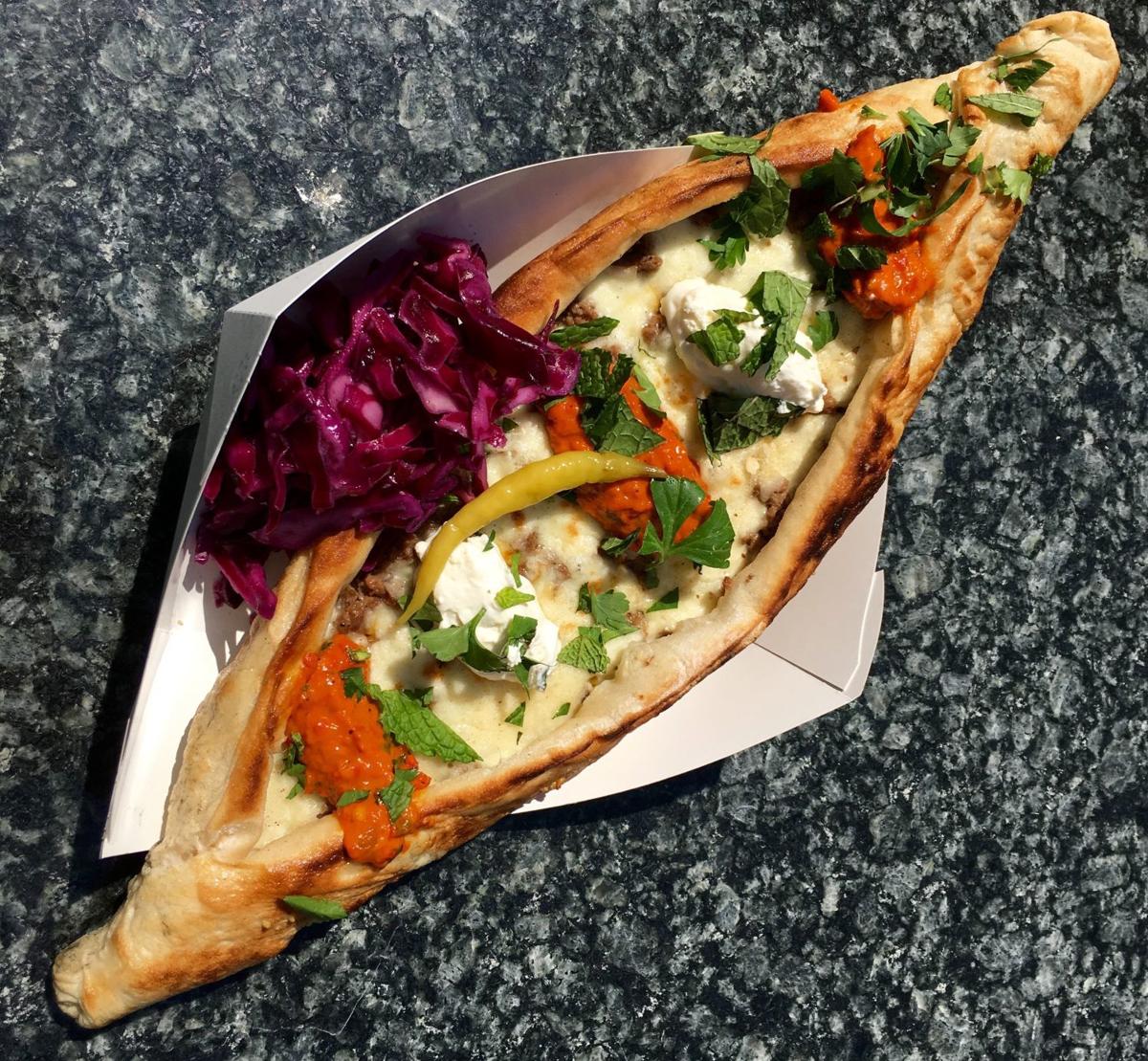 Seoul Taco. Guerrilla Street Food. Frankly Sausages. The food truck that outshines the traditional brick-and-mortar competition is no longer a surprise. To this roster you can now add Balkan Treat Box, which chef-owner Loryn Feliciano-Nalic first announced in 2015 but didn’t roll into regular service until this year. Feliciano-Nalic installed a wood-burning oven in her truck, and in this she bakes the Turkish flatbread called pide (topped with ground beef and piknik cheese) and the somun bread for plump Bosnian cevapi and a juicy chicken döner kebab. That’s essentially the entire menu, but the wood-fired breads are sublime, and those dishes are more than enough to recommend Balkan Treat Box — and to suggest, like the trucks listed above, the concept is bound for even bigger things. 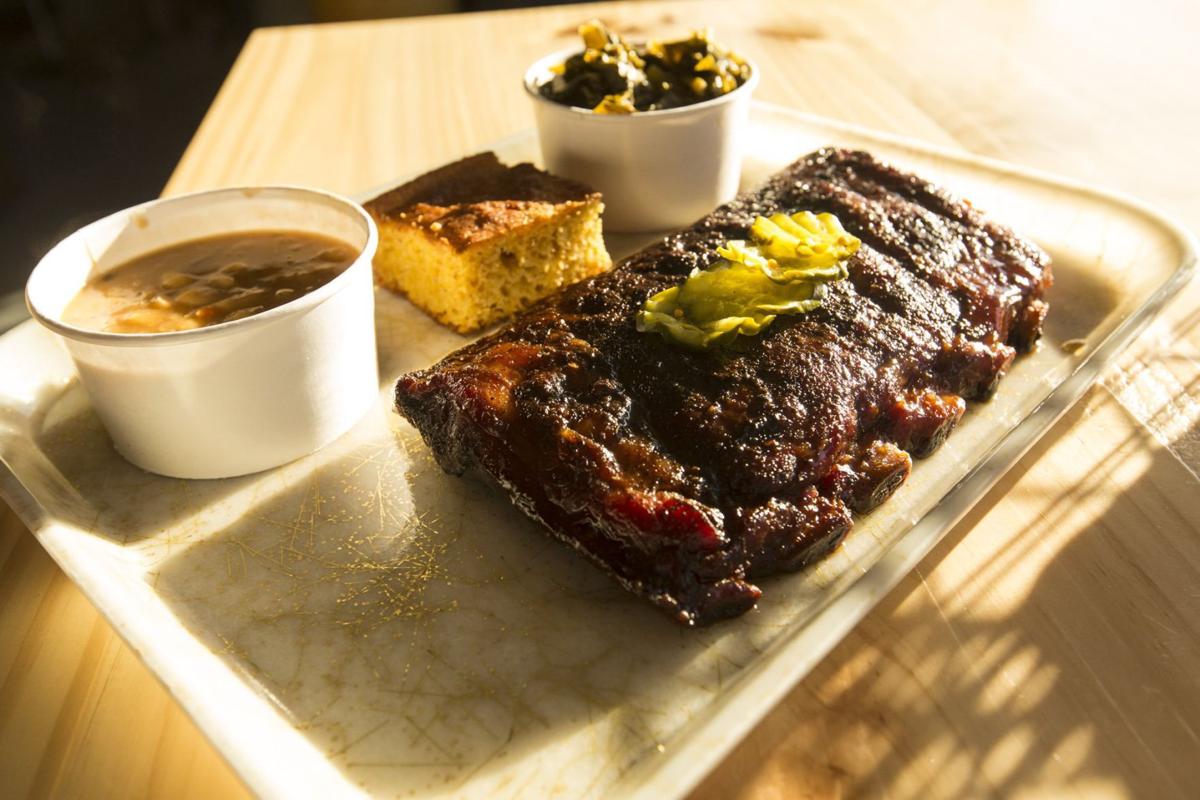 Grace Meat + Three is the best distillation yet of the talent and aesthetic that has won chef Rick Lewis acclaim from myself and others at Quincy Street Bistro and Southern. (Lewis left Southern this year to open Grace with his wife, Elisa.) The fare is familiar — fried chicken and catfish, pork ribs, bologna — and the format is a classic counter-service meat-and-three, but the distinctive details are Lewis’ own, like the shower of crisp leeks and the umami-jacked mushroom and bone-marrow gravy that accent the incredible herb-roasted beef, or the whipped sweet potatoes with bourbon, sorghum and toasted marshmallow that unfolds in layers of sweetness without ever becoming cloying.

(Note: My full review of Grace Meat + Three was delayed when my paternity leave began earlier than expected. Look for it in the coming weeks.) 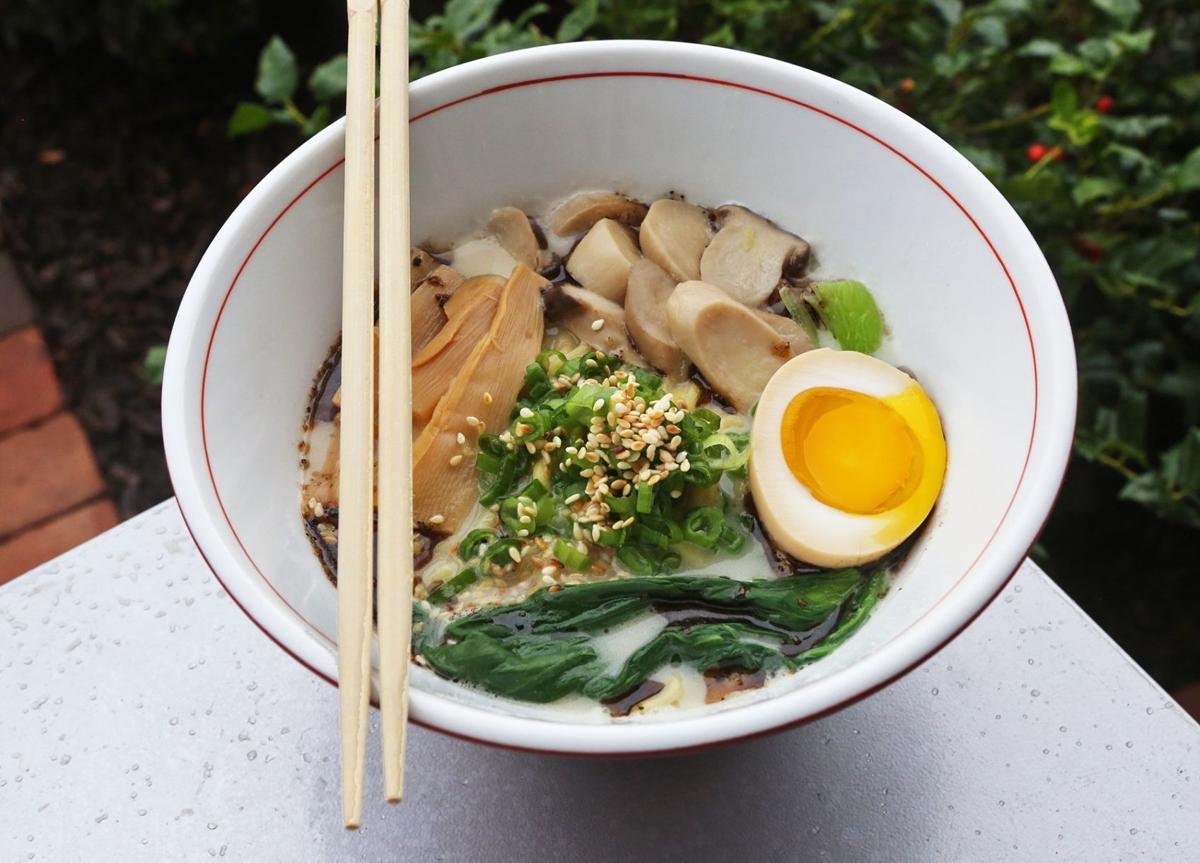 One of the most anticipated restaurants of 2015, 2016 and 2017, Nudo House finally opened its doors this year. The pains chefs and co-owners Qui Tran and Marie-Anne Velasco took during that long gestation are apparent. The ramen broths are exquisite: sticky, porky tonkotsu is the best version in St. Louis of the traditional style, and the chicken-based Hebrew Hammer, laced with black garlic, is nearly as rich. The pho is as excellent as you’d expect from Tran, the son of Mai Lee founder Lee Tran. The whole is far greater than you’d suspect from its unassuming strip-mall, fast-casual storefront. 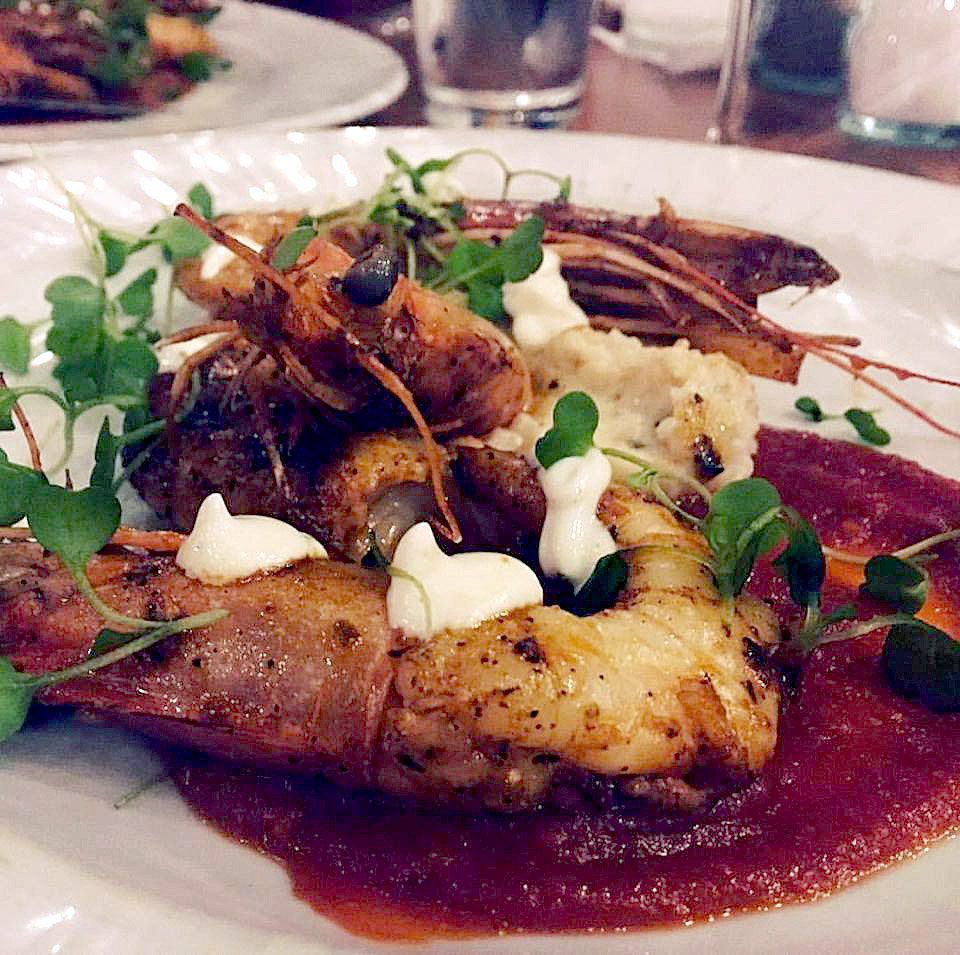 With its prime location near Lafayette Square Park, Polite Society didn’t need to reinvent the wheel. Instead, owners Jonathan Schoen and Brian Schmitz and chef Thomas Futrell (previously of Scape) have created a warm neighborhood bistro distinguished by small touches: chicken wings cooked confit-style before being fried to order; plump, head-on shrimp with grits; a steak with a classy, old-school foyot sauce on the side. Polite Society is an always welcome (and with the closure of spots like J McArthur’s, Three Flags Tavern and Grapeseed, ever rarer) species: an of-the-moment restaurant for grown-ups. 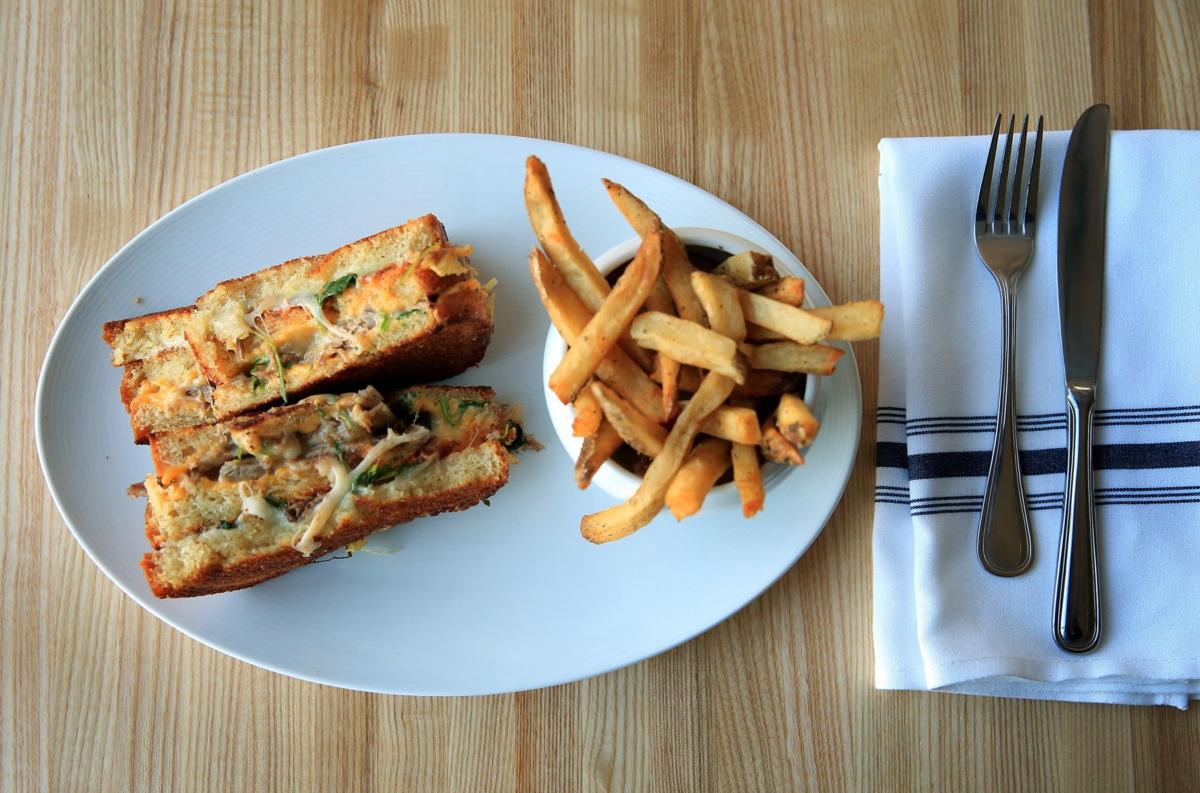 Chef Jessie Gilroy made her bones at Charlie Gitto’s on the Hill, the Tavern Kitchen & Bar and Sidney Street Cafe, and that experience is evident at her debut restaurant. The focused menu draws on international flavors — fried chicken spiked with Jamaican jerk seasoning; roasted potatoes tossed in a Thai red-curry paste — but more straightforward dishes like a classic French onion soup or beef cheeks braised in red wine and veal stock are equally impressive. The location inside St. Charles’ planned New Town community is off most readers’ beaten paths but worth seeking out for this rising chef. 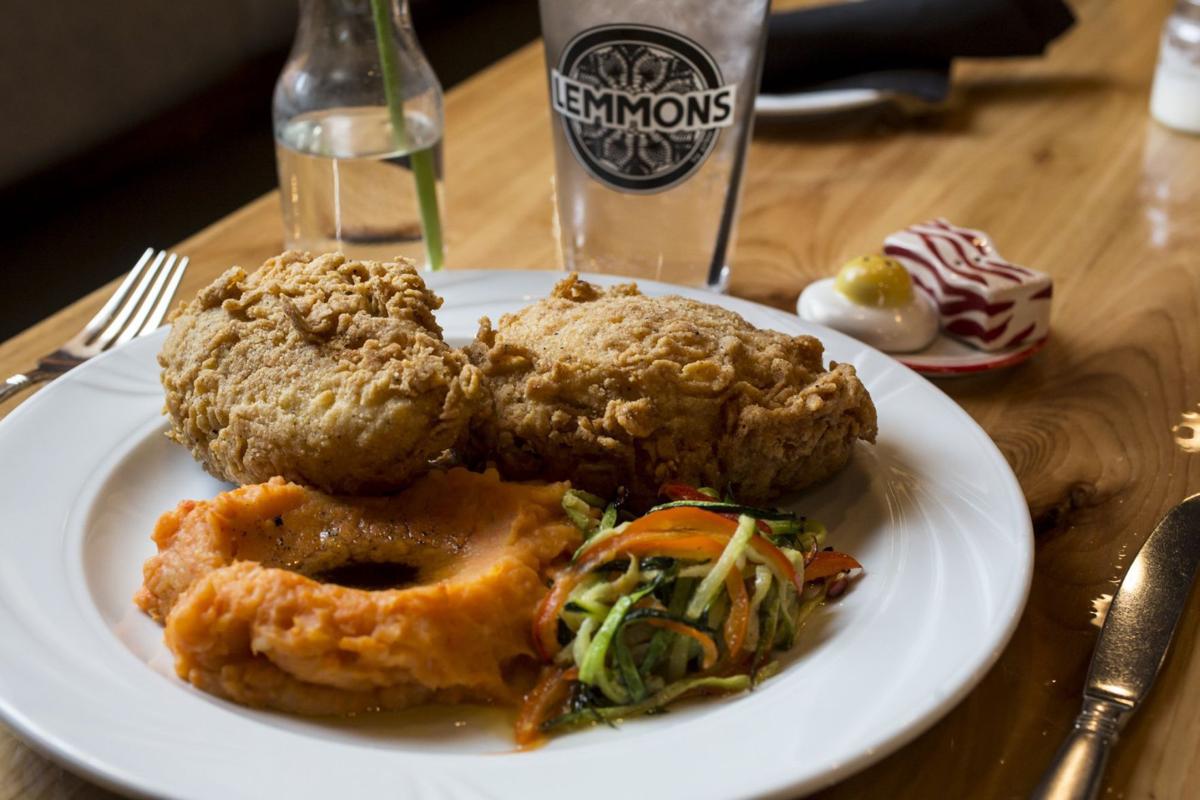 Ermin, Erna and Senada Grbic, the adult children of Grbic Restaurant owners Ermina and Sulejman Grbic, gutted the grungy but beloved south-city tavern Lemmons and turned it into a restaurant brimming with potential — and reasons to eat there now. Executive chef Senada draws on her Bosnian heritage and American upbringing for such standout dishes as the applewood-smoked, rakija-laced and chile-charged chicken wings and a flatbread topped with cevapi and mozzarella. Be sure to order the ustipci, airy fried-dough balls with feta butter, mushroom duxelles and the tangy relish called ajvar for dipping. 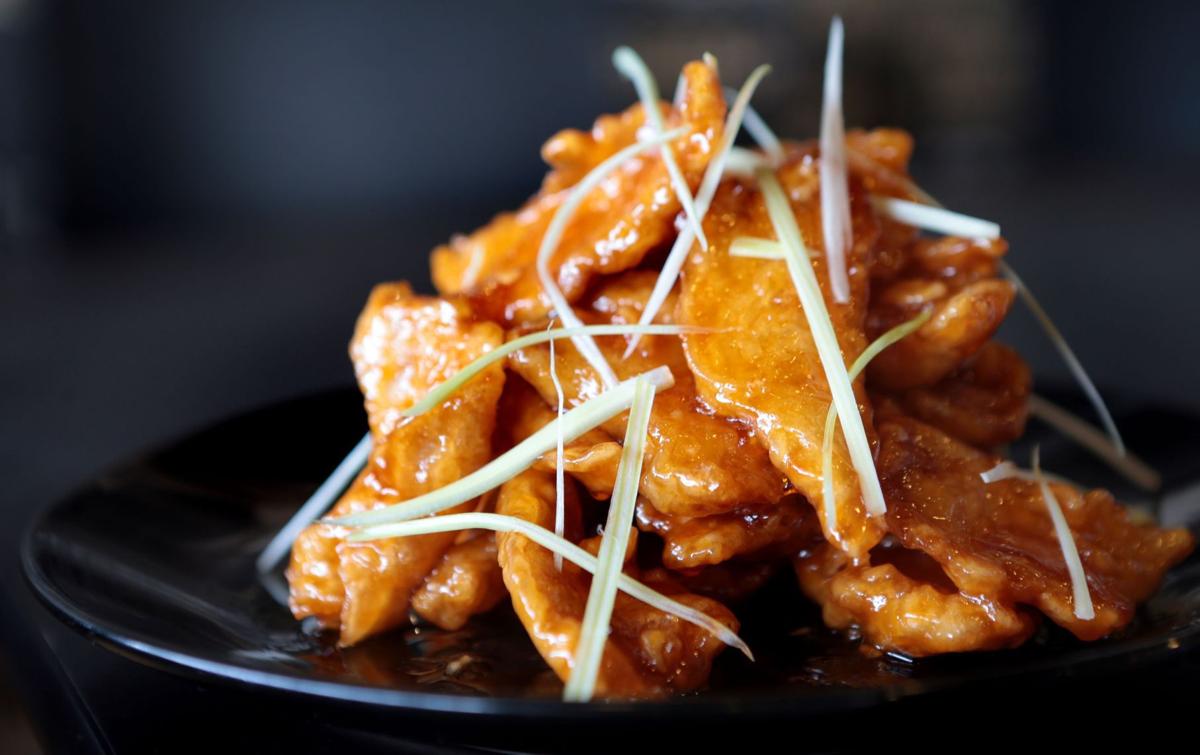 Regional Chinese restaurants in St. Louis continue to grow in number and variety. Daniel Ma and Quincy Lin’s Cate Zone Chinese Cafe focuses on hearty Dongbei fare from China’s northeast. First-time visitors should begin with the sweet-and-sour pork. Fried very crisp, pungent with ginger and only fleetingly sweet, it’s a revelation compared to the cavity-inducing Americanized version of the dish. Soups — steak, enoki mushrooms and bok choy in a light-bodied but rich beef broth; pork belly and tripe with glass noodles and cabbage in a puckeringly sour broth — are also a highlight. 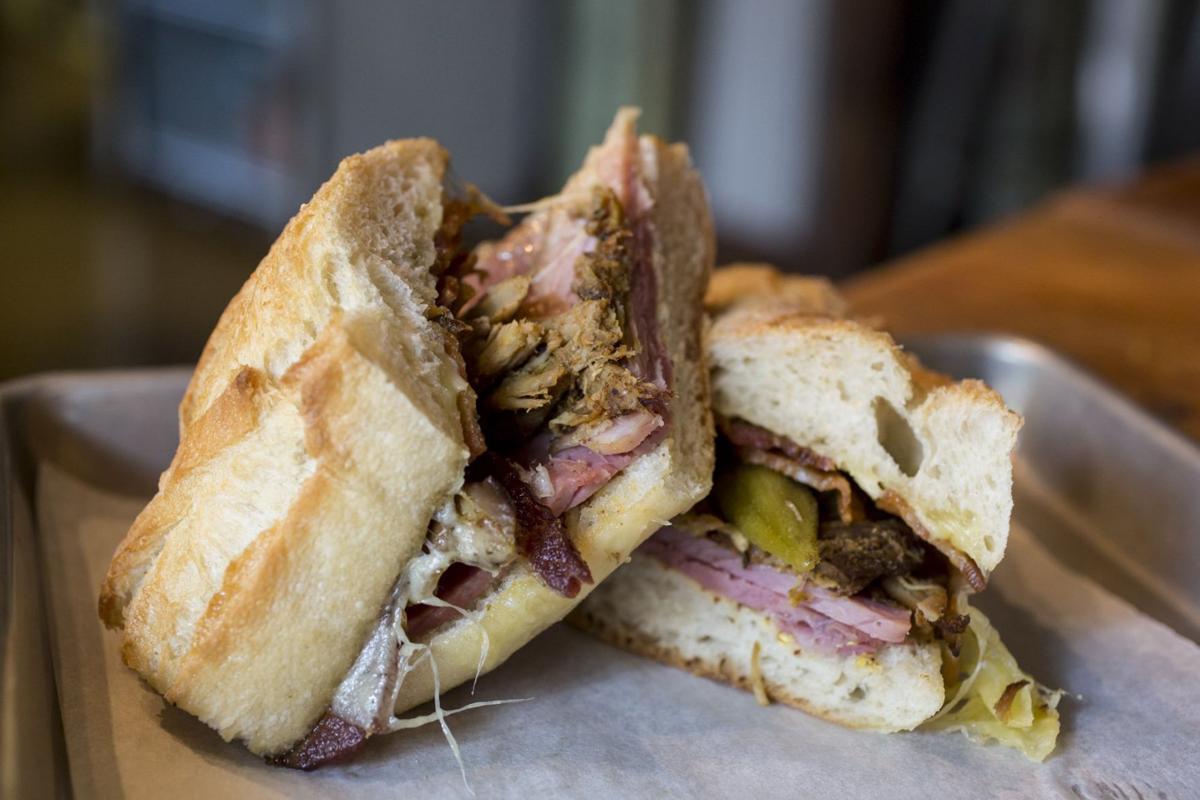 St. Louis’ enthusiasm for barbecue showed no signs of dimming in 2017, and you’ll find a few traditional barbecue restaurants among my honorable mentions. For my money, though, the best barbecue restaurant to open this year is a sandwich shop. Chef-owner Chris Delgado makes smoked meats the focal point of the Wood Shack’s sandwiches: pastrami; hickory- and mulberry-smoked prime rib with bone-marrow aioli, charred onion, arugula and blue-cheese cream (the Soulard Primer); hickory- and cherry-smoked ham with bacon and pulled pork (Three Cheesy Pigs). I suppose you could remove these meats from the sandwiches and enjoy them as “regular” barbecue, but it’s a credit to Delgado’s inspired creations that you won’t want to. 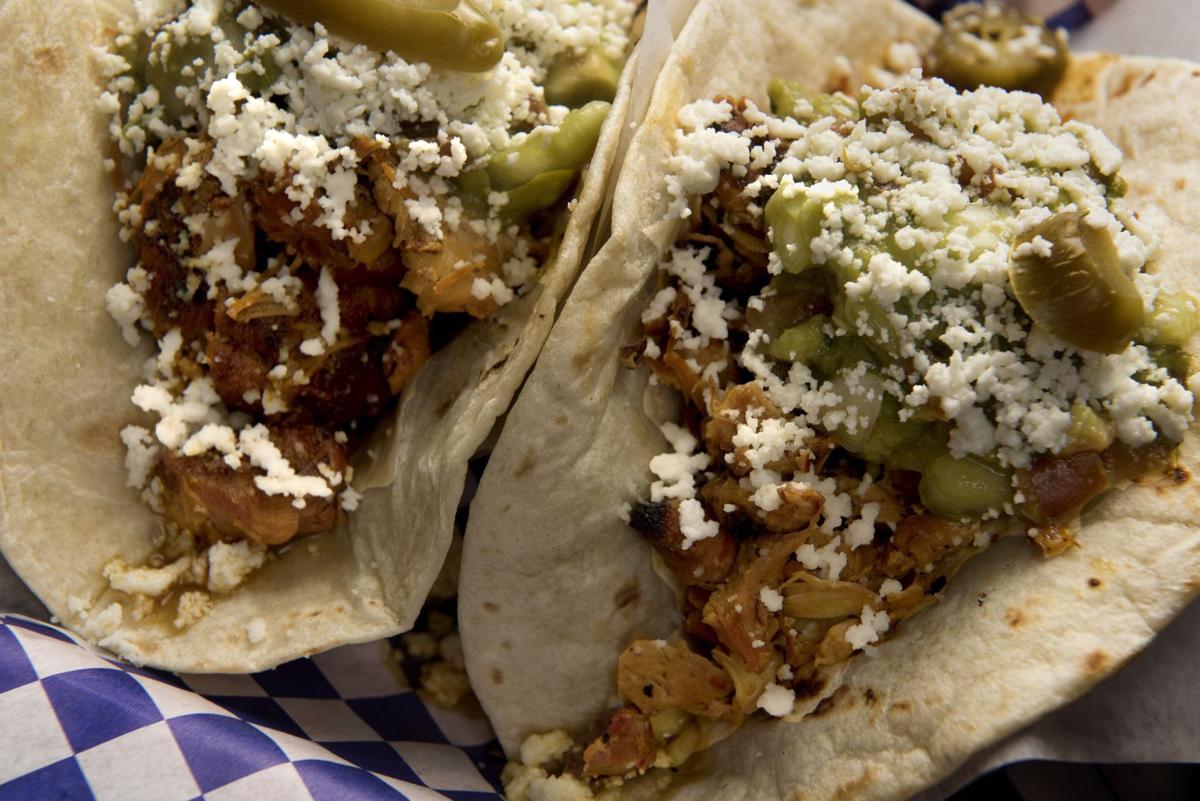 Cherokee Street wasn’t exactly lacking for taquerias when the Taco & Ice Cream Joint opened this spring, but the Rico family had built a devoted fan base with the weekend-only taco stand at their Bridgeton grocery store, and their first restaurant is a welcome addition to an already vibrant neighborhood. Tacos are a highlight, of course, with pork (al pastor, carnitas and cochinita pibil) and beef (barbacoa, cabeza) the standouts, but don’t miss the chile-sauce-soaked torta ahogada with carnitas, and definitely save room for ice cream or a paleta. The variety of flavors is nearly matched by the variety of toppings. 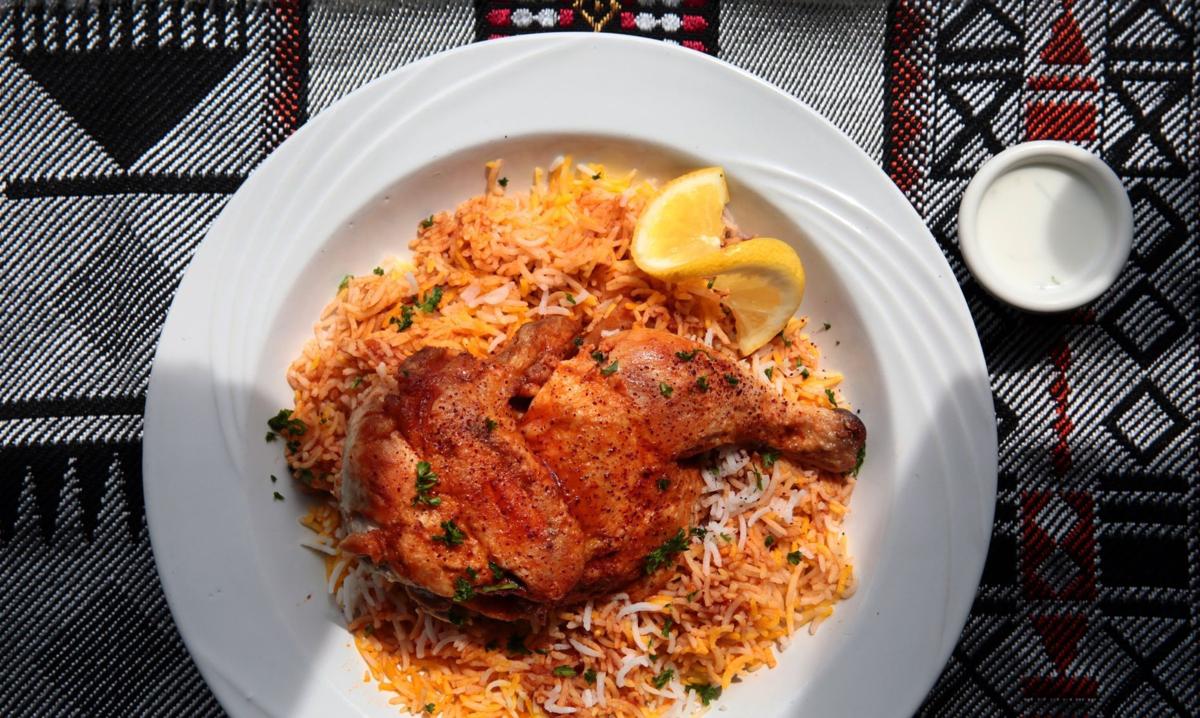 Visit the Palm Trees for kabli hijazi (warmly spiced lamb in a sauce brightened with orange zest) or the hearty, smoky lamb dish mandi, and you’ll wonder why St. Louis doesn’t have a Saudi Arabian restaurant in every neighborhood. In fact, Fedaa Alsadeq and her husband, Osama Almoerfi, introduced St. Louis to the cuisine of Saudi Arabia when they opened their first restaurant in an attractive Cherokee Street storefront at the end of 2016. Alongside the kabli hijazi, madi and other Saudi Arabian specialties, the menu also includes such familiar and broadly Middle Eastern fare as falafel, chicken shawarma and beef kebabs.

The first thing I noticed about Hugo’s Pizzeria was nothing at all. This 4-month-old midtown…

Movie listings, reviews and more delivered to your inbox.

The latest talk about the Cardinals delivered to your inbox.