'I’m Alright': A look back at ‘Caddyshack’ as film turns 40
0 comments
Share this
{{featured_button_text}}

"Caddyshack,” released 40 years ago this summer, tells the story of the working-class caddies, slobs, wise-asses and nouveau riche who clash with the calcified swells of a country club.

“Caddyshack,” as freewheeling, unpretentious, as obsessed with class war as modern America, is that rare over-quoted and over-watched movie demanding another look now.

“Caddyshack” was directed by Harold Ramis, who grew up in Illinois and died in 2014. He made his career — “Animal House,” “Ghostbusters,” “Stripes” — on movies about irreverent guys facing down an establishment.

“Caddyshack,” Ramis' first directing job, was based on the stories from the Murray brothers of Wilmette, Illinois — Bill, Brian, et al. They caddied public courses in Evanston and at Indian Hill Club, a private course in Winnetka.

It wasn’t made in Illinois because production was set for autumn 1979. So, “Caddyshack,” though inspired by Illinois, was set in Nebraska and shot in Florida.

The concept for “Caddyshack” was sold as “Animal House” on a golf course — “Animal House” being a still-fresh blockbuster co-written by Ramis and Doug Kenney. Initially, though, Ramis pitched a very different comedy, about the American Nazi Party’s attempt to march through Skokie, Illinois, in 1978.

“Caddyshack” may be signature Bill Murray, but older brother Brian Doyle-Murray was more involved. Bill spent a short time on the set. Brian provided the idea, co-wrote the screenplay (with Ramis and Kenney), then played the manager of the caddy shack. When the film was released, he had just become a featured player (and Weekend Update anchor) for “Saturday Night Live.”

Brian based Lou Loomis, his character, on Lou Janis, an Indian Hill caddy master. According to “Cinderella Story,” Bill Murray’s 1999 golf memoir, Janis would “bet on anything.” In the movie, Loomis wagers that a member will pick his nose and eat it. (He wins.)

As early as the mid-’70s, Bill Murray was performing variations of his character Carl Spackler — his side-talking, imbalanced, philosophical groundskeeper — as a cast member at Chicago’s Second City.

After Ramis died, Barack and Michelle Obama issued a statement of appreciation, including the hope that Ramis, upon death, “received total consciousness.”

I don’t know if it was intentional but the pinkish sunburn on Knight is the exact color of the salmon that a stuffy institution like fictional Bushwood Country Club would serve regularly.

That infamous pool evacuation scene — a Baby Ruth candy bar lands in the water and gets mistaken for something more scatalogical — was inspired by an actual prank that had been played while the Murray brothers attended Loyola Academy in Wilmette.

That scene, shot four years after the release of “Jaws” (and borrowing John Williams’ iconic score) is remarkably faithful to Steven Spielberg’s staging. Ramis keeps the camera at the water line, waves swamp the lens, and the stampede out of the water is ugly, out of focus at times.

Early in the film, Brian Doyle-Murray’s cranky caddy wrangler explains to his unruly charges that they need to buckle down and stop screwing around. The club would just as well replace them with cheap, less mouthy golf carts. Indian Hill still has live caddies.

I visited Indian Hill the other day. It reminded me of New England. The buildings, vaguely colonial, were tasteful, the club house less opulent than the neighborhood homes. The lobby was cute and fusty, like a drawing room no one uses. Caddies wore COVID masks, and the caddy shack from the Murrays’ days is still there — white-painted brick, green trim, like a Nantucket coffee house.

Many characters were based on Indian Hill regulars. Several employees (as in the film) had Irish accents. Chase’s self-satisfied Ty was based on a member. As was the elderly couple who can barely swing their clubs — according to Murray’s book, he caddied for a very old member who had trouble hitting anything. Until his bosses caught on, he routinely marked the guy down for holes-in-one.

According to Jamie Pfaff of Winnetka, who was on the Indian Hill grounds crew 50 years ago, “The film is an exaggeration, but it did have a slightly older and slightly out-of-it membership.”

Despite several decades having passed, the Indian Hill management will not discuss “Caddyshack” at all. In the clubhouse, on the grounds — there is not one mention of the film. Actually, wait: The pro shop sells Bushwood Country Club and gopher-themed belts. A member whispered to me: “Not all our members appreciate ‘Caddyshack.’ ”

Caddies in “Caddyshack” accept tips. Caddies at Indian Hill do not.

The clothing in “Caddyshack” — sleeveless T’s, stiletto heels, Dangerfield wearing more plaids than a hipster — becomes a character in itself. At Indian Hill, however, according to its website, sports jackets must be worn during lunch, shirts should be tucked-in, cargo shorts are not permitted, nor are denim cutoffs around the pool area. Hats must be worn “bill forward” only.

Cindy Morgan, who played Knight’s sophisticated, promiscuous niece Lacey Underall, grew up in Chicago. Before acting, she was morning DJ at WSDM-FM (now WLUP, “The Loop”).

The only Black actor with a line was Jackie Davis, who shines shoes at the club and, after overhearing Knight’s character tell a racist joke, destroys the member’s golf cleats. Davis wasn’t really an actor. He was an accomplished jazz musician who helped popularize the Hammond organ, made several solo albums and backed Louis Jordan and Ella Fitzgerald.

The only non-white characters given any prominence are played more as props than people. Mr. Wang, Dangerfield’s clubhouse sidekick — “I think this place is restricted, Wang! So don’t tell ‘em you’re Jewish!” — is identified in the credits as “Dr. Dow.” His full name was Tsung-I Dow. Before arriving in the United States after World War II (via a Merchant Marine ship delivering aid to Hiroshima), he was an officer in China’s Nationalist Party. He became a history professor in Florida.

The chaotic family home in the film’s opening scenes — lines of kids waiting outside the bathrooms, bawling children and slamming doors — was inspired by the Murray family home in Wilmette. A three-bedroom home with nine kids. Bill Murray once described the scene there as “a wreck, a constant, claustrophobic mess.”

“Caddyshack,” at first, looks like a lot of ’70s films. There’s a disorderly middle-class home, a hero who crosses tracks to reach the rich part of town. (I detect robust notes of “Close Encounters of the Third Kind” and “Breaking Away.”) But once the film crosses tracks, the rest follows. The movie plays closer to a Marx Brothers comedy now — much of the action unfolds in single shots, as if we’re watching a play, there’s spontaneous dancing and less story than gags. (Ramis himself claimed Bill Murray was intended to be all the Marx Brothers in one man, wise-cracking, lascivious and down to earth.)

That scholarship plot was inspired by Ed Murray, the oldest Murray brother, who won the prestigious Evans Scholarship given to exceptional caddies. It gave him a full ride to Northwestern University.

Actor Michael O’Keefe, who played Danny, that mildly rebellious scholarship candidate, was later an Oscar nominee for “The Great Santini” and married to Bonnie Raitt for eight years.

Other than Bill Murray’s performance, you probably remember the gopher, wreaking havoc across the course. It’s unclear if this is related, but according to a 2018 newsletter from the Winnetka Historical Society, during the late ’60s, a muskrat took up residence near the 16th hole at Indian Hill. One night, a frustrated groundkeeper, a military vet, waited until the animal revealed itself, then flipped on the headlights of his ATV and fired a shotgun at the wild beast. (He missed.)

Insane as it sounds, though Kenny Loggins’ “I’m Alright” became the soundtrack’s ubiquitous smash, Ramis wanted Pink Floyd initially to do the music. (They were busy.)

Pink Floyd would have been all wrong. “Caddyshack,” like “Star Wars” a couple of years before it, is actually very old-fashioned stuff, with a wink of irony pointing toward a less earnest future.

“Caddyshack” celebrates the underdog, but the culture of the 1980s that followed those films was enamored paradoxically with privilege. You can see it happening in the film, which at first is about working-class kids with summer jobs but gradually tells the story of the feckless captains of industry whom they serve.

Last year, in his book, “Audience of One: Donald Trump, Television and the Fracturing of America,” James Poniewozik, TV critic for The New York Times, makes a compelling case that Trump essentially campaigned for president as a variation of Dangerfield’s character — as a crass and insult-spewing real-estate mogul who upsets the establishment, whose “wealth doesn’t give him membership in high society, just the independence not to care about its rules.”

The only time I met Ramis was backstage before an event at Columbia College. A film student told him that “Caddyshack” was his favorite movie of all time. Ramis smiled sincerely and laughed: “Thank you, but I hope you make better movies than that one.”

Doug Kenney, the co-screenwriter and producer, died a month after “Caddyshack” was released. He was found at the bottom of a ravine in Hawaii. As Chris Nashawaty recounts in his 2018 history, “Caddyshack: The Making of a Hollywood Cinderella Story,” Kenney was such a troubled, drug-addled writer some friends assumed he killed himself, while others said he slipped. Ramis liked to say: “He fell looking for a place to jump.”

Of the many “Caddyshack” tributes, my favorite is a 2004 American Express ad with Tiger Woods as the groundkeeper. It was made by Chicago advertising guy Jim Larmon, who said Woods was such a “Caddyshack” fan, he resisted saying any line that Murray didn’t say in the film. Warner Bros. even gave them a gopher, Larmon said. “They claimed it was an original. It wasn’t.”

At the back of the Crowne Plaza in Rosemont, Illinois, surrounded by a drab parking lot, there is another homage: The Murray Bros. Caddyshack, one of two “Caddyshack” theme restaurants owned by the brothers. (The other is outside Jacksonville.) “Eat, Drink and Be Murray” reads the sign. Inside, a sports bar, outfitted with Bill Murray film posters, Murray family holiday photos and even a Murray — Andy is the chef, floating between Florida and Rosemont. Yes, Bill drops by — a few times a year, I’m told. “Though to be honest, that family is so big,” a waiter said, “it’s like one of them is here every day.”

Before “Caddyshack” was released 40 years ago, Ramis told the Chicago Tribune that, though the movie was contemporary, its ’70s nihilism and casual golf club already made it a period piece. He wished they set it in the ’60s, like “Animal House.” The movie “should have said at the beginning ‘Chicago 1963,’ because ‘Caddyshack’ really is about things that don’t even exist anymore.” 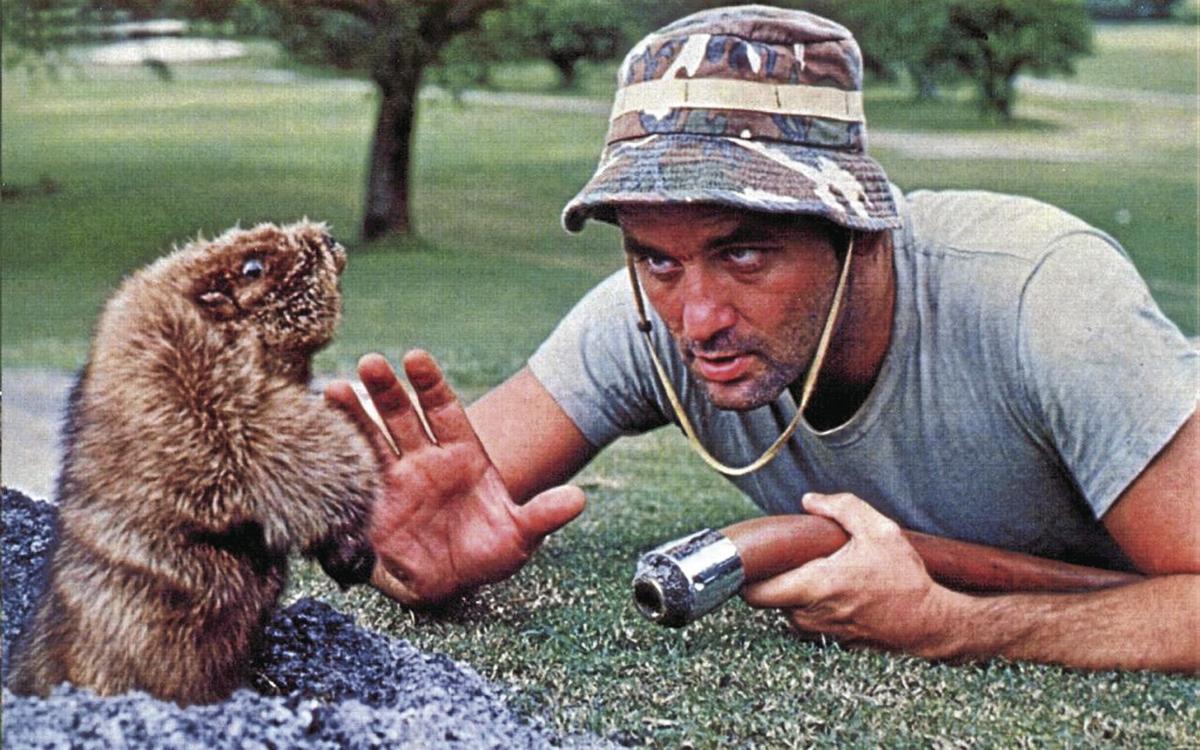 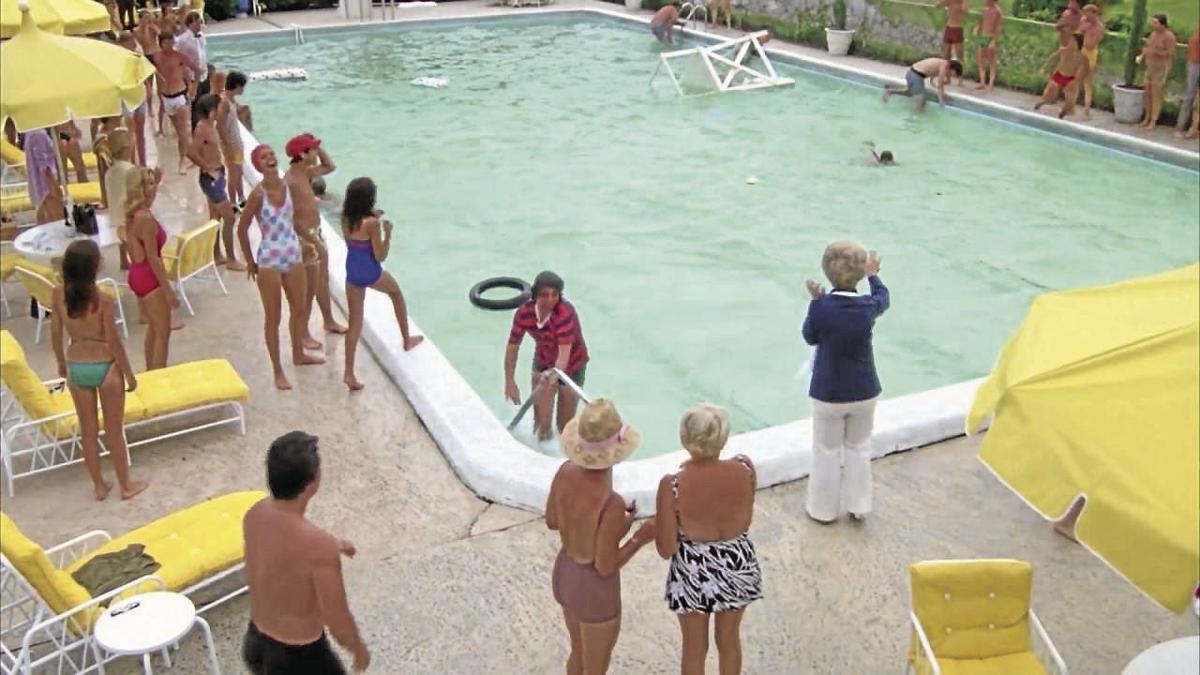 “Everybody out of the pool!” is a classic scene from the 1980 movie “Caddyshack.” 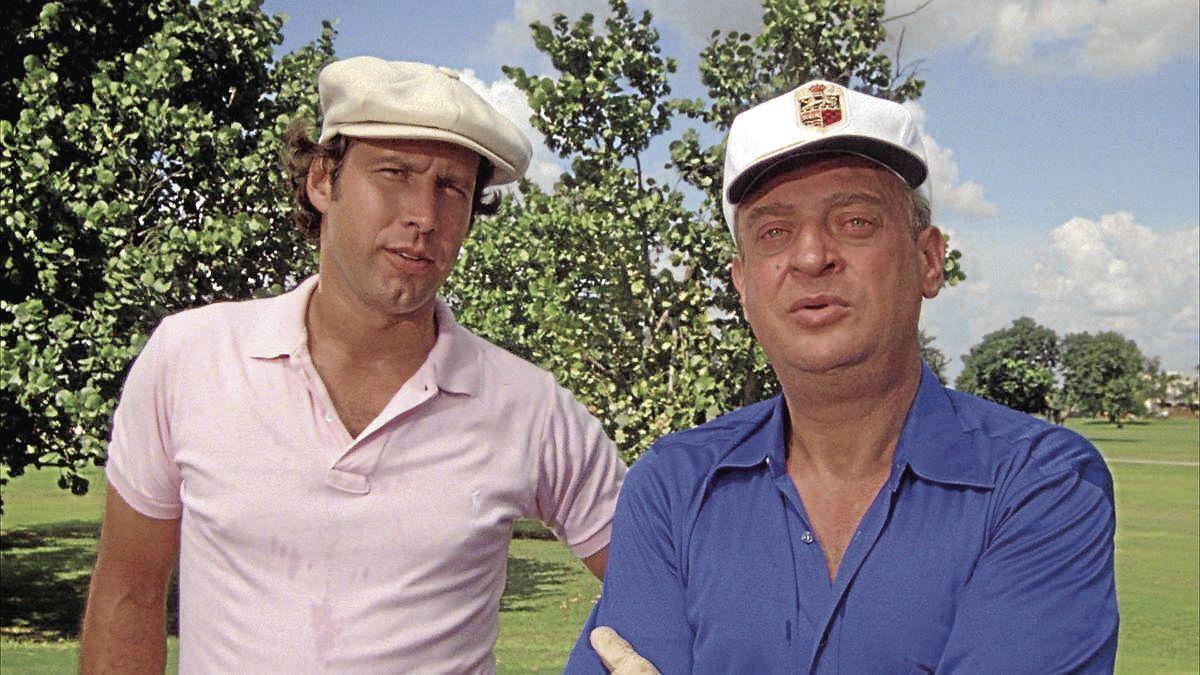 Chevy Chase (left) and Rodney Dangerfield starred in "Caddyshack" along with Bill Murray and Ted Knight. 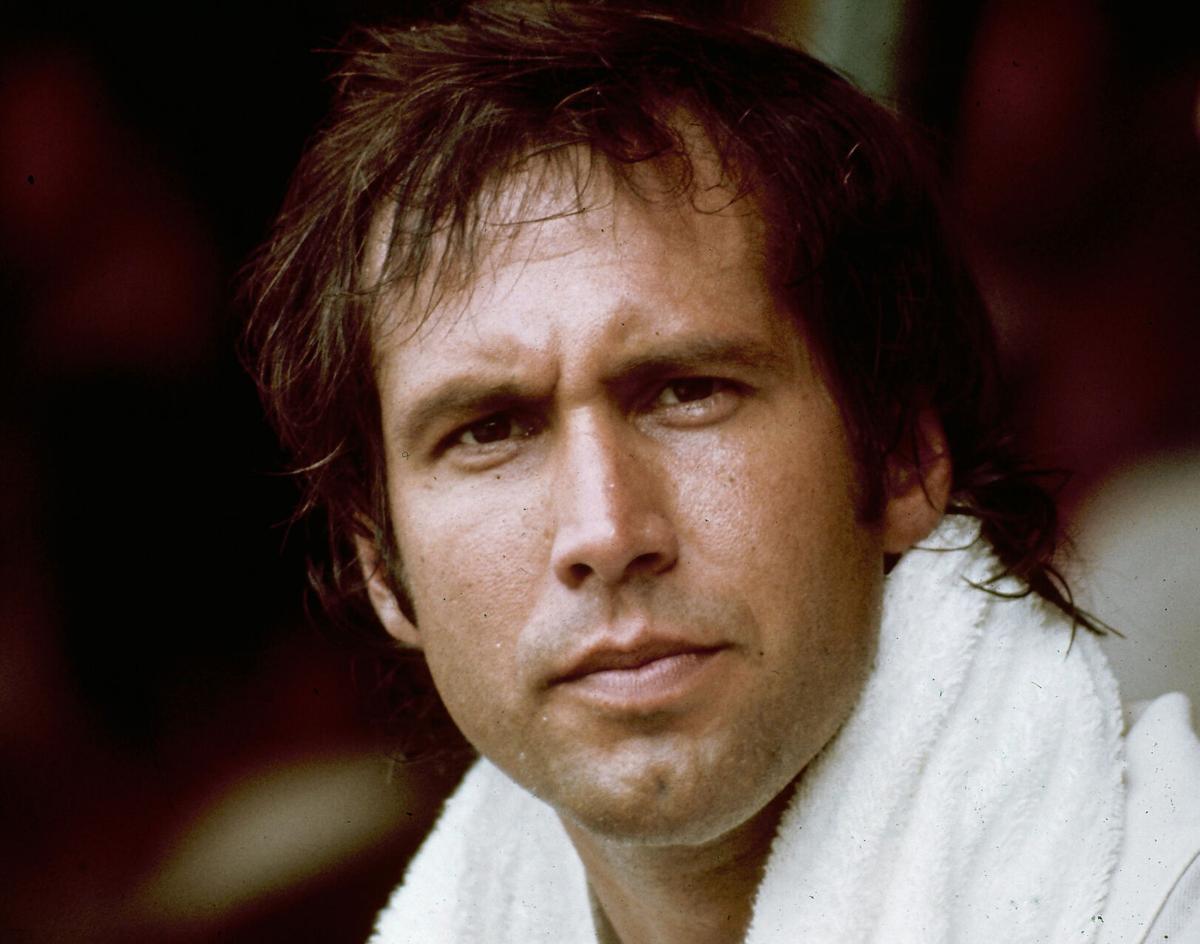 Chevy Chase's character in "Caddyshack" was based on a member at Indian Hill golf course in Winnetka, Ill. 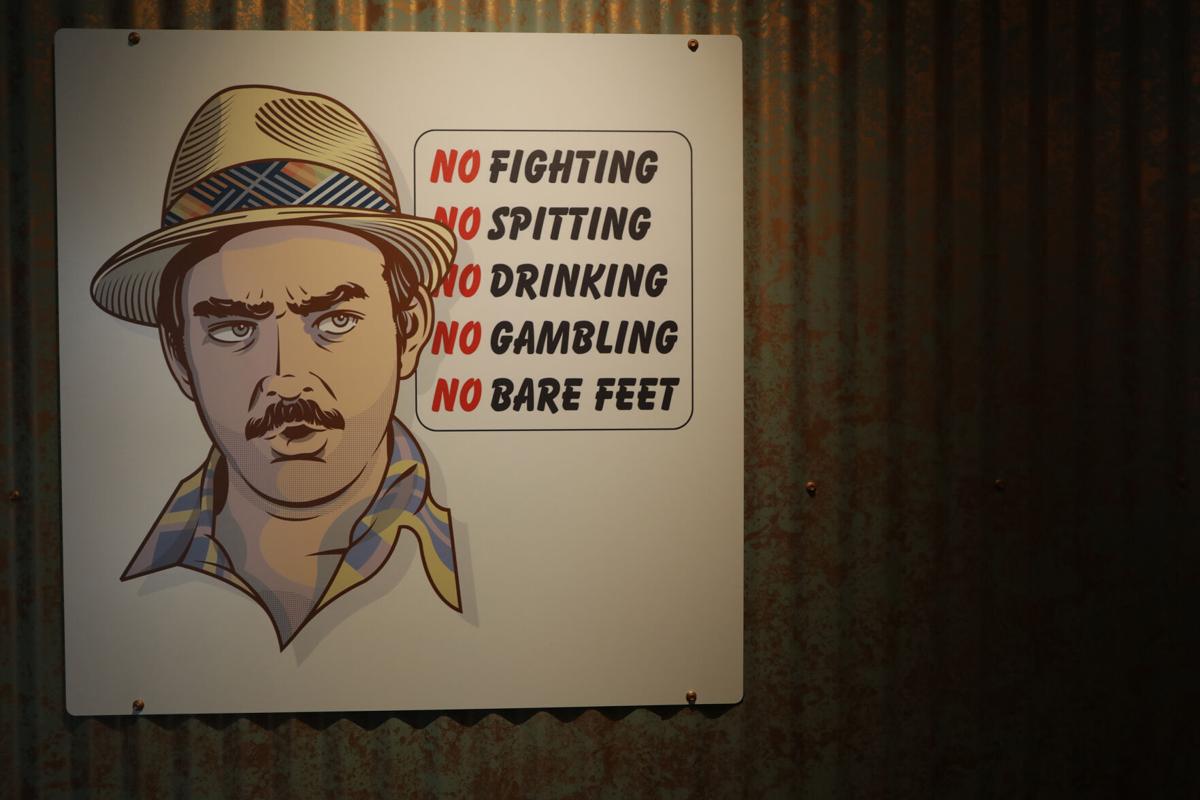 A sign at the Caddyshack restaurant in Rosemont, Ill., shows an image of Brian Doyle-Murray as the manager of the caddy shack in the movie. 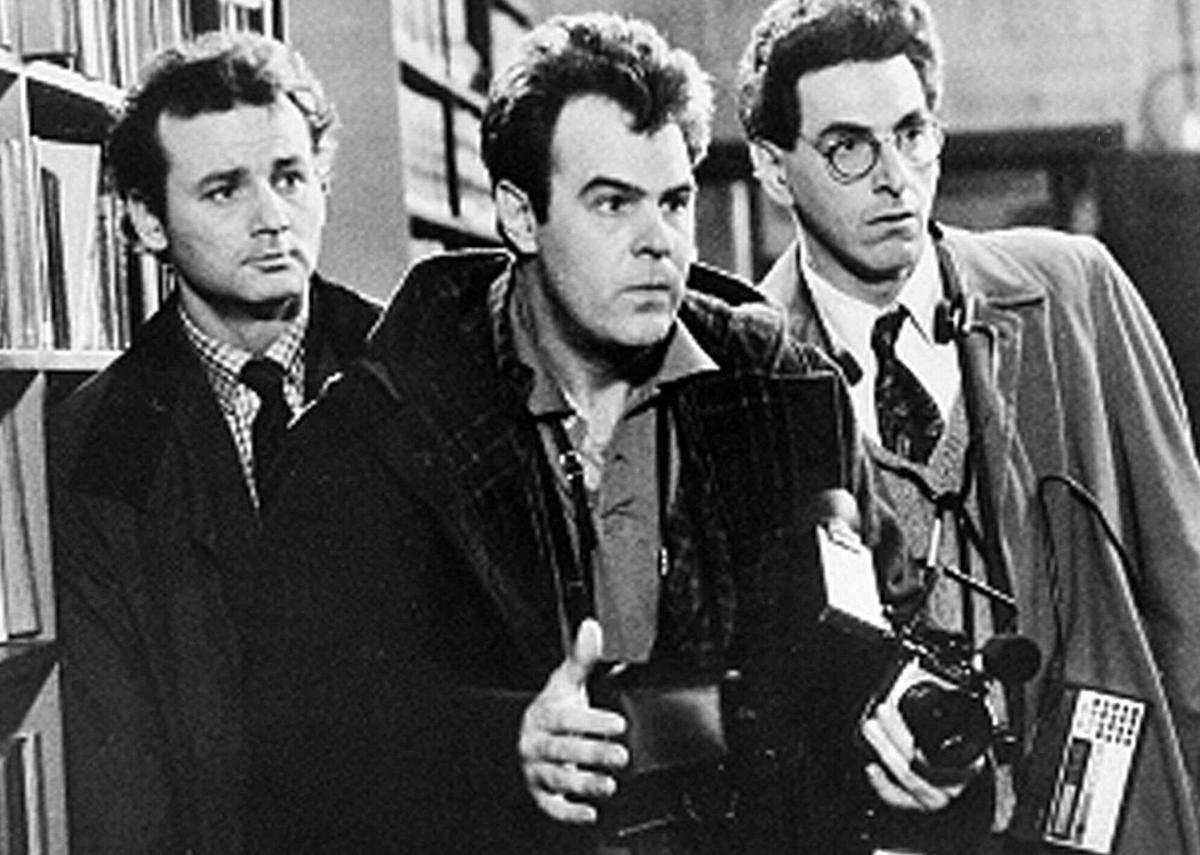 Shown in this scene from the 1984 movie "Ghostbusters" are Bill Murray, Dan Aykroyd, center, and Harold Ramis. 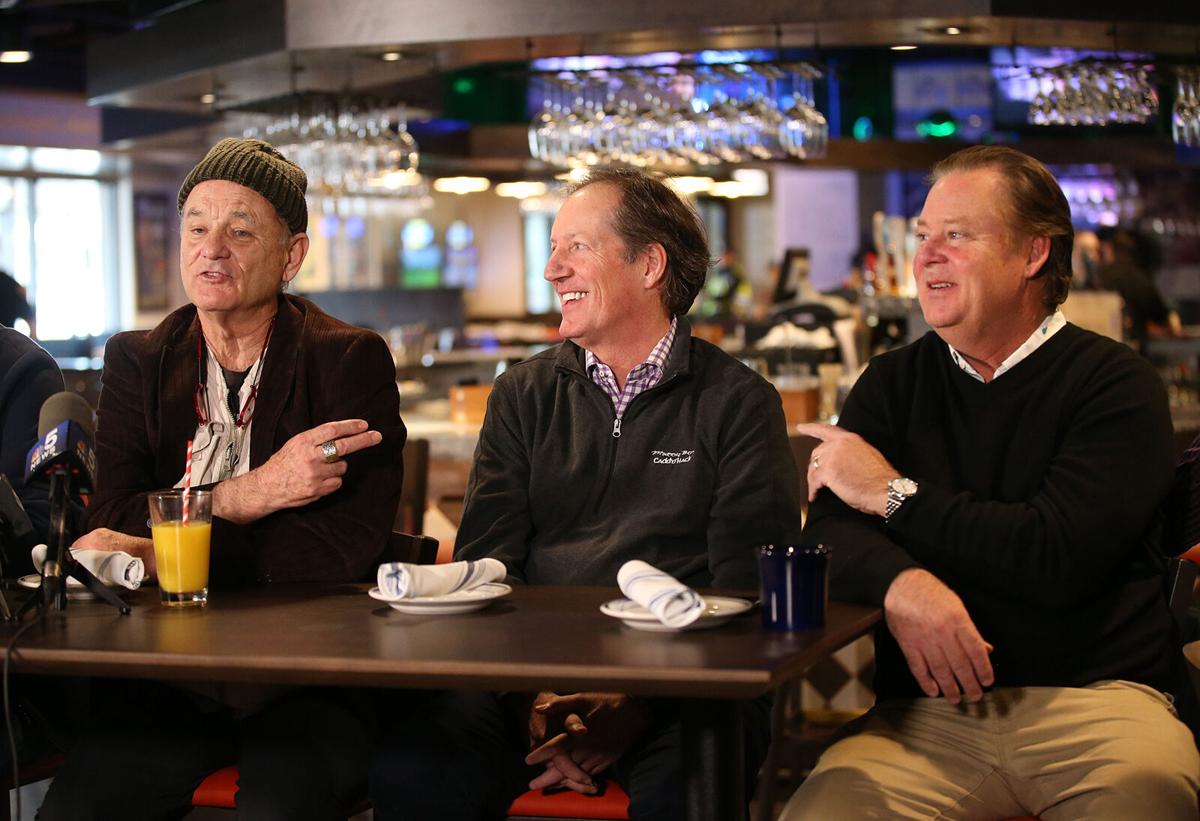 Actor Bill Murray, left, speaks along with Mac Haskall and brother Joel Murray at Caddyshack restaurant in Rosemont, Ill., in 2018. 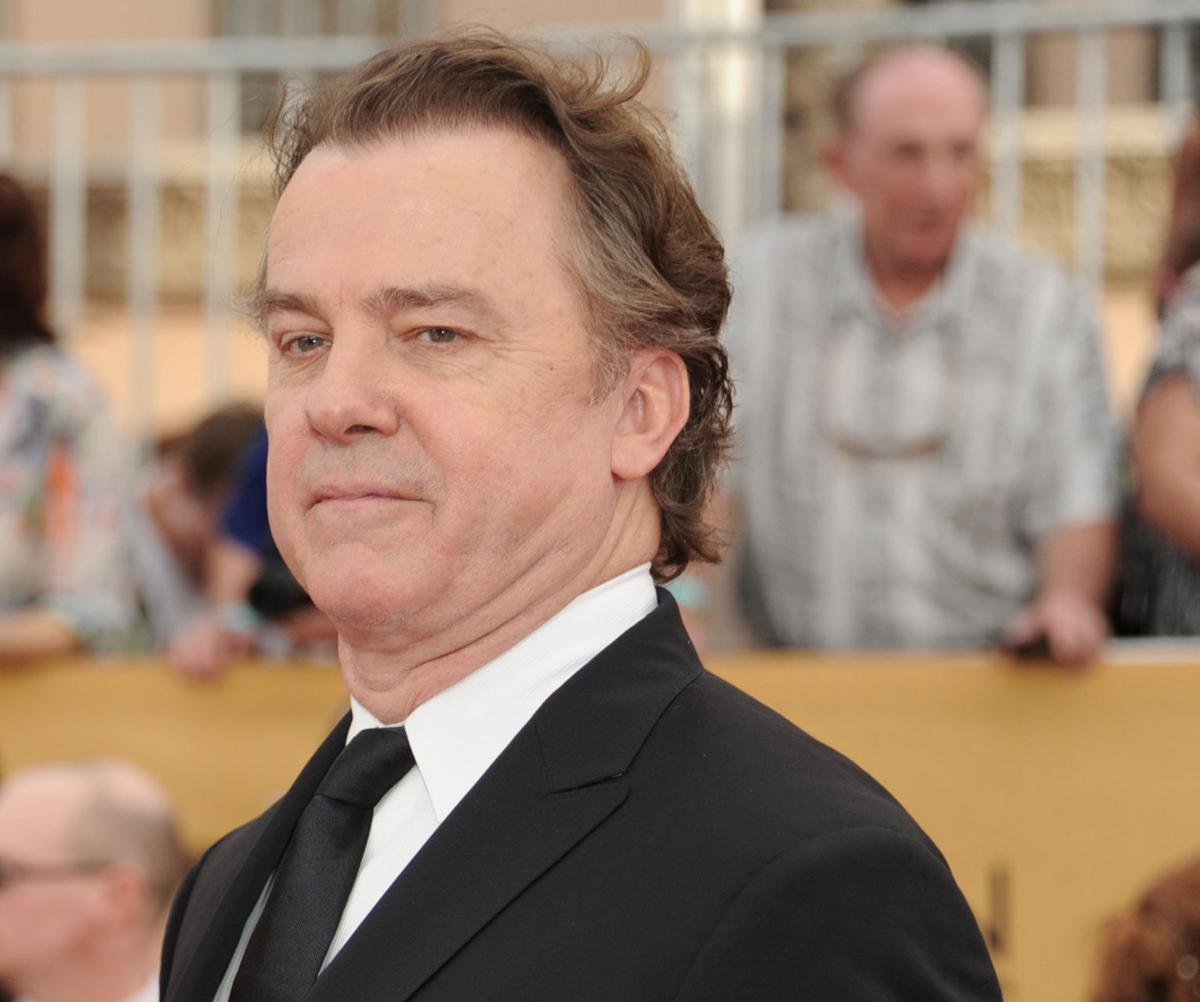