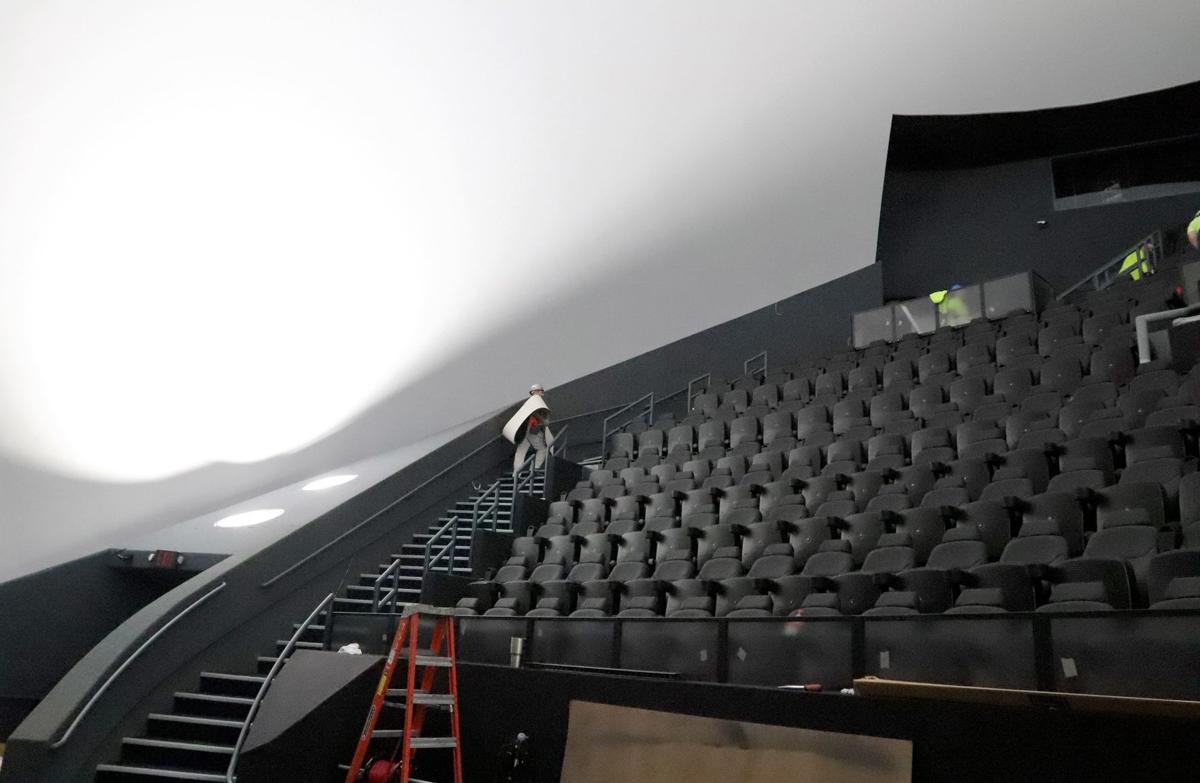 Workers install lighting and carpet in the renovated Omnimax Theater at the St. Louis Science Center. After a four-month renovation, the theater reopens Friday. 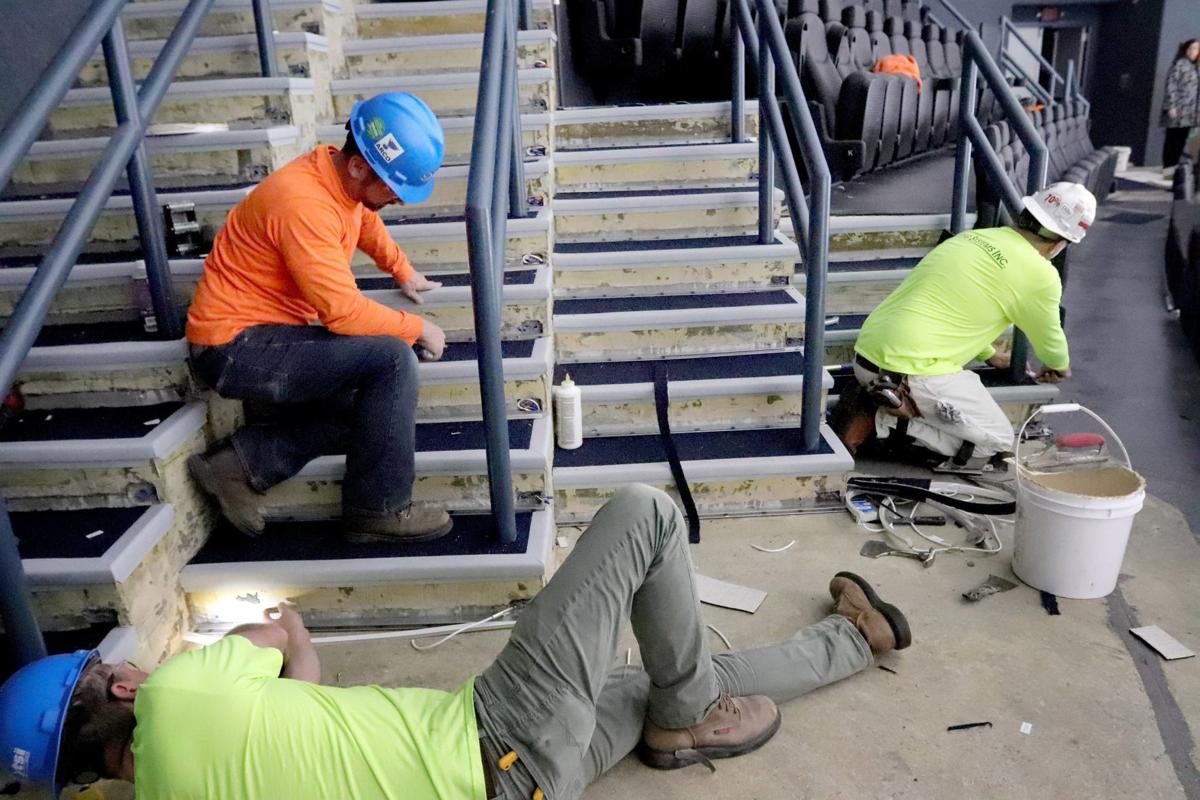 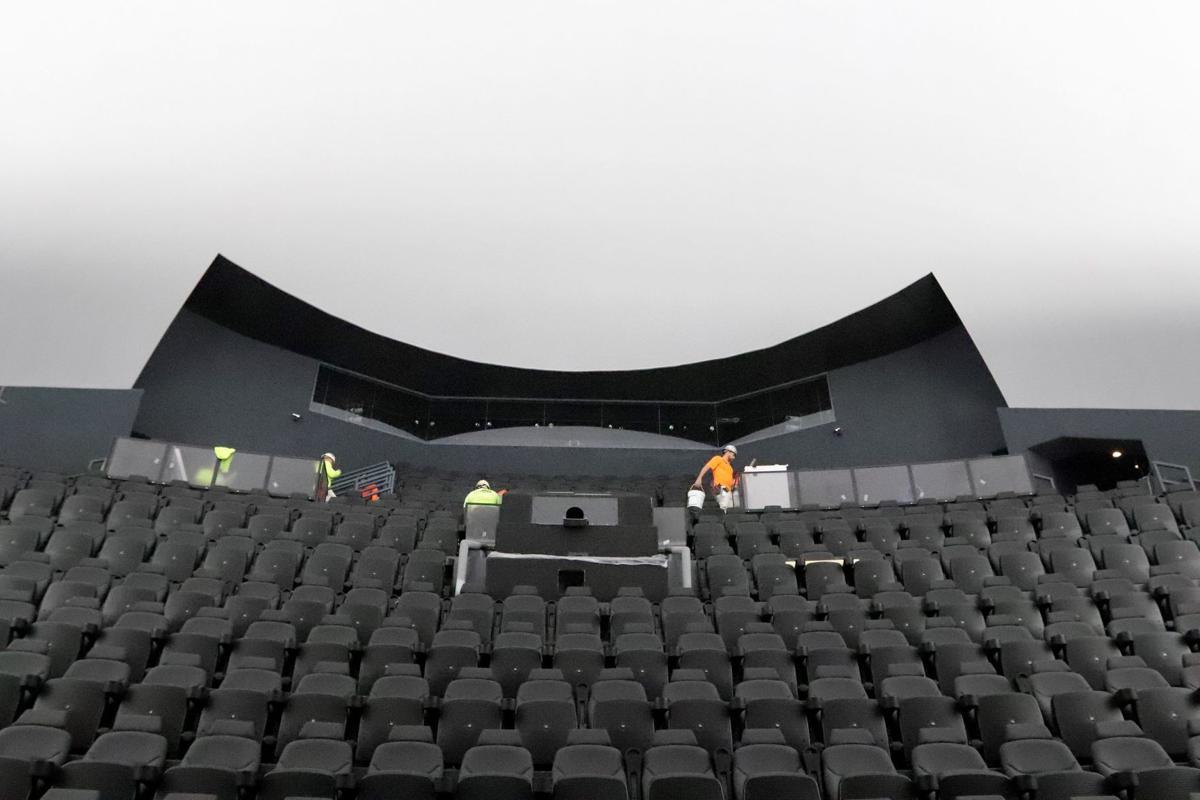 Workers install lighting and carpet at the Omnimax Theater at the St. Louis Science Center on Nov. 21, 2019. After a four-month renovation, the theater reopens Nov. 29, 2019. 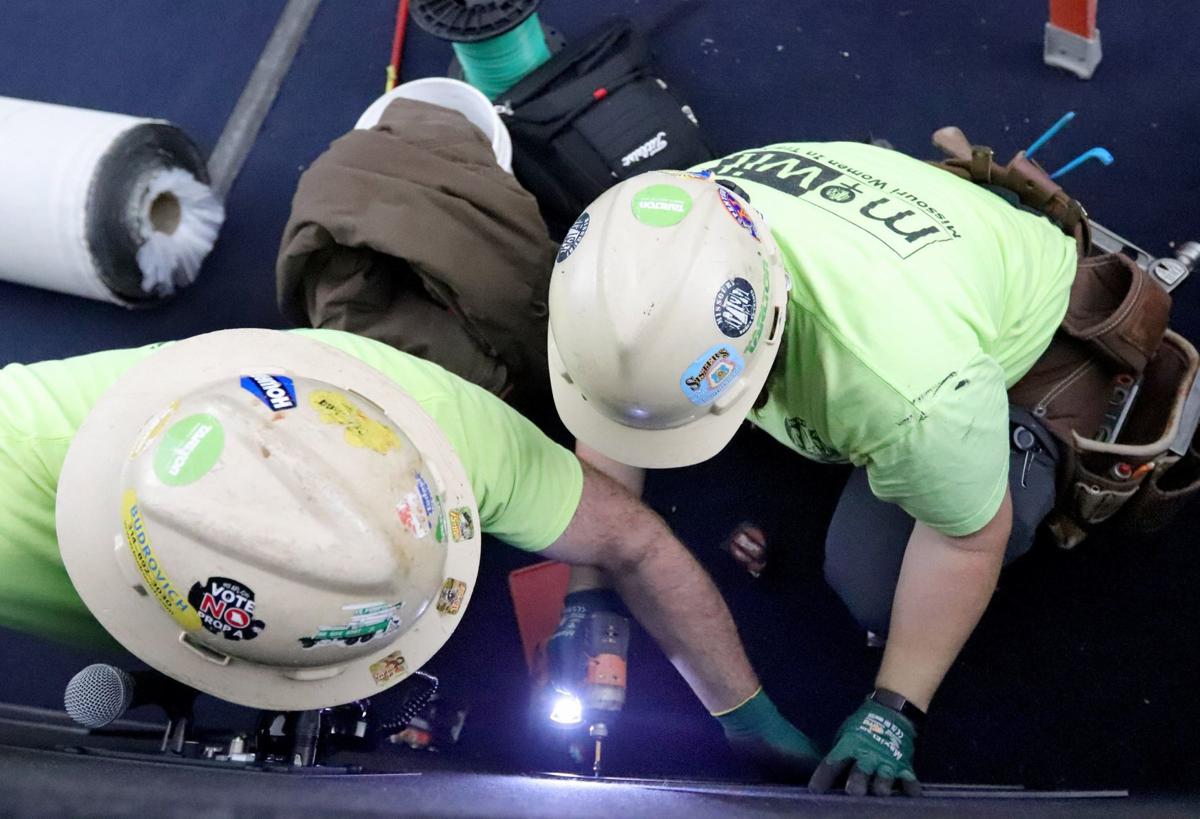 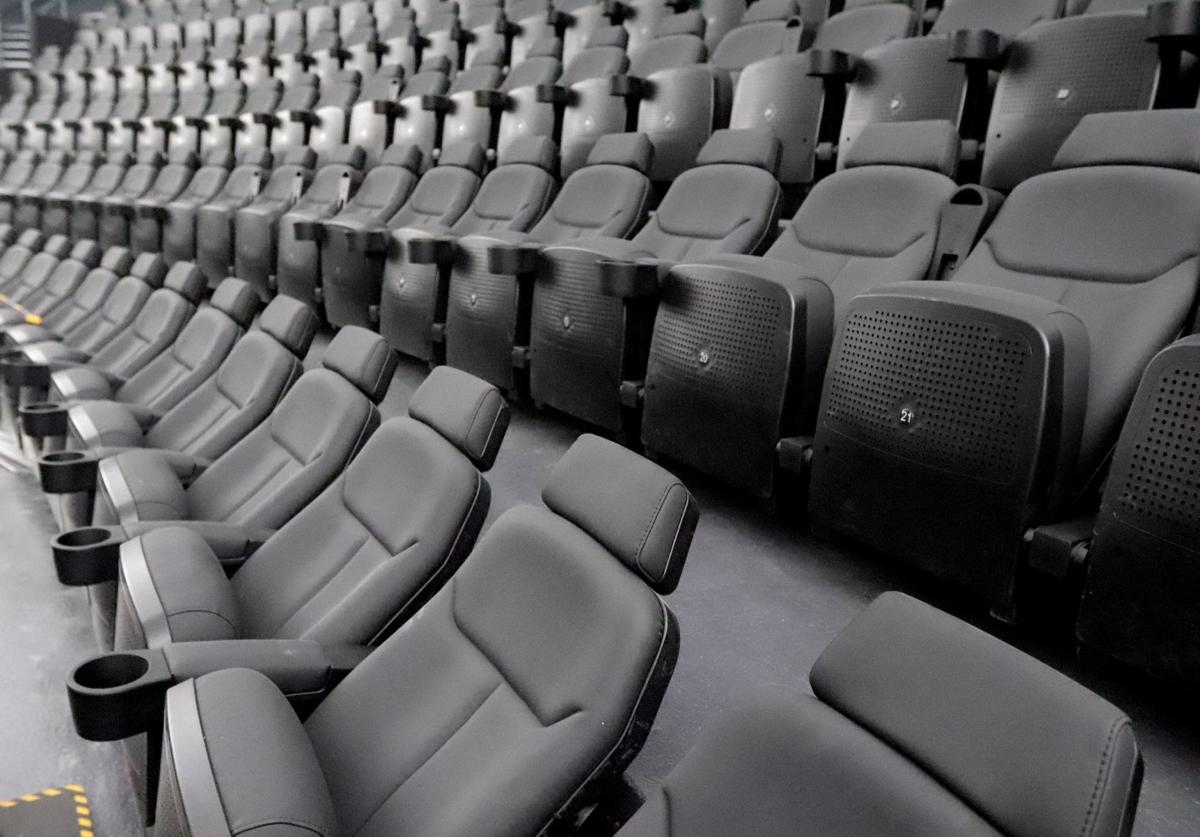 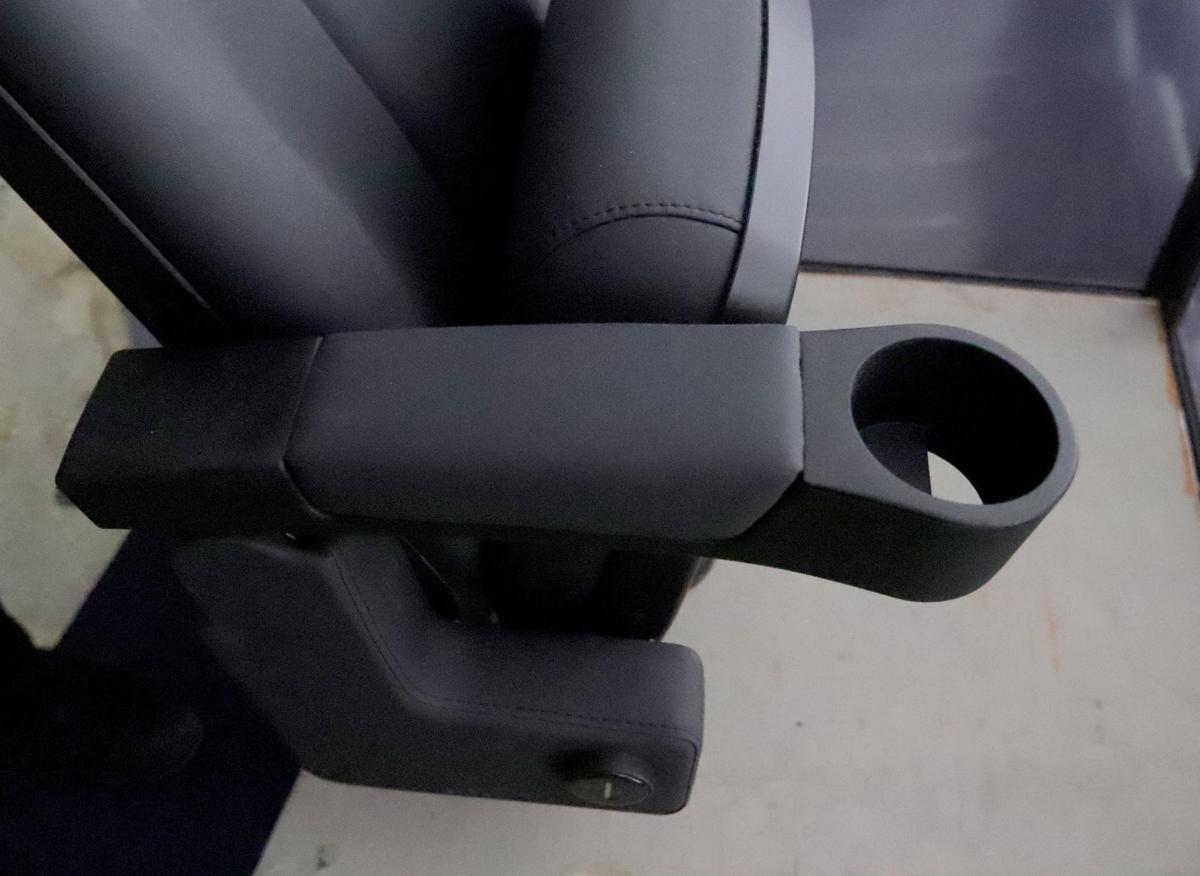 This movie remake promises to be better than the last.

When the Omnimax Theater at the St. Louis Science Center reopens Friday, it will be one of four domed theaters in the world featuring Imax With Laser. The theater closed in July for the upgrade.

The theater also now has the ability to screen feature-length films typically seen at other theaters. It reopens with “Frozen II,” along with the documentary “Great Bear Rainforest.” The documentary “Volcanoes: The Fires of Creation” also returns, and starting Dec. 20, the theater will screen “Star Wars: The Rise of Skywalker.”

“The colors in ‘Frozen’ are just going to pop like you wouldn’t believe,” says Jackie Mollet, the St. Louis Science Center’s managing director of visitor services.

She says museum leaders had been talking about converting the theater to digital since about 2014, as more multiplexes made the transition. “We knew it was coming. We just didn’t know what our solution was going to be.”

Over time, the variety of documentaries the theater could show decreased, and prices to acquire movies increased, ranging from about $18,000 for a documentary to $35,000 for a feature film. An analog film weighed about 250 pounds and could cost $500 to ship to the theater.

Now, a film arrives on a much smaller hard drive, and the titles are about 60% cheaper, Mollet says.

Moviegoers will see a 95-cent price increase for documentary films ($10.95 for adults, $8.95 for ages 2-12). A ticket for a feature-length film, which includes parking, remains the same price ($16.95 for adults, $14.95 for kids). Military, senior and student discounts are available. Some tickets are free to museum members.

The Omnimax Theater opened in 1991 and was renovated in 2004 to install a new reel unit that allowed feature-length films to be screened without an intermission. The auditorium had 315 seats and now has 270, due to wider seats and additional accessibility.

The renovations also include the addition of adjustable captioning devices and hearing assistance devices with the option to listen to a descriptive narration. Guests with hearing aids and or cochlear implants can have the audio transmit directly to their device.

The stage in front of the screen has been elevated 18 inches to make it easier for the audience to see presenters. And the theater has the ability to livestream and simulcast events, which will make it possible to host other events besides film screenings. The science center’s educators are already thinking up possibilities, Mollet says.

As for films, Mollet hopes to show more Marvel movies and possibly “Top Gun: Maverick” and “Wonder Woman 1984” when they debut next year.

Domed screens with Imax With Laser are only at science museums in Cincinnati; San Jose, California; and St. Paul, Minnesota.

“The image is rock solid,” says Mollet, who has seen several movies on such screens, “and the depth of contrast is just beautiful.”

“The colors in 'Frozen' are just going to pop like you wouldn’t believe.”

The nominees for the Academy Awards have been announced in Los Angeles.

Scarlett Johansson doubles up in Oscars acting nods. That hasn’t happened in 12 years

First-time Oscar nominee Scarlett Johansson achieved a rare feat on Monday when she was nominated for two acting honors, which will be doled o…

Here are the nominees for the 92nd Academy Awards

The 2020 Oscar nominations were announced Monday morning to lots of … mixed feelings. If you want to catch up on some of the nominated films, …

In cursed ‘Dolittle,’ they could not have done less

The only appropriate adjective for this “Dolittle” is “hasty.”

Tim Roth, Clive Owen star in 'The Song of Names,' a violin saga steeped in mystery

Tim Roth and Clive Owen star in beautifully told chronicle of faith, family, obsession and the language of music.

Martin Lawrence is back, baby!

Workers install lighting and carpet in the renovated Omnimax Theater at the St. Louis Science Center. After a four-month renovation, the theater reopens Friday.

Workers install lighting and carpet at the Omnimax Theater at the St. Louis Science Center on Nov. 21, 2019. After a four-month renovation, the theater reopens Nov. 29, 2019.