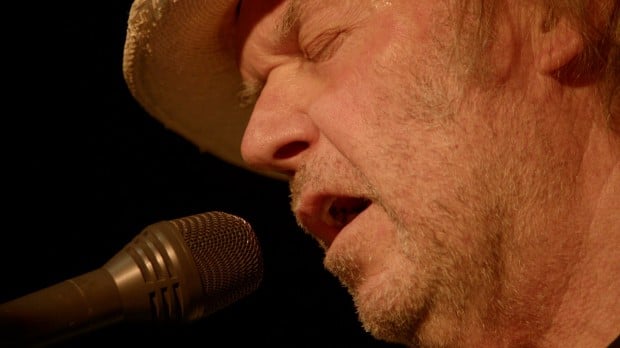 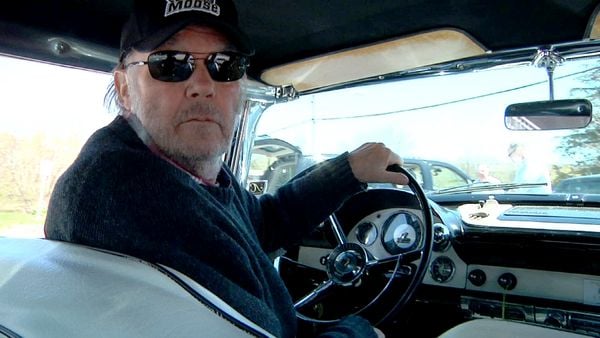 Neil Young in his 1956 Ford, from the concert documentary "Neil Young Journeys."

Neil Young is one of the most prolific and unpredictable figures in popular music. Since the mid '60s, he has ambled from folk-rock to country to grunge to techno. At age 66, he dabbles in distortion, tours tirelessly and makes political pronouncements that resurrect the energy of the Woodstock generation. But even his fans might wonder why he's been the subject of three concert documentaries by Jonathan Demme in six years (while directing a fourth one himself, about his sometime band Crosby, Stills, Nash and Young).

On its own terms, “Neil Young Journeys” is an enjoyable concert film of a solo show in Toronto, interspersed with memories of his Canadian boyhood. But in the overkill context of the trilogy, it's not clear where this is going.

The stellar first film, “Neil Young: Heart of Gold,” had a narrative thread. Young was facing brain surgery, and his star-studded concert in Nashville's historic Ryman Auditorium was haunted by the spectre of death. As Young's wife, Pegi, sang background vocals on tender love songs about her own imperiled marriage, the crossover between art and life became painfully clear.

For the second film, “Neil Young Trunk Show,” Young hauled out a hard-rock band and dusted off some forgotten nuggets from his spacious attic.

The title “Neil Young Journeys” implies an overview of his lengthy career, but the solo concert is more of a shuttle between two points. Almost all of the songs are either from his 1970 folk-rock pinnacle or from Young's feedback-fueled new album “Le Noise.”

While Young reprises the Kent State protest anthem “Ohio,” Demme flashes the names and photos of the four shooting victims on the screen; but that's one of the rare directorial intrusions in this mostly straightforward film. On stage, it's just Young and his instruments (guitars, pump organ, harmonica), trying to wring new sounds and significance from mournful songs. For every old fever dream like “After the Gold Rush,” there is a a new one like the drug litany “The Hitchhiker.”

Between some of the songs, we ride shotgun with Young as he drives through North Ontario in a '56 Ford and reminisces about his father, friends and fishing holes.

Although the concert ends with an invitation to “Walk With Me,” we're reminded that with Neil Young, it's never about the destination

Two and a half stars out of four • Rating PG • Run time 1:27 • Content some drug references • Where Tivoli

Neil Young in his 1956 Ford, from the concert documentary "Neil Young Journeys."