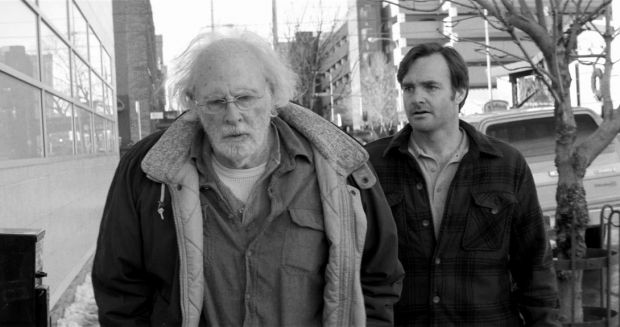 This image released by Paramount Pictures shows Bruce Dern as Woody Grant, left, and Will Forte as David Grant in a scene from the film "Nebraska," about a booze-addled father who makes to Nebraska with his estranged son in order to claim a million dollar Mega Sweepstakes Marketing prize. (AP Photo/Paramount Pictures)

Bruce Dern and Will Forte play a father and son in "Nebraska." (Courtesy Paramount Pictures/MCT)

Seven years ago, my wife and I got married in a town called Valentine, Neb. We chose it because of the name, but many couples from neighboring South Dakota choose it because the marriage-license fee is cheaper in Nebraska. That’s the kind of people who inhabit the Great Plains — pragmatic and unsentimental northern Europeans and Native Americans. They inhabit a harsh landscape but expect to be rewarded for their hard work.

Woody Grant (Bruce Dern) believes that his payoff has come at last, in the form of a million-dollar sweepstakes prize. But Woody is 77, too senile and sodden with booze to realize it’s a scam. His fed-up wife, Katie (June Squibb), and his protective son David (Will Forte) refuse to drive him from their home in Billings, Mont., to the sweepstakes office in Lincoln, Neb., so stubborn Woody starts walking.

David, a stereo salesman whose girlfriend has left him with little to lose, reluctantly decides to drive his father the 800 miles to Lincoln, hoping they can make peace with each other before the loveless old man slips around the bend. Instead they end up in Woody’s former hometown of Hawthorne, Neb., where his extended family and former friends want a piece of his presumed fortune.

One of the best films of the year, the deadpan comedy “Nebraska” was directed by Alexander Payne, an Omaha native who returns to his home state after award-winning detours to California (“Sideways”) and Hawaii (“The Descendents”). As in “About Schmidt,” an old man’s road trip becomes a journey of awakening, although Woody’s is slower and sadder. Dern, typecast as a villainous psycho for much of his movie career, appears shockingly old and addled, but that’s just acting, and when the character gets a few beers under his belt, he is lucid and direct, admitting his infidelities and vices.

Yet a saving grace of this potentially bleak film is that Woody is not quite as monstrous as he seems, and it’s his neglected family that peels away the layers of calloused old skin. When the vultures circle, Katie is his feistiest protector.

Squibb is from Vandalia, Ill., and she’s so effortlessly profane and funny that if you didn’t remember her small role as Jack Nicholson’s wife in “About Schmidt,” you might mistake her for one of the many nonactors who give the film such an authentic small-town flavor.

Forte is an alumnus of “Saturday Night Live,” but here he’s essentially the straight man to Dern. Likewise, Bob Odenkirk plays it straight as David’s marginally more successful brother, but the two comedians get to engage in some life-affirming antics before the story’s pitch-perfect finale.

A co-star deserving special mention is Nebraska itself, which Payne films in black-and-white to mirror the austerity of life on the de-populated prairie. These corners of the Cornhusker State are as empty as the promise of a sweepstakes prize. In this land of ghosts, one old pioneer tries to grab his stake before he becomes another windblown husk.

What “Nebraska” Three and a half stars out of four • Rating R • Run time 1:55 • Content Strong language

This image released by Paramount Pictures shows Bruce Dern as Woody Grant, left, and Will Forte as David Grant in a scene from the film "Nebraska," about a booze-addled father who makes to Nebraska with his estranged son in order to claim a million dollar Mega Sweepstakes Marketing prize. (AP Photo/Paramount Pictures)

Bruce Dern and Will Forte play a father and son in "Nebraska." (Courtesy Paramount Pictures/MCT)