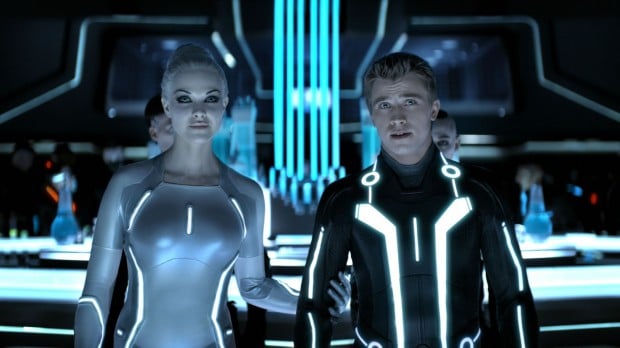 I don't know a joystick from a jalopy, so if a movie is trying to replicate the experience of playing a video game, I'm not the best person to judge.

Strike 2: I've never the seen original "TRON," which was a costly flop in 1982 but has developed a cult following. So I say this as an admittedly rather old newbie: The long-delayed sequel "TRON: Legacy" looks cool (as in cold), but it's about as much fun as being a barrel in a game of "Donkey Kong."

From what I've read on papyrus scrolls, the original "TRON" was about a computer programmer named Kevin Flynn (Jeff Bridges) who invents and enters a video game in which motorcyclists race to the death along a grid pattern. In this sequel, Flynn's now-grown son Sam (Garrett Hedlund) laments the loss of his father, but he'd rather race his (real) motorcycle than run the family business.

But then a mysterious message on an antiquated pager directs Sam to his father's abandoned video arcade, where '80s arena rock is still thumping behind the locked doors. There, Sam is zapped into the virtual grid and hurled into a cutthroat game of frisbee jai alai — the first of many challenges against cyber foes in color-coded latex suits.

Presiding over the games is an overlord who looks like a young version of Sam's father but actually is CLU, a computer program that craves perfection. (Note to Hollywood: The age-reversal trick is not quite ready for its close-up.)

Sam is rescued from the cyber samurai by a racer babe named Quorra (Olivia Wilde). She takes him to the minimalist man-cave of her master (in both the boss and the Buddhist sense): the now-aged Kevin Flynn (Bridges), who has been imprisoned in the virtual world by his creation CLU.

The father-and-son reunion ought to be the emotional crossroads of the story, but debut director Joseph Kosinski zips right past it. He also fumbles a David Bowie-esque performance by Michael Sheen as the grid's Mr. Fix-It and allusions to movies from "Star Wars" to "The Big Lebowski."

Kosinski, whose background is in commercials, seems interested only in the 3-D special effects, blue decor and deafening techno soundtrack (by Daft Punk).

It's a triumph of streamlined design, but "TRON: Legacy" never enters the fourth dimension where it's worth a plugged nickel to humans.

Actor says he feeds off personal connection to director and subject of boxing movie.

Plenty of new choices at the theater this weekend

You can tell the holiday season is here when the local mutiplex features all new releases. Get the reviews of movies with Reese Witherspoon, M…

Jeff Bridges: The Dude takes on the Duke

Back with the sequel to ‘TRON,’ he saddles up in Coen brothers’ ‘True Grit’ remake.

Two and a half stars (out of four)