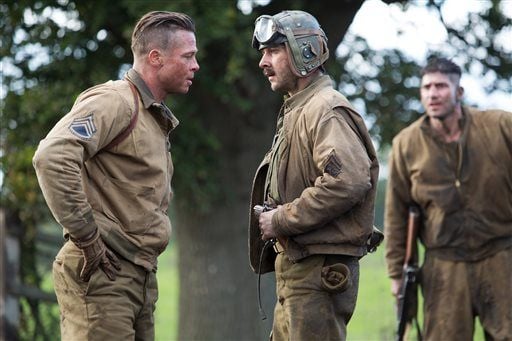 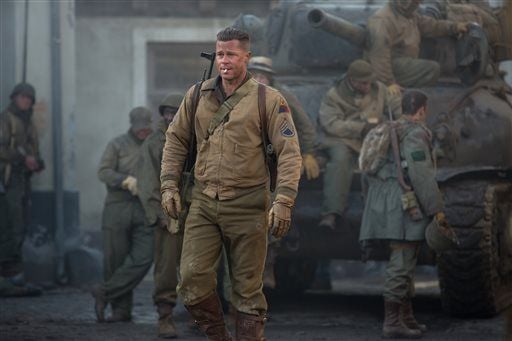 In the final days of World War II, tank commander Don “Wardaddy” Collier (Brad Pitt) and his men are on the move through Germany when a newcomer joins their ranks. His name is Norman Ellison (Logan Lerman), and he’s been trained as a typist — not an assistant driver. To make matters worse, Ellison’s hesitance to shoot at the enemy does not endear him to Wardaddy.

But it’s not long before Ellison abandons his idealism and begins firing away — which puts him on the same ideological page as Wardaddy, gunner Boyd Swan (Shia LaBeouf), loader Grady Travis (Jon Bernthal) and driver Trini Garcia (Michael Pena). Their goal of helping to ensure Allied success happily coincides with a more personal one: staying alive.

Unfortunately, the Germans are determined to keep fighting. And that means that an already bloody war has a chance to get even bloodier.

Written and directed by David Ayer, the tough but terrific “Fury” may remind moviegoers of Steven Spielberg’s “Saving Private Ryan,” another film that addressed the horrors of World War II. But Ayer, who made his name as a screenwriter (“Training Day”), takes an approach closer in sensibility to European than Hollywood filmmaking. If “Ryan” was something less than a rah-rah portrayal of war, “Fury” is even bleaker in its depiction of its dehumanizing effects.

In a strong performance, Pitt can’t help but bring to mind his turn in “Inglourious Basterds” as a character obsessed with “one thing and one thing only: killing Nazis.” But unlike Lt. Aldo Raine, who seemed to regard war as an absurd joke, Wardaddy stares it down with dead seriousness.

Lerman, perhaps best known for “The Perks of Being a Wallflower,” is empathetic as a man who must change to survive. And LaBeouf, who has recently attracted his share of tabloid attention, delivers one of his best performances.

“Fury” is a guided tour through a manmade hell.

What “Fury” • Three and a half stars out of four • Rating R • Run time 2:13 • Content War violence, grisly images and language

Movie Lounge: Murray is at his best in 'St. Vincent'