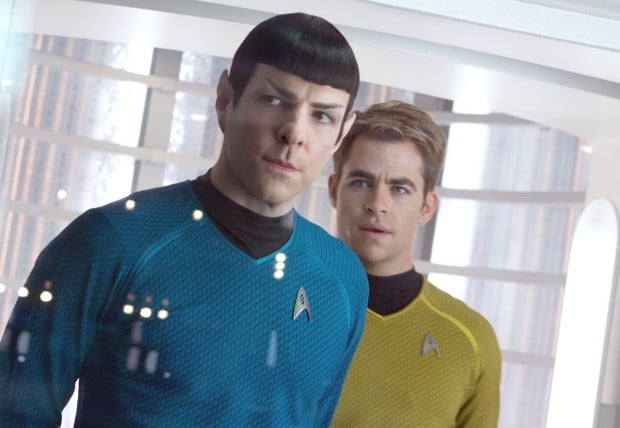 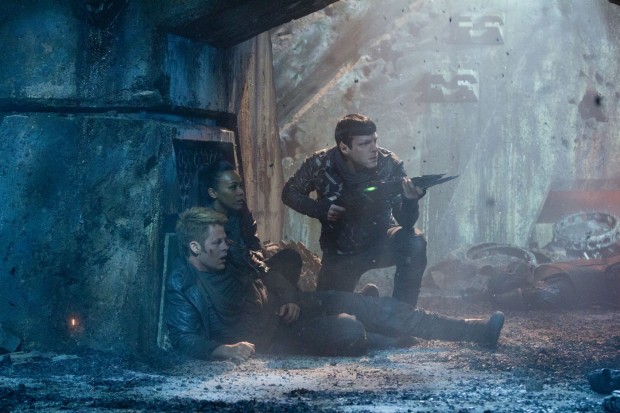 Chris Pine, Zoe Saldana and Zachary Quinto in a scene from "Star Trek Into Darkness" 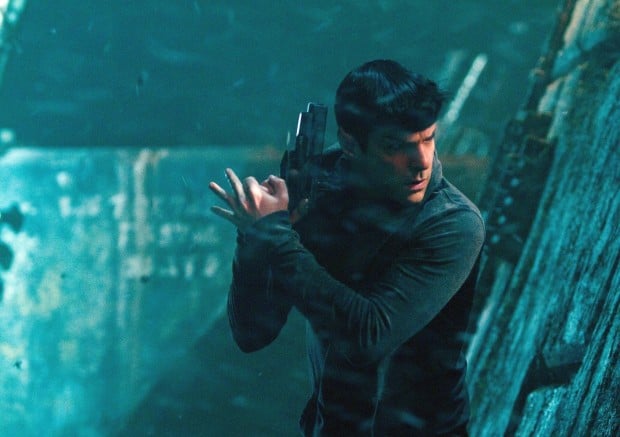 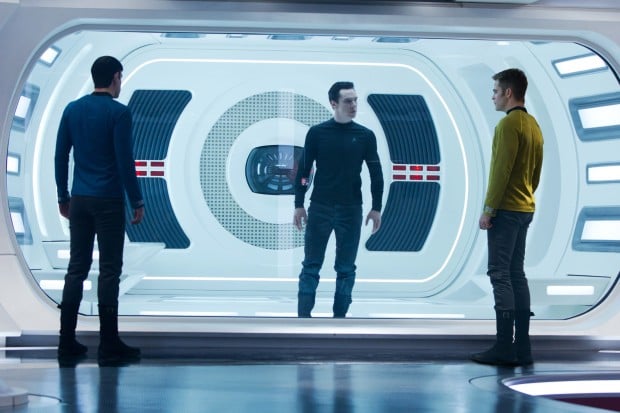 Expecting a “Star Trek” sequel to boldly go where no movie has gone before would be highly illogical. Although director J.J. Abrams took four years to map a follow-up to the 2009 revival of the sci-fi franchise, the steady helmsman stayed on course. Like its entertaining predecessor, “Star Trek Into Darkness” offers much of what the fans expect and not much of what they don’t. This character-driven vehicle is a supercharged example of cinematic craftsmanship.

His latest violation of protocol is revealing his 24th-century spaceship to the Stone Age inhabitants of a newly explored planet called Nibiru, thus potentially altering their evolution. As usual, the cocky captain has a good reason for breaking the rules — something about saving the life of half-Vulcan science officer Spock (Zachary Quinto) — but it’s not enough to keep Kirk from being briefly demoted.

Yet soon he is given a crucial assignment: capture a traitor named Harrison (Benedict Cumberbatch) who killed one of Kirk’s closest allies before fleeing to the Klingon planet of Kronos. When comic-relief Scotty (Simon Pegg) balks at the militaristic nature of the mission, Chekov (Anton Yelchin) inherits the red shirt of the engineer and the crew gets a mysterious new member (Alice Eve) who may know more about the super-human Harrison than she admits.

Like any good “Star Trek” story, this one raises timeless questions about the nature of good and evil, but not at the expense of entertainment value or character development.

Spock gets a lot of face time in this one, to develop his romance with the Klingon-fluent Uhura (Zoe Saldana) and his bromance with Kirk, whom he dares to call a friend in the movie’s emotional crescendo. And there are plenty of check-listed elements — including a troublesome tribble — from the original TV series and subsequent movies.

Yet Abrams has upped the pace and production detail like a warp-speed Spielberg. The sorcerer’s apprentice begins this 3-D release with a knowing nod to Indiana Jones and never loses control of the reins.

In our cynical stardate, it’s rare for a popcorn movie to deliver on its promises, but “Star Trek Into Darkness” is a generous enterprise.

What • “Star Trek into Darkness” • Three and a half stars out of four • Rating PG-13 • Run time 2:10 • Content Intense sequences of sci-fi action and violence

EDITOR'S NOTE: An earlier version of this story had an incorrect spelling of Chekov's name.

Three and a half stars out of four

These favorites were chosen by someone else. To choose your own, click:

Kirk's daydream about an old flame from his Academy days comes to life on the Shore Leave Planet.

A resentful former lover who tries to steal Kirk's body so she can take his place as captain.

A brilliant scientist who created the Genesis Device and the mother of Kirk's son David Marcus.

A brilliant scientist who remembers exactly how long ago her relationship with Kirk broke off.

Shaw is a Starfleet JAG officer who has to prosecute Kirk, her former lover, in a court martial.

Dagger of the Mind

Aliens use a device to cause Kirk to have powerful feelings for Noel, a psychiatrist.

The Conscience of the King

Kirk seduces actress Karidian to get to her father, who turns out to have been a brutal dictator. Lenore also turns out to be a crazy murderer.

The City on the Edge of Forever

After travelling through time, Kirk falls in love with this Depression-era social worker, but is forced to let her die to avoid changing history.

By Any Other Name

Kelinda is a Kelvan who has only recently adopted a humanoid body. Kirk teaches her about love.

Elaan is the "Dohlman" of the planet Elas. Her powerful tears cause Kirk to become infatuated with her.

The Gamesters of Triskelion

Shahna was Kirk's "drill thrall" on the planet Triskelion.

Marlena was a scientist and the "captain's woman" in an alternate-universe version of the Enterprise.

A beauty thanks to the Venus drug, McHuron is supposed to seduce Kirk, but she gets tired of all the lies.

Wink of an Eye

Queen of the Scalosians, Deela wanted to make Kirk her consort.

A shapeshifting telepath who trapped Enterprise crewmembers, Kirk tried (and failed) to seduce her to gain the upper hand.

The Mark of Gideon

Odona's father hoped she would contract a disease Kirk carried in his blood, and help to end overpopulation on their planet.

Nona tries to seduce Kirk in order to obtain phasers for her people, the Kahn-ut-tu.

The android Rayna self-destructs when she can't handle powerful new emotions awakened in her by Kirk.

While in an alternate reality, Kirk considers proposing marriage to Antonia instead of breaking up as he had done in real life.

Miramanee was a priestess for her people. She marries Kirk and gets pregnant, but is killed when the tribe later stones them.

Marta was one of those famous green-skinned Orions, and an inmate at an insane asylum. She tries unsuccessfully to seduce (and stab) Kirk.

What Are Little Girls Made Of?

Another android in whom Kirk awakens emotions when he kisses her.

Drusilla, a slave, is assigned to spend the night with Kirk to give him "some last hours as a man."

A 20th-century cetacean biologist who hitches a ride to the future with Kirk.

Fellow prisoner Martia offers to help Kirk and McCoy escape from a Klingon penal colony, but she's actually setting them up.

Kirk never settles down with anyone. Why? "I've already got a female to worry about. Her name is Enterprise."

Will Marcus and Kirk fall in love in this new film? Will they fight? Will Abrams kill her, too?

Who is your favorite Captain Kirk love interest?

Captain Kirk sure did get around - the galaxy, that is. With the opening of "Star Trek Into Darkness," we take a look back at the original Kir…

Captain Kirk sure did get around -- the galaxy, that is. With the opening of "Star Trek Into Darkness," we take a look back at the original Ki…

The TV show made its debut in September of 1966. How much do you know about the show?

Chris Pine, Zoe Saldana and Zachary Quinto in a scene from "Star Trek Into Darkness"