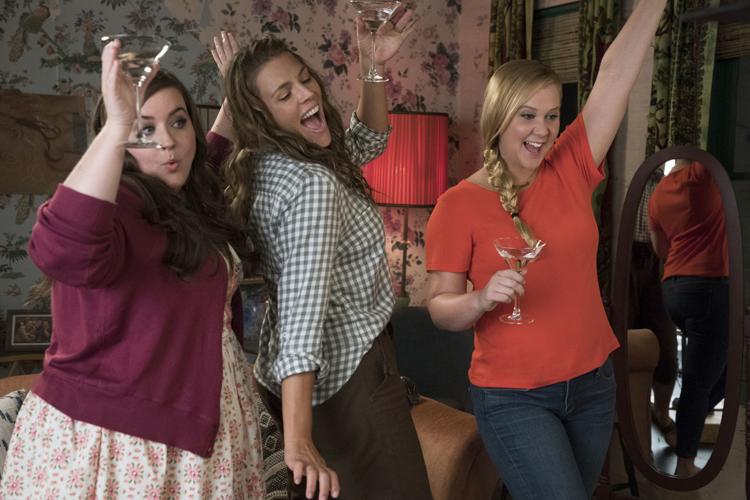 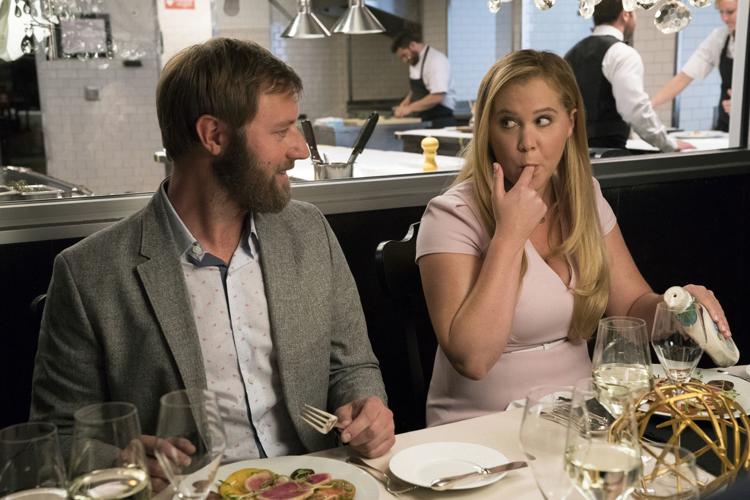 Amy Schumer, next to Rory Scovel, plays a woman who wakes up changed after a head injury. Mark Schäfer, STX Films

In the offices of a cosmetics corporation, physical beauty is not only preferred but virtually a requirement — which goes a long way toward explaining why Renee Bennett (Amy Schumer), an employee of the online component of Lily LeClaire, is stuck in an ugly room in a building far away from the action.

Renee’s less-than-supermodel looks would seem to doom her chances of rising in the company, which even insists on hiring receptionists who wouldn’t be out of place on the cover of Vogue. But something happens that could only happen in the movies: She gets a bonk on the head that changes her attitude — and her life.

Suddenly, Renee believes that she’s one of the world’s most beautiful women. Her friends Vivian (Aidy Bryant) and Jane (Busy Philipps) play along and hope that she comes to her senses. Everyone else assumes that Renee isn’t all there. But the funny thing is, her newfound confidence works for her.

Not only does Renee land a job as receptionist, but her energy and ideas also impress Avery LeClaire (Michelle Williams), daughter of company namesake Lily LeClaire (Lauren Hutton).

Renee is on the fast track. But how long can it last?

“I Feel Pretty” takes a while to get going, but it eventually finds its groove and proves to be an amusing showcase for Schumer’s talents. Her forte seems to be comic irony, and Renee’s situation plays to her strengths.

Indeed, Schumer deserves credit for selling the film’s thin and problematic premise. There’s no getting around the fact that this is a comedy about being delusional, and writer-directors Abby Kohn and Marc Silverstein have enough trouble just keeping the story going. Apparently, psychological nuance is not their forte, and they aren’t above resorting to toilet humor.

This film is unlikely to impress the Academy, but it’ll probably make you feel better about yourself.

“80 for Brady” has a case of “bad trailer,” and that the resulting film is funnier and more charming than expected.

It’s the delusions that are horrifying here — not the doomsday.

Review: ‘Turn Every Page’ a fascinating safari with literary lions

What happens when two geniuses in their respective fields engage in a sometimes contentious lifelong collaboration?

Review: ‘You People’ works better as rom-com than as examination of race relations

“You People” is only a so-so examination of whether Black and white people truly can live in harmony.

“Fear” is a COVID movie, and a contagion film, and a haunted house story rolled into 100 feverishly stylized minutes.

Amy Schumer, next to Rory Scovel, plays a woman who wakes up changed after a head injury. Mark Schäfer, STX Films