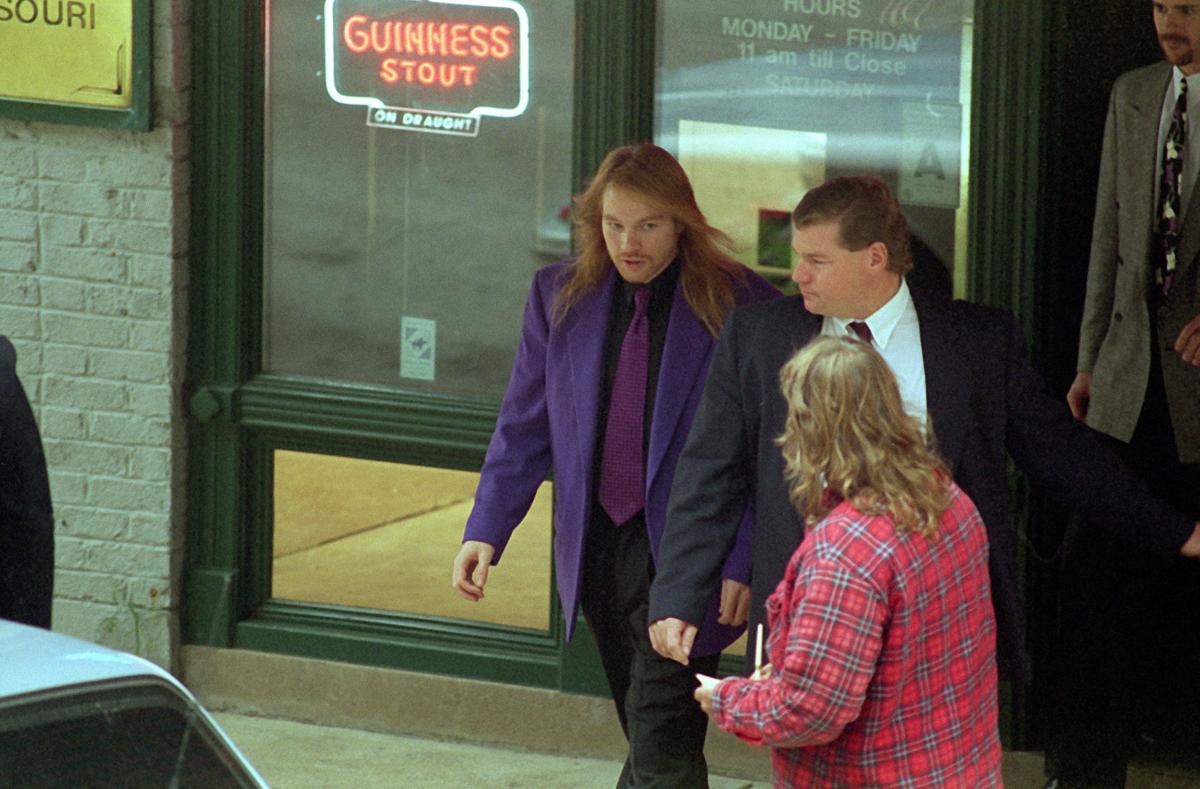 Axl Rose is seen leaving a St. Louis, Mo., restaurant, Oct. 18, 1993. Rose, leader of the rock band Guns N' Roses defended himself in court against a fan who says the rock star punched him when he jumped off the stage during a July 1991 concert in St. Louis. (AP Photo/Mary Butkus) 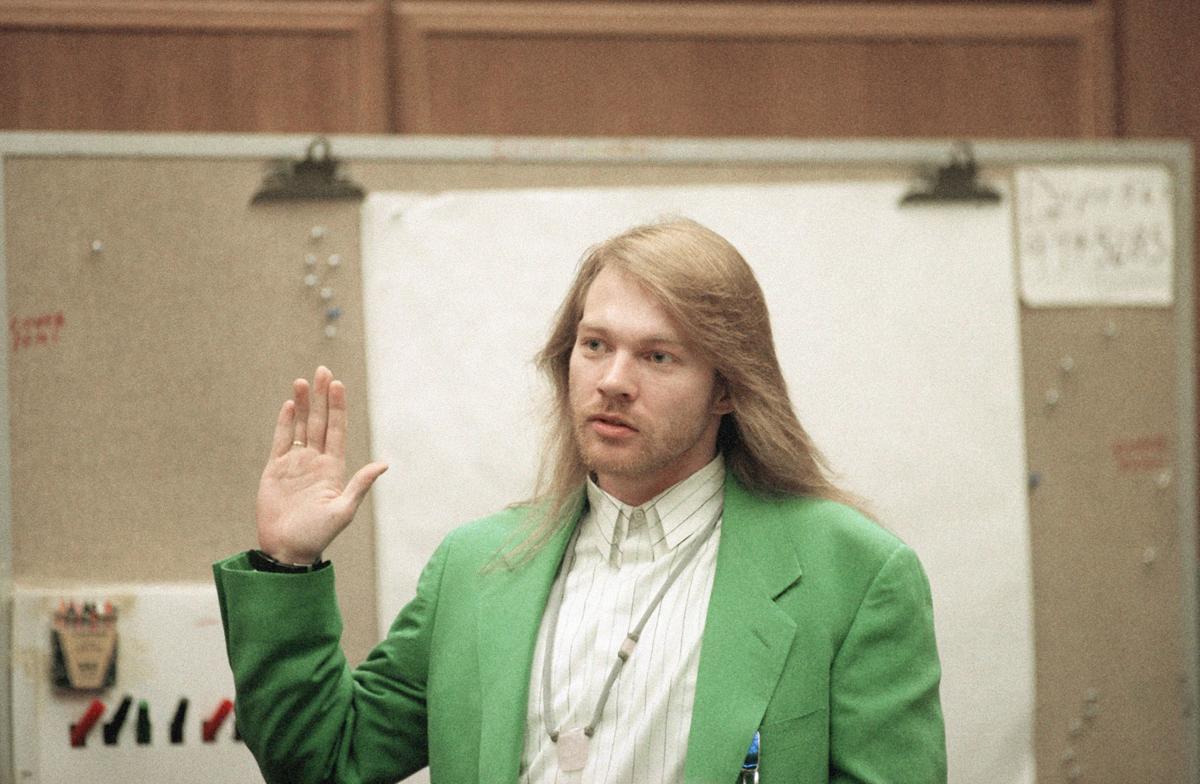 Guns N' Roses lead singer Axl Rose takes the Oath as he takes the witness stand in Los Angeles, Calif., Monday, Aug. 23, 1993, during the Superior Court lawsuit brought by the band's former drummer, Steve Adler, against the band. Adler alleges that the band members tricked him into signing away millions of dollars of profits before kicking him out of the band in 1990. (AP Photo / Nick Ut) 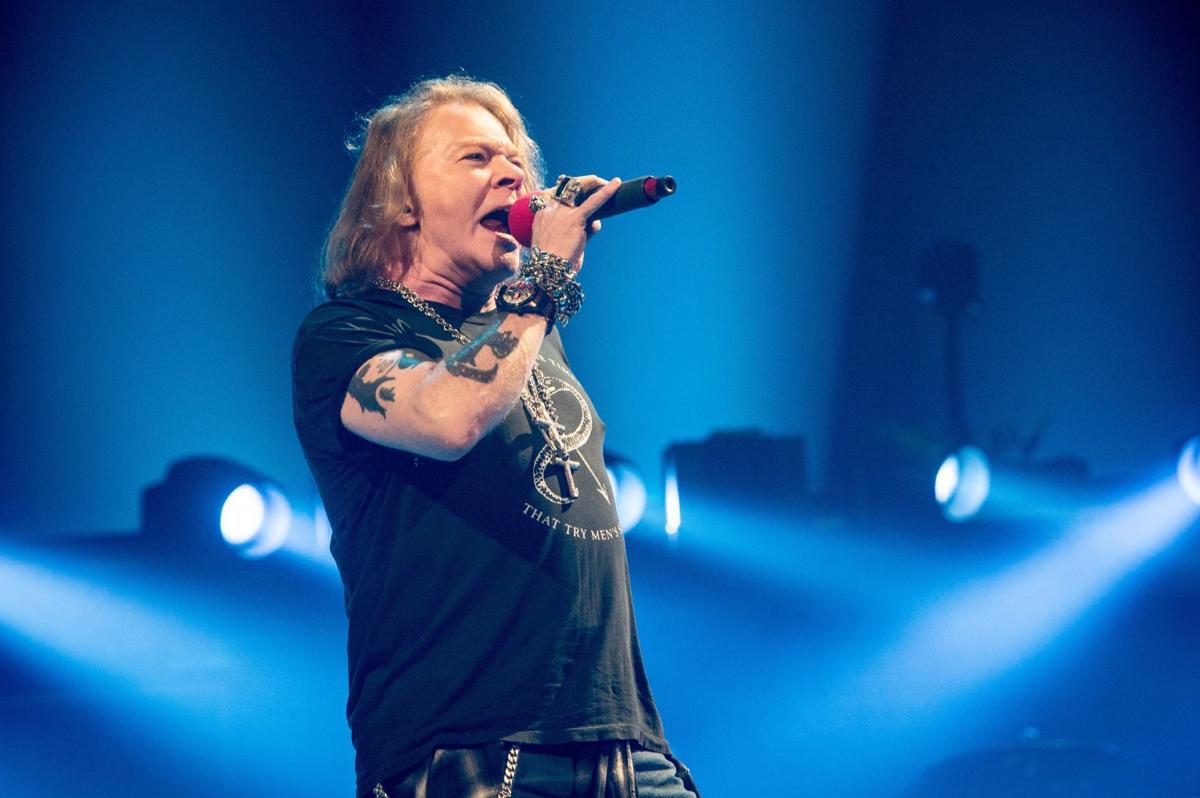 The last time I saw you, I was in the eighth row — what was left of it — at what was once called Riverport Amphitheatre. You were in the crowd, too, six or seven rows ahead of me, starting a fight with a motorcycle gang.

I think we can both agree that that is never a good idea, right?

Since we’ve never had the opportunity to talk, I wanted to write a note just to say thanks, because that night — as crazy and dangerous as it was, with all the injuries, destruction of property and psychic damage it wrought on your St. Louis fans and the city in general — was a great night for me.

At the time, I was an arts editor at the Riverfront Times and attended along with Thomas Crone, one of our staff writers. I wasn’t even covering the show, per se, but something told me I should be there and that I should bring along a reporter’s notebook, as well.

Those are common instincts for journalists, of course. Showing up is 80 percent of life, as Woody Allen reminds us. And though I was never a Boy Scout, I’ve always taken their motto, “Be prepared,” as gospel.

When the [stuff] hit the fan, though, and the concert erupted into a riot, the thing I was not ready for — because who would have expected it? — was that Crone and I would simply hang in there and report the story. Other journalists fled, leaving us as the only reporters on the inside of a major story that was unfolding right in front of us.

I can still remember certain details vividly: rioters swinging from cables under the light and speaker rigging on the stage, the sound engineer warning me there would be “massive death” if it fell down; police trying to hold the stage by shooting a fire hose at the crowd, though it lacked sufficient water pressure; a man jumping into the stream, then pulling down his pants and waving his penis at the cops.

There were other things, too: a man with a gash on his shoulder and blood on his face running madly up the aisle; another, his head strapped down, being carried out on a stretcher; Crone being viciously jabbed in the kidneys by police trying to clear the lower bowl as I shouted that we were members of the press.

The cops’ response was a string of vulgarities unfit for publication — here, anyway.

“That’s nice,” another said, as they dumped us down a steep staircase.

He was right. It was nice, though it didn’t really seem so at that moment.

Because the RFT was a weekly newspaper — still is — and I’d have nowhere to publish my account of the riot until days later, I spent the rest of that night calling everyone I knew at Rolling Stone, MTV News and other media outlets. Breaking news just wants to be free, but this was in the pre-internet, pre-cellphone era, and I couldn’t just put it out there on social media.

In a long and convoluted way, which I won’t trouble you with here, I can say that the fact of my staying on the case that night and then fighting so hard to get the story out led to pretty much everything that has followed for me — a job editing a music magazine, writing books, doing radio and continuing to cover music even to this day. It’s been great.

What have you been up to since that time?

On the upside, I do have to say congrats for getting St. Louis’ own Richard Fortus in the band. He’s one of the best, which is something we knew even before you did. Well done.

And Tommy Stinson! A rock ’n’ roll hero if there ever was one. I’m sad he’s no longer with the group, but I was always glad to see him get a regular check courtesy of you. He deserved it.

Also, I’m glad to see you’re back with Slash, Duff, Dizzy and the other guys. This is how it should have been all along. There’s no recapturing those wasted years, but there’s still now, and we have to do the best we can with that, right?

I do have to say we’re still a little sore about that “(Expletive) you, St. Louis!” that you put in the liner notes of “Use Your Illusion.” But at the time, the feeling was probably mutual. So let’s just forget about that.

Meanwhile, welcome back to town. I trust the same thing won’t happen again. I know you said back in ’91 that people were throwing bottles at the band, and that’s what upset you. Fair enough. But it was someone taking pictures with an instamatic camera — remember those? — that actually set you off, and that’s why you dived into the crowd and started a riot.

Daniel Durchholz is a freelance music writer in St. Louis.

St. Louis media got an early inside peek of Guns N’ Roses’ “Not in This Lifetime” tour coming to the Dome at America's Center Thursday night, …

Fortus lives in unincorporated St. Louis County with his wife and two daughters.

From the archive: The night Axl Rose tore up Riverport

Axl Rose is seen leaving a St. Louis, Mo., restaurant, Oct. 18, 1993. Rose, leader of the rock band Guns N' Roses defended himself in court against a fan who says the rock star punched him when he jumped off the stage during a July 1991 concert in St. Louis. (AP Photo/Mary Butkus)

Guns N' Roses lead singer Axl Rose takes the Oath as he takes the witness stand in Los Angeles, Calif., Monday, Aug. 23, 1993, during the Superior Court lawsuit brought by the band's former drummer, Steve Adler, against the band. Adler alleges that the band members tricked him into signing away millions of dollars of profits before kicking him out of the band in 1990. (AP Photo / Nick Ut)